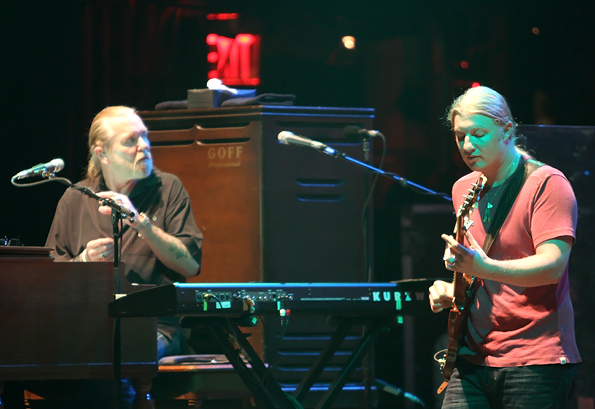 The Allman Brothers Band have announced dates for their annual March run at New York’s Beacon Theater. Ten shows are slated to kick off March 9th and run through March 25th, but more dates may be added if they sell well (tickets go on sale January 6th). According to a press release, the Allman Brothers have dubbed 2012 “The Year of the Peach” in celebration of the 40th anniversary of their live album Eat A Peach. The group will receive a Grammy Lifetime Achievement Award on February 11th.

The Allman Brothers have played a run of shows at the Beacon in March almost every year since 1989. They had to cancel it in 2008 while Gregg Allman received treatment for hepatitis C. The next year they celebrated their anniversary by playing a 15-night stand at the New York theater honoring the late Duane Allman, featuring appearances by Eric Clapton, Buddy Guy, Bob Weir, Phil Lesh, Levon Helm and many other superstars. In 2010 the Cirque de Soleil took over the Beacon for their ill-fated Banana Shpeel show, forcing the Allman Brothers 100 blocks uptown to the United Palace Theater. The move had an incredibly detrimental effect on sales, and the group was forced to cancel five shows, which they pinned on a “family emergency.”

They returned to the Beacon last year. “We’re back at home now,” Gregg Allman told Rolling Stone at the time. “I don’t think they’ll ever put us out again. I think we got some kind of paper that says they won’t do it.”

The band won’t be alone at the Beacon this spring. The Grateful Dead offshoot band Furthur booked eight shows at the venue in April. There’s almost certainly enough fans of both groups in the area that both will sell out all of their shows.