First things first: Alkaline Trio opened its 38-date American tour last night at the Observatory in Santa Ana, California, and did not play “Radio.” To the uninformed, that’s like the Stones leaving “Satisfaction” off the set list or Black Sabbath forgetting to play “Iron Man.”

Not only is “Radio” Alkaline Trio’s best song, it’s arguably one of the best tracks to emerge from the post-Nirvana indie/punk world. The four-minute-41-second tune, which closes 2000’s Maybe I‘ll Catch Fire, is almost always the guaranteed set closer. Except for last night, when singer-guitarist Matt Skiba, singer-bassist Dan Andriano and drummer Derek Grant finished their 85-minute show with “’97.”

Photos: Alkaline Trio Behind the Scenes

There’s nothing wrong with “’97.” In fact, it’s a powerful song that found Skiba ditching the relaxed vocal approach he’d taken the entire evening in favor of his patented guttural screams. By the time he got to the end of the tune, when he belted out the words “I don’t deserve this,” you could just feel “Radio” coming next. With his anger firmly in place, Skiba – and perhaps more importantly, the crowd – was ready to yell the anthemic, “I’ve got a big fat fucking bone to pick/With you my darling.” 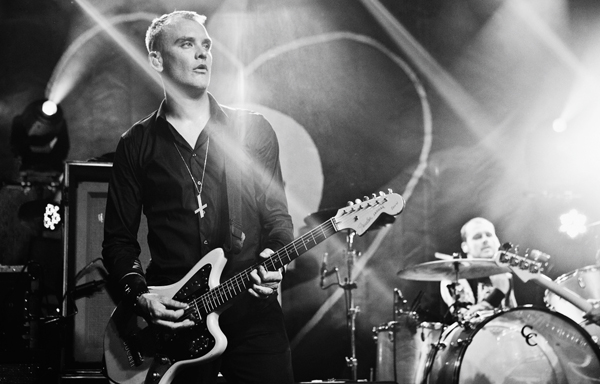 Except that didn’t happen. Instead, the lights came on, the house music played, the band shook hands with the crowd and everyone went home. Without hearing “Radio.”

Such is the life for a group like Alkaline Trio, who have managed to become elder statesmen of their punk/pop genre thanks to nine full-length records and a handful of EPs and singles. With so much material to choose from, certain songs are bound to be left off set lists. Last night was no different, as classics “Clavicle,” “Bleeder” and “Nose Over Tail” were noticeably missing.

However, that’s not to say the show was a disappointment, as the absence of classic material made room for songs from the group’s latest, My Shame Is True, released earlier this month on the band’s Heart & Skull and Epitaph Records. The band opened with the first two tracks from Shame, “She Lied to the FBI” and “I Wanna Be a Warhol,” before diving into “All on Black,” “If We Never Go Inside” and “Donner Party (All Night)” from 2003’s Good Mourning.

Before “Donner Party” Skiba told the crowd, “Let’s see if I can remember this song.” Afterwards, he said, “I remembered about 85 percent of it.”

Other new songs included “I’m Only Here to Disappoint and “The Temptation of St. Anthony,” along with “Balanced on a Shelf,” found on both the deluxe edition of My Shame is True and the Broken Wing EP. 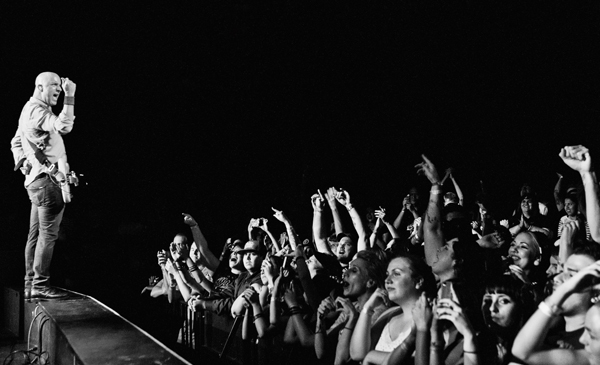 The two songs played from 1998’s Goddamnit – “San Francisco” and encore opener “Cringe” – got the crowd to throw their hands in the air and sing along with the conviction that comes from being not just a typical fan, but someone who is passionate about music. Much of the audience, comprised of teenagers and twentysomethings, sang along with Skiba as he began “Cringe”: “Wide eyed/Knee deep in surprise/Just below your thighs, the temperature drops five degrees.” For one of the few times in the evening, the singing from the crowd drowned out the band. This also happened during “Crawl,” in which Andriano sang, “Never had a drink that I didn’t like/Got a taste of you/Threw up all night.”

Inside the Observatory is a smaller venue called the Constellation Room, where a four-piece group from Orange County called the Aquadolls performed while New York’s Bayside played on the venue’s main stage. No more than 30 people heard the Aquadolls’ blend of surf-pop-meets-the-Cramps, which is a bummer, because the group was fun, a key ingredient in any good rock & roll band. No Aquadolls member appeared to be older than 22, and their youthful exuberance was on display when the guitarist did a funny crab dance in the middle of a song, and when the singer told a heckler, “Dude. Chill.”