There were record companies, and then there was Warner Brothers. During the halcyon, Wild West days of the music business in the Sixties and Seventies, Warner Brothers — along with its associated labels like Reprise and Sire — earned a reputation for signing some of pop’s most idiosyncratic or unconventional artists. But even better, the label — and executives like Mo Ostin, Joe Smith and Lenny Waronker. — allowed those musicians the freedom to roam and grow in the studio with few artistic constraints. Jimi Hendrix, Joni Mitchell, Neil Young, Van Morrison, the Grateful Dead, and Randy Newman were among the label’s first wave of talent, followed in later years by Prince, Madonna, Van Halen, Devo and the post-indie Replacements.

Alice Cooper on One-Year Anniversary of Hot Sauce Launch: 'We Keep it Rock and Roll'

The result wasn’t just a mind-boggling string of classic and often groundbreaking music but also plenty of profit to go around — and plenty of ways to spend it and revel in the excesses of the times. In this excerpt from Peter Ames Carlin’s Sonic Boom: The Impossible Rise of Warner Bros. Records from Hendrix to Fleetwood Mac to Madonna to Prince, the label — especially head publicist Bob Regehr working with band manager Shep Gordon — decides to go all out to launch a new band called Alice Cooper in 1971. The gorilla suits alone make us nostalgic for a long-gone aspect of the business.

Alice Cooper, a five-piece hard rock band known for its cross-dressing, horror movie villain–style front man (who later took the band’s name as his own), had been a tough sell for its first couple of years in the Warner/ Reprise family. Signed by Frank Zappa for his Warner-distributed Bizarre/ Straight label, the band’s first two albums bombed, due in part to Zappa’s disinterest in them. The band didn’t help itself the night Gordon corralled a group of Warner/Reprise executives to their show at the Whisky a Go Go and, amid the band’s lackluster set, the drummer managed to fall off the stage. A terrible show.

But Gordon, all of twenty-two, was convinced his group was bound for stardom, so when they were offered an opening spot on a national package tour in the summer of 1970 only to be denied the tour support money they would need by Zappa’s partners at Bizarre/Straight, the manager decided to take his case to the central office on Warner Blvd. Gordon gathered the group, bought a few sacks of tacos on the way to Burbank, waited until Joe Smith had gone out to lunch, then rallied his troops to invade the label president’s office, where, with their large and odoriferous lunch in hand, they stretched out on his chairs and sofas to wait. When the executive got back, Gordon greeted him at his door and introduced himself. He and his entire group were staying put, he promised, until Smith came through with the cash they needed to go on their summer tour. Or else, Gordon continued, Smith could always call the police and have them thrown out. But then the matter would be in the public record, and did Smith really want to read news stories about how he’d had one of his own bands tossed out of the building? Smith gave this some thought and then nodded. “You’ve got balls,” he told Gordon, with new respect in his voice. “Come with me.” Smith led the manager down to the finance office and told them to cut the check.

The tour went well, and given the dough to produce a new single, the band came up with the rocking but tuneful “I’m Eighteen,” a tale of adolescent frustration that scraped against the Top 20 on Billboard’s singles chart. Reassigned from Bizarre/Straight to Warner/Reprise, the group saw their third album, Love It to Death, climb to No. 35 in March 1971. In it, the band traded its psychedelic influences for a crunchy hard rock sound that, along with its comic book horror, satire, and some distinctive sexual transgression, put them at the fore of the blossoming glam rock genre.

It was a potent combination, but how could Warner/Reprise distill its essence into a promotional campaign that would grab the media by the ear? This was a problem Bob Regehr was uniquely equipped to tackle. Hunkered together in his office, Regehr and Gordon fell into a brainstorming session that began with the idea of throwing a debutante ball for the Alice Cooper character at the elegant Ambassador Hotel, where all the best Los Angeles families celebrated the launch of their daughters’ social lives. The Ambassador’s managers would never allow it if they knew what the event was actually about, so Regehr asked his assistant, Shelley Cooper, who had the most proper voice and attitude in the building, to deal directly with the hotel.

No one was to give any hint that the debutante in question was actually one of the freakiest rock & roll bands currently in existence. To make certain that Mo Ostin and Joe Smith attended, Regehr scheduled the affair for the evening of July 14, so it could double as a fete for Evelyn Ostin’s birthday. Did they know July 14 was also Bastille Day in France? They didn’t, but they tossed that in, too, because why not? Then, with all that figured out, they got to work on the details. And this was where things got interesting, and expensive. After the bills topped seven grand, a massive amount for a single event in 1971, a very concerned Smith came to ask what the hell they were up to. Regehr gave him some kind of reasonable explanation, then told Shelley Cooper to stop sending the invoices to the finance office until after the party was over. “If it’s a success, they won’t care,” he explained to her. “If it’s not, then we’ll all be fired anyway.”

They hired a traditional dance band to play standards, procured an oversize wedding cake designed to have someone pop out of it, rented a pair of gorilla suits, and hired, among other entertainers, a dog trained to do things dogs don’t do, a three-hundred-pound singer/stripper named TV Mama, and an entire troupe of dancing drag performers from San Francisco known as the Cockettes. They then sent engraved invitations to hundreds of industry and media figures, asking that they dress formally, or “appropriately,” which could, and did, mean many things to the many people in the Warner/Reprise sphere. 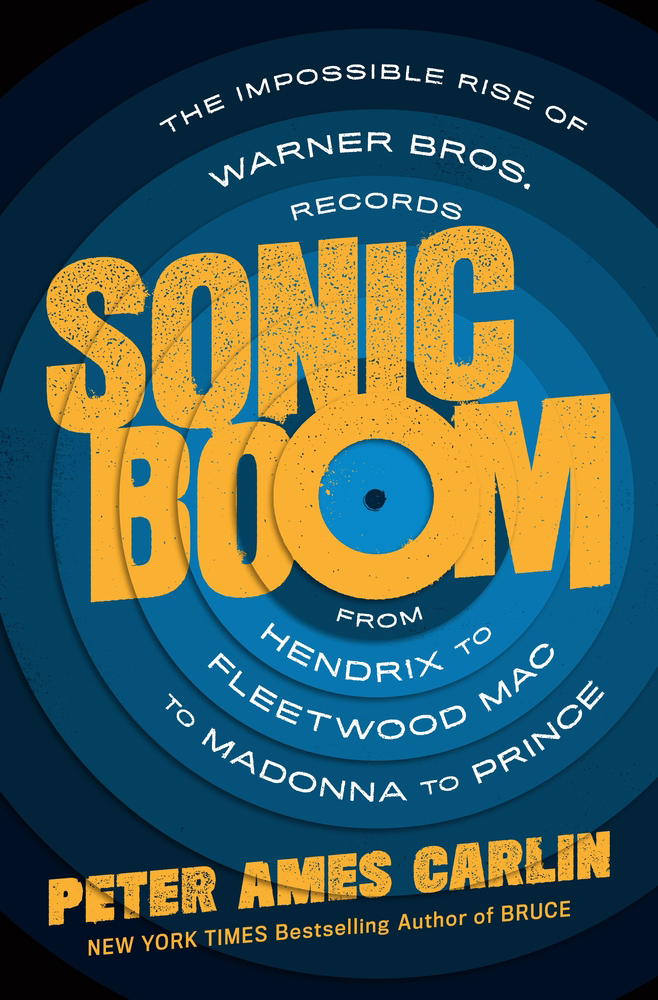 Regehr had specified that their debutante, young Miss Cooper, would prefer a room bedecked with chandeliers, so the Ambassador’s managers put the affair into the regal Venetian Room. When the evening arrived, some guests arrived clad in tuxedos and gowns, others in suits or cocktail dresses, and still others in worn denim cutoffs and midriff-baring halters. The actor Richard Chamberlain was there, along with the pop poet and Warner Bros. recording artist Rod McKuen, Randy Newman, Gordon Lightfoot, Steppenwolf ’s John Kay, Donovan, Cynthia Plaster Caster, and a handful of the company’s other acts, along with dozens of writers, reporters, critics, and industry figures.

The gorilla suits were assigned to two waiters, greeting the guests with silver trays of hors d’oeuvres, which some nibbled as they found their way to one of the many open bars scattered around the room. The Edward Gould Orchestra played sprightly versions of “Moonglow,” “Somewhere My Love,” and other dance favorites as couples gamboled before them. When the appointed time arrived, the entire crowd gathered in the main lobby, much to the astonishment of the chiffon-clad society dames and tuxedoed gentlemen bound for other affairs. Gould’s band struck up “Pomp and Circumstance” to kick off the procession.

First came the Cockettes, a dozen heavily made-up men in spangled dresses and plus-size high heels. One was dressed as a nightclub cigarette girl with a shoulder-strapped tray bearing cigars, cigarettes, and tubes of Vaseline. Next came the dog walking on its hind legs and pushing a baby stroller with its front feet. He might have been wearing a party hat; memories differ. TV Mama, the three-hundred-pound singer/stripper, came next, in a silky, white fur–lined black gown cut to feature her prodigious assets. Finally came Alice Cooper, the five band members clad in tuxedoes, one set off by his caked-on mascara, streaks of rouge, and heavily powdered cheeks, grasping one of the long-stemmed roses being scattered in front of and over him.

Then the real revelries began, fueled by the sloshing open bars and whatever was causing all that snorfling and snuffling in the bathrooms. Mo and Evelyn Ostin arrived along with Joe and Donnie Smith, Ahmet Ertegun, and whomever he was dating in Los Angeles at the moment. Evelyn’s arrival triggered a chorus of “Happy Birthday,” led by TV Mama, who pressed in to sing, shake, and shimmy her assets as close to the birthday girl’s personal space as possible.

When that ordeal was over, Evelyn grabbed Joe Smith’s shoulder and shouted in his ear, “Are we supposed to be here!?”

Smith shouted back, “Where else in the world would you rather be!?” Whatever Evelyn said in response was lost when the oversize birthday cake at center stage blew its top. Miss Mercy, the GTO band member they’d installed in the cake’s inner compartment, had gotten sick of waiting for her cue and came exploding upward wondering, at the top of her lungs, what the fuck she was doing in there. Then she started scooping up handfuls of frosting and hurling it at the guests, many of whom hurled it right back at her. Alice Cooper played a short set, and as the clock spun to midnight and beyond, a laughing mayhem prevailed. The poet McKuen, a tumble of silver hair, aquiline nose, and bespoke tuxedo, climbed onto a table and started dismantling one of the chandeliers piece by crystalline piece, while the Cockette cigarette girls returned with trays overflowing with multicolor dildos, many of which were carted away by frisky couples eager to take a test drive. And somewhere out of sight, a Cockette had traded her gown for one of the gorilla suits, in which she scampered out of the hotel’s main entrance and was last seen on the Sunset Strip galloping into the dawn.

When Regehr got back to the office late the next morning, his desk fluttered with angry messages from the manager of the Ambassador Hotel (You broke our chandelier!), from the costume rental company (You stole our gorilla suit!), from the hotel manager’s boss (You shattered our dignity!), and a few others. But these were overwhelmed by messages about the avalanche of Alice Cooper coverage the party was spurring. The Los Angeles Times planned an A-1 feature for the next Sunday. The wire services spread the story into newspapers all across the country, while industry magazines cranked out their own party tales, all celebrating how Warner/Reprise had launched another hit act.

The tsunami of publicity swept the three-month-old Love It to Death album back up the charts, where it remained for the rest of the year on its way to selling 1.2 million copies. Killer, released around Thanksgiving, climbed to No. 21 on the album charts. The group’s next single, “School’s Out,” jumped into the Top 10 in May, tugging its album, also named School’s Out, released a month later, to No. 2 on the album charts and more than a million copies sold. As Regehr predicted, no one ever asked how much the party cost.