The most influential DJ at this weekend’s Electric Daisy Carnival in New York opened the festival’s mainstage early on the first day: It was the French producer Cedric Gervais, whose 2012 hit “Molly” has inspired a catch phrase emblazoned on thousands of t-shirts across the parking lot of Citi Field, the home stadium for the Mets. “Have you seen Molly?” the song goes. “She makes me want to dance.” Much more than a cheeky request for MDMA via a garment purchasable from the Shore Store, it embodied the zeitgeist – not just that of the largest electronic dance music festival in America, but of the party generation. Rave culture has taken over this generation full bore, and the kids are so invested that thousands of young women hot-glued their bras with rhinestones, glowsticks and silk daisies, clearly prepping for this experience for weeks. Rare was the beefed-up bro not emblazoned in some kind of neon, making eyes at said bras while working on their Melbourne shuffle. This was Spring Breakers, Queens edition.

It goes without saying that dance music festivals Stateside are finally catching up to their European counterparts – this year, each leg of the two-day Electric Daisy Carnival New York attracted 50,000 people, paltry compared to the sold-out 325,000 who will descend on Vegas when the main festival hits in late June. Even so, the vastness of the experience was impressive and, at times, overwhelming, blanketed across four stages, a clutch of carnival rides, dazzling fireworks displays, and technicolor light installations, including the fest’s signature LED daisy the size of a tract house. (The Citi Field parking lot is huge!)

Electric Daisy Carnival Coming to London
The two massive main stages were situated adjacent to each other with a ferris wheel and a Zipper ride wedged between. The first night, anyone (everyone) attempting to see simultaneous sets by house heavyweight Eric Prydz versus Swedish House Mafia mastermind Steve Angello got smooshed into a giant, disorienting rave pit. If any of those T-shirt kids ever found Molly, they surely lost the rest of their friends in the crush. But if they stood at the right spot at the bow of the ferris wheel, they could hear both stages at the same time, the speakers sending .wavs across the asphalt (which is, apparently, a great sound conductor). It was a perfect confluence of thump, where it almost didn’t matter if their sets were indistinguishable – most were lost in the ecstasy of the moment. 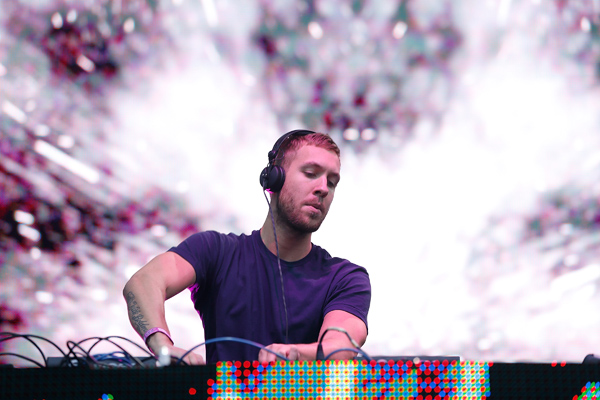 Still, several of the main-draw headliners proved their mettle. British producer Calvin Harris showed why he is such a force in the pop world, blending a crowd-pleasing set that included Basement Jaxx’s “Where’s Your Head At,” Justice’s “We Are Your Friends” and his own “Flashback” – three songs released in the 2000s, practically relics at this point, yet the young-twentysomething-skewing crowd sang along gamely. (He didn’t make anyone wait for the megahit he made for Rihanna, “We Found Love,” dropping it about a quarter-way through to a stadium’s worth of squeals.) Harris’ harder counterpart in the pop world, ubiquitous Dutch producer Afrojack, crescendoed-and-dropped his crowd to submission before toning it down to a little piano set. “This is the best fucking EDM scene on the whole fucking planet!” he effused, keys twinkling. At a farther-flung stage beneath a tent, the British house icon Carl Cox played an understated set with a deft hand, hewing to gradual vibe creation rather than the power of the drop – music for dancers with attention spans.

But it took performers on the smaller stages to show how diverse America’s new ravers are, while making a good argument against using the term “EDM” – electronic dance music – as a corporate catch-all. Los Angeles dubstep god 12th Planet made a case for “trap rave” as a vessel to get dance kids to listen to rap music, blending hits like Ace Hood’s “Bugatti” into tasteful dubstep bass and post-Lex Luger triple-time beats. Seth Troxler, the Michigan-born house DJ, played a sophisticated set of minimal techno with a serious mid-range groove, while the DC duo Nadastrom blended their signature moombahton set with nods to dembow and even bhangra, up to and including a tweaky bass version of Elvis Crespo’s “Suavemente.” And when DJ Fresh played dead prez’s “Hip-Hop” over a corpo techno track, was it a referendum? Nope, it was just a segue into a trap song, exemplifying the jumble of music that occurs at Electric Daisy Carnival. His set, especially, was all over the map, but he tied it together at the end with a surprise guest – rapper Dominique Young Unique, performing a live version of their track “Earthquake.”

Several performers weren’t DJs at all, but bands, and had to use their creativity to fit in at a festival where rock music is an anomaly. Australian duo Empire of the Sun channeled Bowie with gold sequins and glowing neon guitars, while Italian producer Bloody Beatroots blurred the lines between rave and metal, in the tradition of Atari Teenage Riot and, well, Skrillex before him. The birdlike young British singer La Roux, wearing a white trenchcoat and looking like she was born to play Tilda Swinton in a Funny or Die skit, surprisingly opened with her two biggest hits to date – “In for the Kill” and “Fascination” – before debuting three songs from her forthcoming album. “Kiss and Not Tell” was a pared-down, simple synth track with a big pop hook, while “Sexotheque” had a touch of Eighties-influenced new wave.

Raves and dance music have to battle bad reps as drug havens now as they did in the 1990s, and “Where’s Molly?” merchandise isn’t helping. But lest this weekend’s EDC seem like one orgiastic cuddle puddle, consider this: Smack in the middle of 12th Planet’s set, the New York sun gleaming on all the neon, a young man not older than 19, eating a strawberry fruit popsicle and wearing a T-shirt bearing the logo, “MUSIC makes me high.” The kid, grinning, screams, “I can’t believe this is happening right now!” The party culture may define the zeitgeist, but it’s always the music that matters most.