Aerosmith duets with Carrie Underwood for a country song on new album, “Music From Another Dimension.” - Rolling Stone
×
×

Bon Jovi already went Nashville a while ago, but is the world ready for a country-fied Aerosmith? That’s what they’ll be getting with a Steven Tyler/Carrie Underwood that appears on the group’s new album, Music From Another Dimension!, due in stores Nov. 6. Steven Tyler tells Yahoo! Music that he’s certain the song will be a radio smash.

But as much benefit as there might be to including a country power ballad featuring one of America’s most wholesomely leggy stars, how does that square with this comeback CD being touted as a return to seminal 1970s hard-rock form? After all, Tammy Wynette wasn’t making any guest appearances on Rocks, was she?

Apparently, there was a minority faction within the band that wondered that very thing.

Tyler told us how the duet spontaneously came about. In the recording studio, “I sang it a little country,” he recalls, “and one of the guys in the band said, ‘You know what, you need to re-sing it, because you’re singing it too country,’ and I said, ‘Well, that’s how I wrote it.’ Then Marti Frederiksen–who wrote it with me–and I were just talking about, ‘If it sounds like a country song, why not get one of them-thar people to sing on it?’

“So I called Carrie up, because she’s a friend of mine. She was in L.A. and was leaving the next morning, and I said ‘Get over here quick!’ And so Joe (Perry) was… I’m not sure if Joe was there; I called him up. But the rest was history. She sang on it and it’s just perfect. It’s one of those moments that just is. And because she did, will it be a hit? Positively. You f—ing think? She’s so big! And it’s not a bad song. That’s pretty cool, right?”

But didn’t we hear that not everybody in Aerosmith was quite so hot on this country coolness? 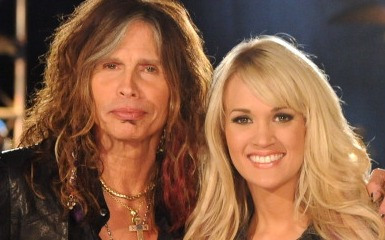 “There was a little bit of resistance,” acknowledges Brad Whitford, adding, “It didn’t come from me. But I heard it [from elsewhere in the band as] like, ‘Wait a minute–so this is an Aerosmith album, right? It should be all Aerosmith.’ But it’s like, wait a minute, do you have a problem when you listen to Bob Dylan’s record and this guy’s sitting in on guitar? No. It’s cool, right? If you’re in a position where you call up Carrie and she says ‘I’d love to come over,’ then f—in’ A! Those two voices together are absolutely mind-bending when they sing that thing. It’s like God was looking down and smiling.”

The pairing with Tyler didn’t come out of nowhere, of course: They’d done a duet of her “Undo It” and his “Walk This Way” on the 2011 ACM Awards, and the twosome further teamed up for a CMT Crossroads that aired after this year’s Super Bowl. But bringing her out of the realm of Idol or country TV into the world of Aerosmith was a different deal.

[Related: Steven Tyler On Why He Joined — And Quit — ‘American Idol’]

Interviewed separately, Joe Perry seemed to have made his peace with the new album being a bit of a grab-bag–the Underwood duet included. Over the course of 15 expansive tracks (18 on the deluxe edition), Music From Another Dimension! does have ample time to recapture the hard-driving ’70s glory days and the era of ’80s and ’90s Top 40 triumphs.

“For the Diane Warren song, f—ing do it,” Perry says. “If you want to put a ballad with Carrie Underwood singing on it–is that her name?–f—ing do it. Who cares? Let’s go for it., whatever feels good for us. And that’s what we do with this.” 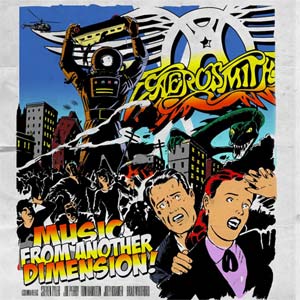 Perry explains further: “If you really want to get down to it, there’s a precedent for everything we did on this record, whether it was a Diane Warren song, a jam song like ‘Something’ with me singing it, to a song Tom (Hamilton) sang, to a song that Joey (Kramer) wrote.” Back in 1976, we were looking back at Led Zeppelin, the Stones, the Yardbirds, and the Who and what they did. We know we can do our version of that better. Only now, we’ve got a whole stack of s—, so we don’t have to go that far back; we’ve got our own precedents we can live up to. So it doesn’t matter anymore.”

Still, assuming he was the original conscientious objector to going country within the band, Perry might have had trouble finding a precedent for “Can’t Stop Loving You.” Whatever Tyler’s original lyrics for the song were, the beginning of Underwood’s solo verse probably ended up being rewritten to sound even more country once she took Tyler’s emergency phone call:

This does eventually end up in a less innocent evocation of “sin,” because it is still Aerosmith, so… the rabbit still done died, even if it does involve America’s sweetheart.