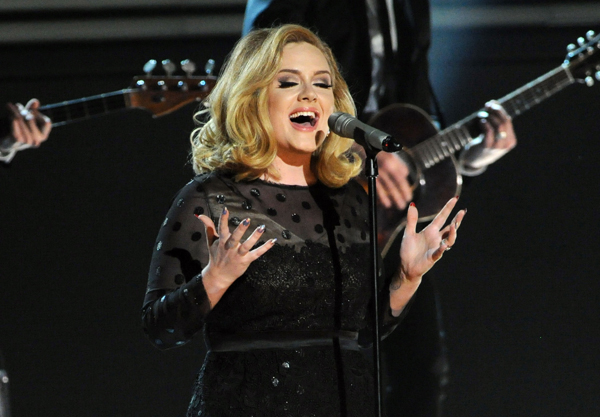 Having already collected an armload of Grammys on a night that was destined to be hers, Adele capped one of the biggest individual years in pop in ages by returning to the stage at the awards show. Fully recovered from the vocal cord surgery that sidelined her at the end of last year, the singer performed her blockbuster hit “Rolling in the Deep,” allowing herself a little giggle when she finished. The star-studded audience gave the powerful singer an extended ovation, with Rihanna and Paul McCartney, among others, leading the cheers.

Later in the show, she accepted the Grammy for Record of the Year for “Rolling in the Deep.” She thanked the radio programmers who made the song ubiquitous across several formats: “People just seem to really, really enjoy it,” she said, in a wee bit of understatement.

Moments later, she walked on stage yet again, this time to collect the award for Album of the Year. “Mom, girl did good!” she blurted, dabbing at tears.

Adele’s 21 has sold more than 6 million copies to date and is certain for another big boost following her big night at the Grammys. The album has spent a total of 19 (nonconsecutive) weeks at number one. One more week, coincidentally, would tie the soundtrack to The Bodyguard, which featured the late Whitney Houston, as one of the all-time leaders in the category.