And four years later, that girl is still on a hot streak, so to speak, stripping and stage-rushing for Adam. Such is the loyalty of the Glambert fanbase.

Adam was performing at the Del Mar Country Fair in the San Diego area on Tuesday, July 2, when during “For Your Entertainment” a bra-flaunting girl sprinted across the stage and high-fived him.

Even more entertaining? It was in fact the very same streaker from 2009, Katelyn Greathouse. It actually seemed like Adam might have recognized the girl, but whether or not he did, he certainly didn’t seem unhappy to see her, brightly shouting “HI!!! ” and quipping, “That was cool!” — but otherwise not missing a beat of the song.

Katelyn’s return-to-the-scene-of-the-crime cameo comes in around the 1:20 mark below: 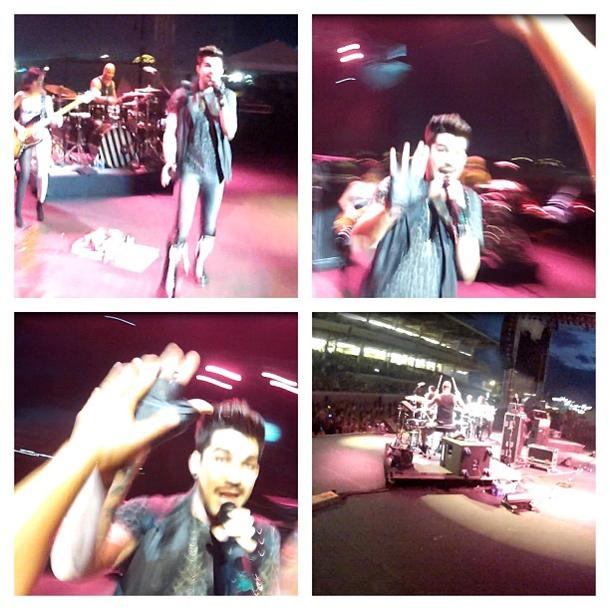 A glimpse at Katelyn’s Instagram shows her plotting her plan from her faraway amphitheater seat, followed by some pretty vivid close-up pics she snapped herself as she ran towards Adam’s high-fiving hand. Later she posted, “Tonight felt so unreal, yet I felt so alive!”

A couple months ago, on “Adam Lambert Appreciation Day” (yes, it’s a holiday, people), Katelyn uploaded some photos of the original Mt. Carmel High incident, revealing that she “got suspended for the week then put on this homeschooling thing for the rest of the year so I wouldn’t cause distractions hahah tmz wanted to interview me but the school said no and kept me in the office.”

Looks like Katelyn — and Adam — got the last laugh this week.