Action Bronson is calling from Queens, numb from wax, waiting on a delivery of Colombian food. The Flushing-bred rapper is a regular dude with an extraordinary appetite. Over the last three years, the former chef has become hip-hop’s galloping gourmet — a hyper-quotable blend of Anthony Bourdain, Big Punisher and Bam Bam Bigelow.

During an era when the upper-crest ennui of Girls soaks up the most intense pop culture glare, Bronson represents a more bagels-and-bodegas archetype of New Yorker. He wheezes with a husky outer borough accent. His profane sensibilities are more Howard Stern than Hannah and her sisters. His diverse cast of characters includes Bronx hookers and African taxi hacks, notorious gambling fixers and obscure sports references effortlessly plucked from the Bo Jackson cover of Beckett Monthly.

Bronson is currently promoting Blue Chips 2, the sequel to last year’s excellent original. There’s also his forthcoming food series on Vice and a commercial LP debut through Vice’s partnership with Warner Bros. The appeal of the Party Supplies-produced BC2 might be best summed up in the trailer, where a bespoke Bronson drops briefcases of cash at Patrick Ewing’s feet in exchange for the Knicks center blowing a potentially game-winning finger roll. It’s a funny and absurd alternate history, yet grounded in a colorful regionalism often considered obsolete.

In the half-hour before the deliveryman rang the doorbell, Bronsalino discussed everything from drugs and Judaism to public misperceptions and recording in Paris.

Is it difficult for you to write on the road?
Sometimes. You’re driving all day, getting stoned and relaxing or enjoying the sights of a place you haven’t been before. I get inspired in certain places. You have to write in places like Amsterdam or Paris or New Zealand, when you’re standing on a yacht, looking out at the middle of the ocean.

What’s the daily routine for you in a place like Paris?
There’s no routine. Paris is just like New York. I hang out. I enjoy myself. I just enjoy walking around the city.

You excited about the new basketball season?
Oh man, am I . . . whoop whoop.

As a semi-professional gambling fixer, who do you think is going to be in the Finals?
I mean, listen, I’m upset because I’m a biased New York Knicks guy, but I can’t deny that Brooklyn looks like they got a nice little squad on them if they can stay healthy. Obviously, the Heat, San Antonio. The Thunder are always in it, and you can’t count out Kobe.

There’s a ton of baseball references in your rhymes. Did you play?
Absolutely. I played all throughout high school.

What position?
I was a power-hitting, lefty-swinging first baseman, and then I turned into a DH when I wasn’t tall enough to play first base any more. I’m still a huge Yankees fan. Growing up, Jeter was my guy, but Bernie Williams was my favorite player. Right now, it’s [Hideki] Matsui.

What can people expect from your cooking show?
More of my glorious personality, my shining teeth and my brilliant skin. Just more of my brilliance.

Was the brilliance natural or did you have to work at it?
You gotta think quick on your toes. I’m just a natural at this. That’s why they pay me the big bucks. [Laughs] I’m a natural. That’s why you buy me the souped-up Lexus and I just drive it out in front of my mother’s crib with a bow on it, and a humongous bag of money waiting in the passenger seat. 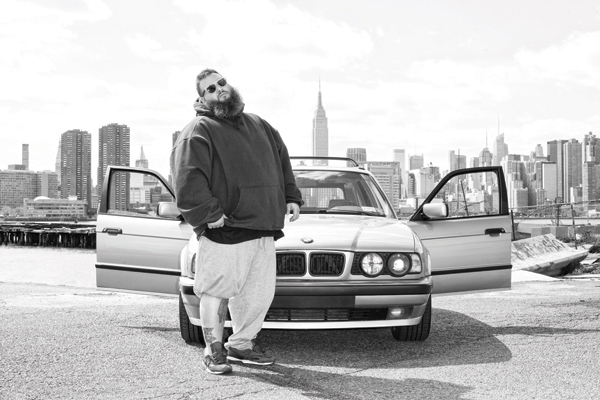 I hear you’re a massive White Men Can’t Jump fan.
I am. I almost watched it last night, in fact, but I watched King of New York and Juice.

Were you a big 2Pac fan?
I was a humongous 2pac fan in movies. In Juice, he was the illest. Music-wise, I liked Pac, but I wasn’t really his biggest fan.

I imagine growing up in New York at the time, you probably had to pick sides and go with Biggie.
Hell yeah, the East-West shit was real. Motherfuckers didn’t fuck with the West Coast shit. Growing up it was all Biggie, Mobb Deep and Nas. But you grew out of that quick.

What’s your go-to-dish right now?
I’ve been making a lot of grilled cheese sandwiches with truffle oil. I’m trying out all different types of cheeses to see which works best. I like the fresh mozzarella because it’s almost bland, so all you taste is truffle. But I’ve also been trying it with a lot of taleggio, which smells like straight shit. It smells like feet and German hooker pussy that’s been sitting out in the sun to bake, but yet it’s amazing. It tastes so good.

Does it ever feel jarring to consider that it’s only been three years since you were a professional cook, and now you’ve traveling the world rapping, with your own cooking show?
I mean, I’m not at the point where I have to be mesmerized by anything. It’s not like I’m Eminem or Michel Jackson status. I ain’t shit, man. I’m just another motherfucker trying to get it. I hope people look at me as more than that, but I’m a humble dude. I don’t need to boast and brag. Of course, to do this, you have to have some sort of feeling that you’re the shit.

Everyone wants to be a Martian or a robot, but at the end of the day, I’m a regular dude, a normal person.

You’ve said that you can’t sleep because your dreams are too real. What do you dream about?
I don’t know – sometimes, it’s just too vivid that you have to wake up like, ‘Holy shit, what just happened?’ Shit just popped off too crazy. After you eat certain foods, you go into a trance or some shit. I had some fucking short ribs that, hoo . . . goodness gracias, it was like I was on a psychedelic trip.

Are you still smoking on the daily?
I smoke myself into oblivion every day.

How much wax do you smoke a day?
A lot. I’m a drug addict.

What made you smoke wax?
The wax is more pure. It’s a beautiful taste . . . a cleaner high. You don’t stink like weed afterwards and you get higher for longer. I think I’m in it for the numbness. It gives me a real numbness. I’ve also been huffing a lot of jenkum. I’m about to bake a batch of jenkum right now.

Your mother is Jewish. Did you ever have to go to Hebrew school or get Bar Mitzvah’d?
No. If my grandfather was alive, I’d have had to. But as it was, I never went to Hebrew school.

What were you like at 13?
I was a little fucking prick. A rugrat, just wilding out. I was smoking weed and doing whatever I wanted.

What do you feel is most misunderstood about you?
When people call me a misogynist. I respect and love women totally. Sometimes I use words that aren’t pleasant, but I’m talking about a certain type of person. Why be offended by anything? This is art. Go fuck yourself. 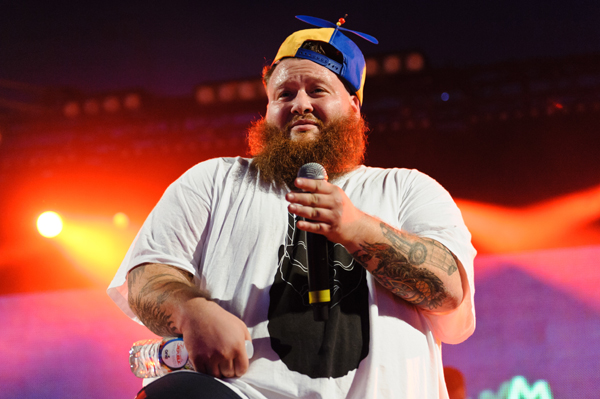 What are your favorite qualities in a woman?
Ambition, honesty, and she has to have her asshole bleached so I can’t see that brown. She has to have that Brazilian asshole. [Laughs] I’m just fucking with you. She just has to be a loyal, honest person, and someone who doesn’t rely on anyone to do what they need to do.

On “9-24-11,” you mention depression. Is that something you struggle with?
It’s definitely not something that I struggle with. I’m a very happy person, but sometimes you get in those blue moments. Writing good songs is all about capturing those moments.

What’s your idea of happiness?
I’m happy right now. Every day is a different day with a different feeling. I’m just a happy person in general.

What do you appreciate the most in your friends, and has that changed since you’ve gotten more successful?
I appreciate that they’re not yes men.

What’s your favorite place to vacation?
I haven’t been on vacation in a long time. The last time I went on vacation was with my mother. We went to Club Med in Florida when I was mad young. Now I’ve been able to play shows everywhere in the world, so there’s no need to go on vacation.

Did you buy anything extravagant after you signed your record deal?
Not really. The only thing I bought worth any type of money was an 850 Beamer, and I already got rid of that.

Why did you get rid of it?
I don’t have that much money yet, and what was the point of it just lying around? I’d barely get to drive it. I want to get to the point where I can afford five of them and my mother can take it and crash it. She can wild out. She can get head in the whip and crash it.

How you would describe your forthcoming Vice/Warner Bros. album?
If you want to laugh, cry, jerk off, take a shit, this is the music you want to have playing. This is for when you’re comfortable with who you are — whether it’s your dick size or your tit size.

Who are the guests going to be?
I got Kool G Rap on a song. I’m hoping to get Nas on a song. There’s another one with all the Mobb Deep guys – Havoc, Prodigy, Big Noyd, Big Twins.

What would you want it to say on your tombstone?
I don’t want a tombstone. I want to be sprinkled in the ocean.