An old joke: “What do you call someone who likes to hang out with musicians? A drummer.” Over the years, musicians have made the transition from a drum kit to a guitar for many reasons, ranging from the need to avoid the physical demands of drumming to the desire to stand up during a show. In fact, some of the world’s greatest guitarists started out behind a kit. And the ex-drummers who don’t make themselves into guitar heroes? Well, at least they have good senses of rhythm.

The 100 Greatest Guitarists of All Time: Fricke’s Picks

1. Frank Zappa
The Number 22 name on Rolling Stone‘s list of the 100 greatest guitarists of all time started as a drummer: Around age 12, before Frank Zappa owned a drum, he used his bedroom bureau, pounding on it so hard that he stripped off the paint. He moved on to a single snare drum, and then after a couple of years, upgraded to a full kit. In high school, Zappa played drums for an R&B band called the Ramblers. His self-review: “My main drawback was that I didn’t have good hand-to-foot coordination. I could play a lot of stuff on the snare and the tom-toms and cymbal and everything, but I couldn’t keep an even beat on the kick drum.”

He soon got fired from the Ramblers, started another band called the Blackouts and then, inspired by the bluesmen Johnny “Guitar” Watson and Clarence “Gatemouth” Brown, started playing his father’s guitar. “I didn’t learn to play chords until after about a year, but in four weeks I was playing shitty teenage leads.”

2. Dave Grohl
After Kurt Cobain killed himself in 1994, drummer Dave Grohl started the Foo Fighters — initially playing all the instruments himself. Once the Foos became an actual band, Grohl became, as he put it, “a fucking drummer trying to stand up front and play guitar.” But while he was a solid singer and guitarist, he remained one of the greatest drummers of his generation. This had some unusual side effects, like his being in heavy demand for outside sessions for an instrument he didn’t usually play in his own band. When he rerecorded the drum parts for The Colour and the Shape himself, Foo Fighter drummer William Goldsmith was offended and quit the band.

As a teenager, Grohl had been told by an adult that if he practiced diligently on guitar, eventually he would master the solo to Lynyrd Skynyrd’s “Free Bird.” As an adult who played guitar for a living, he remembered, “I knew with all my heart he was wrong, that even if I practiced for years I’d never be able to play that guitar part. And I still can’t play that guitar part!”

3. Chris Cornell
The foundation of Soundgarden was in 1984, when Chris Cornell and Hiro Yamamoto were roommates. As Cornell told the story, “I was a drummer and he was a bass player, so it was sort of like the law that we had to start a band.” Cornell was also Soundgarden’s singer, which is why he soon put down the drumsticks — standing in front of the drum kit instead of sitting behind it, he could focus on his vocals. Bare-chested and roaming the stage (sometimes rolling on it), Cornell became the quintessential frontman of grunge rock. He eventually filled out Soundgarden’s sound on rhythm guitar, despite never having played guitar before the band started.

4. Keith Strickland
When the B-52’s cofounder Ricky Wilson died of AIDS-related cancer in 1985 and the band decided they wanted to continue, they needed a guitarist. Instead of recruiting somebody new, drummer Keith Strickland decided to take the place of his best friend. “I wanted to keep some connection with what Ricky had done,” he told Rolling Stone. “He was a very key ingredient in our sound, and I just didn’t want that to disappear. I knew that once we started playing live, there’d be older material to play, and if we got somebody else, I’d have to be there giving them a lot of hints, like the tunings and everything. So I figured I’d just do it myself. I knew enough that I thought I could do it. Well, I was hoping I could do it.” With Strickland playing guitar and writing music, the B-52’s had their greatest success ever: the top-five singles “Love Shack” and “Roam” and the quadruple-platinum Cosmic Thing. 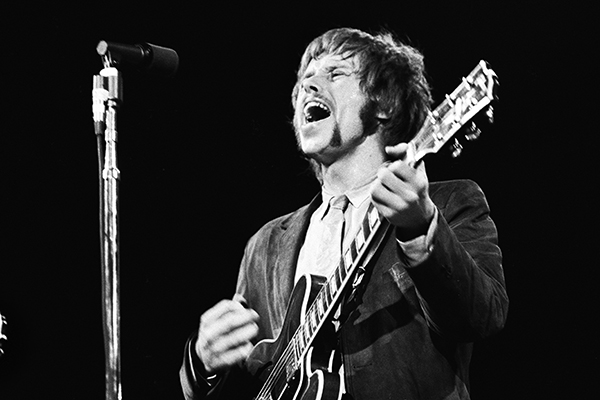 5. Skip Spence
Recruited to play drums for Jefferson Airplane because of his high energy level, Skip Spence was an enthusiastic basher when he got behind the kit. Original Airplane singer Signe Toly Anderson remembered, “All he wanted to do was be part of that band. He didn’t know how to play drums; he played his heart out. If you listen to every album he’s on, that boy’s just beating his heart out.” Spence played on the group’s 1966 debut album, Jefferson Airplane Takes Off, cowriting a couple of songs, and then bailed to start the psychedelic folk-rock Moby Grape. Although it appeared to casual observers that Spence was switching from drums to guitar, he was just reverting to his usual instrument.

6. J Mascis
In high school, J Mascis (86th in Rolling Stone’s 100 Greatest Guitarists), was the drummer for Deep Wound, the fastest hardcore band in Amherst, Massachusetts. Then he started another band, Dinosaur (the “Jr.” came later), with Lou Barlow on bass and Murph on drums: Mascis switched to guitar, figuring that he could teach Murph how to play the drums. Nobody expected, however, that Mascis would turn out to be one of alt-rock’s greatest guitar heroes. Sometimes, though, Mascis will get back behind the kit: On Dinosaur Jr.’s 1991 Green Mind, for example, he drummed on seven out of the ten tracks, and he’s kept time for the Boston metal band Upsidedown Cross.

7. Patrick Wilson
Weezer started in 1992, and for most of the following two decades, Patrick Wilson was the drummer. But he started playing guitar in his side project the Special Goodness, and beginning with Weezer’s 2009 tour, he shifted to playing a lot of guitar live, partially because Weezer frontman Rivers Cuomo wanted the freedom to roam the stage and partially because his body could no longer take the pounding. (He still drums on Weezer albums.) “At some point Rivers abdicated the responsibility of guitar to me,” Wilson said. “Playing guitar makes my shoulder not hurt, and I didn’t really lose any drumming chops, ’cause I didn’t have any chops to begin with!”

8. Don Henley
After years of drumming (in sessions, for Linda Ronstadt, with the Eagles, even with Guns N’ Roses), Henley has mostly laid down his sticks — during recent concerts, he spends most of at his time at a microphone, often with a guitar. “Playing the drums hurts my back,” he’s explained. “I used to have to hold my body in such a position that my spine got out of alignment. Between playing the drums and keeping my mouth in front of the microphone, it really twisted my whole body. I got to a point in the Seventies where I literally could not sleep. There was so much pain involved in the sleeping process that I would have a mattress carried around whenever the Eagles went out on tour, just so I could try to sleep. One of my shoulders got to be an inch or two higher than the other one. I had to do a lot of yoga and exercises to straighten myself out.” He’s happy now to play some guitar and focus on singing and songwriting. “It’s fun just to sit on your ass and watch another drummer work.”