Fox’s new series, Empire, is a music-industry drama that’s being promoted as The Sopranos set in the world of hip-hop. Many critics – from the New York Times to Entertainment Weekly – have praised the show and its bona fides, celebrating the “attentiveness to nuanced characterizations” and noting Timbaland’s attachment makes the show “absolutely credible.” It’s a fine enough primetime soap opera, but there’s a difference between hip-hop and hip-hoppish; the realest things on-screen are the fake Basquiat paintings in the background. If you’re looking for anything resembling behind-the-scene authenticity or insight into how the game is played, Empire is a world away. Here are six dealbreaker examples where, in the eyes of this hip-hop fan, the show gets it really wrong:

Studio sessions just aren’t the way they used to be.
In the opening scene, Lucius Lyon, the President and CEO of Empire Entertainment (played by Terrence Howard), sits in the control room of the studio and watches his artist from behind the glass; her vocal takes sound good but there’s something missing. He gets up from his seat and joins her in the live room. Rubbing her shoulders, Lucius whispers, “Go back in your mind, to a year ago, when you just found out your brother had been shot. How did it feel? How did it feel when you had to go identify his body?” Her hurt comes through just that little bit in the music; he gets what he wanted. But this isn’t the 1990s anymore; the only people who come to studio sessions are A&R representatives, hangers-on and groupies. The most accurate part of this televised version is that Bunky, Lucius’ driver, falls asleep on the leather couch.

In the real world, these lines could maybe pass as the inoffensive patter of bar mitzvah emcees. But here, it’s supposedly fresher than anything Rich Homie Quan could spit. “This is what I’m messing with,” says Lyon. His ex-wife Cookie (Taraji P. Henson), just out after 19 years in jail, listens on a tinny iPhone speaker for less than two seconds before saying “That’s hot!” and claiming her uncle, James Brown, would call that a “big fat hit.” The fact that their son Hakeem was the rapper behind the lines printed above doesn’t matter much; Lucius threw another of his children in a garbage can after finding the young boy, Jamal, dressed as a girl. So this record executive isn’t just a monster – he’s the type of monster that has incredibly poor taste in rap, despite the fact that he runs the label.

The heated arguments surrounding homosexuality ultimately don’t matter.
Frank Ocean’s influence can be heard clearly in Jamal’s piano-playing – but other than that, the Odd Future star and crooner might as well not exist. Jamal, while closeted, has a live-in boyfriend and It Gets Better-type tattoo, but his father still sees his sexuality as up for debate; this takes up a lot of air throughout the episode. Recently diagnosed with ALS, Lucius is on the search for a successor, and – strictly because of his homosexuality – Jamal is not welcome to drop his resumé in the box. (Similarly, the other two sons have strikes against them: one’s business-minded but has no music sense, while Hakeem’s too dumb and immature.) Hip-hop is often seen as no country for gay men, but R&B fans – and specifically the Tumblr masses who would appreciate Jamal’s music – wouldn’t take issue with his sexuality, especially in 2015 where craven publicists would use it as a marketing tool. In fact, by episode two, it looks like Cookie is going to do just that.

Empire doesn’t understand the relationship between hip-hop and the Internet.
“Times have changed,” Lucius declares. “The Internet has destroyed the artist’s ability to make money cause our work is downloaded for free online. And now it’s impossible for the disenfranchised kids growing up in the projects to overcome poverty the way that I did. We are going to change all of that.”

This is an overstatement of an outdated idea, and definitely not something a CEO would ever say to a conference room of executives as he announces plans for an IPO. Everyone – artists and labels included – has figured out how to make money using the Internet, largely by placing ads against content. Also, no one’s really downloading anymore: streaming services (like Spotify, Pandora and YouTube) all are popular and all pay out to varying degrees. Besides, touring and merchandising are the areas to make money in these days, both of which have been made easier as a result of the Internet. It’s telling that one of the opening shots shows fans running up to Lucius outside his offices, hoping to get CDs signed. 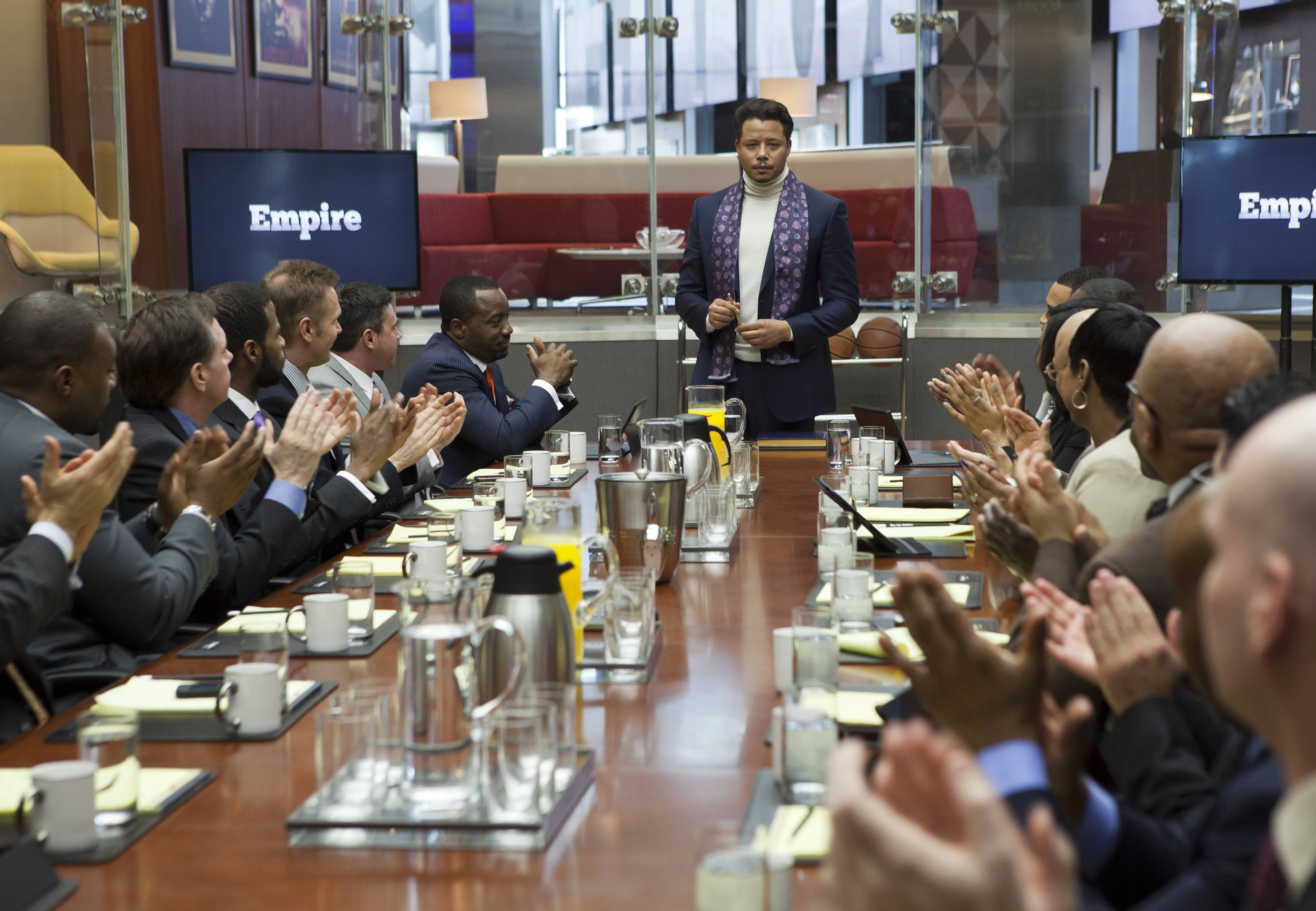 The executives in that conference room? 75% black.
No way. In the hip-hop world, the percentage leans heavily white and somewhat Jewish. And it’d be almost unbelievable for Lucius to exist, himself! Real-world black music executives of his level can be counted on four fingers: Diddy, L.A. Reid, Sylvia Rhone, and Jay Z (and that’s if you’re feeling generous and consider Roc Nation a music label, not a management company). Also crazy: for there to be a free-standing label of this scale in 2015. Far more likely than it ever reaching the NYSE, Empire Entertainment would’ve been bought up by a faceless mega-conglomerate like Vivendi, Sony or Access Industries only to be dissolved and mined for parts.

Clothes make the man, but they really make the woman.
Where some executives might try and pull crisp suits and gold chains for a hip-hop executive, Lucius dresses like he pinned Sammy Davis, Jr. and Prince to a vision board. A recurring look is a turtleneck under a suit jacket, accented by a long scarf draped straight down, like Bruce Wayne coming from a shindig or Roger Moore dropping into Moonraker. He should’ve been dressed like Reid or Diddy: Miami-style suits with an open collar.

What the wardrobe department does get right is Cookie’s look: Upon getting out of prison, she’s straight-up Lil’ Kim, 1997 at its finest, dripped in white fur and gold door-knockers. Cleaned up, she gets into a long cream jacket and wide-brimmed hat that whip through the wind. Hakeem also looks of the moment, in faux-Atlanta swag. Curiously, though, he wears straight-forward Timbs from mid-Nineties New York, way more of Lucius’ time. The jewelry seems off, too: Bunky wears a thick dookie rope over his cheap sweatsuit, which is either a bad investment or just an improbable pairing.