Since showing the world her poker face and hair bow in 2008, Lady Gaga‘s outfits have been talked about as much as her music. Often times, they’ve even overshadowed it: Recall the 2010 VMAs, whose biggest star of the evening was The Meat Dress. This past weekend, Gaga made sartorial history once again with a dress that flies dubbed VOLANTIS.

Attention-baiting or not, Lady Gaga’s wardrobe changed the landscape of pop culture. The singer has brought high-fashion to mainstream consciousness, fostered a deeper respect for it as an artform, and propelled the careers of formerly cult designers, like her long-time stylist, Nicola Formichetti — now artistic director of Diesel.

Throughout her career, Gaga has become a beacon of fantasy in pop and fashion. She’s not only pushed the sartorial envelope with outlandish creations like that famous meat dress, she’s also challenged ideals of beauty in both realms. As zany as her costumes might be, they’re rarely trivial; hours of thought goes into each from her design team, Haus of Gaga.

1. Her iconic hair bow was created to resemble Hello Kitty’s bow.
Gaga’s hair stylist, Patricia Morales, designed the look for her “Poker Face” video but the singer liked it so much, she ended up making it her signature after the shoot.

2. Gaga honored Hello Kitty again a year later by donning a dress made out of the brand’s toys.

For the cuddly cat’s 35th birthday, Gaga starred in a campaign where she was styled in a Sanrio stuffed animal gown, Hello Kitty heels, and the floppy bow. It marked the second time in 2009 that Gaga wore a plush toy ensemble. The first was her Kermit the Frog coat. 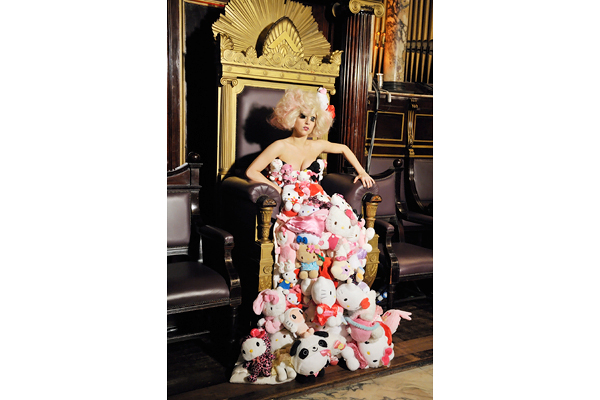 3. Gaga’s Kermit the Frog coat was a commentary on not wearing fur.
She earned a compliment from PETA on it, who blogged about the Jean-Charles de Castelbajac runway creation along with Gaga’s statement: “I really loved this one in particular because I thought it was commentary on not wearing fur, ’cause I hate fur and I don’t wear fur. We were all laughing in the house about how it looks like a pile of dead Kermits.”

5. Years later, when Lady Gaga was forced to use a wheelchair, it was 24-karat gold.
The $2,600 chair was conceived by jewelry designer Ken Borochov, had quilted leather seats and padding, as well as a hood, and was completed with a mere week’s notice. While Gaga was recovering from hip surgery, after canceling the rest of her “Born This Way Ball Tour,” Gaga also appeared in a custom Louis Vuitton wheelchair — one of the few times she’s sported brand logos.

6. Before she could afford luxury brands, Gaga copied a Hussein Chalayan creation during her Fame Ball tour.

Her plastic bubble dress was inspired by the designer’s 2007 spring show. When she didn’t have the funds to purchase it, she had her Haus of Gaga team come up with their own rendition. A year later on her Monster Ball tour, she over-spent on her wardrobe, causing her $3 million in debt. This year, the singer one-upped Chalayan in a dress made of bubble machines.

7. Lady Gaga’s holographic “Bad Romance” outfit was created by Alexander McQueen and brought iconic status to his armadillo shoe.
The singer, one of the designer’s muses, debuted the final version of the song on his spring 2010 runway — the last collection he was alive to present. Two years later, Gaga honored the late designer in the special edition Born This Way song “Fashion of His Love” and then sold chocolate versions of McQueen’s signature shoe for $95 a pop at her holiday workshop for Barney’s New York. 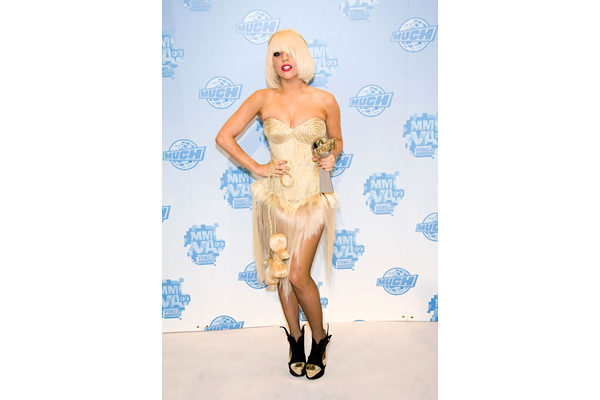 9. About the meat dress: It weighed 50 pounds, didn’t drip any blood, and, according to its wearer, it “had a sweet smell.”
Franc Fernandez designed the dress, sourcing the meat from his family’s butcher. He’ll probably never live it down, but at least it earned him a placard in a museum. The dress was put on display in the Rock and Roll Hall of Fame’s “Women Who Rock” exhibit, alongside another VMA outfit worn by Britney Spears and a fur stole belonging to Billie Holiday. But as Stylite notes, before that happened, it “had to be painted over to look ‘fresh’ because, as the museum’s spokeswoman said, it had acquired a ‘dark, beef jerky’ coloring.” 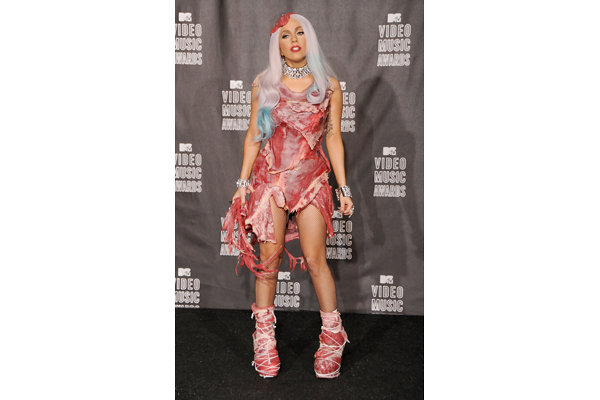 10. Gaga’s famous telephone hat was designed by Philip Treacy, who was also responsible for Princess Beatrice’s polarizing Royal Wedding topper — and the headwear worn in the “Alejandro” video.
The singer wore it shortly before her “Telephone” duet with Beyoncé was released. Around that time, Lady Gaga requested an internship with the milliner. He asked that she brush up on her sewing skills first. Two years later, she opened his spring 2013 show. 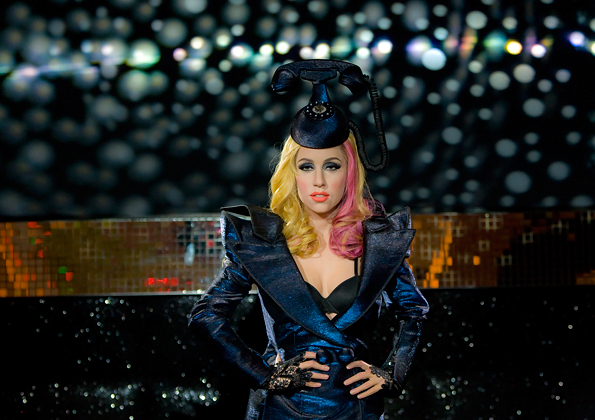 11. The white voluminous dress she wore to the opening of her holiday workshop for Barney’s New York was a custom design by Chanel’s Karl Lagerfeld.
Gaga liked it so much, at the event she told WWD, “I think I also would like to be cremated in it.” Likewise, Lagerfeld, who is notoriously hard to please, is a fan of Gaga’s work. When he contributed to her fashion column for V Magazine, the designer wrote, “Gaga gives the world her music and her talent, but the thing I like most is that she fights against boredom and banality. She also puts forth an ever-changing, inspiring, and strong image — an image beyond fashion.” 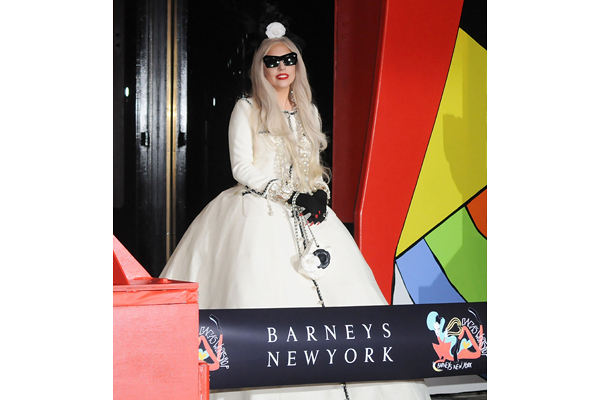 12. Lady Gaga’s male alter ego Jo Calderone, which she acted out during the 2011 VMAs, was initially conceived as a joke.
She and fashion photographer and music video director Nick Knight jokeingly staged a photoshoot where she dressed as Jo and then shopped the images around to magazines, masquerading as a male model.Vogue Hommes Japan ended up selecting one for its cover.

13. The spacious illusionary Comme des Garçons dress she wore was a response to the media’s scrutiny over her weight.
Her second response was to tweet the Marilyn Monroe quote: “To all the girls that think you’re ugly because you’re not a size 0, you’re the beautiful one. It’s society who’s ugly.” And her third response was to strip down to her intimates. 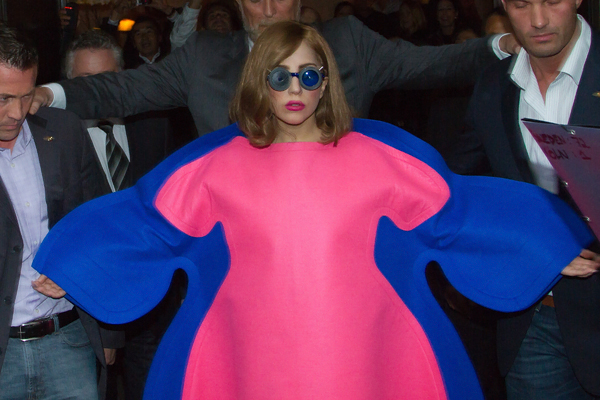 14. Lady Gaga once recycled Liz Hurley’s Versace dress seen-around-the-world in 1994.
The plunging safety-pinned stunner — which officially earned its place in the fashion canon last spring when it appeared in the MET’s punk exhibit — is one of the only outfits Lady Gaga has shared with someone else.

15. Versace opened their archives for Lady Gaga for her “Edge of Glory” music video.
It was the first time in history the brand had allowed someone free reign of their past collections. Gaga chose one of their popular silk shirts and a strappy leather getup, adorned with studs and Medusa heads.

16. Versace also outfitted Lady Gaga for her Born This Way Ball tour.
She’s since thanked the fashion house’s head with the Artpop ode to her, “Donatella.” 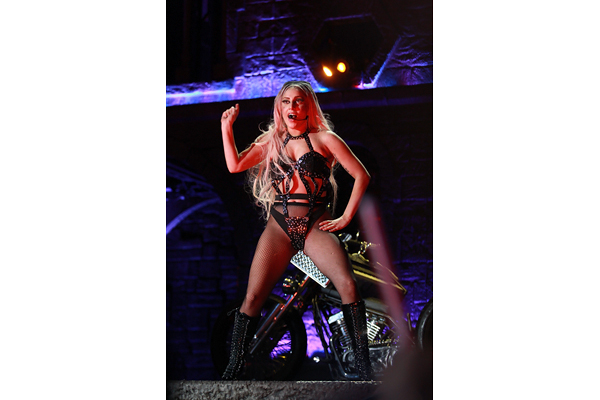 17. The “Born This Way” video made fashion history.
From being directed by Nick Knight to cameos by models Raquel Zimmermann and Rico “Zombie Boy” Genest to Gaga’s custom Thierry Mugler clothes, the 2011 clip is one of the most high-profile fashion productions of the decade.

18. Lady Gaga’s “Applause” cover makeup was a happy accident.
She got emotional during the video shoot because she missed her fans while she was recovering from her hip injury and smeared the makeup down her face to look like tears. 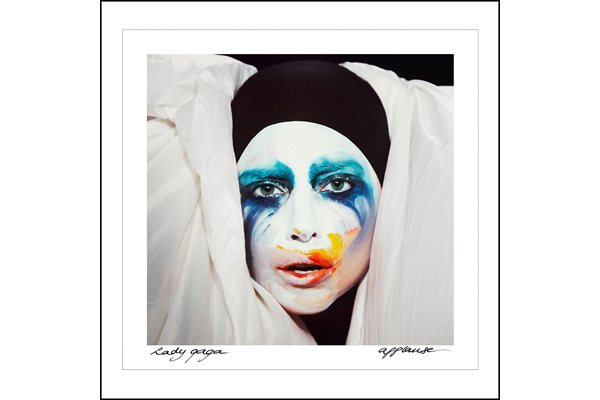 19. Lady Gaga’s masks are how she deals with her insecurities.
She recently told Glamour Magazine, “Everybody always laughs because I feel so much more comfortable with, like, a giant paper bag on my whole body and paint on my face. Sometimes I try really hard to take it all off. But inevitably what’s underneath is still not a straight edge. And I don’t think it ever will be.” Which is why she recently wore a gigantic Charlie Le Mindu mask, made out of hair and inspired by the Queen of Sheba. 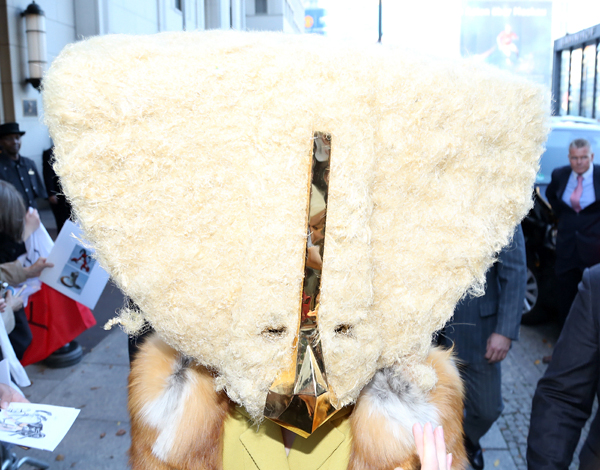 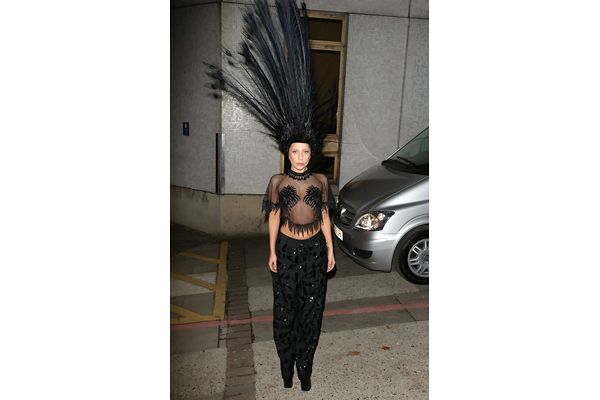 21. The rotten dentures Lady Gaga wears on the “Dope” single artwork (which she also flashed at the YouTube Music Awards) are really a bracelet.
The design, dubbed a “dental cuff,” is the work of 25-year-old Danielle Hills. Haus of Gaga initially reached out to her to acquire rings for a video when she was enrolled in her final year at Pratt Institute’s fine-art jewelry and metals program. The rings were never used but Hills got her collection picked up instead by Formichetti’s then pop-up store in New York. 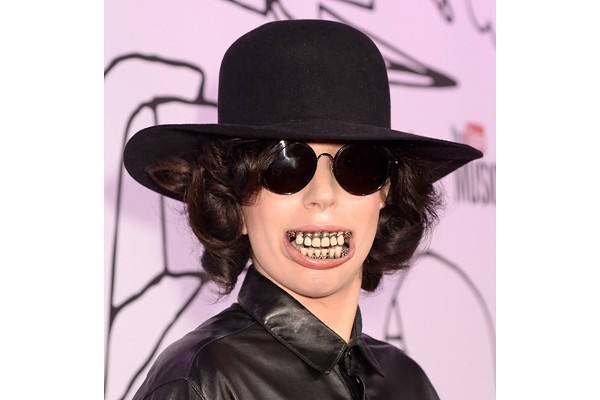