Rap Release of the Month

Saba, Care for Me
“I’m not mad at God, I just can’t get out of bed,” raps Saba on “Calligraphy,” a highlight from his melancholy yet engaging Care for Me. The album falls squarely into the Young Chicago Authors wing of the Windy City rap scene: It mixes confessionals with seduction, inviting the listener to spend an hour hearing a warm, sympathetic voice that swerves between macho rap shouts and shy, soulful singing. “Fighter,” where he recounts the beatings he took as a child in the streets, adds to a too-short catalog of rap songs about bullying that also include the Pharcyde’s “Runnin'” and Childish Gambino’s “Hold You Down.” DaedaePivot and Daoud’s production is dreamy and spare, but minor touches – the filtered guitar and organs that open “Broken Girls,” for example – keep it from settling into the kind of sleepy butter beats that some Soulection-era acts fall victim to. The final track, “Heaven All Around Me,” pays tribute to Walter’s cousin Walter Long, whose death last year inspired this lovely, hopeful work.

Cardi B, Invasion of Privacy
The newly minted hip-hop superstar “puts on her bloody shoes and dances the blues” on her debut, writes Rob Sheffield in a four-star review. “Invasion of Privacy is lavishly emotional, intimately personal and wildly funny. … [It] flaunts so many different aspects of Cardi’s game, it comes on like a greatest-hits album, as undeniable as the excellent New Wave suit she rocks in the cover art.”

Denmark Vessey, Sun Go Nova
Denmark Vessey’s latest EP is fuzzy and distorted in a good way. The first half of Sun Go Nova is produced by Earl Sweatshirt and Knxwledge, who drown Vessey’s words in clipped noises and careening sampledelica, a muddy stew that hearkens back to Madlib’s early ’10s sonic junkyards. For listeners who enjoy head-nodding beats, the eerie keyboards of Sweatshirt’s “Trustfall” and “Zzzzz” are catnip. Vessey seems content to let his random life observations and mic-trading battle raps give way to the crackling, distorted sounds; save for “Sellout,” a raw session with Vic Spencer and Drxquinnx, his voice stays gloriously out of focus. The second half of the EP is essentially an instrumental beat tape where Vessey cranks out his own dirty loops, including a rehash of Wendy Rene’s Stax classic “After Laughter” on “Wax Wane Tears.”

Dr. Octagon, Moosebumps: An Exploration into Modern Day Horripilation
Dr. Octagon – a fortuitous collaboration between San Francisco producer Dan “The Automator” Nakamura, turntablist icon Q-Bert and the crazily brilliant Bronx rapper Kool Keith – fell apart shortly after their 1996 album Octagonecologyst earned them a massive Dreamworks deal. There was subsequent acrimony between Nakamura and Keith, who eventually (and surprisingly) buried the hatchet for festival gigs and, as it turns out, a belated sequel to their psych-rap classic. Moosebumps doesn’t have the minimalist raw power of the original: The production is fuzzier, with odd musical aberrations, whirring effects and P-Funk inspired choruses like “Polka Dots.” But much like the trio’s best-known work, it’s deeply strange. Keith talks about scrotums a lot. On “Power of the World,” he raps “Watching insects have sex while vocals come from the larynx” before referencing Lady Gaga, Katy Perry and the Wolfman. Q-Bert’s scratched interludes and “Bear Witness IV” showcase are, as usual, a marvel to behold. 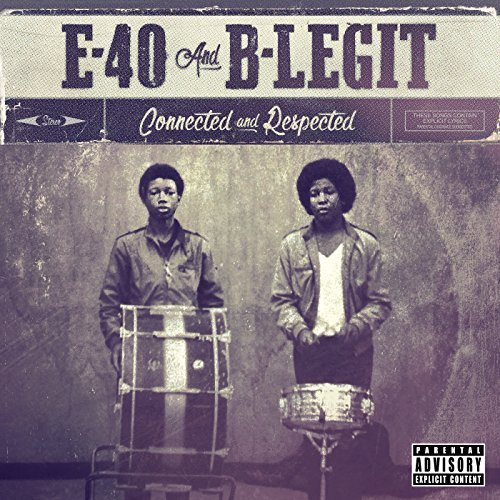 E-40 & B-Legit, Connected and Respected
E-40’s first project with his cousin B-Legit since the glory years of their group the Click is a mobb music revival. The walloping bass is turned up to 11, and the two Vallejo-raised rappers sound like game spitters talking shop inside a trunk-rattling muscle car. Tracks like “Straight Like That” and “Carpal Tunnel” offer advice for aspiring street hustlers, with E-40 rapping “I know how the streets work/Residue on my T-shirt,” on the latter. The Yay Area pioneer may have a reputation as a verbal wit, but as with his other work, Connected and Respected offers some socially conscious fare amidst the gangsta fun and games. On “Fosho,” E-40 apologizes for his pre-rap career as a D-boy. Meanwhile, B-Legit, whose stentorian voice contrasts well with E-40’s slangy tone, remembers, “I remember when people didn’t see the vision/We was in the kitchen, we was on a mission.”

Flatbush Zombies, Vacation in Hell
Flatbush Zombies are the enigmas of the Beast Coast generation: They’re committed to classic boom-bap tropes like Joey Bada$$, but also like to indulge in post-genre, streaming age dynamics like A$AP Mob. The best thing about Vacation in Hell is that even when they write a nominally crossover track like “U&I,” it sounds strange and grungy, like a Gravediggaz outtake. Vocally, the three rappers are cut from the rowdy, rah-rah wing of Nineties rap, and unleash a flood of rhymes about minds twisted by psychedelics, dirty sex and, on “Trapped,” suicidal despair. “This world is backwards/We still in shackles,” raps Meechy Darko on “Chunky,” which was apparently inspired by OutKast’s “Chonkyfire.” Meanwhile, “Reel Girls” takes inspiration from David Banner’s “Like a Pimp” and boasts a verse from Bun B.

J. Cole, K.O.D.
Once seen as an understudy to generational talents like Kendrick Lamar and Drake, the North Carolina musician didn’t reach artistic fruition until 2014 Forest Hills Drive, when he abandoned rap’s typical cameo-heavy big-budget formula for an idiosyncratic, self-produced organic sound that plumbed his neuroses and uncertain beliefs. K.O.D. continues that tradition, but it sounds less warm and more angst-ridden than 2016’s 4 Your Eyez Only. The tracks have an episodic feel – he rues how his “Friends” have fallen victim to drugs and he picks at his own sex addiction on “Kevin’s Heart.” He finds little joy in occasionally regurgitating trap tropes, instead using those sounds to suggest that he’s stuck in the rap Matrix. As a sometimes-bitter look at the consuming nature of fame, K.O.D. doesn’t offer much solace. But it’s gripping stuff: J. Cole has always been more than the sum of his parts.

Nas, Illmatic: Live From the Kennedy Center
Nas’s document of his February concert at the Kennedy Center in Washington, D.C. joins a historically small number of rap concert albums. Given how familiar Illmatic already is, he and the National Symphony Orchestra struggle to give it a fresh interpretation that’s greater than pop classical heft, and the string sections and billowing fanfare occasionally overwhelm his voice. The album’s best moments are “Life’s a Bitch,” which gets a totally new and vibrant rearrangement of the original Gap Band sample. Then there is Nas’ performance, which flows with such power that it sounds unnatural. We rarely see hip-hop wordsmiths like Nas emerge anymore. “You put that stuff on that paper, you’d be surprised the atmosphere reads it,” says Nas when remembering how his “my daughter, my strength” line on 1994’s “The World Is Yours” predicted that he’d later give birth to a daughter and a son. “It can hear our thoughts, this universe.”

Princess Nokia, A Girl Called Red
A Girl Called Red finds Princess Nokia fully embracing the emo-rap moment. Its first two tracks, “Flowers and Rope” and “Your Eyes Are Bleeding” tremble with youthful angst, words about alienation and Nokia’s wavering voice. “Look Up Kid” is essentially a Warped Tour rock track, complete with guitar and drums. But the 20-minute EP doesn’t omit the bad “brujas” boisterousness that turned her 1992 tape into an indie hit. “I ain’t sucking dick for no play, must be out your mind/Gettin’ on my knees, tryin’ to please, must be suicide,” she harmonizes, Lil Uzi Vert style, on “At the Top.”

YoungBoy Never Broke Again, Until Death Call My Name
A solid piece of Southern striver rap. YoungBoy lives the life of a “Villain,” and talks a lot about choppers and beef, but he also admits on “Overdose” that this is just music, not real life – an important distinction since he has tangled with Baton Rouge, Louisiana law enforcement for years. The production is the kind of symphonic keyboard trap that marks the genre’s golden years in the Aughts, and the rapper encourages the connection: “Diamond Teeth Samurai” revives the hook from Lil Wayne’s “The Block Is Hot” and Cash Money CEO Birdman shows up for “We Poppin.” (Youngboy and Birdman are reportedly working on a mixtape.) He’s not entirely a throwback, though. Like most rappers these days, he spends as much time singing as rapping, but at least his harmonizing voice presents more than just pop ambition. On “Solar Eclipse,” he conveys real emotion as he sings, “Ain’t mean to break your heart but, baby, that’s what thugs do.”