It was a long summer for Wiz Khalifa. One month ago, his wife filed for divorce. A month before that, a 38-year-old man named Eric Johnson was shot and killed after one of the Pittsburgh rapper’s Bay Area shows; and all the way back in May, El Paso police arrested him for attempting to bring weed into the city’s airport. Last night at the Observatory in Santa Ana, however, on the first stop of the Black Hollywood Big Secret Tour, all that seemed far in the rearview, and Khalifa was in the mood to celebrate: During his 75 minutes on stage, this became the summer when he scored his first crossover Number One album – and nothing more.

Arriving just before 1:00 AM, Khalifa – outfitted with a red bomber jacket, ripped jeans and Ninja Turtles chain, perpetually the coolest kid in high school – and his four-piece band played through a carefully curated set list with loose precision. There was no trouble with timing or with sound, and there was no “Black and Yellow.” Instead, Khalifa looked to deliver “something more intimate, something everyone can reach out and grab.”

Eschewing arena grandiose, the rapper darted across the stage, delivering lines directly to fans while shaking hands and dodging (or occasionally putting himself under the spell of) outstretched marijuana. Take that, Texas. Still, the Wiz you get in person is not the meandering stoner of his recorded work – Khalifa the performer is animated and engaging. During “The Sleaze,” his delicate run of triplets sent the packed room into a frenzy, and this was not an anomaly: All night, Khalifa’s enthusiasm was so infectious that technical cuts like “ATL Freestyle” easily passed for crowd-pleasers. 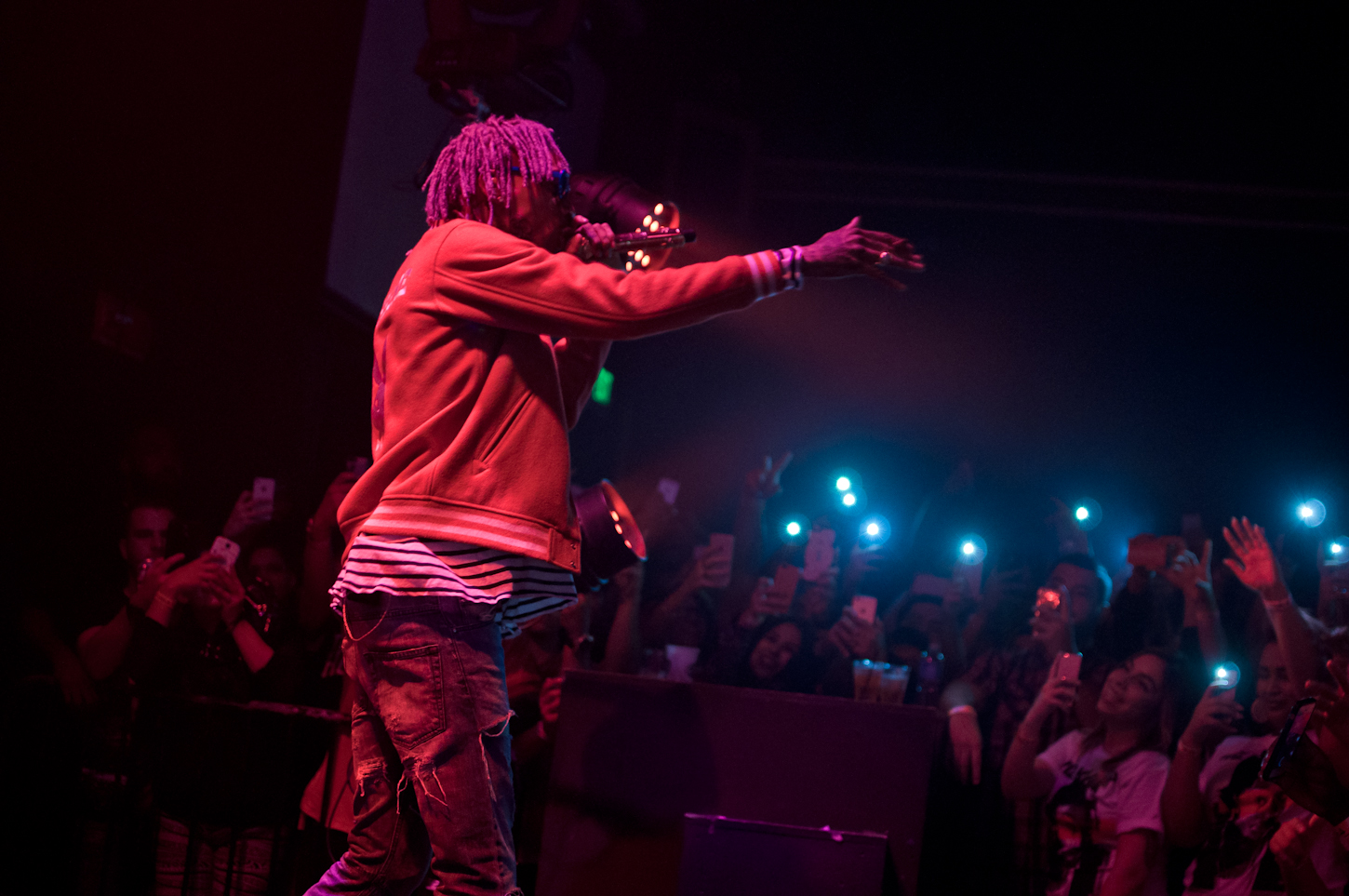 Of course, above all else, Wiz had in fact come here to please the crowd. And while the set list leaned on this year’s Blacc Hollywood (and its precursor mixtape, 28 Grams), breaks between songs were filled with references and callbacks to star-making works like Kush & Orange Juice and Cabin Fever. That sense of balance lent the night an interesting populism: Sure, there was the larger-than-life echo of “We Dem Boyz,” but it was offset by closer “Who I Am,” from 2009’s pre-fame Deal or No Deal.

At his best, Khalifa is reminiscent of the great party-starters from the generation above him. During “KK,” Wiz and his Taylor Gang cronies broke out makeshift choreography for Juicy J’s verses, the crew embracing fans and lip-synching the entirety of Snoop Dogg‘s vocals on “Young, Wild & Free.” Khalifa is not quite as charismatic or incisive as either elder statesman, but on record and onstage, he has the same outlook: Have as much fun as your body will let you, and worry about your bills and your job and your lungs later on.

Neither Juicy nor Snoop made an appearance, but Khalifa was ultimately joined by a more contemporary kindred spirit when New Orleans’ Curren$y took the stage for “House in the Hills,” the pair’s brooding Blacc Hollywood duet. After the song, the rappers stopped to light up on the wings of the stage. “Hold on,” Curren$y said. “I didn’t come out here just for you to take my lighter.” Khalifa just laughed: “That’s what friends are for.”