Anyone able to count to nine could tell right away that something was amiss when Slipknot took the stage at the Xfinity Center in Mansfield, Massachusetts, on Tuesday. Not that audience members at the 19,000-capacity shed seemed to notice as the band emerged to a recording of “XIX,” the brief overture to their newest album, .5: The Gray Chapter. Many were too busy singing along already.

Nor did anything sound amiss when Slipknot crashed headlong into “Sarcastrophe” — it was just that the band was one man down. There were the group’s two backing vocalists and percussionists, Shawn “Clown” Crahan and Chris Fehn, pummeling away at their bespoke clusters of drums and beer kegs on elevated, rotating platforms to either side of the stage. Between them were guitarists Jim Root and Mick Thomson; behind them, Craig Jones on sampler and Sid Wilson on turntables.

Gray Matters: Slipknot Open Up About Their Most Devastating Record Ever

To the rear, high atop an upstage riser, drummer Jay Weinberg — son of Max Weinberg and a replacement for longtime member Joey Jordison, who was dismissed two years ago — thundered through the song’s death-metal-inspired drive, an oversize illuminated goat-dog head glowering balefully overhead. Up front, vocalist Corey Taylor led the charge on second selection “The Heretic Anthem,” its collective battle cry — “If you’re 555/Then I’m 666” — sounded by the chair-pounding masses in the reserved seats, a relatively small but livid pit swirling in front of them.

“Let’s get some business together — obviously some of you heard what happened the other night,” Taylor said, finally addressing the gap occupied by bassist Alessandro “V-Man” Venturella until Sunday, when he collapsed onstage shortly into Slipknot’s show at the Xfinity Center in Hartford, Connecticut. Venturella, presently filling the role of founding bassist Paul Gray, who died in 2010, was rushed to a hospital, where he was diagnosed with severe dehydration.

“We are very, very happy to say Alex is not onstage, but he’s back, behind the fuckin’ set,” Taylor said. Hidden from view for the entirety of Slipknot’s 17-song, 100-minute performance, Venturella nevertheless provided the bottom notes in the group’s low-end-heavy tumult. 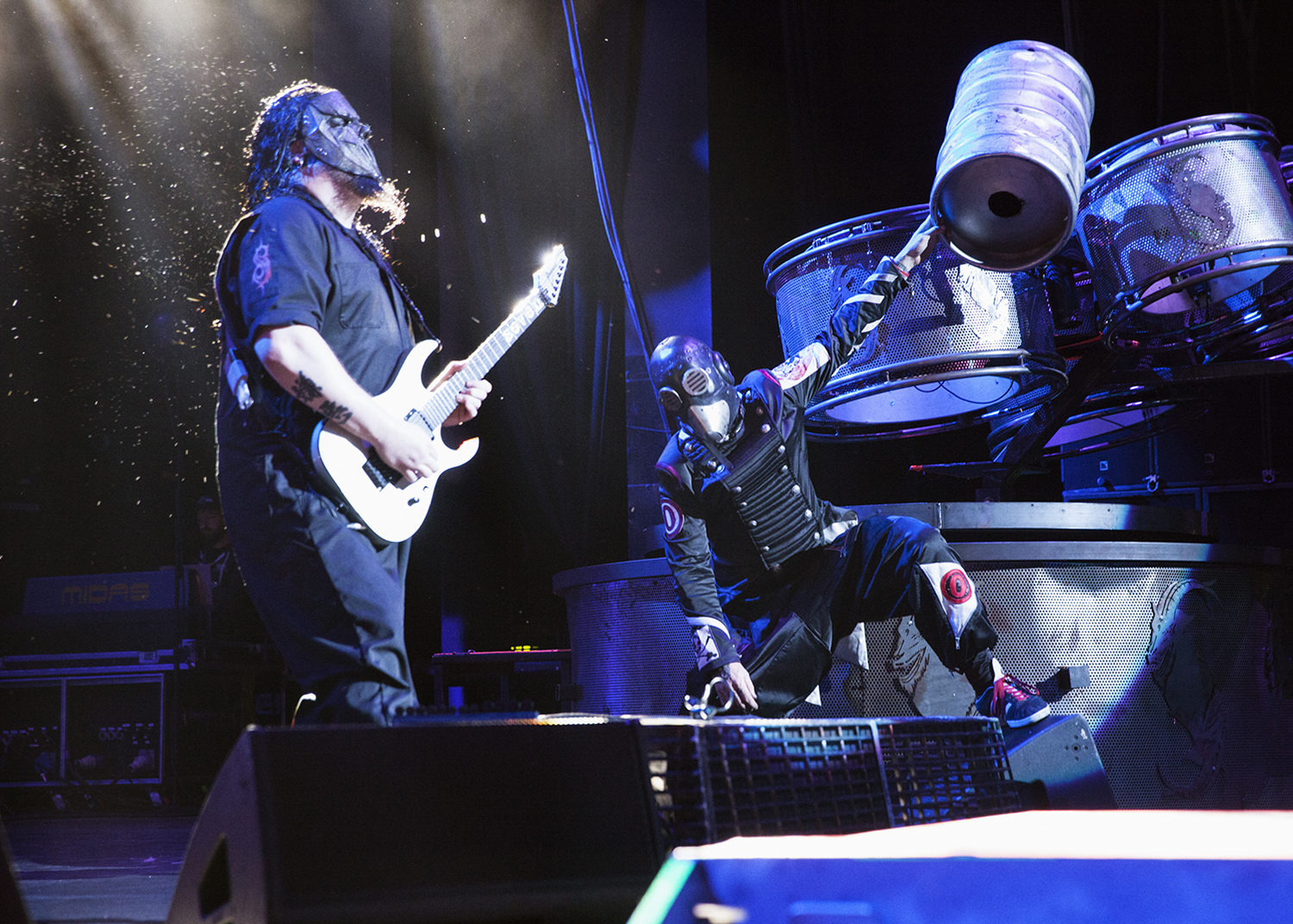 Throughout, you got a sense not only of why Slipknot have maintained their elite status as one of metal’s most popular bands since their mainstream emergence at Ozzfest in 1999, but also why the group consistently provides one of the most involving, satisfying live shows on offer. Partly it’s because they’re musically airtight; on Tuesday, they demonstrated their precision in older songs like “Wait and Bleed,” “Disasterpiece,” and “Spit It Out,” as well as new cuts including “Killpop” and “Custer.” Root and Thomson reeled through one brutally efficient riff after another, as Taylor alternately roared and crooned crowd-pleasing lines and exhorted the audience to join in.

Throughout the show, Taylor urged audience members to look around, notice neighbors and protect one another. The idea of a brotherhood – and sisterhood – of outsiders, after all, has always been Slipknot’s stock in trade.

Sharing the bill, Richmond’s Lamb of God played a comparatively downbeat show: all business, no frills, apart from two oversized screens that played video footage of military conflict, political and religious unrest, and natural catastrophes on either side of Chris Adler’s drum riser.

Paced by vocalist Randy Blythe — an animated presence in camouflage shorts and crusty dreadlocks, who referred only obliquely to the harrowing ordeal he’d been through recently in a Prague prison cell, detained on manslaughter charges of which he was acquitted — Lamb of God charged through 10 songs in 50 fat-free minutes. From opener “Walk With Me in Hell,” the group rifled briskly through its recorded canon, with two songs, “Still Echoes” and “512,” representing the newly released VII: Sturm und Drang.

You had to assume that the band intends to headline its own tour at some point soon, at which point the set list will open up; here, for instance, the only trace of perennial crowd favorite “Black Label” came when Slipknot’s Weinberg played its pistol-crack opening beat as Taylor acknowledged the evening’s supporting acts, which also included Bullet for My Valentine and Motionless in White. Still, Lamb of God’s reserve and intense concentration served as a compelling contrast to the high-octane circus that would follow.