As Sleater-Kinney once sang, some things you lose, some things you give away. But as they proved onstage last night in New York, some things are worth fighting to get back. Sleater-Kinney called it quits in 2006, at the peak of their musical powers, after a decade-long run as the fiercest, most passionate, just plain greatest of American bands. They had a lot to lose by returning with new songs instead of just playing their oldies, which would have been dandy with most of us. But this tour, like their excellent new album No Cities to Love, proves how right they were to come back this way. What other band could get rapturous screams from the crowd for both a shout-out to Planned Parenthood and a cowbell solo? Nobody.

Corin Tucker, Carrie Brownstein and Janet Weiss have never needed each other to make music. All three had their shit together musically before they ever played together, all three were in great bands before Sleater-Kinney, all three kept busy with side projects during the band’s lifespan. (Those Cadallaca records Tucker made in the late 1990s — have you played those lately? Listen to “Pocket Games” today. Holyyyyyy shit.) And all three stayed prolific and inspired after the band broke up —between their various bands, they made at least four top-notch albums in that eight-year span. But this show was a celebration of the notes only these women can hit, the notes they can hit only together.

There was no chit-chat, no wasting time, just cramming in as many tunes as possible — 23 songs in just under two hours — with none of the covers they used to throw into the set. Sleater-Kinney always loved to take on classic rock & roll warhorses live — Bob Seger’s “Night Moves,” Bruce Springsteen’s “The Promised Land,” Creedence’s “Fortunate Son.” But last night at New York’s Terminal 5, the history they wanted to claim was their own, with the unique chemistry of all three voices and those guitars. Brownstein kept busting out her rock-star kicks and spins, playing her punk sneer against Tucker’s soulful wail. A fourth musician, Katie Harkin, often pitched in on guitar or keyboard. Sleater-Kinney played most of their new album, and the best new songs — “A New Wave,” “Surface Envy,” “Price Tag” — got the same convulsive crowd response from the opening chords as the older songs. Indeed, it looked like there was a portion of the audience that knew only the new songs. 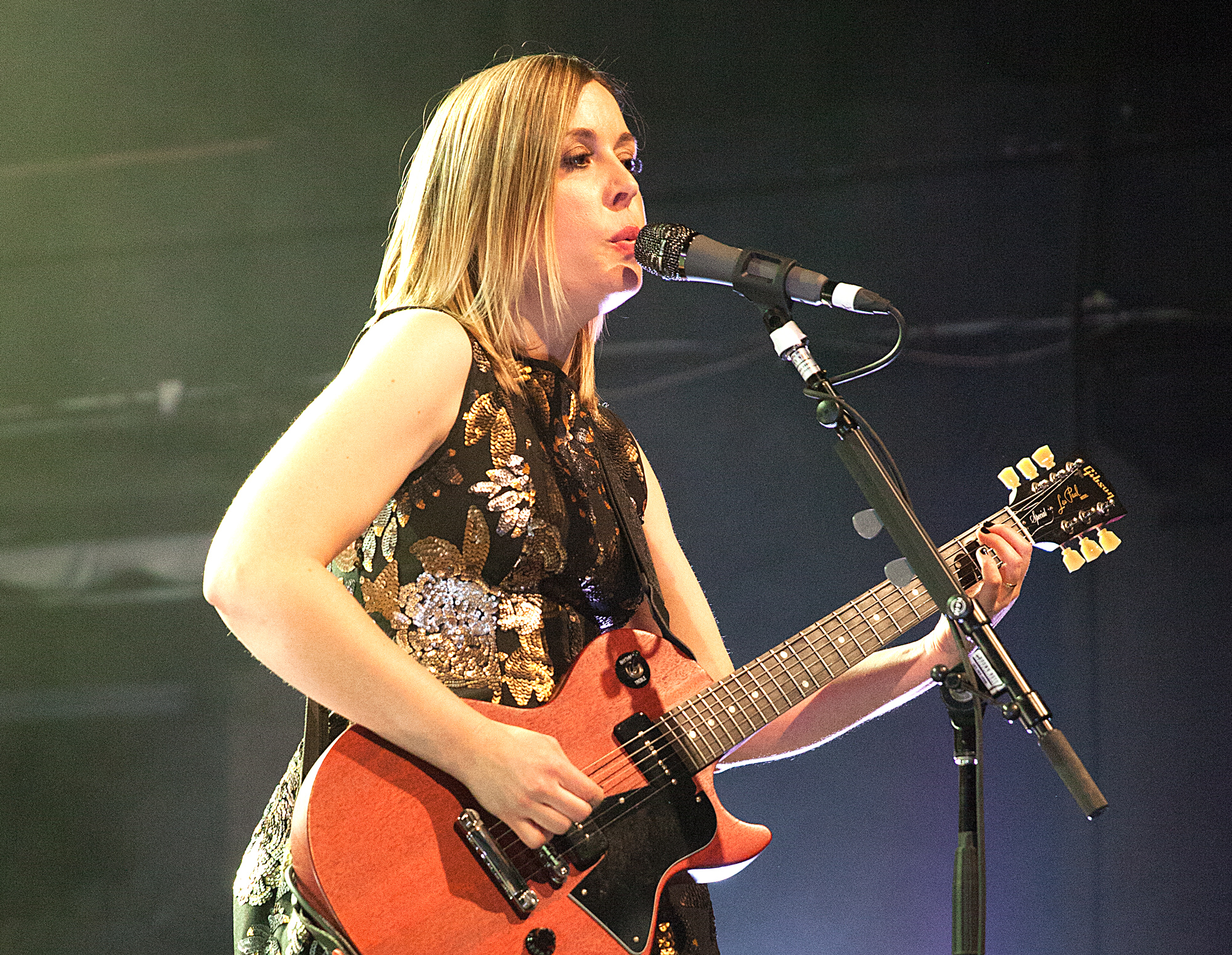 The new songs fit right into Nineties shots like “Start Together,” “The End of You” or “Words and Guitar,” along with deep cuts like “Youth Decay.” The biggest live moments were the songs from The Woods, which was as much of a surprise comeback/reunion event in 2005 as No Cities to Love is in 2015. Brownstein and Tucker met mid-stage for the twin-guitar duel in the middle of “What’s Mine Is Yours,” while “Modern Girl” became a sing-along ballad. “Entertain” was probably the most enthusiastically received crowd-killer of the night, with Brownstein ripping into nostalgia-tripping rock culture (“You come around sounding 1972/You did nothing new, 1972/Where’s the fuck you? Where’s the black and blue?”) even though all the bands she was slagging off in that song must have broken up by now. (The ’84 bands were gone even faster than the ’72 bands.)

Janet Weiss rocked her cowbell spotlight during “Sympathy,” while Tucker hit bluesy high notes that sounded absurd from a singer who’d already been wailing for over an hour. Tucker opened the encore with a statement about women’s reproductive health rights: “Quite frankly we are tired of asking for it. We want to say, gimme respect! Gimme equality! Gimme looooove!” They did nothing from their 1996 breakthrough Call the Doctor, from before Weiss joined, but saved a batch of older songs for the encore — “Turn It On,” one of the giddiest songs ever written about making a new sexual connection, slid right into “One More Hour,” one of the saddest songs ever written about love or death or pretty much anything. “One More Hour” was the final song they played at their last show in New York, their sweatbox-marathon farewell gig in the summer of 2006, and that night it sounded like a resolute let-it-go goodbye. At this show, it sounded like an urgent argument in progress, a moment to be seized.

For many fans, Sleater-Kinney represent the mystique of the Nineties rock explosion, as the last band standing who carried the torch of riot-grrrl ideals. Unlike the other great Nineties bands, they kept pushing into the 2000s, way past the point where it must have seemed to them like everybody else had gone into hiding. But what Sleater-Kinney are returning from doesn’t matter as much as what they’re returning to, which is right now. They’re not trying to revive anything — they’re just trying to keep moving, which is a much tougher trick to pull off. “Start Together” is a great title and a great slogan, but starting together is the easy part. To keep moving together — that’s a bigger ambition. And Sleater-Kinney are making it happen.