Roses. A baby girl carried onstage for a hug. Audible smooches. Hand hearts. A live marriage proposal. And, of course, all manner of grinding: on the ground, in the air, on the mic stand, to the front and to the back. Romeo Santos, bachata king, spent Friday night at Yankee Stadium humping, humping, humping away… and when he wasn’t busy seducing “Latinas, boricuas, Dominicanas”? He was administering advice to the new generation of men who have not yet mastered the art of romancing their ladies, fighting the good fight and instructing them to tell her she looks beautiful no matter what. If Santos’ wildly successful career as a bachata dreamboat ever fails (unlikely), he’s got a promising back-up career in love-coaching. The Bronx-born musician’s homecoming concert was the best date with 50,000 other people ever conceived.

Though Santos has played Madison Square Garden both solo and with his former group, Aventura, tackling Yankee Stadium’s major-league capacity for two sold-out nights was both an historic moment and a referendum. “If Madonna, if Paul McCartney, if Metallica can sell out Yankee Stadium,” Santos intoned, “Latinos can sell out this shit too!” It was a point duly made: while many English speakers have only recently begun paying  attention to Santos thanks to features on his new album, The Formula, Vol. 2, from Drake and Minaj (prior collaborations with Usher and Lil Wayne were less noticed), Bronx-born Santos is bachata’s prodigal son, a multi-platinum selling artist with an HBO Special and an especially rabid appeal in his hometown. 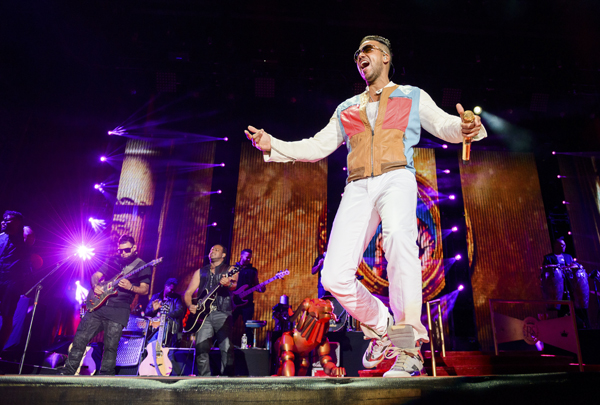 But he was clearly doing Drake a favor; the emo rap crooner who sang in Español for the occasion wishes he had the game of Santos. To deploy a dorky cliché, they don’t call him Romeo for nothing; the king of bachata, maybe the most romantic musical genre to date, is synonymous with the king of love. Yet he needed no candlelight to beguile his audience: he was lit by the glow of tens of thousands cell phones twinkling upon him under the night sky.

Emerging in a cape on a stage festooned with crowns and soft-light photos of himself projected on a screen, his stylistic adventurousness shone through on songs from his decades-long career both solo and with Aventura — “Promise,” his poppier collaboration with Usher; “Hilito,” a more traditional appeal; the reggae-influenced “Fui a Jamaica,” which he introduced with a monologue about vacationing in the Caribbean with a beautiful woman. (“Fuck clothes,” he said; even Romeo’s jokes are tailored for seduction.) He is a malleable musician and a consummate performer, his familial banter punctuated with his easy, brilliant smile and a single freaking dimple that makes would-be paramours lose their minds.

Bachata is best heard live, in which you can fully distinguish the alluring, fluid interplay between the bongos and guitars, and Santos’ 13-person band is masterful at providing the emotional backdrop he needs for his sweet come-ons. At one point during his nearly four-hour set, he instructed his guitarist to “make love to the guitar like it is one of these beautiful ladies,” before performing the Aventura song “Su Veneno,” in which he sings of a woman whose wiles may kill him but he cannot resist. As if to illustrate the point, he brought out his personal barber, who wanted to propose to his girlfriend of three years onstage, narrated by Santos; after she said sí, Santos performed “Un Beso,” one of Aventura’s biggest hits. There was never a better introduction to that song than a real-life proposal.

The show was full of surprises, though. Reggaeton god Tego Calderón showed up to perform their excellent collabo, “Trust,” followed by a mini-set of his own, including “Wasa Wasa.” When ’90s bachata innovators Luis Vargas and Antony “El Mayimbe” Santos, former rivals, dropped in for a thrilling, 45-minute-long trade-off/battle of their classics, the stadium experienced a collective heart attack, with even Santos doing the yes fist pump to emphasize his enthusiasm. He should have been. Though they’ve joined him onstage before to perform their collaboration “Debate de 4” (sans Raulín Rodríguez), this was clearly a public torch-passing, elders crowning their successor. The contrast in their styles showed how bachata has evolved, their songs more streamlined and compact and Romeo’s flusher and more honey-gooey; Vargas and Antony Santos in suits, Romeo in crispy sneakers and a sleeveless button-down. (Midway through, there was a costume change, of course.) Santos’ popularity is not just rooted in #Latinopower but in his massive multigenerational appeal — abuelas and tweens came out in equal force, entire families screaming along “Arriba arriba!” from the nosebleeds. Who else has the draw to bring out your grandma? Beyoncé? Madonna? Maybe, but not like that. The Yankees themselves are probably the closest analogy, and the last time the New York Times featured the Stadium on its front page.

Perhaps to emphasize his cross-generational appeal, the evening’s most exciting cameo was the emergence of Fefita la Grande, a.k.a. “La Vieja Fefa,” the celebrated 90-year-old merengue accordionist who is still an innovator in the style of tipica. She alternately slayed her instrument, sang and grinded on Santos, embellishing their merengue dance with through-the-legs moves before jumping on him, her tiny legs cradling his waist, while wearing black jeans with sparkles on the butt. Who wouldn’t?

But it was Santos’ finale that emphasized his persona, and exemplified why he is such a superstar. For his performance of the salacious and extremely popular “Propuesta Indecente,” he brought out a woman to serenade her, but before he hit the second verse, they had moved to a king-sized prop bed. He sang the latter half of the song from under the red velvet comforter, throwing a bra from the blanket in case anyone missed the point. The crowd, tittering and titillated, screamed “Ro-me-o!” into the night.