The world-premiere production of Another Brick in the Wall: L’Opéra got a standing ovation at the Opéra de Montréal before the orchestra even tuned up last night. It happened when it was announced that the work’s librettist, former Pink Floyd singer and songwriter Roger Waters, was in attendance.

It was a remarkable moment since it was nearly 40 years ago in this city that Waters, feeling bemused by rowdy stadium audiences, took out his anger on a concertgoer and, according to legend, spat in his face. The embarrassment he felt afterwards inspired him to write The Wall, which has since become a double LP, a movie and eye-popping concert tours by Floyd and Waters. Now, it’s a modern opera – using some of Floyd’s original music, but mostly delving into atonal territory – and it’s part of Montreal’s 375th-anniversary celebrations, complete with appreciations in the program by both the city’s mayor and Quebec’s minister for the region.

Although the production contains the same songs and running order as the original, the story of The Wall comes into better focus here. The opera shows the revelations of a shell-shocked rock star, so disgusted with himself that he retreats into his mind to find out why he feels so dejected, often watching his past in this-is-your-life–style flashbacks. Sure, that’s also the basic plot of the album, but seeing it acted out with different characters singing the songs, as opposed to just Waters, fleshes it out anew much like the Who did when they turned Tommy into a movie.

In Another Brick, the protagonist, Pink (brilliantly played by baritone Étienne Dupuis), is now able to duet with his mom (soprano France Bellemare) in the song “Mother.” There’s also his saucy, money-obsessed wife (soprano Caroline Bleau) and the sadistic teacher (tenor Dominic Lorange, who gets to sing the album’s funniest line, “If you don’t eat your meat …,” which is also written on a blackboard onstage), and both sing their own parts when it gets to “The Trial.” And, best yet, the daddy who “flies across the ocean, leaving just a memory” is a flesh-and-blood character here (tenor Jean-Michel Richer), interacting with Pink as a boy. 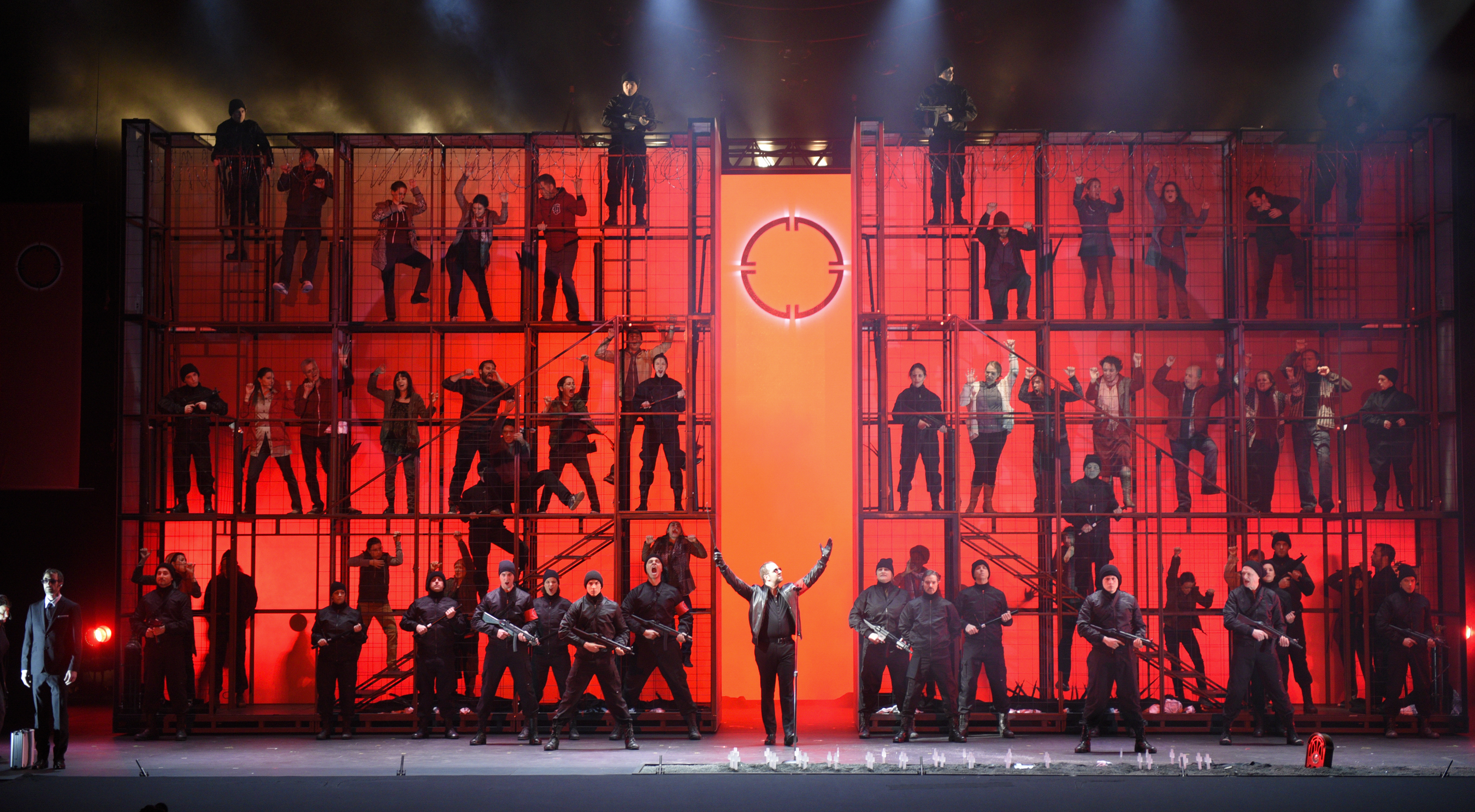 There’s also the benefit of the nearly 50-person choir who not only make the production grander and generally louder (though, as Waters has proved in recent years, it could always be even louder). They clamber the titular wall, they reenact battle scenes, they run like hell. Occasionally, their actions come off corny (running in place), but because it’s opera – and not a jukebox musical on Broadway (we can thank the great Syd in the sky for that one) – the music commands an air of solemnity.

To his credit, composer Julien Bilodeau built his own Wall, musically, using only a few bricks from Floyd. Many of the numbers are wholly unrecognizable. Big blocks of strings climb over tumultuous brass during the chaos of “In the Flesh,” as Pink in slow motion expectorates on one of his loyal subjects. A mini-choir of groupie trollops desperately sing “Young Lust” with Pink. The “We would meet again some sunny day” part of “Vera” is now a Roaring Twenties hot-jazz rave-up – leading to a moving, full-company rendition of “Bring the Boys Back Home,” complete with a display of the Eisenhower quote Waters was projecting on the wall of his most recent tour. And best of all, “Comfortably Numb” is set to flurrying, minimalist strings, allowing Dupuis to turn the line “I have become comfortably numb” into a standout aria with an ascending melody divorced from David Gilmour’s voice.

Also, notable is the starkly different approach to the “Nazi” sequences in the second act. That section of The Wall was always unsettling, but hearing it recontextualized – such as when Pink sings of “the final solution” and orders police to chase down a woman in a hijab and an African-American man – makes it even more disturbing and all the more powerful as a work decrying dictatorship and egoism.

Although it’s sometimes hard not to sing the original songs to yourself in your head while watching Another Brick in the Wall, for the sake of comparison, the differences between the two just go to show how far Bilodeau was willing to go. But that’s not to say he drafted new blueprints altogether. “Mother” and “Young Lust” still featured the same vocal melodies, and “The Trial” – the magnificent piece of melodrama that Bob Ezrin orchestrated – remains almost entirely intact (where’s the “Go on, judge, shit on him” operatic rejoinder?), though here, it’s led by a judge dressed as an oversized raven. 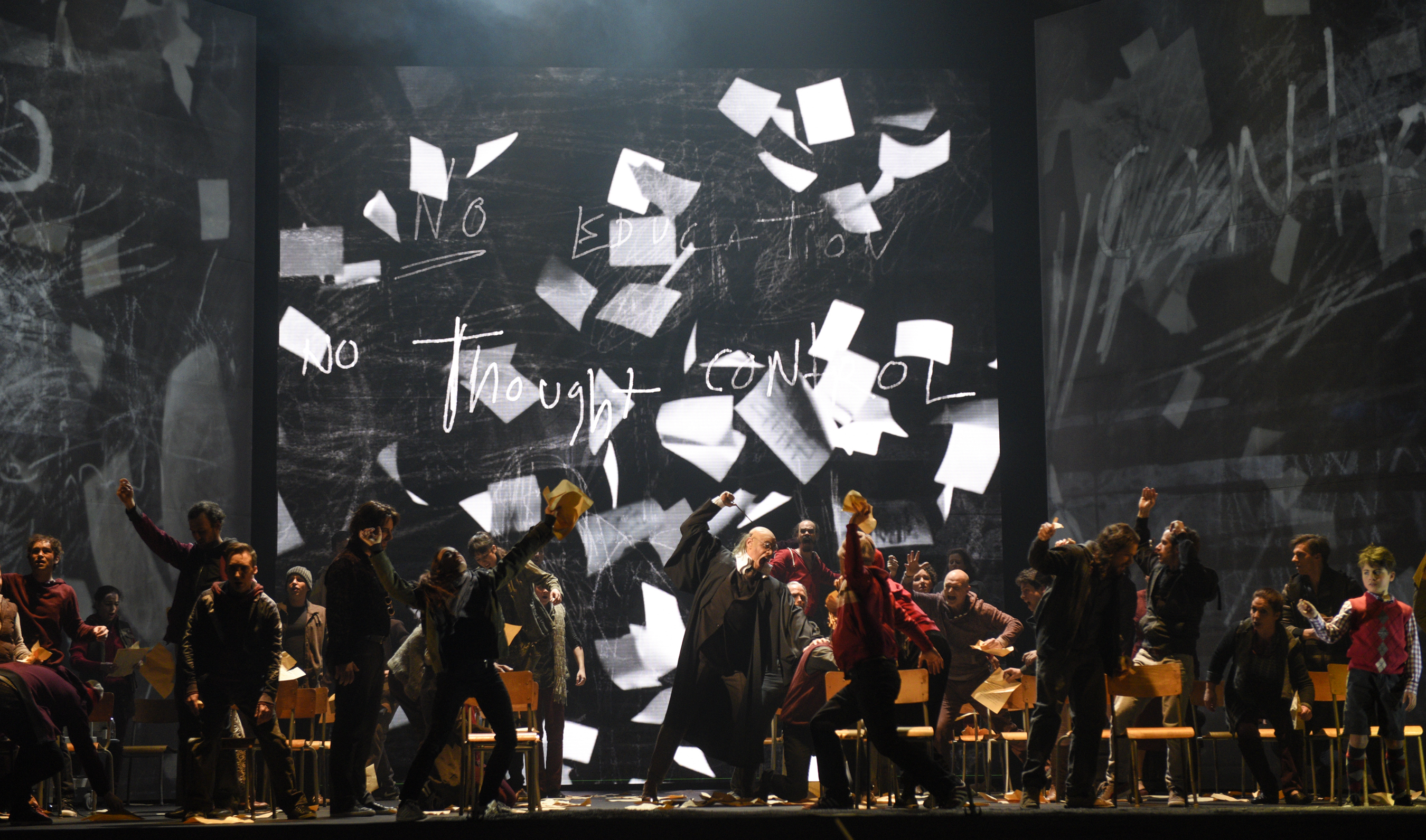 The giant bird is grotesque and strange – and the other characters in “The Trial” now wear raven costumes – but not so bizarre for opera, where fantastical conceptual costumes can be the norm. For the most part, though, Another Brick in the Wall rarely drifts into outright surrealism. The set features giant LED screens that depict Pink Floyd’s legendary circular projection screen, showing baby bottles against a starry night for “The Thin Ice” and the company’s “Nazi” insignia (here, a crosshair instead of The Wall’s usual hammers). The choir members dress as nurses, hippies and concertgoers, and they all come out en masse like a scene from something by Verdi for the final number, “Outside the Wall.”

There were no Vikings, no fat ladies singing to show the production was over, but Bilodeau and his collaborators accomplished what they intended: They transformed rock & roll into pure opera. And it was a mostly original work – where the Floyd album ran roughly 80 minutes, Another Brick takes its time at close to two hours, sometimes dragging in a few spots but overall holding onto the emotion of the source material. It likely won’t appeal to the average classic-rock FM listener but hardcore Floydiacs were buying T-shirts and posters at near-arena prices. The audience looked like a mix of older, buttoned-up operagoers, ready to see Puccini’s La Bohème and Tosca later this season, with the odd rock-looking dude in a hoodie or Sons of Anarchy vest and jeans.

The one thing they all had in common, though, was that when the wall came down, the entire audience was on its feet for another standing ovation, with concertgoers shouting “wow” and “bravo.” Judging from the reaction, it’s another brick that’s here to stay.