The Beatles‘ last-ever concert happened in August of 1966, at San Francisco’s Candlestick Park. Home for decades to the Giants and the 49ers, the open-air venue now faces imminent demolition, and last night, Paul McCartney – dressed like a dandyish undertaker in a maroon topcoat with floral kimono-print trim at the cuffs – returned to Candlestick for a show promoted as the venue’s last major event. “It’s sad to see the old place closing down,” McCartney said from the stage, “but we’re going to close it down in style.”

At 72, spry and impish as ever, McCartney has become the curator, when he performs, of a surprisingly raucous museum about himself. His concerts, which he still plays with gusto, are significantly backwards-facing in tone and song choice; this one, with its requiem-for-a-stadium framing, was especially so. Before McCartney emerged, around nine o’clock, a nostalgia-steeped photo collage – Paul working a mixing console with Ringo, Paul horsing around on his Scottish farm, portraits of John, Hendrix, Jagger, Linda, Ali MacGraw – scrolled upward on enormous screens. The speakers pumped out unlikely Beatles covers and remixes, from kitschy foreign versions to thudding house music takes.

McCartney is touring, nominally, in support of his strong 2013 solo album, New, but his set last night went heavy on Beatles and Wings cuts – plunging deep from “I Saw Her Standing There” and “Maybe I’m Amazed” down to “Lovely Rita” and “Nineteen Hundred and Eighty Five.” Songs doubled as exhibits: He played “Paperback Writer” on the same guitar he’d used to record the song. Between-song banter doubled as a docent’s monologue: He told a story about Jimi Hendrix covering “Sgt. Pepper’s Lonely Hearts Club Band” at a 1967 concert, days after the record came out, and asking Eric Clapton, who was in the crowd, to come up and help him tune his guitar.

When we watch Paul McCartney perform these days, we want to see archival material exhumed and reanimated, and what gave life to the set list last night varied from song to song. McCartney has been playing for several years now with a crack band of hired guns who know better than to slather their virtuosity on too thick, beefing up beloved compositions without rendering them steroidal. (One dazzling and forgivably grandiose exception came toward the end, when they hurled themselves around in time to a barrage of fireworks and flame-belching pyrotechnic cannons on “Live and Let Die”.) McCartney himself, whose voice shows age but is still in remarkably fine form, remains a consummate ham, shooting finger pistols at the cheap seats; performing a George Harrison tribute, winningly, on ukelele; wiggling his ass in skinny black Acne jeans long enough for the camera operators to get in tight for a Jumbotron close-up. 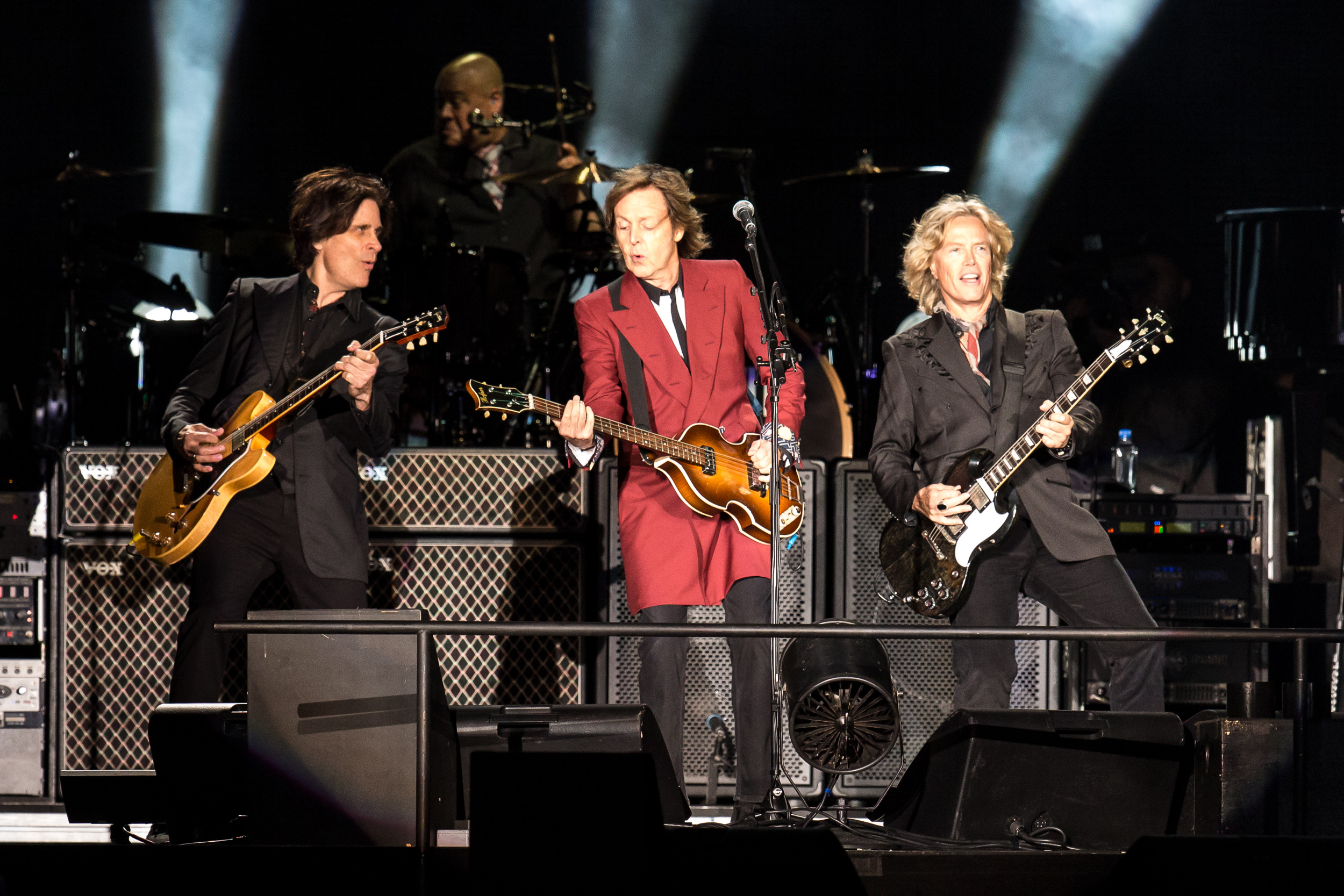 But certain songs took new and surprisingly messy life from factors wholly beyond McCartney’s control. His performance coincided, of course, with the fifth night of unrest in Ferguson, Missouri, where mostly white police forces had been firing rubber bullets and tear-gas canisters at mostly black residents amassed in protest over the shooting death of Michael Brown – an unarmed black teenager killed by a police officer earlier this month. McCartney prefaced “Blackbird” with a few words about the “civil rights troubles, particularly in the South,” that inspired the song and attended the Beatles’ 1966 tour. McCartney didn’t need to focus his gaze southward, of course, to find injustice: He could have pointed out past the parking lot. In September of 1966, just one month after the Beatles played Candlestick, police shot and killed an unarmed black teenager in Bayview-Hunters Point – the same benighted neighborhood that houses the stadium – and set off a wave of rioting and demonstration policed by rifle-toting National Guardsmen. Today, Hunters Point remains a predominantly black, impoverished and polluted nub of a city splashing with wealth.

In McCartney’s remarks about civil rights, he did not make an explicit connection to Ferguson, but it was there for the taking. Yesterday morning, images spread on social media that juxtaposed photographs of Sixties-era racial unrest – and the government’s militarized crackdown on blacks in city streets – with jarringly similar pictures from Missouri. “Blackbird” is a lovely song written by a wealthy white Briton who wanted, as McCartney put it last night, to give oppressed blacks “a little hope.” Part of the song’s majesty is that, in its own elegant way, it critiques the paternalism inherent in that gesture: “Take these broken wings and learn to fly,” the refrain goes, casting an act of ostensible gift-giving as an act of violent disadvantaging, too. As McCartney played the song it was no dead relic of a regrettable history we’ve put neatly behind us – it was as though a wormhole had opened in what was otherwise an upbeat stroll down memory lane, connecting and collapsing ugly past and ugly present into one another.