Rock of real ambition and history can never just be about nostalgia. For Nine Inch Nails and Soundgarden, the push forward continues decades after each band emerged from disparate underground rock scenes. And now the pair have teamed for their first co-headlining tour, which opened last night in Las Vegas, at the AXIS at Planet Hollywood Resort & Casino. Borrowing the venue’s big stage for a night from Britney Spears’ ongoing residency at the 4,600-capacity room, NIN and Soundgarden took fans backward and into the new and unknown well beyond the radio hits.

NIN’s set began with Trent Reznor suddenly marching alone to a bare, starkly lit stage with no fanfare or introduction. Standing beside a light stand with a single burning bulb, the band leader leaned hard into a sequencer, looking like he was back to playing industrial warehouse parties. But the song was “Copy of A,” an urgent new track from last year’s Hesitation Marks album.

One by one, the rest of the band joined him, pounding at their instruments, their shadows looming large and ominous against the white curtain behind them. It was just the opening scene from a night of increasingly intense and complex stagecraft.

To relentless, clattering electro beats and a bass line played by Ilan Rubin, Reznor railed of obsession on 1989’s “Sanctified”: “I am justified, I am purified, I am sanctified, inside you…” On the latest album’s “Came Back Haunted,” Reznor nearly doubled over in desperation as he grabbed the mic with both hands, shouting of compulsion and its consequences. (For much of the night, Rubin switched to drums, pounding like Dave Grohl at full throttle.)

As he sang 1994’s wounded and defiant “Piggy” at the foot of the stage, a crew member held a light close to Reznor’s face during a gospel-like hum on synths. “Nothing can stop me now,” sang Reznor, who then played a piano melody in the playfully broken style of essential Bowie (and NIN) sideman Mike Garson. On 1989’s “Terrible Lie,” Reznor sang nearly a cappella before erupting with a storm of guitar and electronics.

“As you may have noticed, some things are fucking up up here,” Reznor said during a pause in the tour’s opening night set, but so much was going right, it was hard to tell what exactly was so wrong. He also noted that this would be Nine Inch Nails’ last tour “for a long time.”

Fans shouted along as loudly to non-radio hits, but the set-closing “Hurt” cut especially deep, as Reznor sang his words of self-loathing and broken humanity accompanied by images of dangerous animals mingled with footage of nuclear explosions, executions and concentration camps. It was a fittingly bleak and timeless message for a terrible week around the globe. 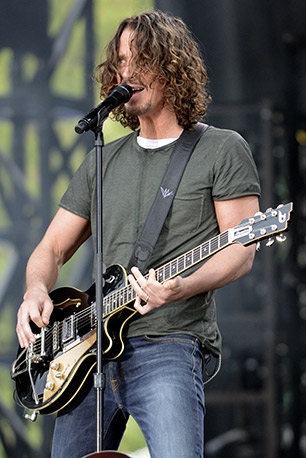 Earlier, Soundgarden began their set with the slash and grind of 1991’s “Searching With My Good Eye Closed,” with Kim Thayil riffing deep into the grunge as Ben Shepherd wandered the aisles with his bass, and red storm clouds roiled across the big screen. It was molten rock with a postpunk sensibility, a sound that two decades before had epitomized a new voice and generation.

“When we started as a band almost 30 years ago, and we started writing songs that were a little bit moody and depressing to a lot of people — that somehow caught on and there was a whole generation of people that understood how we felt,” singer Chris Cornell told the crowd. “Right now, dance music is really popular and people like to have fun when they listen to music and have a positive outlook. That’s great, but it doesn’t seem like the world is better. We all have our own way of dealing with it.”

The intervening years were nowhere in his voice or presence, still rock god trim in long hair and goatee, his wail on a tense “Spoonman” sharp and muscular. To his right was Thayil, in a Mastodon T-shirt and a cap pulled over his ponytail, leaning into his amps for blasts of melody and feedback. Thunderous beats were delivered by Matt Chamberlain, filling in for Matt Cameron, currently on the road for his other job, Pearl Jam.

Not surprisingly, the heart of Soundgarden’s set were songs from Superunknown, the band’s multi-platinum breakthrough album in 1994, which they’ve performed in full (and in order) at least twice this year in celebration of its 20th anniversary reissue. But on Saturday, the band was more alive and better paced with a mixed, wider-ranging set stretching from its late-Eighties grunge birth to their 2012 reunion album, King Animal.

“Fell on Black Days” shimmered with a darkness appropriate to real world events now and forever, closing with a blast of staccato guitar from Thayil. Also from Superunknown came the Sabbath grime of “Let Me Drown,” a sweeping atmospheric “Like Suicide” and a “My Wave” as heavy as it was melodic, equally ready for the arena and pop radio.

“Black Hole Sun” unfurled with Cornell in silhouette plucking the grim opening melody on his guitar, his voice rising as the big screen depicted open fields of nature slowly overtaken by gray industrial blight. There were hints of Spanish guitar within the speedy flurry of notes in Thayil’s ascending patterns on “A Thousand Days Before” (from King Animal), as Cornell led a wail and response with the crowd, swaying to the music, carrying the mic stand with him.

Soon after, Soundgarden closed with 1988’s “Beyond the Wheel,” as Shepherd dug deeper into the groove, crouching with his bass and clawing at the strings. When a crew member ran to him, Shepherd shoved him back, then kicked over one of his own monitors, before pushing over his wall of amps and exiting. Thayil ignited an undulating storm of feedback and waved goodbye as the noise continued, still roaring decades after it began.