This year’s 59th edition of Rhode Island’s Newport Folk Festival provided another continuous three-day dose of first-rate music, thanks to an inspired and unpredictable lineup. Featuring a list of unannounced artists that included everyone from pop-leaning breakout stars Maggie Rogers and Leon Bridges to beloved legends Mavis Staples and John Prine, the festival was brimming with constant surprise collaboration and companionship, culminating in Mumford & Sons’ unannounced headlining set on Saturday evening. Between the youthful musings of Phoebe Bridgers, the veteran wisdom of Toots and the Maytals, the gospel-R&B revivalism of the War and Treaty, and the trailblazing triumph of Patrick Haggerty (Lavender Country), 2018’s fest provided a wealth of thrilling moments and noteworthy highlights. Here are a dozen of the best things we saw:

Mumford Bows to Mavis
Nearly 90 minutes into their surprise Saturday-night headlining set, Mumford & Sons provided the rapt crowd with one more unexpected high point when Staples took the stage to lead the overflowing main-stage audience through a requisite feel-good singalong of “The Weight.” Aided by a cadre of admirers including M.C. Taylor, Brandi Carlile and Bridgers, Mavis & Sons offered a thrilling, ramshackle version of the well-worn Newport standard. But “The Weight” was just one key moment during Mumfords’ greatest-hits set, which temporarily gave Newport the feel of a large-scale mainstream festival as the band, aided by Jerry Douglas, ran through old favorites like “I Will Wait” and “Little Lion Man” with arena-scale splendor. The group also took care to cater its set to the occasion, covering Simon and Garfunkel and Radiohead before ceding the stage to unannounced folk-pop phenom Rogers for a stripped-down rendition of her breakthrough song “Alaska.” After helping to launch folk’s commercial and critical resurgence during the past decade, Mumfords’ debut at Newport was both inevitable and long overdue. J.B. 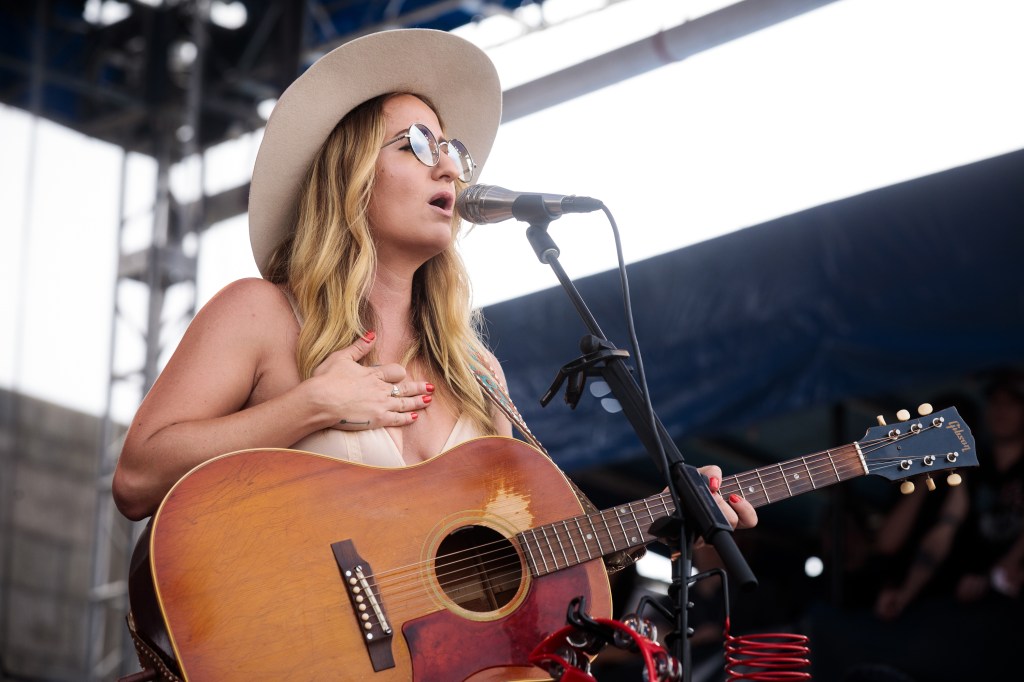 Margo Price Earns Future Headliner Status
Friday was dominated by country music, a themed day of Nashville-related acts that included the hard-edged Kentucky sounds of Tyler Childers and the revved-up country-soul of Sturgill Simpson. But no one represented that strand of music better than Margo Price, who began her main-stage performance by receiving a surprise introduction from John Prine. “Let’s go back to Tennessee” were the first words Price sang, and she held true to that principle: Price and her razor-sharp six-piece backing band served as swaggering country ambassadors, offering a blend of honky-tonk, country rock and roadhouse blues as Price moved among guitar, piano, drums and tambourine. She proved her rock-star bona fides during a three-song run that went straight from a soaring, Bowie-indebted jam on “Cocaine Cowboys” to an earnest solo-piano rendition of “All American Made” (including an updated lyric about the border crisis) before landing on a crowd-pleasing duet with Prine on “In Spite of Ourselves.” “Maybe one day we’ll let the women headline the festival,” Price said before being joined by Brandi Carlile for a cover of Dolly Parton’s “9 to 5.” After her main-stage debut, Price is well on her way to making that hope a reality. J.B.

Low Cut Connie Pay Raucous Tribute to Tom Petty
The Philly rock & roll revivalists weren’t going to let Saturday’s brutal noontime heat get them down. The band’s frontman, Adam Weiner, called the crowd “sexy motherfuckers” and jumped on top of his piano in a gold jacket, all before 11:15 a.m. The band turned the Quad stage into its own twisted, pot-reeking church, blasting through fun, rollicking tracks like “Shake it Little Tina” and “Dirty Water.” Weiner’s jacket was off by the time he dedicated the next song to Tom Petty, and led a huge singalong of Echo’s “Free Girl Now.” With Petty gone for a year now, it’s good to see his legacy alive in a fun band like this. P.D. 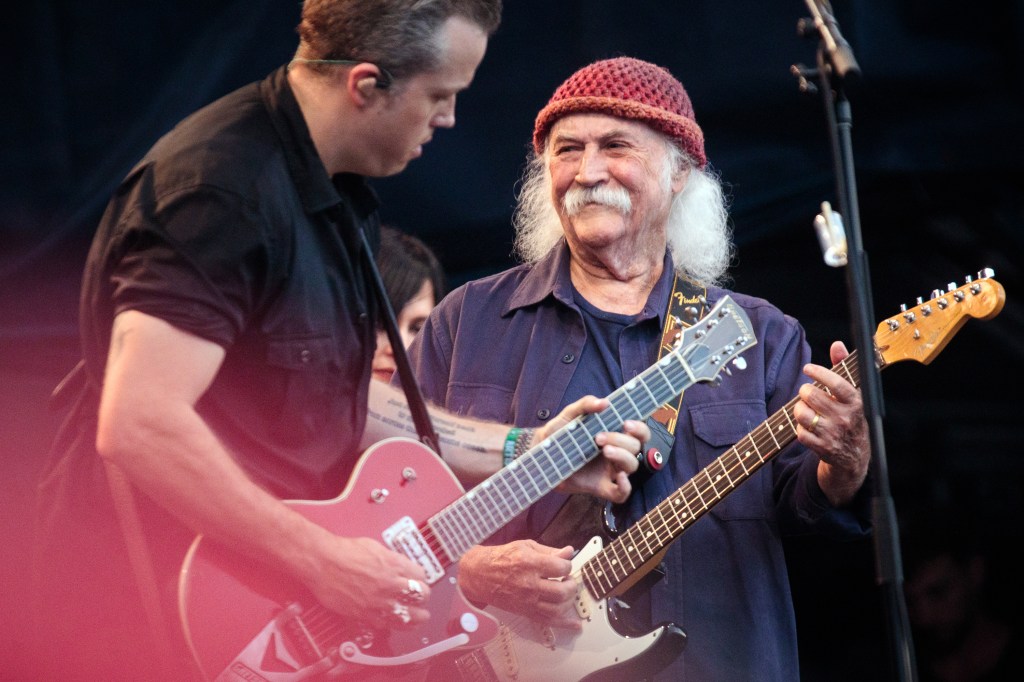 David Crosby and Jason Isbell Recast the Sixties
Newport Folk Fest is at its best when bridging the gap between generations. And with precious few artists representing the fest’s storied Sixties past on hand this year, Jason Isbell provided a surprisingly powerful moment of intergenerational solidarity when he invited fellow Twitter aficionado David Crosby onstage during his band’s headlining set. Introducing the 76-year-old as a foundational folk-rock influence, Isbell ceded the spotlight to Crosby for the final two songs of his performance. The duo offered a fiery rendition of CSN’s “Wooden Ships” before launching into “Ohio.” The latter, which was also reinvented by Leon Bridges as a mournful blues two nights later, has become a well-worn stand-in for Sixties activist nostalgia, but Isbell and Crosby reclaimed the song as a powerful contemporary statement. “These are songs that we need right now,” Isbell said beforehand. “They help connect us to the people who were fighting the same things 30, 40 years ago.” J.B.

Kaia Kater Reimagines Traditional Folk
Over the past decade, Newport has actively worked to expand the sonic and spiritual boundaries of what constitutes folk music, welcoming in genres ranging from punk to reggae to electro-pop. But one of the most powerful performances at this year’s festival came from Kaia Kater, a young old-time singer whose historical-minded music works to reshape and reanimate folk music from the inside out. Singing a mix of traditional songs and originals from her 2016 standout, Nine Pin, Kater merged her French-Canadian roots with her deep Appalachian influences. Kater, performing alongside standup bassist Andrew Ryan, used ages-old song forms to tell new stories on standouts “Saint Elizabeth” and “The Heavenly Track,” the latter a preview of her upcoming album on Smithsonian Folkways. J.B. 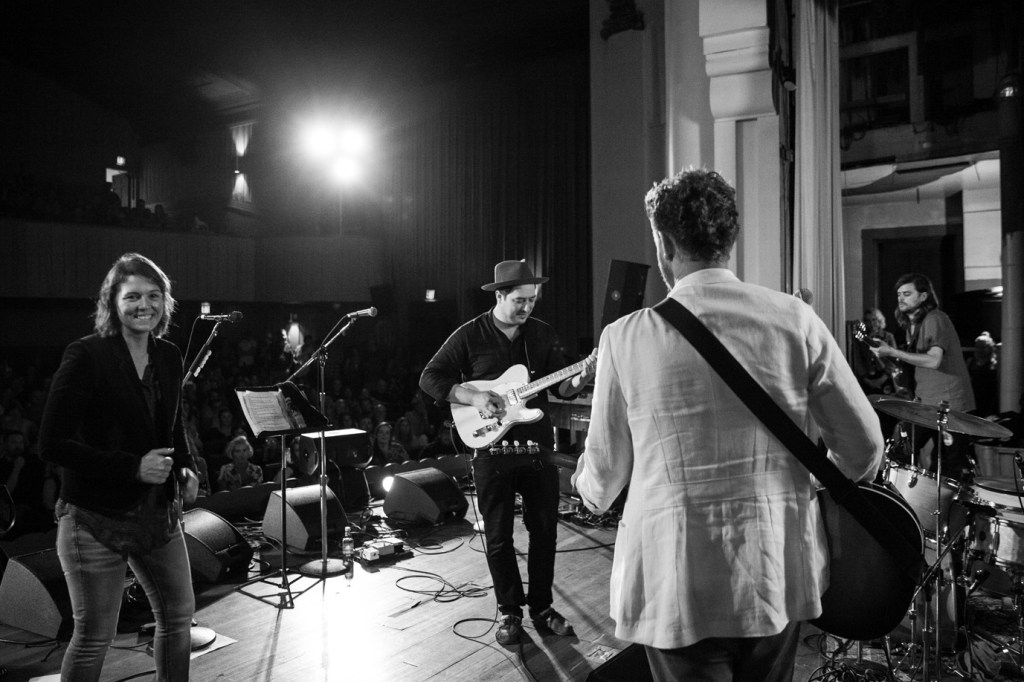 The Cook Brothers Host an All-Star Covers Party
The environment at Newport Folk allows for a unique level of spontaneous collaboration between artists looking to pay tribute to shared influences. Nowhere was that more evident than Friday evening’s afterparty benefit concert at the Jane Pickens Theater, where the Cook Brothers played host to an unforgettable marathon of all-star performances and tribute performances. Amanda Shires performed a breathtaking version of Songs: Ohia’s “Just Be Simple,” then later joined John Prine during the legend’s surprise five-song set for a haunting duet on “Clocks and Spoons.” Elsewhere, Margo Price covered Creedence (“Wrote a Song for Everyone”), Courtney Barnett paid tribute to Gillian Welch (“Everything Is Free”), Moses Sumney transformed Ray LaMontagne’s “Wild Horses,” and Lucius honored the Kinks (“Strangers”). This was all before Mumford & Sons joined Hiss Golden Messenger for a series of Welch and Bruce Springsteen songs. The two-hour-plus extravaganza was the weekend’s most unforgettable collaborative event. J.B.

Brandi Carlile Channels Joan, Joni and Janis
After spending the entire weekend as the festival’s go-to duet partner, joining everyone from Lucius to Margo Price to Mumford & Sons, Brandi Carlile finally took the stage late Sunday afternoon for a performance of her own. Drawing on highlights from her mainstream breakthrough, By the Way, I Forgive You, Carlile’s set was a blend of plainspoken pathos and swaggering rock-star grandeur: She played a spellbinding version of Joni Mitchell’s “A Case of You” before channeling both Joan Baez and Janis Joplin on her Zeppelin-indebted hard-rock version of the folk standard “Babe, I’m Gonna Leave You.” Other than that, Carlile primarily stuck to her own openhearted offerings, closing the show with a one-two punch of her Elton-esque “Party of One” and the feel-good hootenanny “Hold Out Your Hand.” J.B.

Valerie June Delivers an American Roots Master Class
“Iridescent, kinda sparkly, kinda fluffy, and it’s got soul,” is how Tennessee singer-songwriter Valerie June described her music to the main-stage crowd Saturday afternoon. June was selling herself short: Her performance provided the festival with a vital, contemporary blend of American roots styles, from deep astral soul (“Love You Once Made”) to stomping Southern blues (“Shake Down”), old-time country (“Tennessee Time”) and transcendent banjo-laced R&B (“Got Soul”). The 36-year-old singer alternated between banjo and electric guitar during her no-nonsense performance, eschewing spectacle as she drew primarily on last year’s ethereal folk hybrid The Order of Time. J.B. 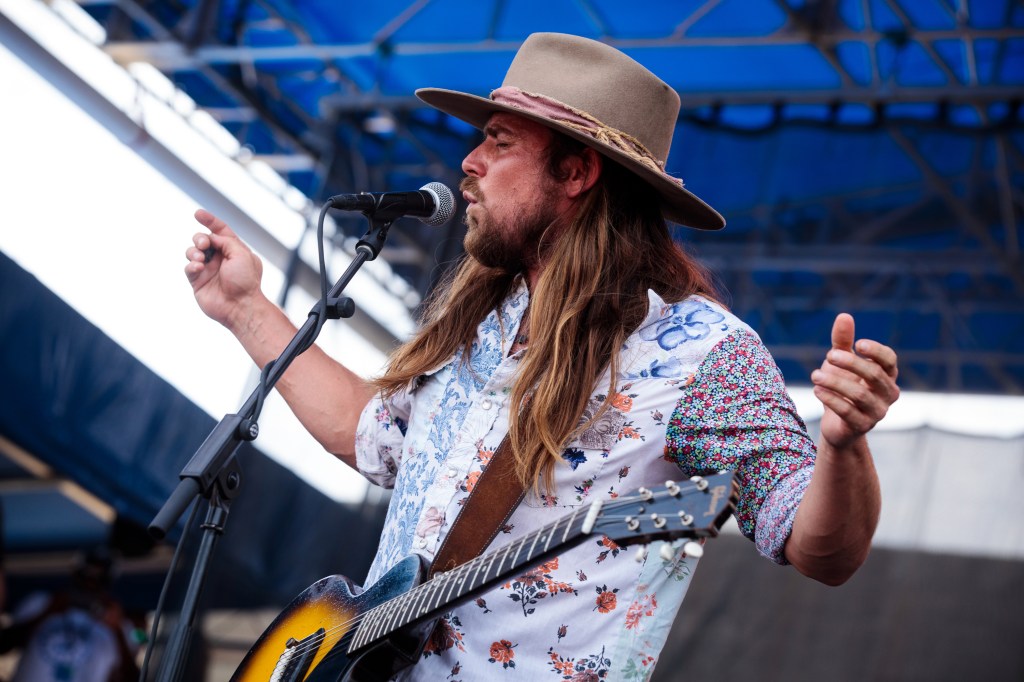 Lukas Nelson and Promise of the Real Show Off the Full Range of Their Powers
“Here’s a song I wrote about space travel a few days ago,” Lukas Nelson said, opening up his 12:30pm Fort Stage set, before playing a slow, organ-soaked jam about escaping the world with a lover. It was bold to begin a main-stage performance with a brand-new song, but these sort of moves are why Nelson is quickly becoming one of the most exciting live acts out there today. The songs from his 2017 self-titled album sounded well-worn and loose; the fun country diary “Four Letter Word” opened up into a fiery jam, Nelson dropping to his knees at the sound of a snare hit, getting up and playing licks that combined B.B. King vibrato with his dad Willie’s hill-country gypsy-style guitar. The jam ended with the melody of the Beatles’ “I Want You,” and Nelson was hopping up and down, grinning. Other peaks included when he invited Lucius up for the gospel meditation “Set Me Down on a Cloud” and the funk stomp “Find Yourself.” Nelson introduced that song while mentioning that he and his band will be appearing in the upcoming remake of A Star Is Born, alongside Lady Gaga. After that exposure, and performances like these, they probably won’t be playing festival slots this early. P.D.

Khruangbin’s Surf Funk Circumvents Folk Conventions
“You don’t have to get up,” guitarist Mark Speer told the crowd during one of their standing ovations for his group Khruangbin. “I appreciate that, though.” The Houston trio, rounded out by Laura Lee on bass and Donald Johnson Jr. on drums, delivered an unexpectedly arresting set during their Sunday side-stage performance that blended surf rock, retro Thai funk, disco and soul instrumentals on hybrid originals like “Evan Finds the Third Room” and “Two Fish and an Elephant.” The group also delivered a particularly crowd-pleasing medley of classic G-funk from Dr. Dre, Warren G and Nate Dogg, a gesture that felt slyly subversive at a festival that’s been noticeably slow to welcome hip-hop into its increasingly broadening definition of folk music. J.B. 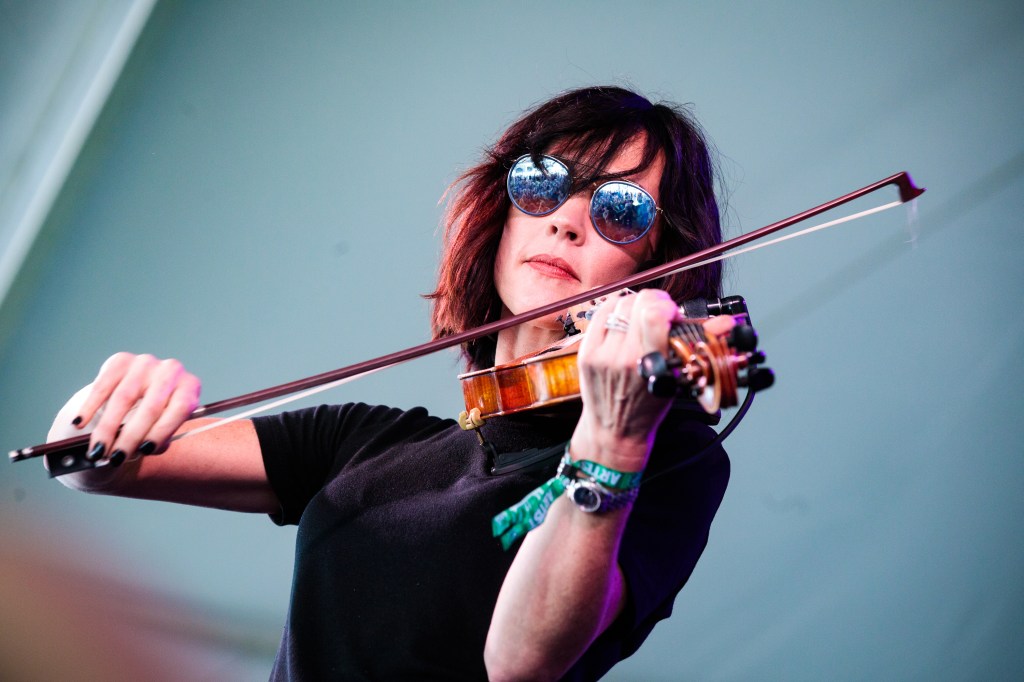 Amanda Shires Debuts Stunning New Album
One of Newport’s best qualities is the extent to which audiences treat the weekend’s roster of music with quiet attentiveness. Singer-songwriter-fiddler Amanda Shires took advantage of the setting when she kicked off the festival Friday midday by debuting the bulk of her masterful new rock-leaning LP, To the Sunset, in front of a rapt side-stage crowd. Adding drum machines, synths and plenty of guitar to her unmistakable West Texas warble on new highlights “Leave It Alone,” “White Feather” and “Parking Lot Pirouette,” Shires’ set was the subtle triumph of a folk-roots artist seeking to modernize her approach. Husband Jason Isbell (introduced as “Mr. Shires”) joined the singer for two highlights from Shires’ 2013 LP, Down Fell the Doves, but it was the new material that made the set one of the most exciting singer-songwriter expositions of the weekend. J.B.

Jon Batiste’s Songs for Change Singalong
To close this year’s festival, Jon Batiste led a rotating cast of singers and musicians during his Sunday-evening performance with the Dap-Kings, billed as “A Change Is Gonna Come.” Rachel Price of Lake Street Dive sang an admirably reverent rendition of the title song, Valerie June delivered a moving take on “I Wish I Knew How It Would Feel to Be Free,” and Chris Thile and Leon Bridges teamed up with the Preservation Hall Jazz Band for a thrilling statement with their hybrid bluegrass-meets-NOLA rendition of “I’ll Fly Away.” But the highlight during the occasionally mild-mannered set of songs of social change came late, when Mavis Staples teamed up with Brittany Howard for an enraptured duet of the gospel standard “Jesus on the Mainline” before inviting the day’s performers out for an ensemble performance of the Staple Singers’ signature “Freedom Highway.” Four years after she closed out the festival for her 75th birthday, in 2014, there was once again no more fitting a host for this year’s Newport finale than Staples herself. J.B.