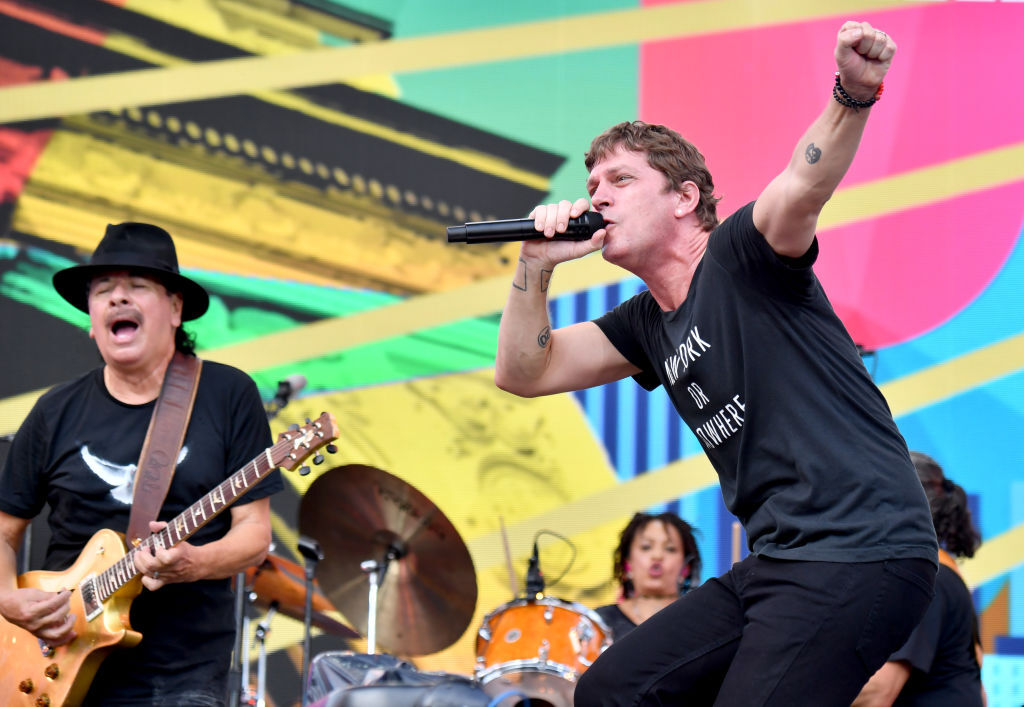 Don’t call it a comeback, since it wasn’t quite that.

On Saturday evening, the long-awaited “We Love NYC: The Homecoming Concert” in New York’s Central Park became an unintentional metaphor for the ongoing pandemic when the all-star show was shut down and later cancelled less than halfway through by a vicious rainstorm. Amid confusion over whether the concert would continue, more than 60,000 concertgoers were told to exit the park before they’d had a chance to see headliners like Paul Simon, Bruce Springsteen, Elvis Costello and the Killers.

Announced earlier in the summer, the concert was intended to celebrate the reopening of the city, which had been especially slammed during the early months of the pandemic. Other acts included Barry Manilow, Journey, Earth Wind & Fire, Carlos Santana, Jennifer Hudson, and LL Cool J, who were all able to perform before the storm. Despite Covid hospitalizations and rising cases in New York over the last month, the show went ahead.

Ironically, Manilow was about to begin his vintage hit “I Made It Through the Rain” around 7:30 p.m. when an announcer cut into the feed, telling the crowd that it would have to leave the park immediately due to inclement weather. Concertgoers were only advised to seek shelter, including in their cars, and there was initially no word about whether the show was officially cancelled. Park rangers told some attendees that the night was over, but Mayor Bill de Blasio — who had been booed by some in the crowd as he was introducing Earth, Wind and Fire — was seen onstage announcing that the concert would resume. By then, thousands were streaming out of the crowd in the downpour.

De Blasio conceived the concert, then enlisted veteran music exec Clive Davis to pull the show together. Despite the ongoing pandemic as well as an incoming hurricane, everything was orderly at the outset. Attendees had to present proof of Covid-19 vaccinations to enter the park (most did not wear masks once they entered, however), and a casual, feel-good vibe wafted through the audience. (At concession stands, chicken salad wraps were also a reasonable $9.)

The concert opened with the New York Philharmonic playing George Gershwin’s “Rhapsody in Blue” and instrumental renditions of Big Apple anthems like “New York, New York,” “New York State of Mind” and Christopher Cross’ “Arthur’s Theme (Best That You Can Do).” During that extended opening segment, during which the sun finally burst through a cloudy day, the orchestra accompanied Jennifer Hudson. Rather than sing one of her own hits, Hudson, who currently stars as Aretha Franklin in Respect, opted for an impressive rendition of “Nessun Dorma” — the same classical piece Franklin had performed at the Grammys in 1998.

Due to logistics or schedules, only about half of the performers were associated with New York and its boroughs. Journey offered up revved-up versions of “Any Way You Want It” and “Don’t Stop Believin’,” and Earth, Wind and Fire sounded splendid doing “September.” Those moments were tight and professional but — as with Carlos Santana and the Product G&B reprising their 1999 hit “Maria Maria” with Wyclef Jean — they seemed more like moments out of any generic all-star concert regardless of location. (Oddly, many of the introductions of these and other acts mentioned their sales figures: Hearing Senator Chuck Schumer tell us that Journey has sold “80 million” records was one of the evening’s several surreal moments.)

The most memorable moments before the shutdown came from the hometown talent. An “LL Cool J and Friends” segment became a trip down hip-hop memory lane: Grandmaster Flash and the Furious Five’s Scorpio and Melle Mel reprised their landmark early-rap classic “The Message” (“it makes me wonder how I keep from going under” sounded especially relevant during a pandemic). LL himself spit “Mama Said Knock You Out” with more ferocity than he’s summoned in his music in years. Brooklyn homeboy Manilow introduced “Copacabana” as being about “the most famous nightclub in the world.”

Organizers had hoped to resume the concert around 10 p.m., but as the storm began to intensify, organizers eventually capitulated to the elements. At 10:30 p.m., after he’d spoken with an understandably wary Patti Smith about the chances of resumption, Anderson Cooper of CNN, which had broadcast the show, announced that the night was officially over.

“Nature rules,” Smith told Cooper shortly before the show’s cancellation. “We have abused nature to the point where she is chaotic and unpredictable.”