Close to 11 p.m. Tuesday night at Louisville, Kentucky’s Headliners Music Hall, My Morning Jacket frontman Jim James looked over the 600-capacity hometown crowd of friends, family and fan-club members who scored tickets to the surprise show. “It’s such a trip to play here,” he said. “We last played here in 2003. A little trip down memory lane.”

The band launched into the heavy blues riff of “Honest Man” from 2001’s At Dawn. Midway through the song, under green stage lights and in a haze of smoke, James let out ringing blasts of fuzz from his Gibson hollow-body as he faced bassist Tom “Two-Tone” Blankenship – the band’s only other member still in the lineup from those days – with the two grinning in a fit of nostalgia. “Man, they never play this,” said a friend of the band who flew in from Los Angeles for the shows.

The two shows — the band also performed at the club Monday night — were warm-ups for My Morning Jacket’s upcoming tour supporting their new album The Waterfall, some of which was recorded two minutes down the road at La La Land studios. The band seemed right at home; on Monday night, James estimated he’s seen roughly “150 million” shows at Headliners and recalled getting kicked out of the venue on Wilco’s Being There tour. “I was super fucked up,” he admitted. “It was probably my fault.”

Venue security hasn’t loosened up since then; signs hung throughout the venue warning fans that no cell phone use was allowed in the building, and security sternly chastised anyone who did so much as text.

The secret shows were the group’s first U.S. shows after the longest break in the band’s history. They last played together at their One Big Holiday festival at Mexican in February and before that at the same festival one year earlier. James used his downtime to tour his solo album and took part in the New Basement Tapes project. “It felt like having sex for the first time,” keyboardist Bo Koster tells Rolling Stone about playing live again over gumbo soup as the other members laughed. “Like, ‘Am I doing this right? Am I pretty?'” 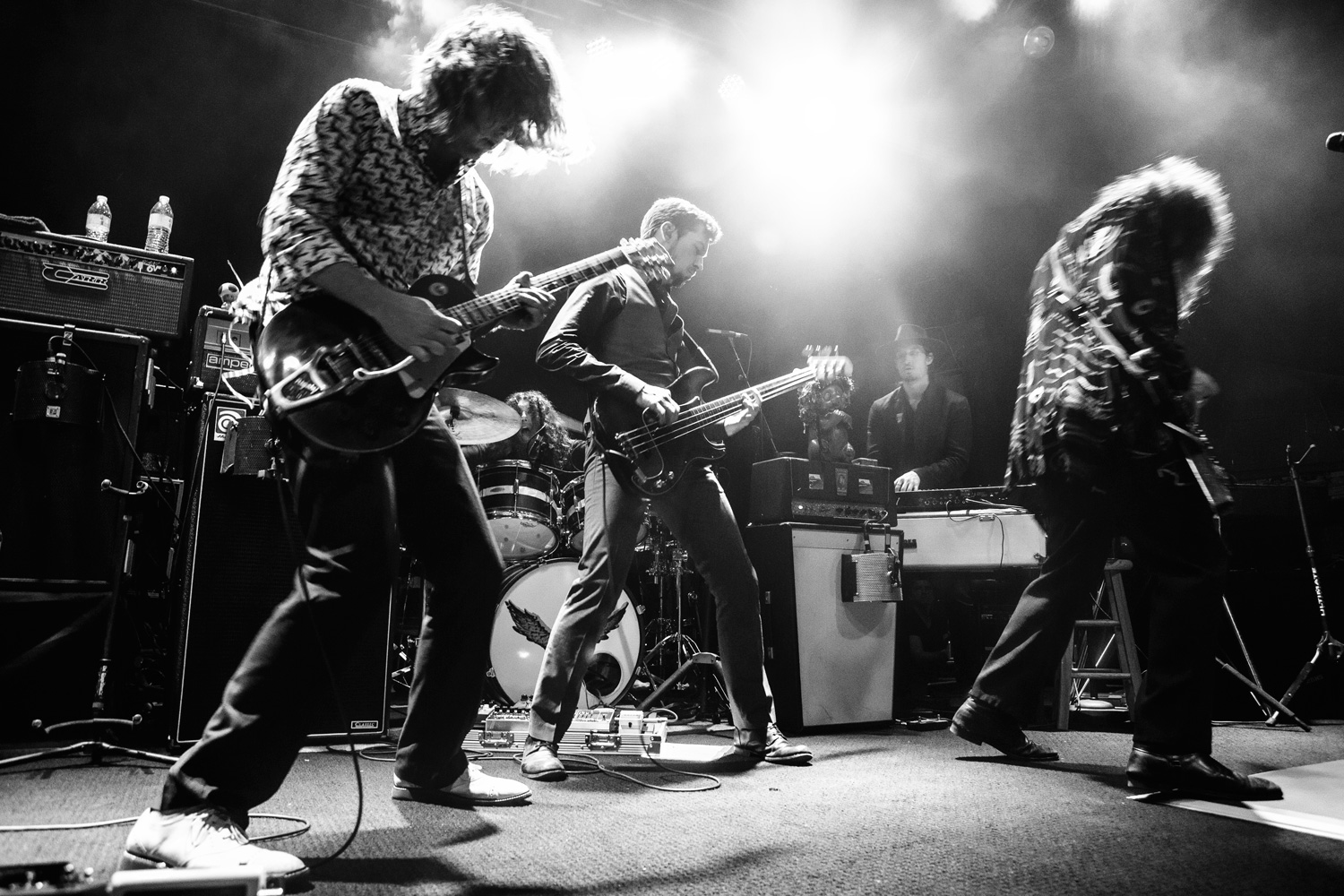 The Waterfall is the band’s most adventurous album in years. It may be a polarizing one for fans, with fewer of the big anthems of recent years and more ethereal, drawn-out sounds. “We decided to just go in with this whole pile of parts and the no-stone-unturned mantra was put in place and we pieced things together,” says drummer Patrick Hallahan.

The band’s live debut of the album only hinted at the future live potential of the songs. Both nights, the crowd immediately latched onto second track “Compound Fracture,” a swaggering soul stomper with a hint of T. Rex, singing along with guitarist Carl Broemel’s “woo-hoo” backup vocals. And they seemed entranced by abstract, winding numbers like the psychedelic, tribal “Like a River,” and “Spring (Among the Living),” with James losing himself in the jagged rhythmic jolts and Koster’s orchestral keyboard touches.

James emotionally delivered the acoustic breakup ballad “Get the Point” over Broemel’s steel guitar. For the first night’s set of rarities, James returned with an acoustic guitar, reaching into his falsetto for “Bermuda Highway,” before Broemel’s underrated solo cut “Carried Away” injected the set with Crazy Horse energy. The band wrapped with “Down on the Bottom” from the New Basement Tapes.

The band seemed even more comfortable the second night. The smoky, melancholy album finale “Only Memories Remain” felt more fluid – the band dismissed their previous night’s performance of the song as “awkward” – with  James and Broemel nailing the twin guitar harmony and James improvising a lead guitar melody the band latched on to.

James seemed more dedicated to the album’s biggest hooks, “Believe” and “Big Decisions,” with the singer pleading during the latter’s chorus, “What do you want me to do? Make all the big decisions for you? Because I can’t.” The encore included “Wonderful” and some kind words from James on the growth he’s seen in Louisville lately. “It feels so good to be here. I’m so proud,” he said.

Over lunch before the second show, Hallahan said that at this point, the band has achieved more than he could have ever imagined.”We don’t have a lot of presence outside of small radio play and record sales, so the majority of it is people coming to see a live show; actual human interaction,” he said. “I think we’re a really fortunate band that we can throw a festival in Mexico and have our die-hard fans come down. There was a point where we couldn’t do that. You can feel that energy at the shows now. They want to be there. They aren’t there to figure you out. They’re there because they’re taking off work. That takes a lot of money and time out of people’s lives.”