“You like our fucking pumpkins?” Glenn Danzig asks a deafening Denver crowd, gesturing at the 15-foot jack-o’-lanterns glowering at the audience on either side of Riot Fest’s “Riot Stage.” “They’re pretty fucking cool.”

The band is midway into the first Misfits concert in 33 years to feature its founding fiend behind the mic, and the horror-punk trailblazers have just finished playing their gruesome “Halloween,” with its catalog of “candy apples with razor blades” and “dead cats hanging from poles” – and the 10s of thousands of people watching seem to sing every word. Two coffin-shaped entryways sit at either side of the drum riser, the band’s iconic “Crimson Ghost” skull-man icon seems to adorn every other square foot of stage, and the other “original Misfits” – bassist Jerry Only and guitarist Doyle – are decked out in their Walpurgisnacht best: ghoulish white face paint, black leather and spikes, “devilock” hairdos swaying over their instruments. But for all of Misfits’ signature doom and gloom, everyone onstage looks surprisingly happy.

That’s because the original Misfits’ comeback, the closing event of the Mile High City’s three-day Riot Fest & Rodeo, was a celebration of the group’s nearly 40-year legacy of out-and-out punk subversion, one that’s resounded in the music of Metallica, Guns N’ Roses, AFI and countless other groups. It’s a reunion that never seemed possible, as Danzig and Only have spent the decades since their breakup filing soul-sucking lawsuits against one another and taking bitter snipes at each other in the press after Only and Doyle reactivated the group without Danzig in 1995 (Doyle and Danzig settled their differences around 2004). Yet here they all are, with help from former Slayer drummer Dave Lombardo and second guitarist Acey Slade, who plays in Joan Jett’s Blackhearts, reciting 25 of their so-called “hits from hell” for a little more than 70 minutes and even reminiscing. 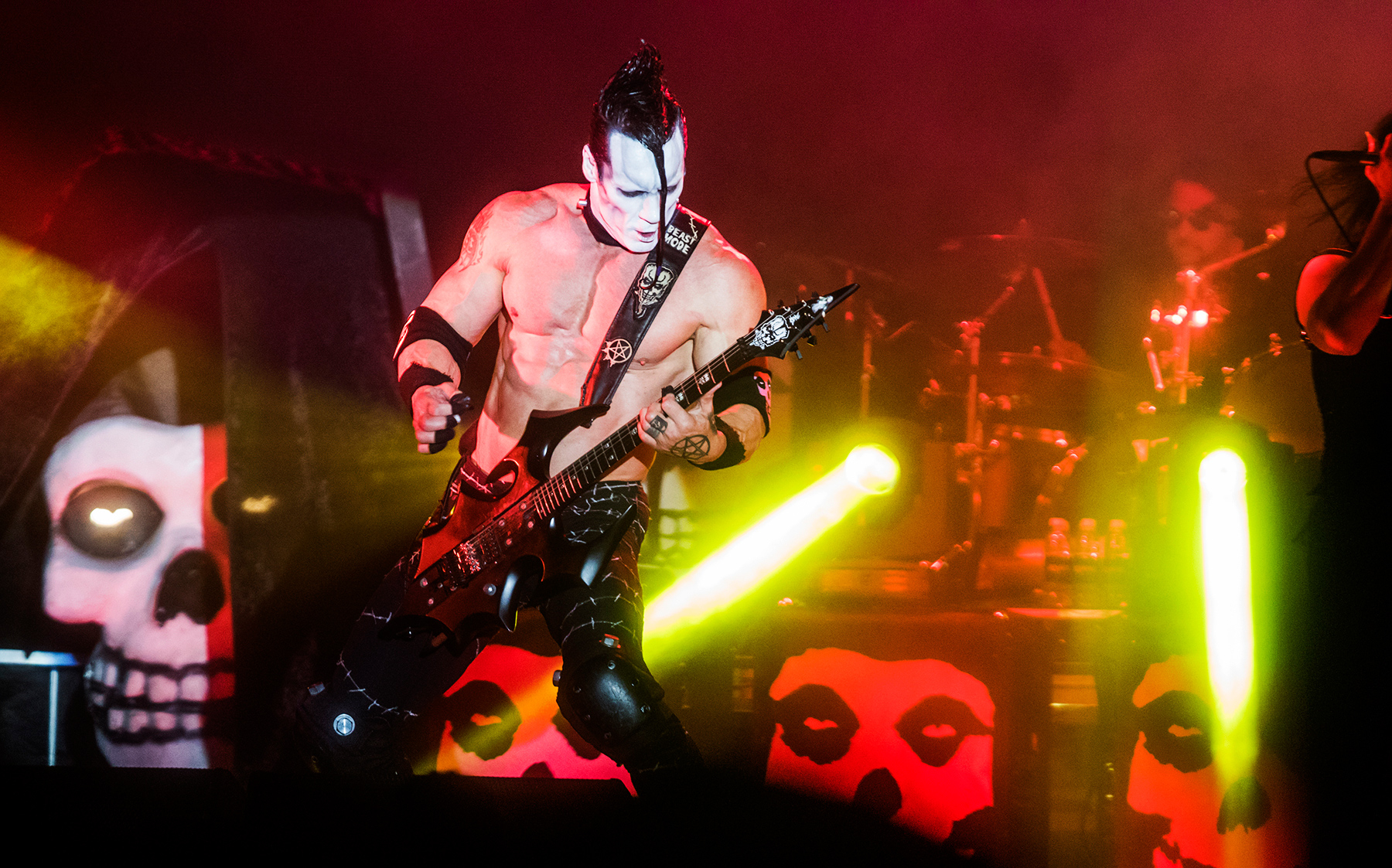 “About 40 years ago, Jerry and I got onstage in New York and we shocked the whole fucking punk scene who didn’t know what the fuck to make of us,” Danzig said at one point. “We didn’t look like anybody. We didn’t sound like anybody. We were angry, pissed-off and we dressed all in fucking black and we were always getting into fights and shitloads of fucking trouble every night. That’s pretty much what punk was back then, getting fucked up and fucking people up. At least in New York City it was.” Then they led a round of their ragged sing-along “Where Eagles Dare” as the audience bellowed its chorus, “I ain’t no goddamn son of a bitch.”

Right from the start, after a curtain fell to reveal the band’s elaborate stage set, the audience began crushing forward. Toward the front of the stage, fans pushed each other like some living organism, with the few that had free hands raising them to fist-bang along with Danzig’s anthemic lyrics. Some had arrived early, before the fest’s gates opened at 11 a.m., wearing their Crimson Ghost T-shirts as they watched bands like Bad Religion and Converge, the latter of which praised Misfits when singer Jacob Bannon said they “made all the difference for me when I was a kid.” By 2 p.m., the only Misfits shirts available at the merch table were sizes medium and small. The iconic punk band’s set was clearly the most anticipated performance of the weekend.

Only told Rolling Stone earlier this year that he wanted Danzig to pick the set list, and the singer’s song selection did not disappoint. It spanned his entire time with the group from 1977 to 1983, from their mordant first single “She” to the skull-rattling ragers of swan song Earth A.D. They charged through all the songs that became classics thanks to Metallica (“Last Caress,” “Green Hell,” “Die, Die My Darling”), with Danzig telling the crowd, “You all know this number,” and they included songs that have become de facto anthems for the band, including “Horror Business,” “We Are 138” and “Skulls.” And they played a handful of tunes Danzig has not sung onstage since 1983, like “Hybrid Moments,” “Teenagers From Mars,” “Where Eagles Dare” and his Misfits-era solo debut “Who Killed Marilyn?”

The only staples ostensibly missing were “Attitude,” which Guns N’ Roses has been playing on their current tour, and their balmy “Static Age.” But with seemingly everyone in the audience singing along, it was about as feel-good, lovey-dovey an experience as the band is capable of. 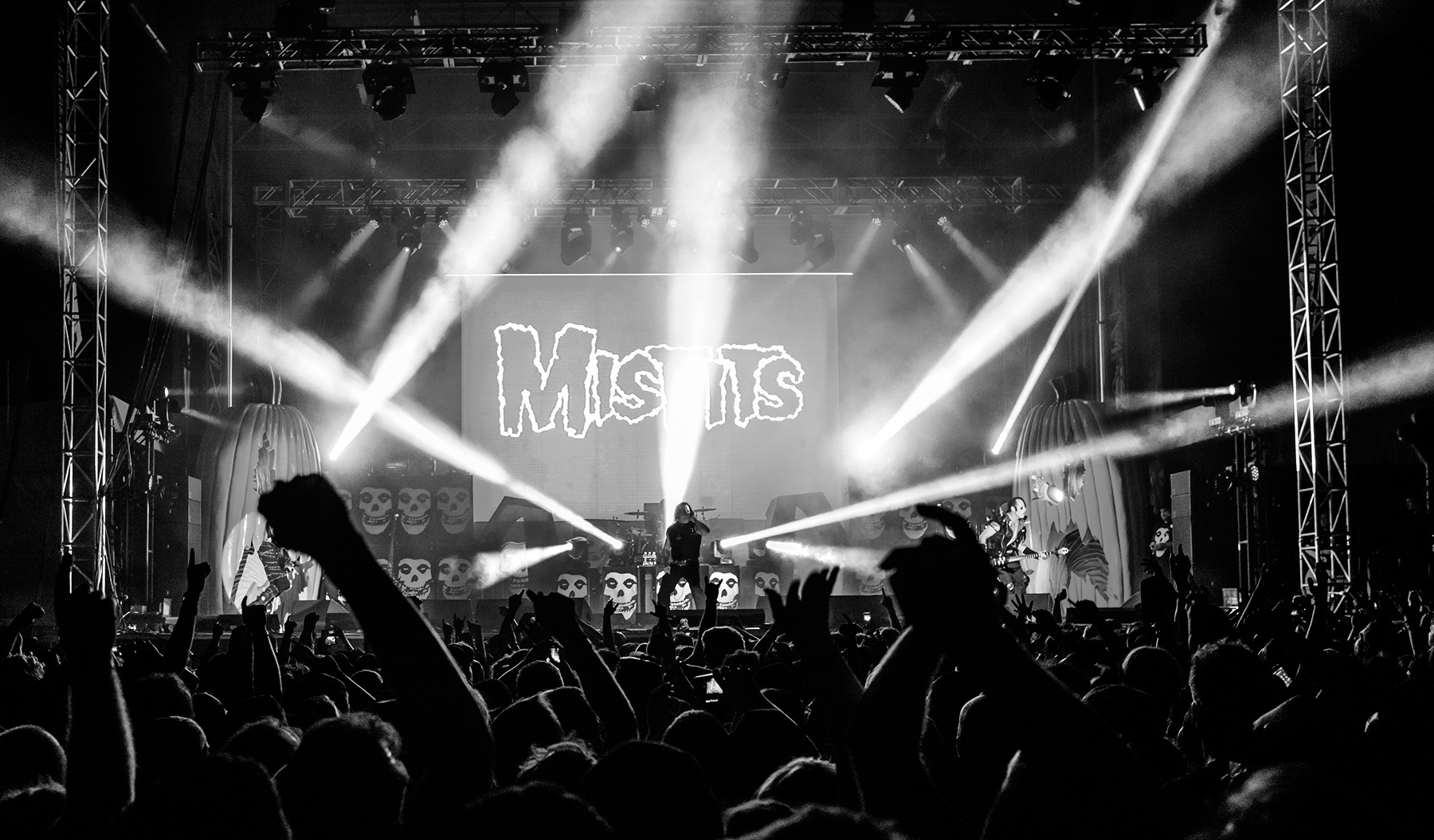 Earlier this year, Danzig told Rolling Stone about what a debacle his final Misfits show was. “Our drummer got really drunk and couldn’t play so we got Todd [Swalla] from the Necros to fill in,” he said, laughing. “It was a crazy night. It almost turned into a disaster.” Video of that show, which took place in Detroit a couple of days before Halloween 1983 shows the band blasting through its repertoire with false starts. “We were playing at the speed of light,” Only said of the concert.

Tonight more than made up for that last gig. Lombardo added some rapid-fire double-bass to the thrashier songs, Only and Doyle playfully sneered when they weren’t smiling, and Danzig headbanged and flexed like he’d never left. They were in top form, as the Riot Fest crowd in Chicago – the original Misfits’ only other reunion date on the calendar – will see in a couple weeks, and that is a fact not lost on Danzig who introduced the group’s encore set by saying, “We hope you had a fucking historic evening tonight.” But the fact of the matter is, anybody who was present won’t soon forget the energy Misfits had or their howling jack-o’-lanterns.

“Bullet”
“She”
“Night of the Living Dead”

The Misfits confirmed that former Slayer drummer Dave Lombardo will be their man behind the kit at their Riot Fest appearances.