Over the course of two-plus hours at her Dead Petz tour opener, Miley Cyrus put on one of the most fantastically strange shows in recent memory, notable for the blunt muchness of every possible aspect. Backed by an assortment of wildly costumed friends and in collaboration with the Flaming Lips, Cyrus dumped her id and, song by song, dismantled the public pop construction of our (mis)understading of who she is. The spectacle was by turns glorious, turgid, porny and willfully amateur — the latter aspect being the real source of surprise and entertainment, and a seeming relief for Cyrus herself.

Everything Cyrus has done in the past several years has put greater distance between Miley the Disney product and the oft-controversial pop figure she has become. Onstage at the Riveria Theatre in Chicago on Thursday night, playing to a heavily costumed (think rave plushies) crowd of 2000, she seemed relaxed and joyous, as if had finally arrived at what she has been working towards this whole time. Lips bandleader Wayne Coyne played sideman and chuckling accomplice to Cyrus, though for a few-song stretch he returned to his seemingly perdurable role of Giant Balloon Shepherd, as the successive stadium-grade drops of inflatables crowded the room. The band and Cyrus were loose but faithful to Dead Petz, making their way through almost the entire 23-track album before closing with “We Can’t Stop.” 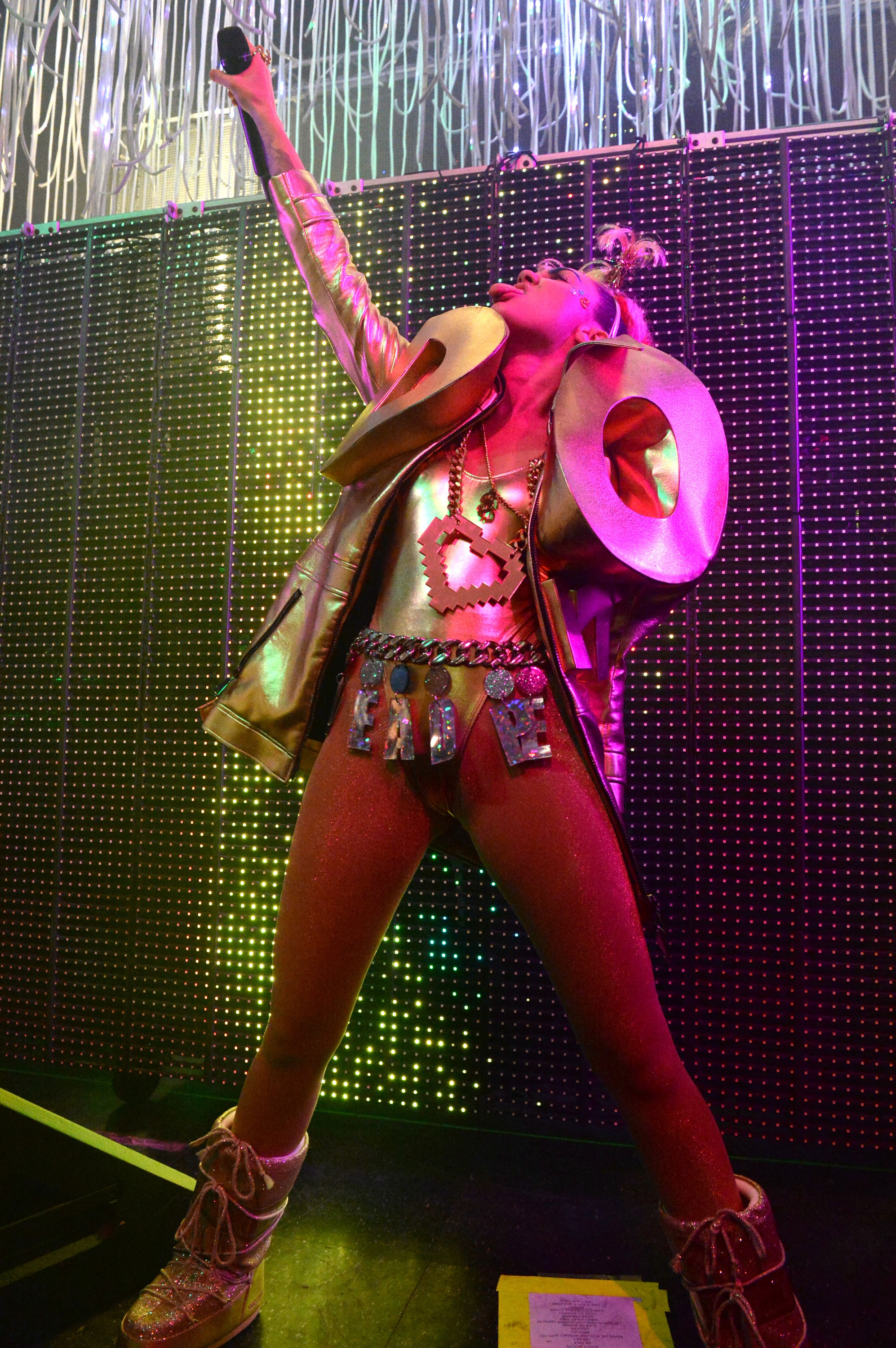 Opening with “Dooo It,” clad in a golden, thonged onesie, and matching suit coat with the letters “D” and “O” in lieu of lapels, and moon boots, Cyrus stomped and strutted, free of choreography. Flanking her on the side of the stage was her trusty dancer-cohort Amazon Ashley, in a rainbow Afro wig, a giant dollar sign hanging between her breasts, which were covered only with money-bag pasties. When Cyrus mimed suckling on them, it seemed like perhaps this roll-out of Dead Petz stood to become a rehash of familiar tropes and trespasses, but by the end of her epic set, it seemed unlikely we might ever get that old stadium-sized Miley and her tongue back.

Her first costume change signaled that this was not merely Miley shrinking to fit a small venue. She came on and sang “1 Sun” dressed as a sun, looking so ragtag that Coyne was laughing, as Cyrus’ paper rays crumpled as she moved. Occasionally, all the camp, props, balloons and confetti threatened to — literally and metaphorically — cloud the centerpiece, which is Cyrus’ voice, as huge and unadorned as it’s ever been. In those moments of balloon fatigue and “this song’s about pussy!” declarations (Cyrus’ own), all of this felt more ironic than gleefully goofy, some caustic lark or high-budget fuck you, but invariably the performers wheeled the event back to being a proper show filled with peace and hedonism. The psychedelic vamping of Coyne and Co. worked well in the same spots it does on the record (“Karen,” and “Lighter,” particularly), though, as on Dead Petz, at times the accompaniment ran together in a jammy soup.

The show’s playfulness served the irreverent material of Dead Petz well (“Bang Me Box,””Space Dude”). During “Fweaky,” Cyrus appeared in a fat-baby suit, then sipped from, sucked off and jerked off a jeweled baby bottle, stripped, did some pole-dancing once she was free of her diaper, and finally topped the routine off by crawling to the lip of the stage where fans stuffed bills in her mouth. The sheer what-the-fuckness of watching one of the biggest pop stars in the world go a few yams shy of full-on Karen Finley felt like the birth of the authentic, artistic moment of Mileydom. Can you imagine Bieber, Taylor, or, hell, Lana belting with a mouthful of sweaty American currency? 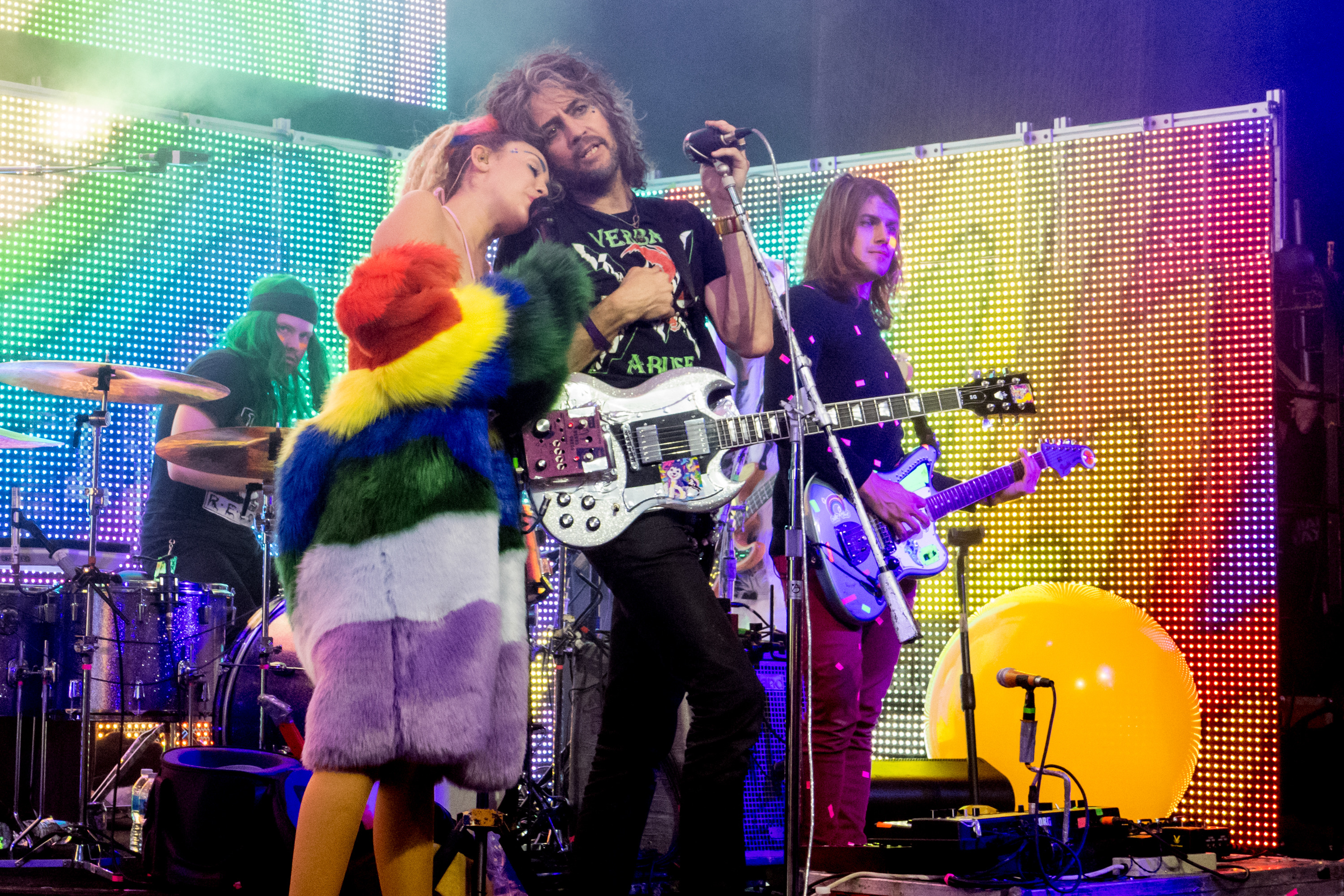 Still, as much fun as it is to see her do her bad-bitch routine dressed as a stick of butter, or prance as an apocalyptic ponygirl in a chrome harness sporting a massive, perhaps 18-inch corkscrew dildo — the moments of transcendence were when Cyrus was on her own, less concerned about us: at the piano, howling a eulogy for her departed fish; doubled over, screaming “What does it mean?!” at the floor; or the moment when she ripped off her fake dreads in fuck-this-shit earnestness. It suddenly felt like this is the Miley we’ve been waiting for — or rather, the Miley we really deserve.