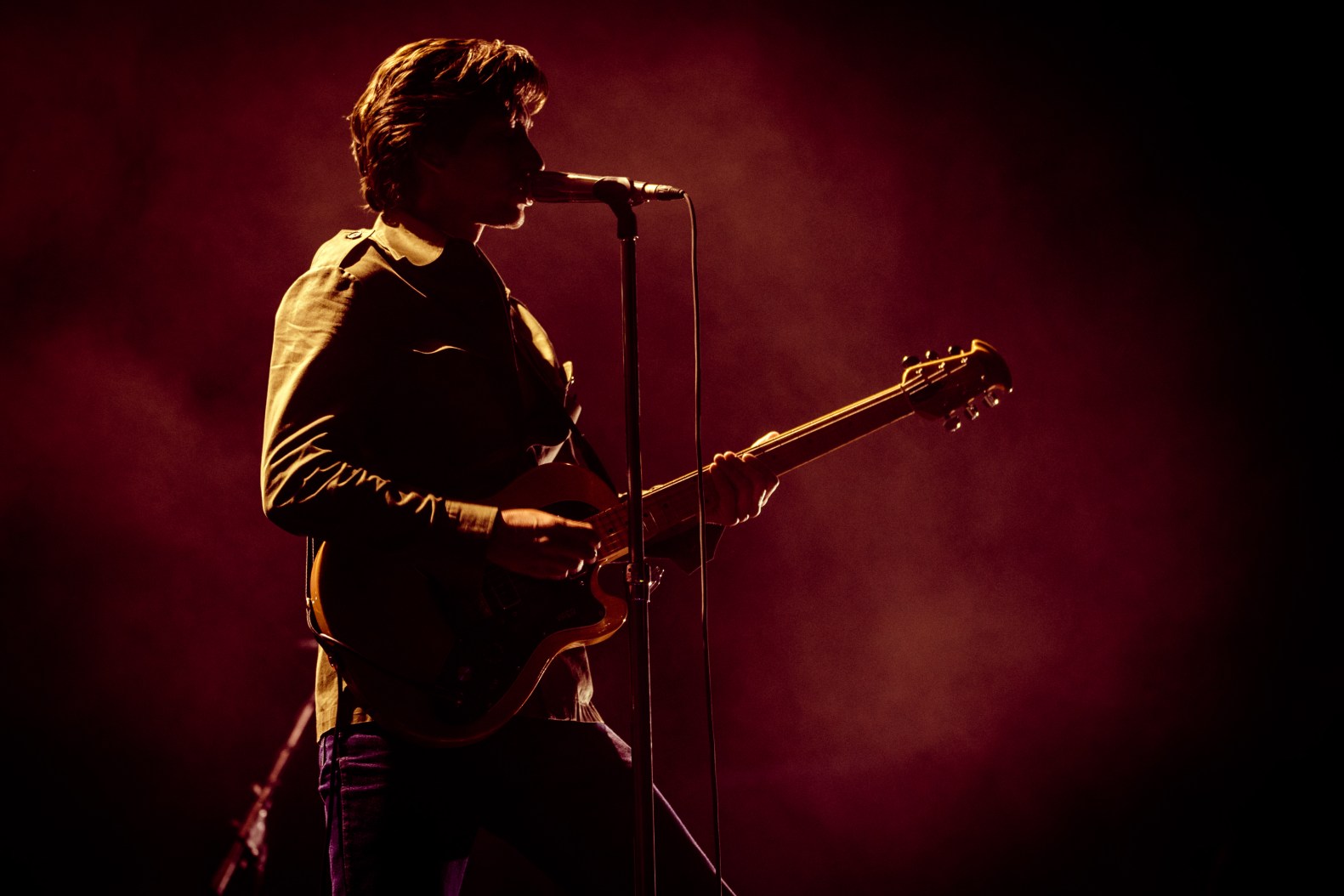 Life Is Beautiful kicked off on Friday in the heart of Las Vegas, with thousands of festival-goers scurrying to the Sin City for the buzzy three-day show that turns Vegas’s eclectic downtown into a psychedelic desert amusement park.

The Life Is Beautiful footprint takes up 18 blocks of downtown Las Vegas, an area of town once known for cheap drinks, seedy motels and a string of pawn shops. However, this slice of Vegas has turned into a hipster haven known for funky art installations, home-grown farm-to-table restaurants and, cheap drinks. For three days every year, that area transforms into the home for 150,000 festival fans, as they traverse between seven stages, comedy clubs, live art paintings, silent discos, pop-up bars and beer gardens, interactive 3D murals, an open-air market, and high-end culinary installments. All of this, of course, as fans basked in the 90-degree heat.

Arctic Monkeys, Charli XCX, Wet Leg and Shaggy were just a few of the highlights of day one, but check back on our coverage throughout the weekend, as superstars including Jack Harlow, Lorde, The Gorillaz, Beach House and Calvin Harris will all be playing the fest.

Note: Rolling Stone purchased a majority stake in Life Is Beautiful in February 2022.

Walking up to the stage to some heavy jazz, the Arctic Monkeys emerged for their Life Is Beautiful headline set – the band’s first U.S. show since 2018 – only to start with the heaviest hitter possible, perhaps the best known riff of the past decade in “Do I Wanna Know?”

The band would spend the following hour and a half strutting their way through their signature swaggered, fuzz-guitar-laced catalog, from AM-era classics like “Why Do You Only Call Me When You’re High?” and “Arabella”  to their newer tracks like “Tranquility Base Hotel & Casino” and “I Ain’t Quite Where I Think I Am.” Alex Turner and company, taking the casual rockstar look in button down shirts and jeans, didn’t stop to interact with the crowd much beyond the occasional check in, instead powering from track to head-banging track one after the next. Other highlights included Suck It and See standout “That’s Where you’re Wrong” along with “The View From the Afternoon.”

After wrapping with “505,” they came back with a rip-roaring encore of “One Point Perspective,” their first hit “I Bet You Look Good on the Dance Floor,” and their classic “R U Mine,” bad-ass riff and all.

The Church of Wonderland

Arguably the biggest EDM act of Day 1, Alison Wonderland’s set was heavily produced, as most EDM acts are. Although she was going up against the headliner of the night, Arctic Monkeys, Wonderland didn’t lack support — fans overflowed out of her covered stage area and stayed until she finished at 1 a.m. “I sure am feeling something right now,” the Australian producer said before welcoming all new fans to the “Church of Wonderland.” Lasers, lights and pyro lit up the stage and tented area as she played her remix of Dua Lipa’s “New Rules.” Via those same lights and graphics, the mood turned more sinister for 2015’s “U Don’t Know,” which was written about depression. “Fuck depression,” she flatly said. She had nothing to be sad about with her set and the horde or adoring fans.

Charli XCX closed the Huntridge Stage with an electric set. Flanked by Grecian pillars and dramatic steps, the Brit sang “Lightning” to begin her Life Is Beautiful experience. The stage seemed appropriate for XCX, who saw incredible crowd interaction with “I Love It,” her song with Icona Pop. Both she and the crowd sang with vitality. One of the few acts who had backup dancers, XCX matched their moves. XCX, making sure her crowd was feeling showed off a deep catalog throughout her set, rolling through eagworms like “Boys,” and “Unlock it,” and running through her latest single “Hot in It,” a collaboration with Tiësto. Even with a run of hits as impressive as hers, XCX was at her most iconic with “Vroom Vroom.”

The Elephant in the Room

Cage the Elephant frontman Matt Shultz wore many hats during the band’s performance, quite literally. Switching between a bucket hat, glittery cowboy hat and baseball cap, by the end of the show, he settled for a crown of flowers, looking like a rock god as fans hoisted Schultz up by his shoeless feet.

It feels strange to call Cage the Elephant the veterans of their genre, but 15 years into their craft, they had among the tightest sets of the evening, highlighted by hits like “Trouble” and “Ain’t No Rest For The Wicked” “Come A Little Closer” and “Cigarette Daydreams” along with fan favorites like “Telescope” and “Spiderhead” from their 2013 album Melophobia. Shultz was as frantically high energy as ever, dancing across the whole stage, changing clothes, stripping and stage-diving his way through Cage’s entire set.

T-Pain reminded everyone just how many songs he has in his repertoire, and it is impressive. The rapper began his set by singing samples of massive hits he’s been featured in, including Wiz Khalifa’s “Black and Yellow,” DJ Unc’s “2 Step Remix,” Lil Wayne’s “This Way That Way,” Chris Brown’s “Kiss Kiss” and Kanye West’s “Good Life,” among many others. Pain, a late replacement for Migos, was all business, ripping through this plethora of hits, too.

During his hour-long set, Pain used a large block of his time to pay homage to his time as “The Monster” on “The Masked Singer,” even performing several of the songs that earned him the win on the show, including Queen’s “Don’t Stop Me Now,” Lenny Kravitz’s “American Woman,” Montell Jordan’s “This Is How We Do It,” and Sam Smith’s melodic “Stay With Me.” Auto-Tune, be damned. “Thank y’all for still fucking with T-Pain in 2022,” he said before ending. “I’ve been on the edge a lot of times and I appreciate you all showing up. I do not take this shit for granted.”

Shaking It With Shaggy

In what became a theme through the day, Shaggy asked the crowd for marijuana and then played the “Cops” theme song. Nodding to another smash that would be performed later, he joked, “If you get caught with that shit you tell them it wasn’t me.” Shaggy later toed the line of funny and crude while putting a microphone in his pants and speaking of pregnancy. The bit worked, but probably went on too long. Still, the reggae-tinged rapper delighted the masses with “Angel,”  and even played Frank Sinatra songs from his new album, “Com Fly Wid Mi,” which was produced by Sting. “These aren’t just any Sinatra songs, but reggae versions,” he said. He then went back to the fan favorites, including “Luv Me, Luv Me” and “It Wasn’t Me,” which saw a heavy dose of pelvic thrusts. In really bringing home the meaning of his final song, Shaggy flashed a picture of Bill Clinton and Monica Lewinsky. Of course, he replied, “It wasn’t me.”

Getting a (Wet) Leg Up

British indie rock duo Wet Leg exploded onto the scene this year off the back of their delightfully cheeky eponymous first album and two lauded singles “Chaise Longue” and “Wet Dream,” and their Life is Beautiful debut was just as fun. Irreverent, high-energy and funny, Wet Leg (who inexplicably walked up to the stage as their set began to the sounds of the Shire from Lord of the Rings) wooed the crowd with screams, groovy guitars and an impeccable ability to weave post-punk sounds with the perfect level of raunch.

“What a nice surprise to see so many people here,” lead singer Rhian Teasdale says politely to the cheers of the crowd eagerly waiting for the next song. Getting just under an hour on the Huntridge Stage, Wet Leg made the most of every minute. Teasdale evokes smirks when singing “Wet Dream,” and she breaks into some sort of pseudo yodel on “Supermarket.” “Obvious” was one of the set’s standouts, between the slow burn toward the track’s crescendo and the song showcasing the the band’s willingness to experiment with stranger sounds like the theremin (or some type of theremin-sounding synthesizer.)

Finishing with viral hit “Chaise Longue,” the crowd erupted as Teasdale sang of “getting the big D” in school and evoked Mean Girls asking if “your muffin was buttered,” and “would you like us to assign someone to butter your muffin?”

Oliver Tree Returns To His Roots

The crowd for Oliver Tree was significantly younger than that for other acts, likely thanks to TikTok. The singer/social media personality arrived on stage on a scooter and launched into “Forget it.” “We didn’t think anyone would show up,” he said. Tree, who recalled living in Vegas until he was 8 years old, feigned ending his set after two songs, and continually asked if the crowd wanted “one more song” after nearly every song. While donning his customary purple and red jacket and blonde wig, Tree said he was “heating up like a pork chop in the oven.” He added, “I’m taking this stupid fucking outfit off.” Tree then doffed the jacket and baggy pants to reveal a white and turquoise sweatsuit, which was likely every bit as warm.

He of course sang “Life Goes On,” which gained famed on TikTok in 2021. “If you don’t know what TikTok is, it’s an app made for people 1-to-4 years old,” he joked. Continuing his tongue-in-cheek approach, he later dressed in country western attire and sang “Cowboys Don’t Cry” on a life-sized plastic cow, and he also played a guitar larger than him for “Miracle Man.” He called it the “world’s biggest guitar.” The Guinness Book of World Records was not on hand to verify.

As the sun began to setting behind the highrise condos and hotels of Downtown Las Vegas, Coin entered the chat. The Nashville-based four-piece brought its style of pop-rock-funk, which was especially pronounced with the ear-worms “Cutie” and “Talk Too Much.” Halfway through the set, video screens showed footage from a camera-mounted drone, which was flying over the crowds. “Welcome to Dystopia,” lead singer Chase Lawrence said of the voyeuristic footage, which played throughout the song “Brad Pitt.” Clearly embracing the production, lyrics and song titles often flashed on screens bending the group. “You ever love someone so much it hurts?,” it read at one point. Lawrence wasn’t totally on board for all the technology, though, joking that a livestream on Twitch was “terrifying unnatural.” Speaking of terrifying, just before the end of the set, Lawrence climbed up the stage scaffolding untethered for a better view of the crowd. Dare we say Coin’s set was… money.

Yes, Blu DeTiger is her birth-given name, remember it. Gen Z’s queen of the bass delivered funky bass lines and dreamy vocals on performances of original tracks like “Cotton Candy Lemonade” and “Figure it Out,” and further won the crowd with a fun mashup of the Gorillaz’ “Feel Good Inc.,” OutKast’s “Ms. Jackson” and MIA’s “Paper Planes.” DeTiger finished with cheeky jam “Vintage” teasing about how she needs “a vintage boy for her outfit.” DeTiger showcased the same prowess on bass that’s gotten her notoriety on TikTok and won her opportunities to work with Olivia Rodrigo and Chromeo.