Nearly a decade and a half ago, California impresario Anthony Tiffith signed an unknown 15-year-old musician named Kendrick Lamar to his fledgling label, Top Dawg Entertainment. Kendrick has gone on to win widespread acclaim as the greatest rapper in a generation, along with platinum plaques, Grammys and a Pulitzer.

In the past year, TDE has produced a second breakout star in SZA, whose Ctrl was one of 2017’s best full-length studio debuts. The Championship Tour, the roster-spanning label showcase that began last night, is a victory lap for all that success — and a way for Kendrick’s considerable star power to boost the rest of the TDE lineup and the Top Dawg brand itself, as it expands into sports management, film, and fashion.

As audience members filed into Vancouver’s Rogers Arena for the tour kickoff, they were invited to take in the label’s accomplishments. Banners framed the stage, detailing TDE artists’ major releases and awards, with Lamar’s recent Pulitzer for DAMN top and center. Trading-card-style illustrations of TDE’s artists flashed on the lower of two stage-wide LED screens, and a series of jock jams — “Eye of the Tiger,” “Thunderstruck” and, pointedly, “We Are the Champions” — blared between sets.

Lamar loomed over the proceedings, even before he took the stage. Short early sets from R&B crooner SiR and Watts rapper Jay Rock were tamely received, as was a one-song appearance from Ab-Soul, TDE’s least conventional rapper. Several of the songs in these sets featured verses from Lamar, like Jay Rock’s 2015 track “Vice City,” but recordings of his voice stood in for the real thing, all the better to build anticipation. 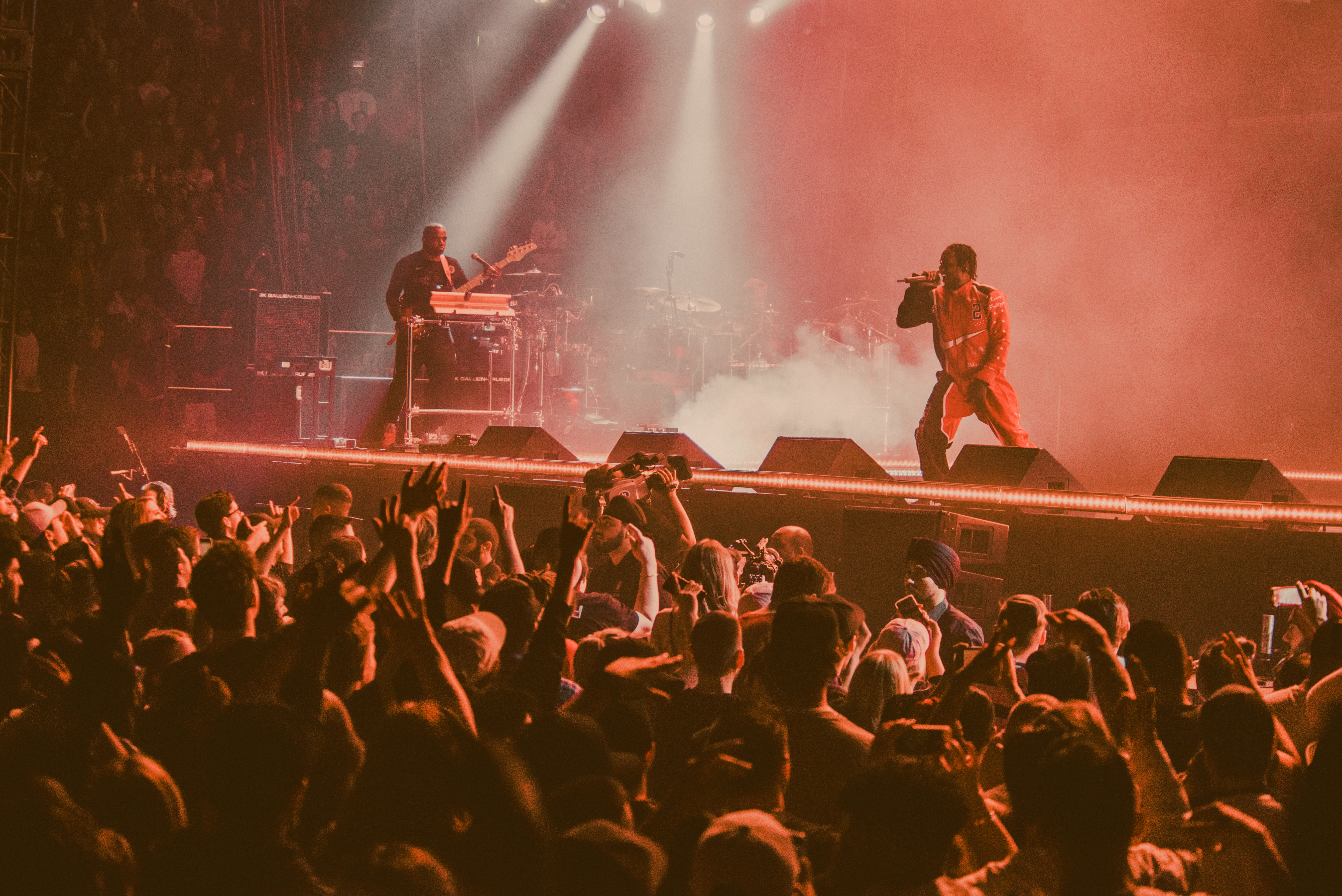 By the time Lamar did take the stage, there was a palpable buzz in the arena, which had been packed since the music began nearly two and a half hours earlier. Starting with DAMN. highlight “DNA,” he packed 16 songs into a little more than an hour.

Material from his 2012 breakthrough LP, good kid, m.A.A.d city, tended to prompt the loudest response, and Lamar knew it. “I’m sure we got a lot of day-one fans in here tonight — we gonna make sure the day ones eat,” he said before performing “Swimming Pools” and “Backstreet Freestyle,” two of good kid’s most beloved tracks.

As he’s done on his recent solo tours, Lamar used the four-piece live backing group to his advantage. The rock-inspired setup (think dramatic drum fills and numerous guitar solos) fed off his heightened vocal energy, lending a different feel to classics like “Money Trees” and “Alright” — the latter one of only two cuts he performed from 2015’s To Pimp a Butterfly.

Lamar closed the show with his 2017 Number One hit “Humble,” and, as is known to happen, the crowd rapped along a capella for a full minute. Eighteen thousand people singing “sit down, be humble” in unison is a spectacle, to be sure, but it also speaks to the connection fans feel to his music.

Before leaving the stage, Kendrick ran it back, playing the whole song again, this time leaving the beat playing. It was a savvy move from a performer who was in complete control all night. 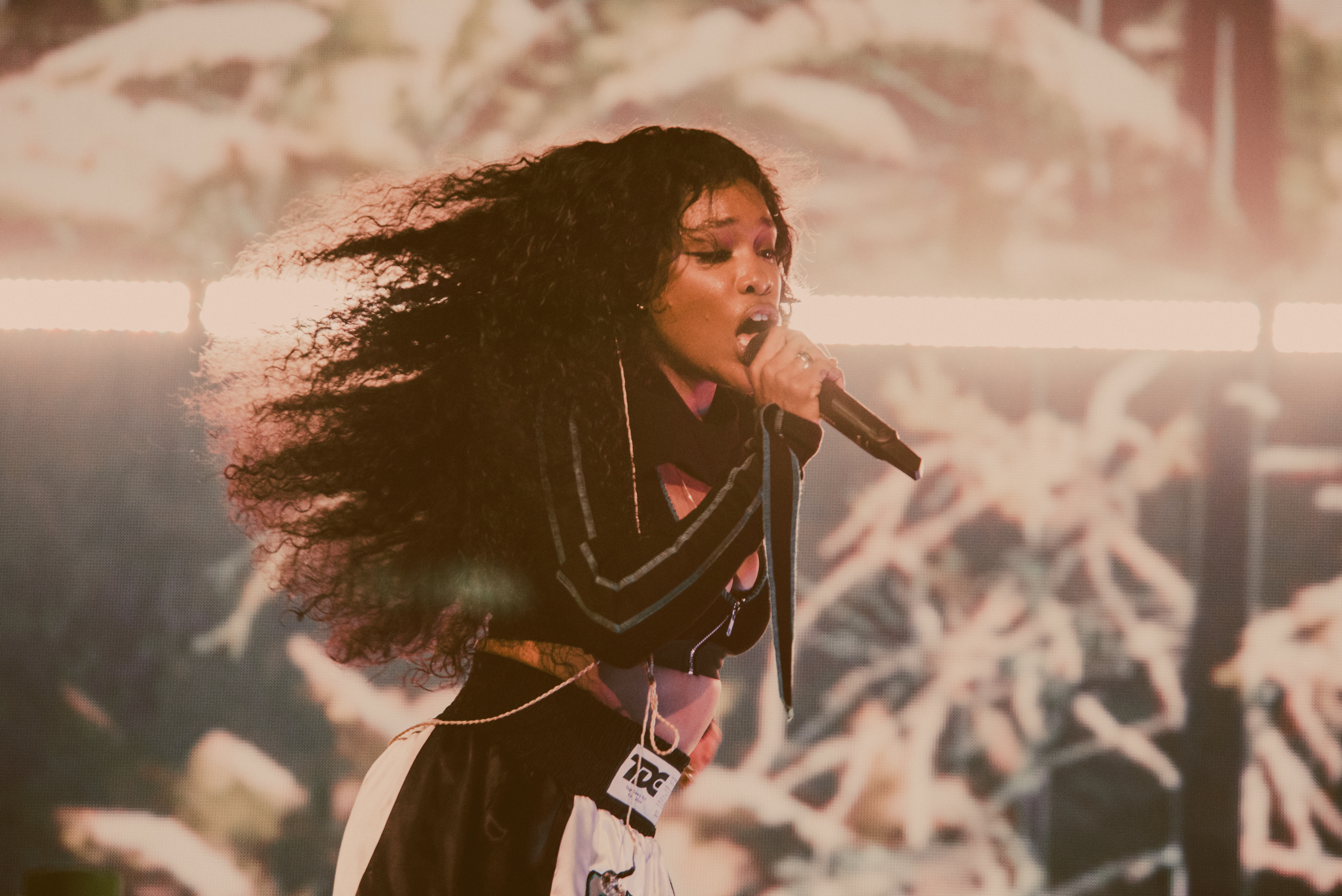 Playing immediately before Lamar, SZA was just as engaging while playing a style of lush, laid-back R&B that doesn’t lend itself as naturally to arena-sized spaces. She’s a magnetic performer, weaving biographical anecdotes with songs about sexual politics.

“Why you bother me when you know you don’t want me?” she sang during a buoyant rendition of “Love Galore,” her standout single with Travis Scott. Up to this point, Kendrick has been Top Dawg’s past, present and future, but SZA is rapidly joining him as a second flagship artist.