Fleetwood Mac has been inspirational and divisive for decades, as new generations of artists are drawn to their songs of doubt and longing, of brooding rhythms and perfect folk-rock hooks. At a tribute concert Tuesday night at the Fonda Theatre in Hollywood, the band’s hitmaking years were celebrated by a long roster of talent, especially heard in the voices of the Kills’ Alison Mosshart, Courtney Love, Joanna Newsom and a wild-eyed Juliette Lewis.

“We have a lot of ladies joining us tonight and they are bringing it,” declared Austin Scaggs, singer-bassist (and Rolling Stone contributor), who led the Cabin Down Below Band through the night’s 28-song set. In recent years, the band has performed similar “Best Fest” tributes on both coasts for Tom Petty, Bob Dylan and George Harrison; Fleetwood Mac Fest benefited musicians-aid organizations Sweet Relief and the Sweet Stuff.

The curtain rose to the tribal beat of “Tusk,” representing Mac at its most adventurous during the era that began when singer-songwriters Lindsey Buckingham and Stevie Nicks joined the band in 1974. The Cabin Down Below Band were soon joined by Carly Rae Jepsen, who sang “Hold Me” with an edge deep inside the song’s easy groove, a tension typical of Fleetwood Mac’s best work. 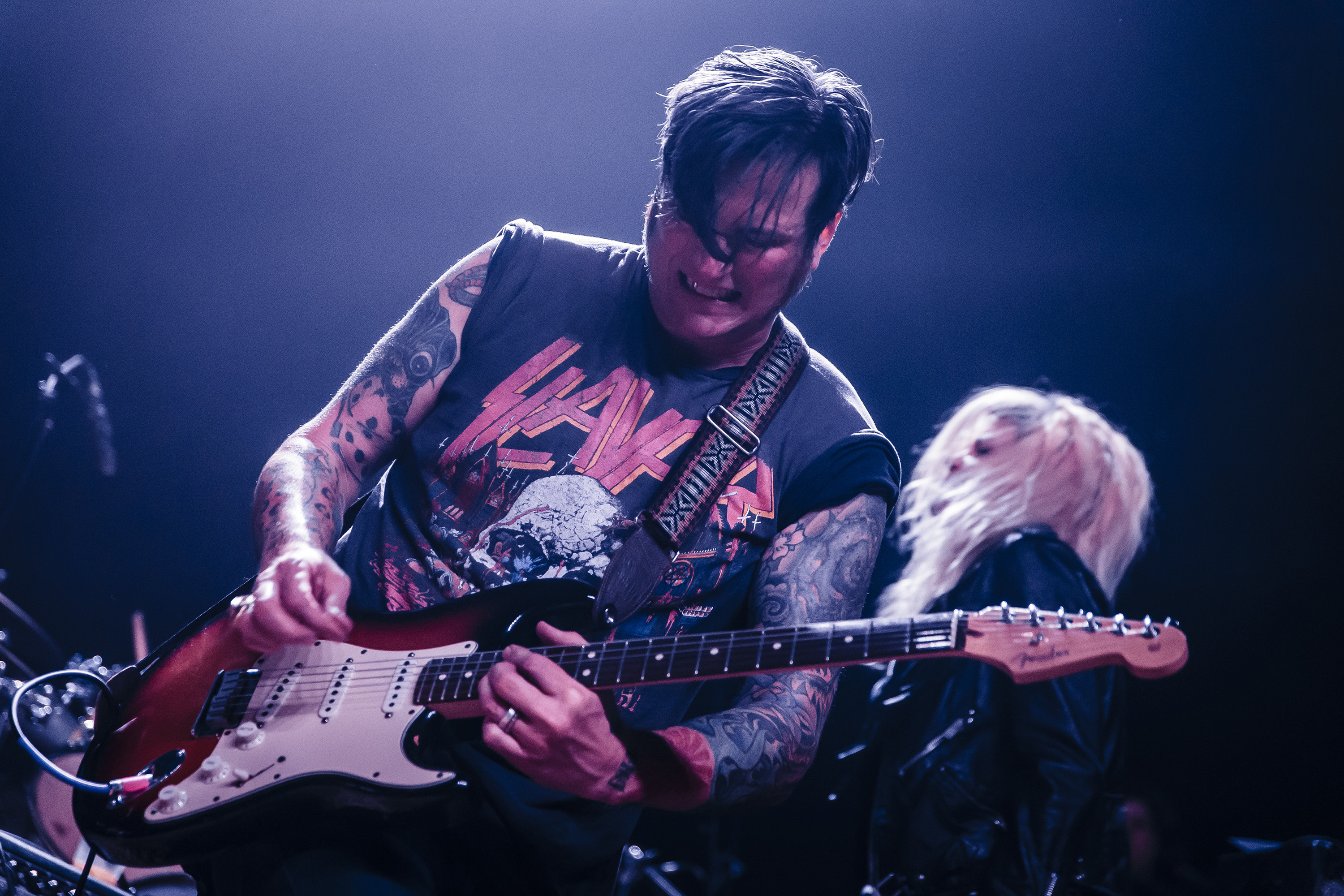 Later, an unannounced Love landed at the microphone in a purple slip for a perfectly ragged “Silver Springs,” a Rumours-era B-side written by Nicks. With Hole, Love recorded a 1997 version of “Gold Dust Woman,” and became friendly with Nicks. For her performance of “Silver Springs,” she was defiant and vulnerable, making the song in her own likeness, as she often does, and curtsied as she left the stage.

Mosshart delivered a haunted, stripped down “Dreams,” with Mark Ronson on guitar. Before performing a biting “You Make Loving Fun,” KT Tunstall wondered about the two wooden balls dangling from Mick Fleetwood’s belt on the cover of Rumours. “What’s with the balls on the Rumours record? It’s all about the balls.”

Juliette Lewis marched out in a tight yellow jumper and shouted, “I brought my love and pain. I hope you don’t mind!” She shouted “Stand Back” in a hard-rock frenzy, whipping her hair side-to-side.

Joanna Newsom sat behind the piano for a delicate and off-center “Beautiful Child,” digging deep into the words of hurt and adoration. But with the piano tucked in a back corner of the stage, she was strangely out of sight for such an anticipated performer.

Comic Will Forte joined Karen Elson for “Stop Draggin’ My Heart Around,” the 1981 hit duet by Nicks and Tom Petty, but Elson did most of the singing while Forte grinned behind the mic stand, occasionally shouting the lines: “I know you really want to tell me goodbye/I know you really want to be your own girl!” Weezer’s Brian Bell added guitar. After Forte exited, Elson remained long enough to sing a dramatic “Rhiannon.”

The roots of Fleetwood Mac as a British blues act, a decade before the arrival of Buckingham and Nicks, were finally represented when guitarist Doyle Bramhall II ripped into a tortured “Black Magic Woman,” as the band roiled heavily behind him.

“Man,” said Scaggs, “Fleetwood Mac has got a lot of good songs.” 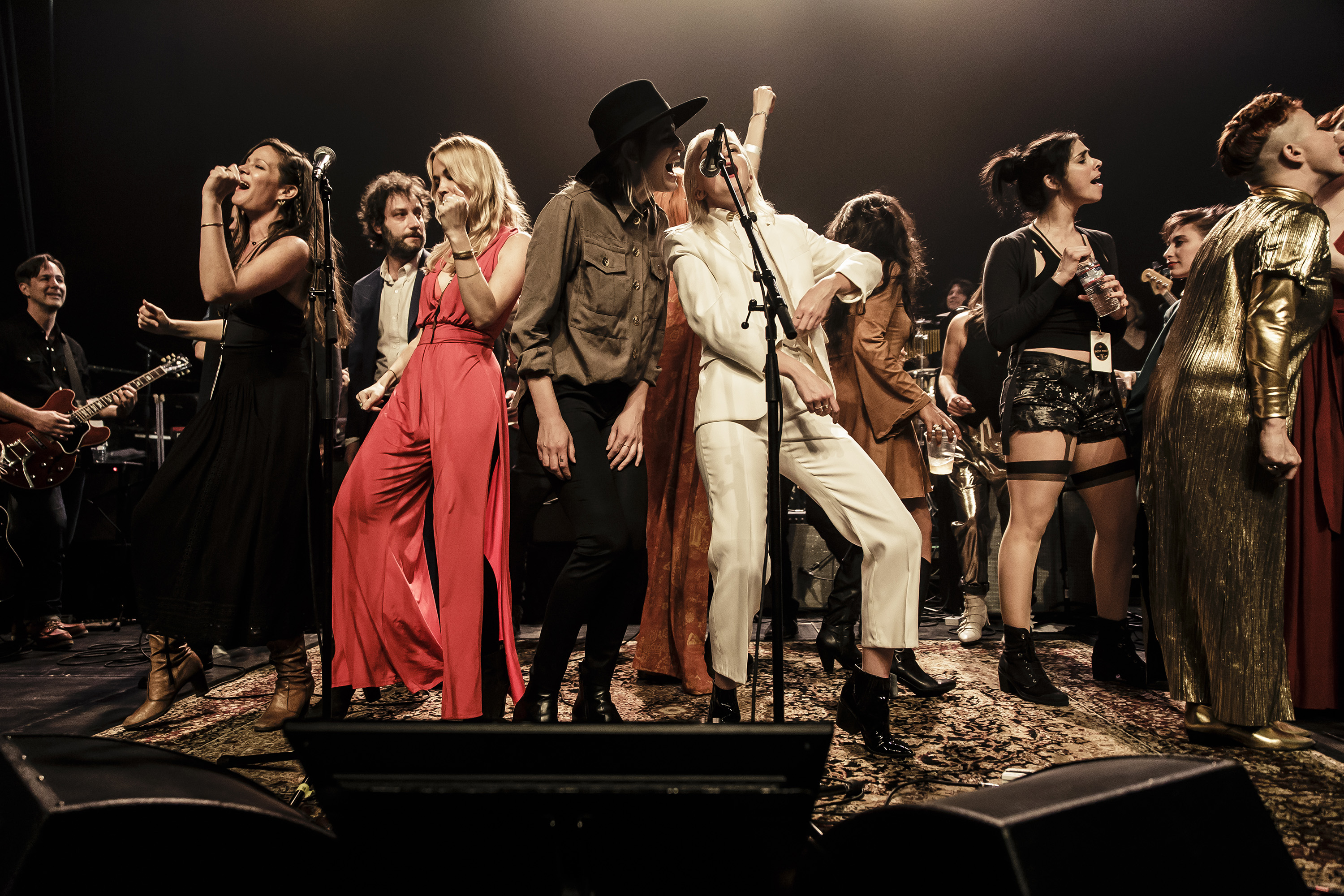 Jess Wolfe and Holly Laessig of the band Lucius performed “I Don’t Wanna Know” in matching gowns of gold and fire-red hair, their voices warm and soaring, swaying at opposite sides of a mic stand.

Scaggs noted that the night would take some “artistic license” with the concept by including solo songs by Mac members, starting with Buckingham’s “Holiday Road,” sung by Jack Dishel. Soon after, Emily Armstrong of Dead Sara sang the Nicks hit “Edge of Seventeen,” dancing in studded black boots, less witchy than street tough, leaning over the front rows as the crowd shouted along to the chorus.

“I’m not the best karaoke singer,” Armstrong told the crowd, but suggested that whenever the song comes on in a bar or on the radio, “you are the best fucking singer.”

Actor Danny Masterson walked onstage with an electric guitar but brought wife Bijou Philips and actor Adam Busch to do the singing on “Second Hand News.” Jamestown Revival performed a twangy “Never Going Back Again” on lap slide and acoustic guitars, singing of sweet and bitter romance and its inevitable end.

Butch Walker brought extra muscle to the night, wearing a Slayer T-shirt to sing “Monday Morning,” stomping and slashing at a Stratocaster. He also praised the show’s house band for a long night of music, learning all the songs and dealing with “10,000 divas, including me.”