“This has really been a trip so far,” Joan Baez said Wednesday night at the Beacon Theatre, before a single note of music had even been played at her star-studded 75th-birthday celebration. It was a little after 8 p.m. when Baez first took the stage in New York, taking in the moment by snapping a photo of the sold-out theater while the crowd gave the singer the first of several standing ovations.

Minutes later, the show began in simple fashion, with Baez performing a series of deeply felt covers of songs by Steve Earle and Phil Ochs on acoustic guitar. Indeed, Baez’s birthday bash, which lasted just under two hours and was filmed by PBS for a June airing as part of the station’s Great Performances series, was, fittingly, a largely subdued affair. She stayed onstage the entire concert, playing acoustic guitar on most songs while her backing band — multi-instrumentalist Dirk Powell and percussionist Gabriel Harris — provided sporadic accompaniment.

Joan Baez remains an icon of the Sixties folk revival, one of the movement’s foremost architects and a lifelong champion of vernacular musical tradition. So despite the grand setting and fancy roster of artists, Wednesday’s show was, true to spirit, a folk concert through and through, full of spontaneous sing-alongs and impromptu lyrical ad-libs, and with nary a single electric guitar to be found onstage.

The first guest was David Bromberg, who accompanied Baez on the Elizabeth Cotten–penned “Freight Train.” The next batch of performers to join Baez were wide-ranging, showing off the impressive scope of collaborators and contemporaries the California-based singer has amassed during her five-and-a-half-decade career. David Crosby added his vocals to an endearingly casual take on “Blackbird,” Damien Rice duetted on the Irish traditional song “She Moved Through the Fair,” and Mary Chapin Carpenter joined the singer for a moving rendition of Donovan’s “Catch the Wind,” dedicated to Baez’s late sister Mimi Farina.

Baez, who turned 75 earlier this month, was in remarkable spirits, cracking jokes, poking fun of her age and even trying out her famous Bob Dylan impression. “This song is I’m sure from somewhere in England or Ireland,” she said while introducing “Seven Curses,” “but Bob Dylan says he wrote it, so that’s how it goes down on Google.” 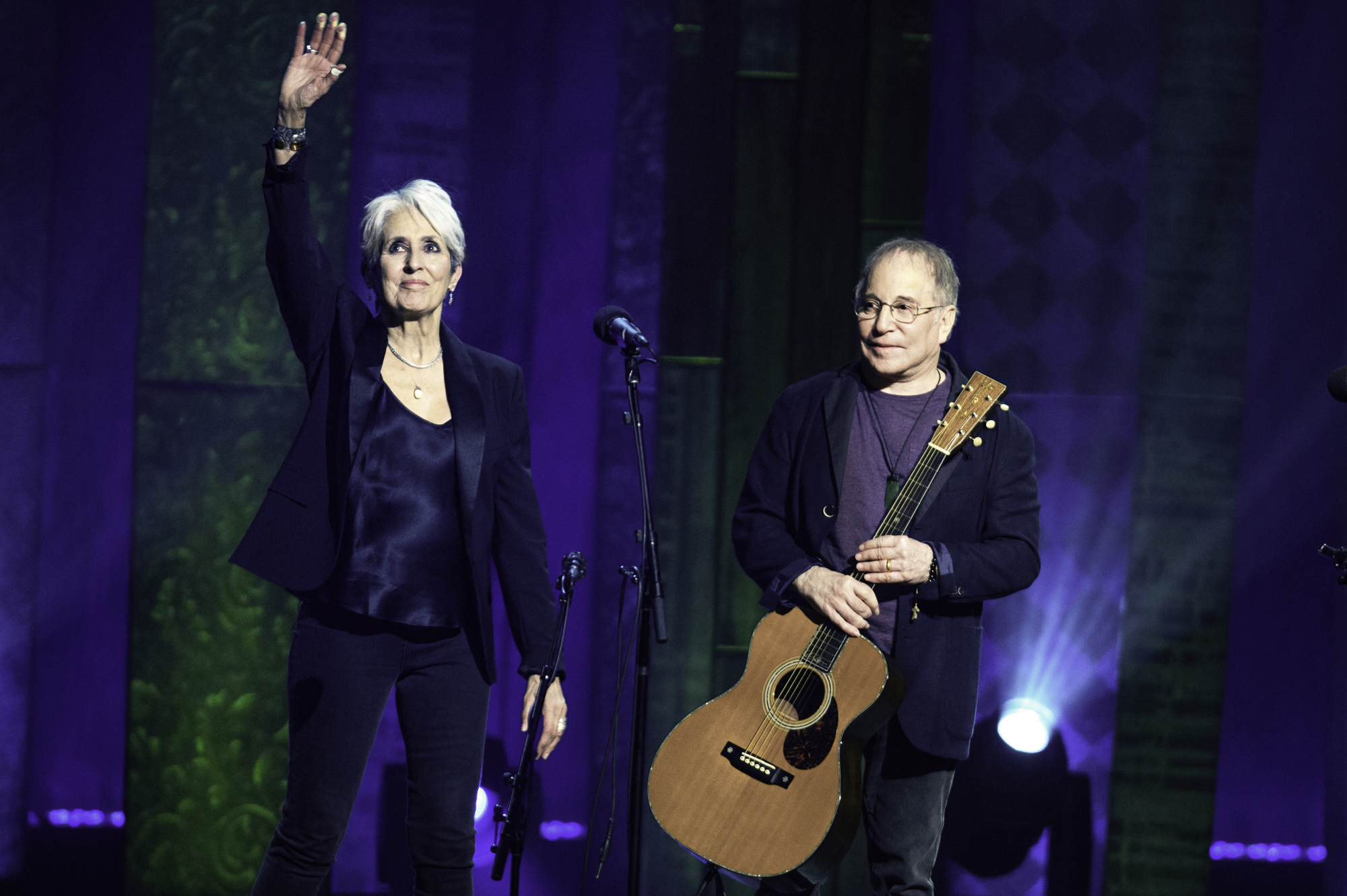 Most everyone expressed extreme reverence for the star of the evening. “I was once one of many, many young women who wanted to be Joan Baez,” gushed Emmylou Harris when taking the stage for a stately piano duet on Stephen Foster’s “Hard Times.” Later on, Chilean folk singer Nano Stern shared his gratitude. “On behalf of the people of Chile,” he said to Baez, “thank you for going over there and shedding some light on the darkness.”

Baez’s 22-song set featured a tasteful mix of well-worn staples and unexpected rarities from her extensive discography. She covered Dylan twice: first, to great effect, during a note-perfect take on “Don’t Think Twice, It’s All Right” with the Indigo Girls; later, during “Forever Young,” the concert’s final farewell prayer.

Baez leaned toward the obscure with contemporaries such as Jackson Browne, with whom she sang Browne’s 1974 song “Before the Deluge,” and Richard Thompson, who traded verses with the evening’s star on his 2015 ballad “She Never Could Resist a Winding Road,” which Baez hinted might be on her next record. Baez, whose current tour is partnered with Amnesty International to raise awareness about mass incarceration, came the closest to making a political statement when introducing Browne’s tune. “It was relevant when it was written and even more relevant now,” she said. “Especially as we head into the abyss.”

At several points, Baez used the retrospective occasion to reflect on her illustrious career, reminiscing about Woodstock and telling the story of the time she was forced to wake up Dr. Martin Luther King Jr. from a nap by singing him “Swing Low, Sweet Chariot.” During her warmly nostalgic take on her signature “Diamonds and Rust” with longtime friend Judy Collins, Baez interrupted the song after singing the line “I bought you some cufflinks.” “They made cufflinks back then,” she added.

The evening’s most exuberant performance came during the pair of a cappella spirituals sung by Mavis Staples alongside Baez. The duo dedicated their first number, the Civil Rights anthem “Oh, Freedom,” to none other than Harry Belafonte, who was in attendance. The main set concluded with a show-stopping performance of “The Boxer” that featured Paul Simon on lead vocals with Baez singing harmony and Richard Thompson on guitar. The crowd erupted into applause when Simon sang the song’s infamous missing verse: “After changes upon changes,” he sang with a smile, “we are more or less the same.”

The night ended shortly thereafter, with Baez eschewing the typical theatrics of an ensemble grand finale sing-along, opting instead for an understated encore that included a duet with her tour assistant, singer/songwriter Grace Stumberg. “Thank you so much,” she said after taking her final bow at the end of an unforgettable evening. “See you in 10 years.”

“God is God”
“There But for Fortune”
“Freight Train” (with David Bromberg)
“Blackbird” (with David Crosby)
“She Moved Through the Fair” (with Damien Rice)
“Catch the Wind” (with Mary Chapin Carpenter)
“Hard Times” (with Emmylou Harris)
“Deportee” (with Jackson Browne and Emmylou Harris)
“Seven Curses”
“Swing Low, Sweet Chariot”
“Oh Freedom” (with Mavis Staples)
“Ain’t Gonna Let Nobody Turn Me Around” (with Mavis Staples)
“The Water Is Wide” (with the Indigo Girls and Mary Chapin Carpenter)
“Don’t Think Twice, It’s All Right” (with the Indigo Girls)
“House of the Rising Sun” (with Richard Thompson and David Bromberg)
“She Never Could Resist a Winding Road” (with Richard Thompson)
“Before the Deluge” (with Jackson Browne)
“Diamonds and Rust” (with Judy Collins)
“Gracias a la Vida” (with Nano Stern)
“The Boxer” (with Paul Simon and Richard Thompson)
“The Night They Drove Old Dixie Down” (with Grace Stumberg)
“Forever Young”