“Some guys like Les Paul, confinement couldn’t hold them so they had to invent stuff,” said blues guitar veteran Joe Louis Walker from outside Manhattan’s Hard Rock Café, where he and dozens of other musicians gathered on June 9th for the Les Paul 100th Anniversary Celebration event. “If it wasn’t for Les Paul, what would we all be playing?” Walker continued. “Acoustic boxes don’t do too good at Madison Square Garden.”

According to legend, Paul was once playing an acoustic blues gig and someone handed him a napkin with the message “turn it up” written on it. Frustrated by the volume limitations of the instrument he created a solid body electric guitar that could be plugged directly into a speaker. The Les Paul – the instrument of choice for artists ranging from Eric Clapton to Randy Rhoads – was born. But that wasn’t his only innovation: the inventor also came up with multitrack recording, which allowed artists to record separate takes of music at different times but have them play back as if they were created in tandem.

“He paved the way for the rest of the industry to follow,” said Journey guitarist Neal Schon, one of seven main players to take the stage during the Les Paul 100th Anniversary Celebration, which took place on Paul’s birthday and nearly six years after his death from pneumonia at age 94. Rather than just a commemoration of the innovator’s influence, the event was a celebration of the electric guitar, as heroes of blues, classic rock and hard rock stepped up to show off their chops. Many of the performers knew and played with Paul, but there were no speeches and little between-song banter. The night wasn’t about verbal praise, it was an event of pure, joyful indulgence, which was very much in the spirit of Paul’s life in music.

“He did so much in his lifetime,” added guitar hero Steve Vai, who said Paul’s achievements in sound technology overshadow his career as an exceptional musician, who made over 20 full-length albums with his wife Mary Ford, as well as Chet Atkins and others. “His playing was very clean and he was one of the guys that was actually the first to solo,” continued Vai. “He played fast notes in single, linear fashion. And then he took it to another level by overdubbing the recording multiple times for the first time ever. So you had this cascading ocean of notes, which was totally unique.”

The Les Paul 100th Anniversary Celebration opened with the Les Paul Trio, which includes guitarist Lou Pallo, who played with Paul for almost 40 years. The group’s set featured “The Lady Is a Tramp,” “Blue Skies” and “Sweet Georgia Brown,” the very last song Paul played onstage at New York’s Iridium, where he performed two sets a week for nearly 15 years, and was often joined by countless prominent guest musicians such as Paul McCartney, Keith Richards, Mark Knopfler and Slash.

“Everyone that worked with Les or sat in with him learned something,” Pallo said. “I learned how to emcee a show, how to back-up singers and a lot of things about guitar phrasing and technique. He was a master.”

After the trio’s set, the Hard Rock event briefly turned from an old-timers revue to a presentation by new kids on the block. Little Kids Rock, a children’s rock school sponsored by the Les Paul Foundation, performed spirited versions of Deep Purple’s “Smoke on the Water” and Led Zeppelin’s “Rock and Roll.” All that was missing was Jack Black jumping up and down and cheering from the wings. 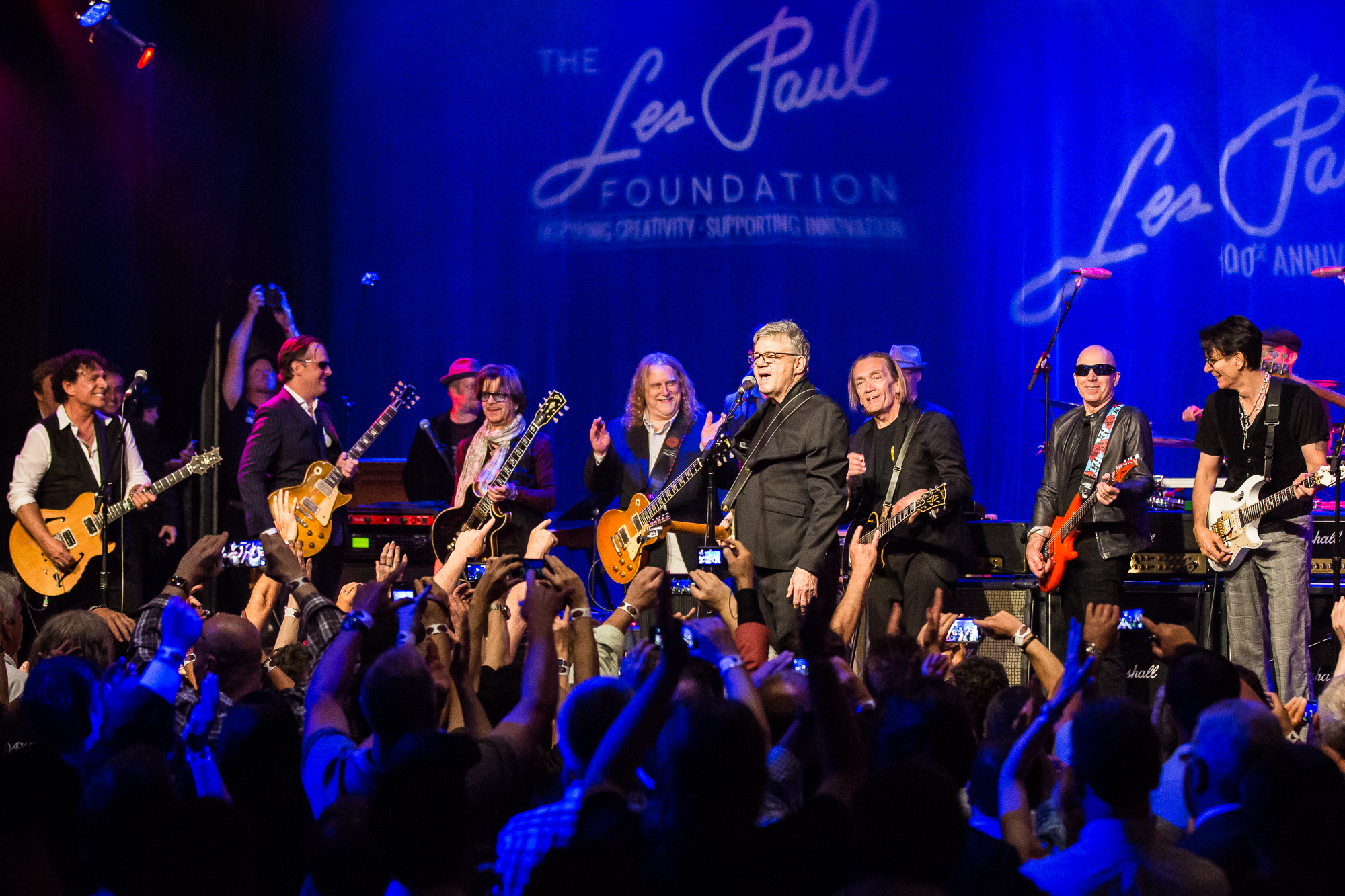 The rest of the performers – jazz and blues instrumentalist Johnny A., Vai, guitar shredder Joe Satriani, modern blues trailblazer Joe Bonamassa, Govt. Mule frontman Warren Haynes and “Space Cowboy” Steve Miller – played with a backing band that included ex–Saturday Night Live musical director and former Hall and Oates lead guitarist G.E. Smith. Despite having had only 90 minutes to practice with each artist, the house band handed the variety of styles deftly and with great enthusiasm.

Satriani stuck to the hits from his 1987 Grammy Award–winning Surfing With the Alien, wowing the crowd with his volcanic “Satch Boogie” and demonstrating his range with the pensive “Always With Me, Always With You.” Though his performance was short, he pulled out all the stops, shifting from jazzy chords to metallic riffs, playing with his teeth and manipulating his instrument so it sounded like it was speaking to the crowd.

Vai pulled from deeper in his catalog, starting with “Racing the World,” a 2012 cut that’s equal parts melodic licks and frenzied shredding. While some of the nuances were lost because he wasn’t loud enough in the mix, he was more audible on “Tender Surrender,” a slower, jazzy number loaded with guitar vibrato. Toward the end of the song the band dropped out and Vai conjured otherworldly tones by simultaneously twisting his volume knob and pumping a wah-wah pedal, then yanking the whammy bar hard so hard it seemed his strings might snap.

Between the two most metal-rooted rockers (neither of whom played Les Pauls), Joe Bonamassa and Warren Haynes performed emotive blues-based sets. Even so, Bonamassa rivaled the speed of the shredders with his precise solos on Muddy Waters’ “All Aboard” and Otis Rush’s “Double Trouble.” Haynes’ playing was full of carefully placed notes and elongated string bends as he showcased Albert King’s version of Etta James’ “Feel Like Breaking Up Somebody’s Home” and the Allman Brothers tearjerker “Soulshine.” He was only one of two players to sing lead vocals during the show.

The other was Steve Miller, the actual godson of Les Paul, who taught him how to play. Miller toasted Paul’s legacy by leading the crowd through a sing-along of “Happy Birthday,” then performed a stirring set while inviting up some of the night’s other players to make cameos, as Paul might have done. Instead of performing any of his hits, Miller stuck to older classics. He began with Rudy Toombs’ “One Mint Julep” done Chet Atkins–style, with guest spots from Bonamassa and Satriani. In contrast with those of most of the evening’s performers, Miller’s leads were slow and deliberate, stressing feeling and phrasing over speed. He closed with Little Walter’s version of “Blues With a Feeling,” which featured harmonica by New York bluesman and Les Paul’s Friend Jon Paris.

Miller grumbled that the show should go on until the wee hours with an all-star jam, but union regulations required the venue to shut off the power at 11 p.m. So the jam was severely truncated, consisting of a lengthy version of Freddie King’s “I’m Tore Down,” and like the grand finale of a July 4th fireworks display, it was simultaneously chaotic, over-the-top and awe-inspiring. There were early sound-mix problems, Johnny A. had to switch his guitar for one that actually worked and when each player took a solo, they sometimes clashed more than they complemented. As the jam neared its conclusion, Miller convinced Smith to abandon his rhythm-guitar post and take a lead break, and he played with agility and grace. Then, everyone soloed simultaneously, creating a dissonance that wasn’t entirely ear-pleasing, but was undeniably powerful. Maybe it was a little overblown, but Paul valued experimentation and the happy accidents that happened on the road to innovation. And he was happiest when making music.

“Playing on the stage is probably one of the only times that I feel like there is a heaven on earth,” he said in the 1980 documentary The Wizard of Waukesha. “I don’t know what the question is and I don’t know who got arrested. I don’t know anything but how wonderful it is for the ends of your fingers to talk to thousands of people out there in that audience.”