It’s fitting that Globalfest — a highly curated showcase for international roots-music acts seeking a foothold in the U.S. — was held this year at New York’s Copacabana nightclub. A fabled mob joint in the Forties, it has a history as a talent crucible. It showcased mambo in the Fifties, R&B in the Sixties (Sam Cooke and the Supremes both cut live albums there), disco in the Seventies (becoming a meme, thanks to Barry Manilow’s tribute song), and salsa in the Eighties. Last Sunday, in the shadow of a government shutdown over a proposed border wall and other anti-immigrant hysteria, artists from Palestine, Mexico, Ukraine, South Africa, Colombia, and Mozambique erased borders, at least for an evening. There was music from the indigenous First Nation Wolastoq tradition of Eastern Canada (the innovative activist composer Jeremy Dutcher), country-blues from the American South (Tennessee’s Amythyst Kiah, who covered Vera Hall and Dolly Parton with equal mastery) and even a flashback to the club’s elegant mid-century heyday in a muscular ballroom performance by Cuba’s Orquesta Akokán. There were virtually no duds among the 11 acts, but here’s our pick of the best.

Will Trump Really Declare a National Emergency to Build the Wall?

Trump Never Had to Build a Wall

47Soul
“This is anti-walls music!” declared Waala Sbeit from the Copacabana ballroom stage. He’s a Palestinian who knows something about the cruelty of borders, and is one quarter of 47Soul, a group whose mix of dubbed-up reggae, rap and electrified Middle Eastern dabke is pretty much its own genre, know as “shamstep.” With a frame drum, darbuka, electric guitar and electronics, including a keyboard that alternately conjured snarling synth-bass and the traditional mijwiz reed flute, the band knew how to work a crowd, even breaking into some traditional dance steps. The chanting, swaying cluster of ladies with head scarves and keffiyeh shawls up front were clearly feeling it. 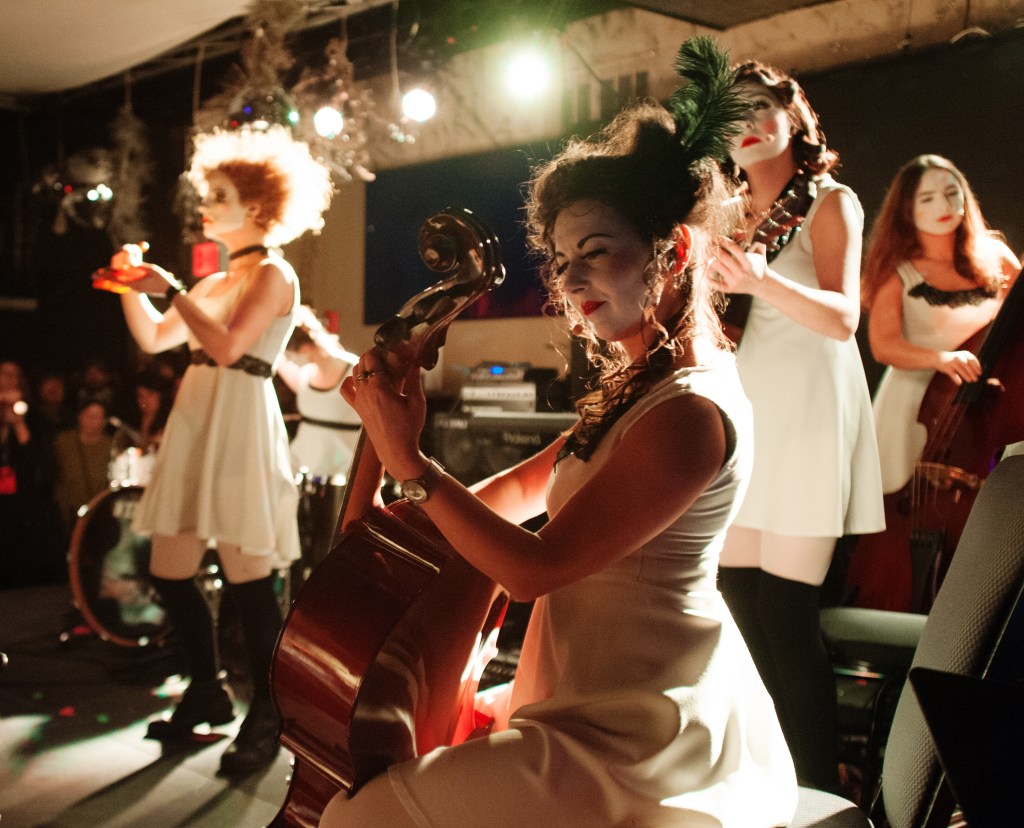 Dakh Daughters
An Instagrammer’s dream, this Ukraine sextet seem to have stomped out of an Edward Gorey cartoon or a Brothers Quay film, with cellos, violin, string bass, flute, accordion, guitar and a drum kit, and members in matching black-and-white leggings, goth tutus, mime-style greasepaint, false eyelashes, rouge, black nail polish, and at least one pair of skull earrings. There were plenty of headset mics to go around; headlamps, too. Oh, yeah, the music: spine-tingling Ukrainian folk harmonizing, French rapping and a reggae jam for good measure. There was a song about a cat with lots of meowing, and a risqué sort of can-can routine. The sound occasional recalled Dhakha Brakha, a previous Globalfest act that also hails from Kiev. But the music might remind you just as much of Tom Waits or Regina Spektor.

Cha-Wa
While Amythyst Kiah represented one impressive take on the roots-music melting pot of the American South, Cha-Wa delivered another very particular one: the hypnotic, kinetic sound of New Orleans Mardi Gras Indian krewes. The outifit’s clear touchstone is the eponymous 1976 LP by the Wild Tchoupitoulas, a landmark that featured the dynastic funk of the Meters and the Neville Brothers driving the street-party jams of uncle George “Big Chief Jolly” Landry. Cha-Wa, with bass lines played on sousaphone, plus a trumpet and two trombones, also bring the city’s brass band tradition to bear. Add sick jazz-funk guitar and two frontmen in full beaded holiday regalia, and the result was a portable Mardi Gras dance party. In between songs, the band gave a history lesson on the connections between African- and Native American cultures that date back to slavery days and inform their tradition. 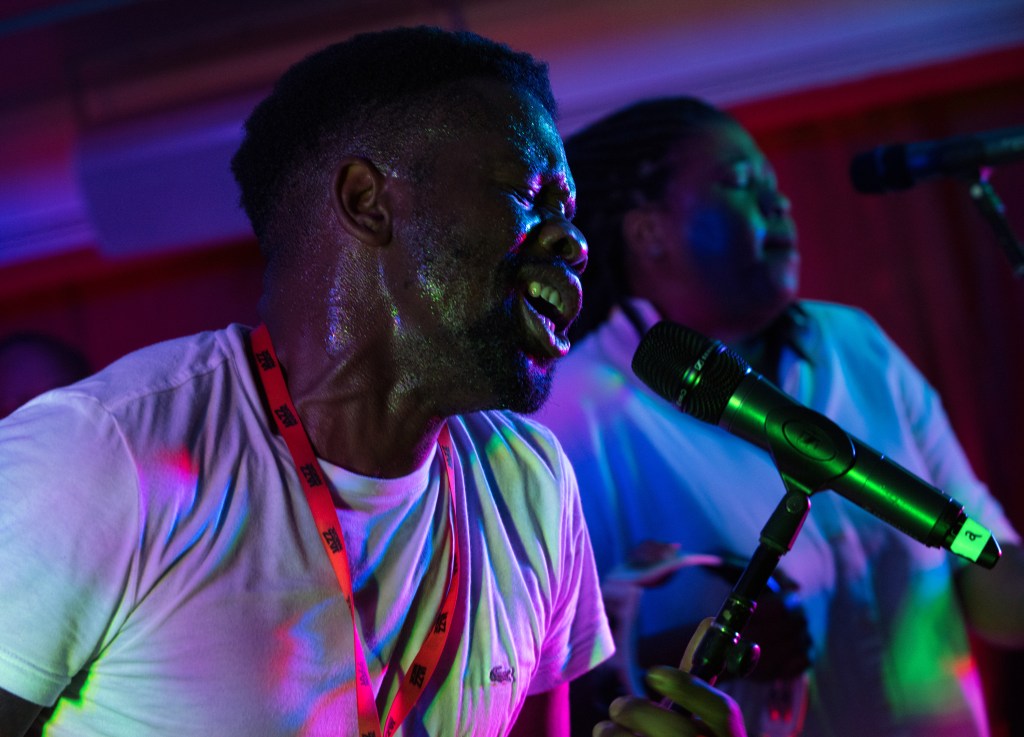 B.C.U.C.
Paul Simon’s Graceland opened the doors on a world of South African music in the 1980s, and B.C.U.C. is a glimpse of the nation’s black townships circa 2019. The group hails from Soweto, and the acronym stands for Bantu Continua Uhuru Consciousness, echoing a kaleidoscope of freedom movements. The music conjures pan-African history, too. There’s a trace of Fela’s freestyle Afrobeat activism in the vocal attack of frontman Zithulele “Jovi” Zabani Nkosi, and the arrangements, built astonishingly on little more than drums and voices, are rooted in tribal beats that spiral into cosmic jazz. The secret weapon was the dazzling low groove of five-string bassist Ephraim Skhumbuzo Mahlangu, whose playing was so relentless, he had to shake out his hands every five or 10 minutes. The set was political revival meeting: Kgomotso Neo Mokone sang gospel-soul lines gilded with dub-style reverb, while Nkosi preached hard, testifying to America as an international inspiration and the need to respect law. With his Izod T-shirt soaked so thoroughly you imagined the alligator slithering off across his pecs, he invoked a metaphor at one point about how right and left hands must wash each other, and one realized we’ve reached a moment in history where South Africa might teach the U.S. a lot. 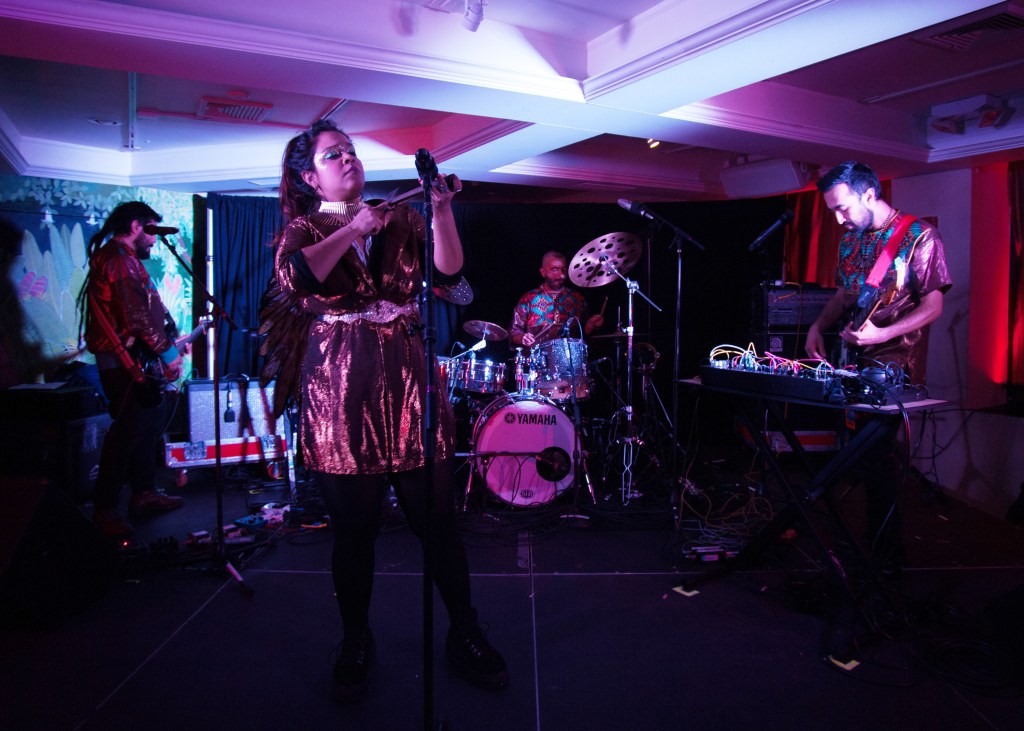 Combo Chimbita
When 83-year-old calypso veteran the Mighty Sparrow was a no-show for health reasons, it was on Combo Chimbita to close the night. They didn’t shrink from the task, building their avant-garde cumbia on the trippy rhythms of bassist and electronics maestro Prince of Queens and a drummer known as Dilemastronauta. The music sometimes veered into deep, near-krautrock groove space. But singer Carolina Oliveros brought it back to earth with fiery, feral shouts, slashing out rhythms on the guacharaca — a signature percussion instrument of cumbia — which she played like it was an extension of her body. In a mask of gold eyeshadow, with a septum piercing and a pair of wings attached to her blouse, she seemed at times about to burst into flames, phoenix-like. And the sweaty crowd of dancers seemed ready to immolate with her.