There is – even at this juncture in my game – a first time for everything. On the gloriously sunny morning of August 1st, I walked through a stone tunnel at Fort Adams State Park in Newport, Rhode Island, into my first Newport Jazz Festival. I was a day late. The 2015 edition opened on July 31st with intriguing prospects – the acclaimed trumpeter Ambrose Akinmusire; the Chicago saxophonist and composer Matana Roberts; Snarky Puppy, the Texas-born, now Brooklyn-based collective of fusion imps with the industrial-metal name. But I was stuck in a nightmare of afternoon traffic, along with (it turned out) half of the John Hollenbeck Large Ensemble. I made up for the delay, though, in bulk: 17 performances across the 1st and 2nd and as much history and modernism as I could hear across Newport’s four stages from midday to dinnertime.

The first Newport Jazz Festival was held in 1954 at the Newport Casino, produced by George Wein, who ran the Boston club Storyville. Wein had been invited by Louis and Elaine Lorillard, a Newport tobacco-fortune couple, to liven up the local summer with some jazz action. A year later, the festival was already making history: Miles Davis – a trumpet star with Charlie Parker in the Forties and arranger Gil Evans on the 1949-50 Birth of the Cool sessions – reentered the ring after a dark sabbatical to kick addiction, illuminating Thelonious Monk‘s magnificent ballad “Round ‘Midnight” with the composer at the piano. Davis was quickly signed to a major deal with Columbia Records; four decades of pioneering music and cast-iron legend followed.

I was at Newport to help celebrate the 60th anniversary of Davis’ festival debut, as a speaker on one of four panels on the Dark Magus hosted by the Grammy-winning jazz critic Ashley Kahn. For an hour on the indoor Storyville Stage, I got to talk about one of my favorite subjects, “Miles and the Electric Guitar,” with author and Downbeat writer Bill Milkowski and guitarist Mike Stern, who I saw with Davis at New York’s Avery Fisher Hall in 1981.

Every other hour was spent in a heavy rotation of hard bop, big-band grandeur, tight, trio swing, serious fun and the seriously out-there. Many sets came with intimate connections: Conrad Herwig’s Latin Jazz Band celebrated the writing of pianist Horace Silver, for whom Herwig played trombone up to Silver’s passing last year; the Philadelphia guitarist Pat Martino honored a primary influence, Wes Montgomery, with a heated trot through the latter’s “Full House,” soloing with brisk invention and bullet-treble tone. And no one I saw settled for mere recital. Dr. John threw striking, darker-blue piano into the swampy menace of “I Walk on Guilded Splinters.” Singer Lisa Fischer, a veteran of the Rolling Stones’ backup chorale and a star of the documentary 20 Feet from Stardom, torched “Fever,” the Little Willie John standard long owned by Peggy Lee, with aerial rapture over the tropicalia-Police-like jamming of her trio, Grand Baton. 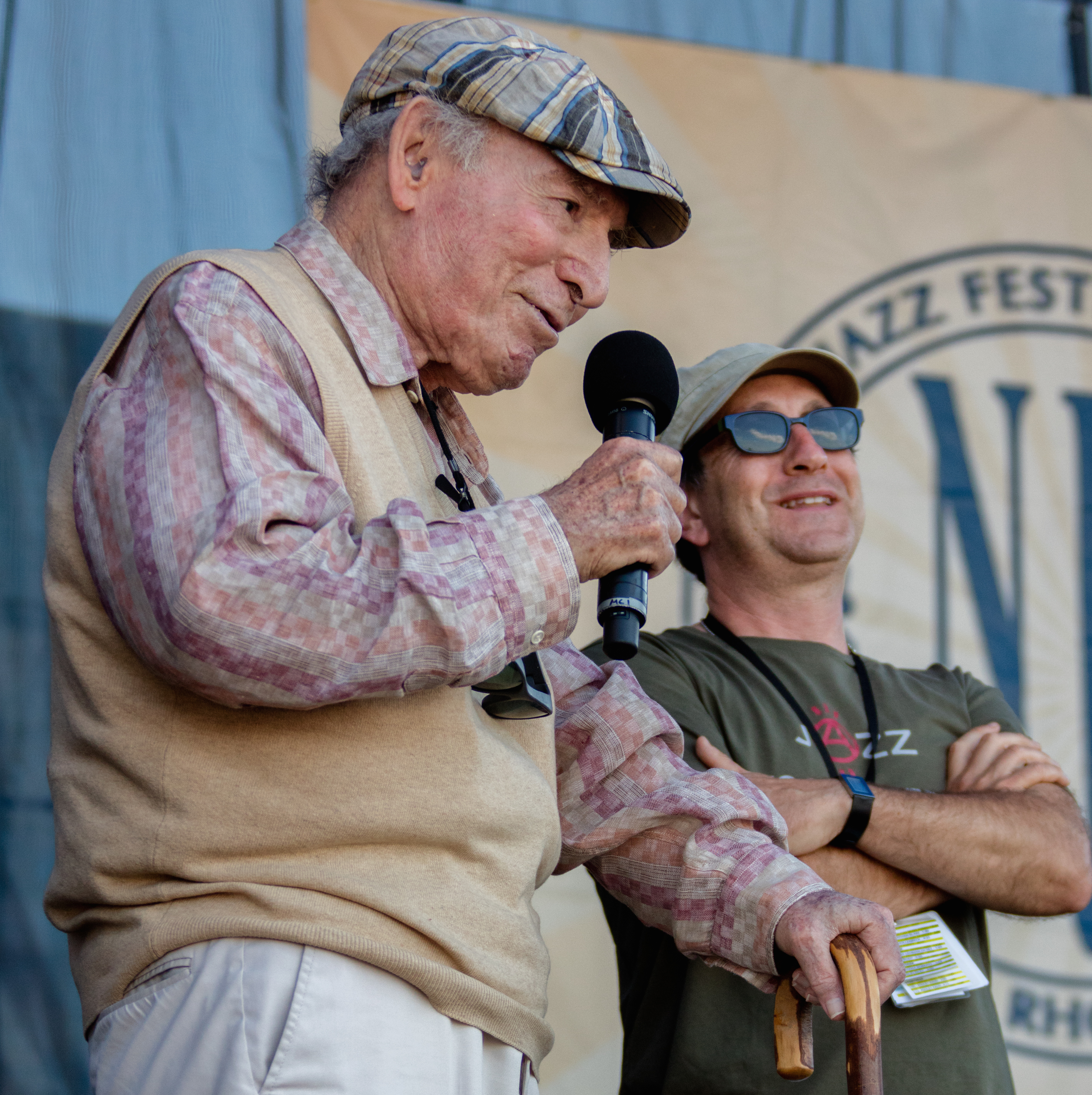 Wein, now 89, was a reassuring, presiding spirit: sitting at the side of the Fort Stage, cane across his lap, listening attentively to drummer Jack DeJohnette‘s avant-all-star band Made in Chicago; introducing the pianist and good-natured fireball Jon Batiste, about to know some star time as the musical director of Late Night With Stephen Colbert. And alto saxophonist Lou Donaldson, Wein’s junior by one year, was my weekend’s comic star. He closed the Harbor Stage on the final day with an organ trio and what he promised, with a rough, deep chuckle, would be “straight-ahead jazz – no fusion, no Kenny G, no Snoop Doggy Dogg, no 50 Cents [sic] that ain’t worth a quarter.” And he delivered – his own 1958 classic “Blue Walk,” Parker’s “Wee” – between affectionate jabs, like the one aimed at a gentleman seated in a VIP chair near the stage: Earl Powell, the son of a late friend, the great, troubled bebop pianist Bud Powell. “He’s fatter than Bud,” Donaldson cracked, after asking Earl to take a bow, then quickly added, “but he’s all right.”

The friendships and unexhausted adventure in this group go back half a century, when DeJohnette and saxophonists Henry Threadgill and Roscoe Mitchell were charter spirits in the Association for the Advancement of Creative Musicians, co-founded in Chicago in 1965 by pianist Muhal Richard Abrams. The four reunited for a set, with bassist Larry Gray, at the Chicago Jazz Festival in 2013, recently issued on CD by ECM. The group’s Newport reprise – an hour-long suite of scored fire music and marathon soloing impulse – was bold reveille, the first main-stage action of the day. DeJohnette’s thundering swing underneath the reeds and Abrams’ circular rain of piano was a timely revelation: a tidal charge of snare and toms that would, pared into something closer to a groove, drive the electric Miles Davis when DeJohnette joined his band in time for Newport in 1969, then the ’69 sessions for Bitches Brew. A final, hurricane round of free-dueling saxes, hammering piano and ecstatic DeJohnette was a reminder that the AACM’s mission – black power dedicated to the pursuit of a truly free jazz – has always been outlaw’s work. Back in ’65, these men wouldn’t have gotten into Newport without paying admission. Today, though, they were honored as warriors and welcomed home.

The primary benefit of watching this Grammy-winning composer at work, from an elevated platform near the back of the stage, was the view of Schneider’s face: the constant, moving dance of concentration and delight in her smile as she led her 18-piece armory of brawn, pastels and, at one surprising point, prog-rock guitar through the ravishing, pictorial memoir of Schneider’s new album, The Thompson Fields (artistShare). She conducted with gestures that suggested immersion as much as direction: drawing her hands up and out from her abdomen, as if the rising volume of the horns was breath itself; swinging her arms like she was holding a baseball bat to cue a knockout power chord; conjuring a cloud of trombones with a wide sweep of her arms, her fingers tingling to the side as a signal to pianist Frank Kimborough. Schneider also knew when to leave her players to their own, inner GPS. At the end of the album’s title piece, guitarist Ben Monder tore through a dirty sweep of rough, distorted notes, into an aria of sustained, soprano feedback. The effect was less jazz than classic Robert Fripp, evoking his searing, elegaic solos in the early-Seventies King Crimson and let loose in broad daylight.

In the beginning, in New Orleans, jazz was a dancing music. Batiste, a native of Kenner, Louisiana and part of the Crescent City’s Batiste dynasty of great jazz and R&B musicians, wasn’t shy about embarrassing his mid-day audience out of its lawn chairs – telling everyone to get on up, then making sure they stayed there by taking his horn section around the back of the stage and deep into the crowd, almost to the harbor walk. The music covered the waterfront too. A “Newport Suite” ran from storm-cloud piano reverie to a Meters-R&B groove, then a drop into a pensive modal-Sixties Miles motif. Out on the grass, Batiste led a sing-along to the Louis Armstrong standby, “On the Sunny Side of the Street.” And there was a solo-piano “Star-Spangled Banner” – immolated a la Hendrix, as if McCoy Tyner and Professor Longhair were Batiste’s fuzz and feedback. This was jazz as rigorously informed entertainment – the exuberant, physical side to an artist I also know from the exceptional, close listening and piano insight on 2006’s Live in New York: At the Rubin Museum of Art. Batiste may soon be late-night TV’s next Roots, but you will know him for much more than that. 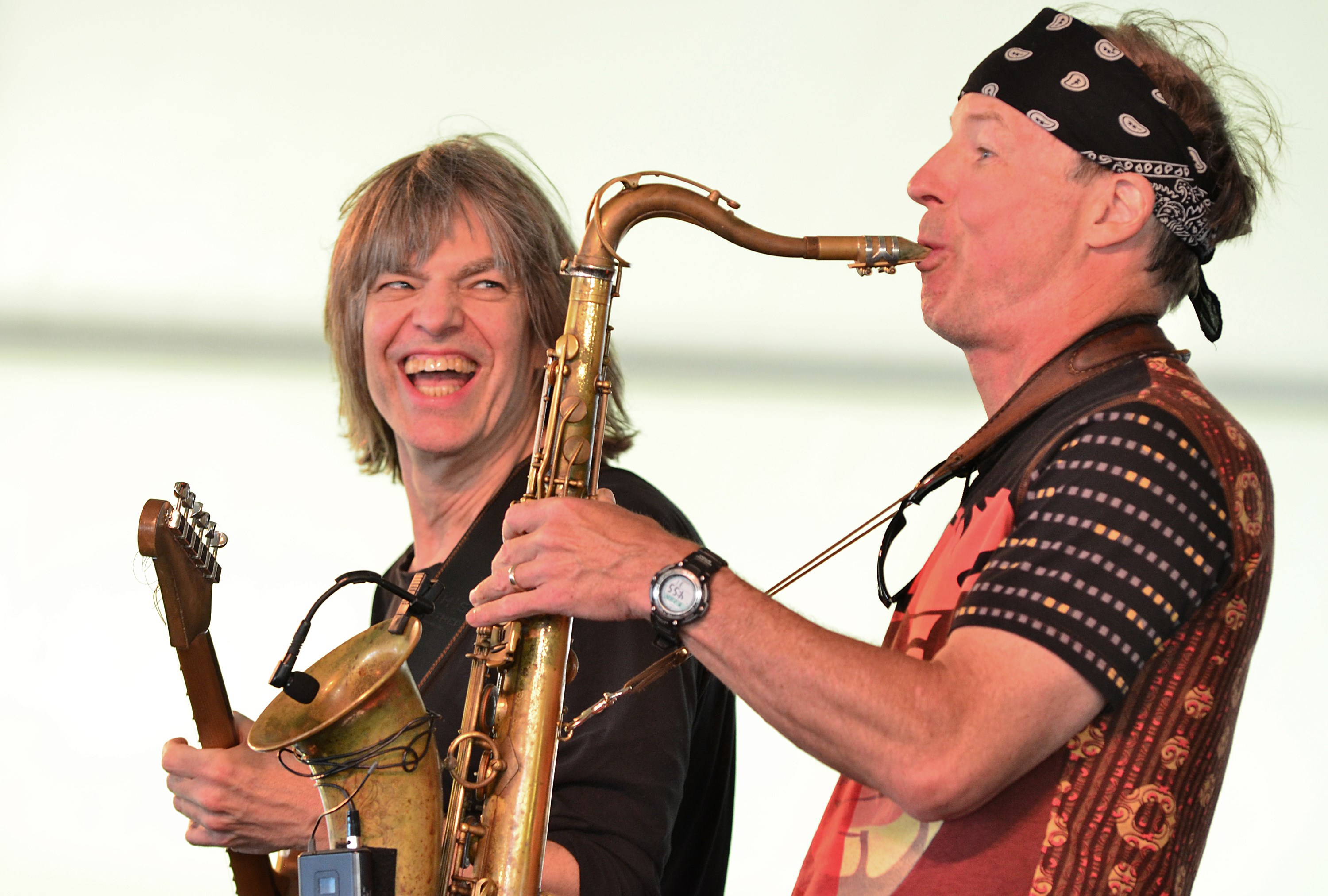 Led by the Mexican-born pianist-son of the Cuban trumpeter Chico O’Farrill, this big band has been a New York blessing since the mid-Nineties. But Arturo, who started out as a teenager under the guidance and encouragement of the avant-jazz composer-pianist Carla Bley, has a roving ear. For this year’s Newport, he integrated the aggressive-Coltrane trills and swoons of saxophonist Rudresh Mahanthappa into the large-scale Latin Ellingtonia of this orchestra’s “Afro Latin Jazz Suite.” Mahanthappa’s opening alto break and a flurry of bozer-like punches from the congueros slid into a Charlie Parker-ballad mood, then a bracing jolt forward as the congueros picked up speed and the brass flew overhead. My personal frame of reference: the brawn and nerve of the first big band I first heard and dug, led in the mid and late-Sixties by the late trumpeter Don Ellis, but here with less knotty time signatures and a lot more Havana.

During that panel on Miles Davis and the pivotal turbulence of electric guitars in his music on and after 1970’s Bitches Brew, Stern was a cheerful, sharing first-hand source on life and picking inside the trumpeter’s recording and road life. He recalled how Davis came to hear him while Stern was playing with ex-Davis and Mahavishnu Orchestra drummer Billy Cobham; reiterated Davis’ obsession with the records and vision of Jimi Hendrix; and pointed out how much Davis loved sheer volume, as in loud. According to Stern, Davis often told his bands, firmly: “Turn it up, or turn it off.”

Before jumping back into the car to New York, I got a long taste of what Stern meant, and how much of his own time with Davis is still rings through his soloing. Stern’s band with saxophonist Bill Evans – another Eighties-Davis alumnus who I see a lot jamming with Gov’t Mule – was hot, loud fusion, a roundabut of solos that was as close to full-on rock as the weekend got. The drummer, notably, was Steve Smith, once of Journey but a long-time jazzman who can still cut away from his swing and sizzle with snare and tom accents fat enough to lift an arena ceiling. Lou Donaldson, over on the Harbor Stage, would not have approved. But if you’re gonna turn it up, you might as well turn it loose