“Turn everything up!” declared Jakob Dylan, standing with a band of journeyman players at the Cinerama Dome movie theater in Los Angeles on Thursday. The occasion was the premiere of Echo in the Canyon, a documentary on the jangly, perceptive folk-rock of mid-Sixties Laurel Canyon that inspired him and generations of musicians.

The eight-song performance followed the 90-minute film, and included songs performed by pioneering Laurel Canyon players Stephen Stills (Buffalo Springfield) and Roger McGuinn (the Byrds). For the Mamas and Papas’ “Go Where You Wanna Go,” the singer Jade swayed behind the mic in cowboy boots and a sparkly purple cocktail dress, trading verses with Dylan as he strummed a white electric guitar. Cat Power and Dylan sang a duet on “Never My Love,” a Top 40 hit from 1967 by the Association.

The film is a collaboration between Dylan, who appears on camera in performance and in various interviews with musicians, and his longtime manager Andrew Slater, who directed Echo in the Canyon. The finished documentary includes vintage songs performed in 2015 at the Orpheum Theater in Los Angeles by Fiona Apple, Beck, Cat Power and Regina Spektor.

Year In Review: From Britney Spears to Fiona Apple, Our Best Podcast Discussions

Peter Jackson Drops Sneak Peek of Beatles Doc 'Get Back'

Echo in the Canyon celebrates Laurel Canyon not just as a physical place, but in all the ways its influence reverberated across the West Coast, even reaching the visiting Beatles. Just outside the screening, Ringo Starr said the Byrds’ David Crosby and McGuinn were among the many new artists the Beatles met on their first trip to Los Angeles.

“We had an incredible day because they introduced us to some crazy stuff Timothy Leary was sending around,” Starr recalled to Rolling Stone with a laugh. “That’s how we got to know each other.” 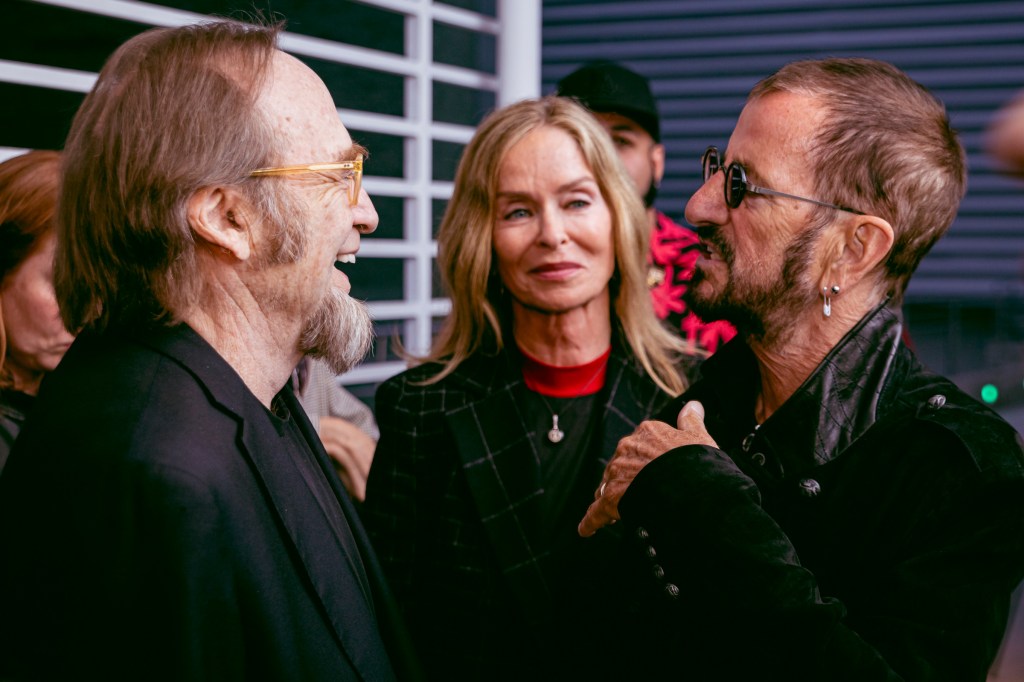 Stephen Stills, Barbara Bach and Ringo Starr attend the ‘Echo In the Canyon’ premiere. Photograph by Carlos Gonzalez/The1point8 for RollingStone.com

Laurel Canyon, the windy stretch of neighborhoods and hillside homes between Sunset Boulevard and the San Fernando Valley, has attracted musicians for generations, but Echo focuses mainly on the spark of inspiration during the 1960s that led to the birth folk-rock in the middle of the decade.

“You can take this music and you can apply it to modern songwriting and technology and it sounds realistic in the new world,” Dylan told Rolling Stone at the premiere’s afterparty.

The film recounts the sharing of ideas and inspiration from one group of musicians to another — flowing from the Beatles to the Byrds to Tom Petty and later rock players. A key influence on the Byrds was Bob Dylan, and McGuinn said the Byrds’ jangly cover of Dylan’s “Mr. Tambourine Man” was the track that “kicked off the whole folk-rock thing.”

For McGuinn, being interviewed by Jakob Dylan added to the flashback sensation of Echo. “It was eerie because I kept looking at Jakob and I kept seeing Bob,” said McGuinn said with a grin. “He looks a lot like him.”

Slater, a platinum-selling producer and former president of Capitol Records, and Dylan began by choosing songs that told a personal story, including moments of stress within a particular band. The Byrds’ 1967 recording of “Goin’ Back” (written by Gerry Goffin and Carole King) came amid creative tension that led to Crosby’s exit. The Mamas and Papas’ first single, 1965’s “Go Where You Wanna Go,” was written by John Phillips after his wife and bandmate Michelle had an affair, as she explains happily in the documentary.

Framing the film is Buffalo Springfield’s “Expecting to Fly,” a Neil Young composition that Stills now says was a vivid statement on Young’s leaving the band. Young isn’t interviewed in Echo in the Canyon, but appears in its final minutes recording a guitar solo for a collaboration with Jakob Dylan. The footage is raw and grainy, looking almost like surveillance video. “Yeah, like Bigfoot,” Dylan joked of Young’s cameo. 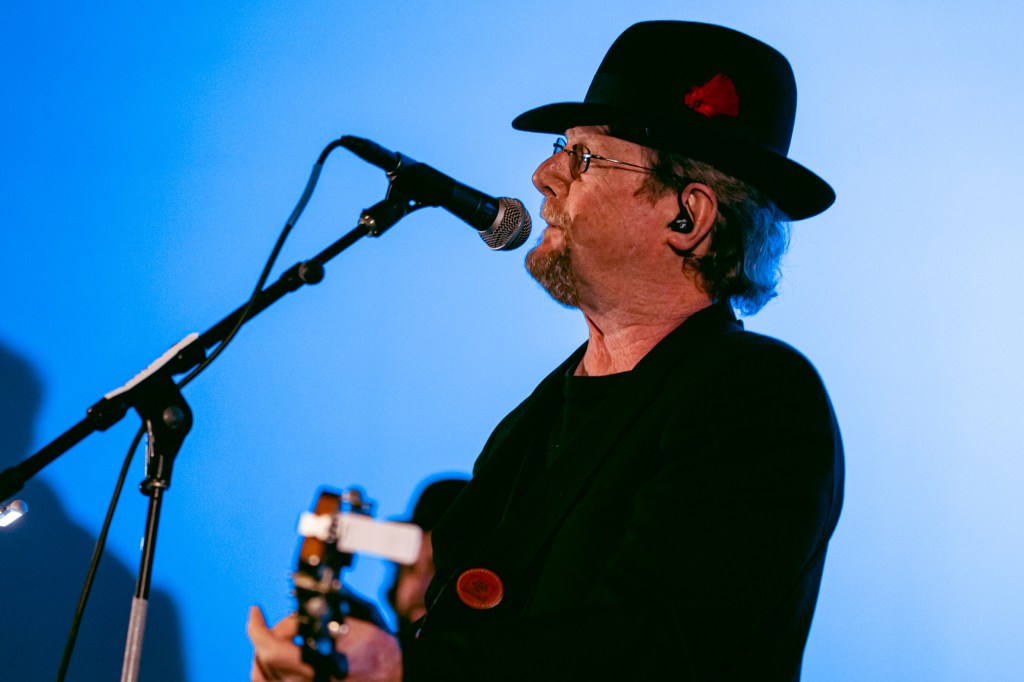 Roger McGuinn performs during the ‘Echo In the Canyon’ premiere. Photograph by Carlos Gonzalez/The1point8 for RollingStone.com

The film opens with footage of Dylan and Petty examining some vintage amps and guitars, and they settle on the proper pronunciation of Rickenbacker guitars famously favored both by the Byrds and the early Beatles. Petty died in 2017.

“Tom’s portion of the film has become more poignant since his passing to other people. I thought it was plenty poignant beforehand,” Dylan said. “At the time it was just nothing but joyful and awesome that Tom gave us the time.”

He calls Petty an especially crucial inspiration, and as a teenager he got to watch Petty and his Heartbreakers repeatedly when they toured with his father Bob Dylan in 1986–87. “I learned most of the things I know from watching the Heartbreakers be that perfect band,” said Jakob. “I’ve been around plenty of people of that generation and not all of them are encouraging and awesome and cool. Tom was the coolest and the nicest of all of them without a doubt.”

The documentary also catches up with Dylan, Beck, Cat Power, Regina Spektor and Jade during a rehearsal up in the Hollywood Hills, as they gather around stacks of classic albums and singles from the period.

“The thing that binds everybody is songs,” said Dylan of the younger generation of players in the film. “Those people are my contemporaries — they’re all songwriters and they all have a connection to Southern California — either growing up here or being transplants. They seem to have an experience with the Canyon.”

“To me it’s more about the echo than the Canyon,” added Slater, who also manages and has produced Apple. “It’s more about the echo of those ideas going between everyone in those bands, between the bands themselves and in a sense across time. You hear the work of the Byrds in Beck’s work. You can hear a little bit of the Beach Boys here and there in some Fiona. And of course you hear all of it in the Wallflowers’ work. So the Canyon really just represents the place where it takes place. The film is about the exchange of ideas and how it’s resonated over time.”