“I cannot wait to get back to Paris,” Eagles of Death Metal’s Jesse Hughes said in a late-November interview, just weeks after the band’s concert at the Bataclan was abruptly interrupted by an ISIL terror attack that left 90 people dead. After a two-song warm-up alongside U2 in December, and after kicking off their Nos Amis Tour in Stockholm on February 13th, the band kept their word and played at the Olympia in Paris on Tuesday, a historic evening charged with emotion, catharsis and, well, rock & roll.

Some 900 survivors attended the show (admission for them and the victims’ families was free), some still recovering from their physical injuries and most struggling with mixed emotions and fearing they would panic and relive November 13th all over again. Yet they were brave enough to come in an attempt to create new memories and mental images that would allow them to heal. And the fact that the concert was not at the Bataclan, which remains closed until the end of the year, certainly eased the process, as did the presence of an on-site psychological support team set up for the occasion to help survivors cope with potential panic attacks triggered by memories of the tragic gig. Many survivors chose to remain close to the exits.

Having lost a dear friend at the Bataclan, I too was apprehensive at first. Isn’t it too soon for the band to be finishing their Bataclan show? But if my surviving friends — including a rock photographer who was shot — were brave enough to attend (and enjoy the show, as I later found out), then I had no right to be overtaken by worry. My friend who was killed, a rock journalist, would most likely have attended as well. In fact, the Olympia was the safest place to be in Paris on Tuesday night. Security was so tight that a war could have broken out right outside, and we would still have felt safe. A large perimeter surrounding the legendary venue was cordoned off and included armed police and at least four security checks outside and inside the venue, using metal detectors and body searches. Reassuring, indeed.

And once inside, a woman distributing free hugs was ready to greet us with open arms.

Austrian duo White Miles, who opened for EODM on that fateful night and whose singer was injured during the attack, once again supported the California band this time around. While they were playing their energetic set at the Olympia, the pit was warming up and fans continued to pour in. The bar and the surrounding area were also full to capacity. It seemed a less somber occasion than I expected, yet no one was quite letting go yet. Mixed emotions flowed as much as the beer.

9:06pm: The crowd gets loud, beckoning the band to appear.

9:11pm: EODM singer Jesse Hughes, sporting a red cape, walks on stage while Gallic crooner Jacques Dutronc’s iconic “Il est cinq heures, Paris s’éveille” (“It is five o’clock, Paris awakens”) plays, a symbolic choice as the song is about starting a new day. It is a raw two minutes, a strange mix of sadness and relief, and a knowledge that life became less innocent and more vulnerable after November 13th just as it did after 9/11. The band is applauded throughout the duration of the 1968 tune, Hughes blowing kisses and waving to the audience, before they break into “I Only Want You.”

“Elvis is here!” enthuses one fan, unaware that it is EODM co-founder Josh Homme. “He looks just like Elvis, don’t you think?” Yes, he does. Ginger Elvis, as Homme is often known and who typically doesn’t tour with the band, was on drum duty alongside drummer Julian Dorio, as his homage to Paris, where his more-famous group, Queens of the Stone Age, commands a huge following. The band marks a pause mid-song when Jesse Hughes requests “60 seconds of silence, please. Let’s take a minute to remember — then we get back to having fun.” And that set the tone for the night. He had promised a rock & roll show and that’s what Paris was going to get.

During “Don’t Speak (I Came to Make a Bang)”, the band cranks it up for their amis, and not all of them are Parisian. Some have traveled from other cities across the country. Before “Bag o’ Miracles,” Hughes makes a declaration of love, one of many during the evening: “I love you all so much, so glad to see you all here tonight.”

Jesse Hughes has some moves in his hips. Dressed in blue denim, an EODM tour T-shirt and his signature red suspenders, he could have been starring in a more R-rated version of Grease. He later changes into a black shirt with eagle wings, made by Indianapolis tailor Jerry Atwood, to match his bandmates.

It is like attending mass rather than a concert. Hughes knows how to get the crowd going like a cable-TV preacher. “Y’all, we are here to have a good time tonight. Ain’t nobody gonna stops us! Can I get an amen?” he yells in his Southern drawl. His references to the terror attack are discreet and respectful. He is not here to open wounds or make politically correct speeches but to offer catharsis through fun and a high-powered, indefatigable performance. And lots of love and rock. “I want to propose a toast. I see a room full of champions, nos amis. I fucking love you all the time.” Cue the audience to sing along to “I Love You All the Time,” which has become an anthem for Parisians to fight fear and atrocity with amour.

Hughes also shows his love by sporting a scarf in the colors of the French flag knitted by a fan. “I want to identify the maker of this beautiful scarf. Whoever it is, I wanna give you a big ol’ cocoa and a big ol’ hug after the show.” For now, it will be a “Cherry Cola.” And when the band prepares to play “Silverlake (K.S.O.F.M.),” with Josh Homme contributing vocals, Hughes strikes a deal with the crowd: “This is an emotional moment for me, so if my voice fucks up on this song, you won’t be mad at me.”  While Doro takes over drumming duties by himself, Homme takes a break and flicks through the tour program, occasionally stopping to hit a beat.

On “Oh Girl,” Hughes and Matt McJunkins rub their guitar and bass together, respectively, one of the show’s many theatrical moments. At the end of the song, Hughes points to Homme/Elvis: “That’s my best friend behind me, y’all.” Meanwhile, the frontman smashes his white guitar during “I Got a Feelin (Just Nineteen)” and replaces it with a red one. The crowd spontaneously chants a tune following “The Reverend,” some taking selfies with their back to the stage, and Hughes feels inspired. “That’s like a whole new song I’m gonna steal from y’all — I hope you know that.”

The band’s appeal is wide, the audience ranging in age from teens to rockers in their fifties. Yet the generational gap is nonexistent, as they all sing along to each song, dance, hug one another and yet retain a certain demureness regarding the tragic circumstances.

The band pulled “Kiss the Devil” out of the set list on this tour, a song they won’t be playing for a long time as it marks the moment when the Bataclan was attacked and that still haunts the survivors. 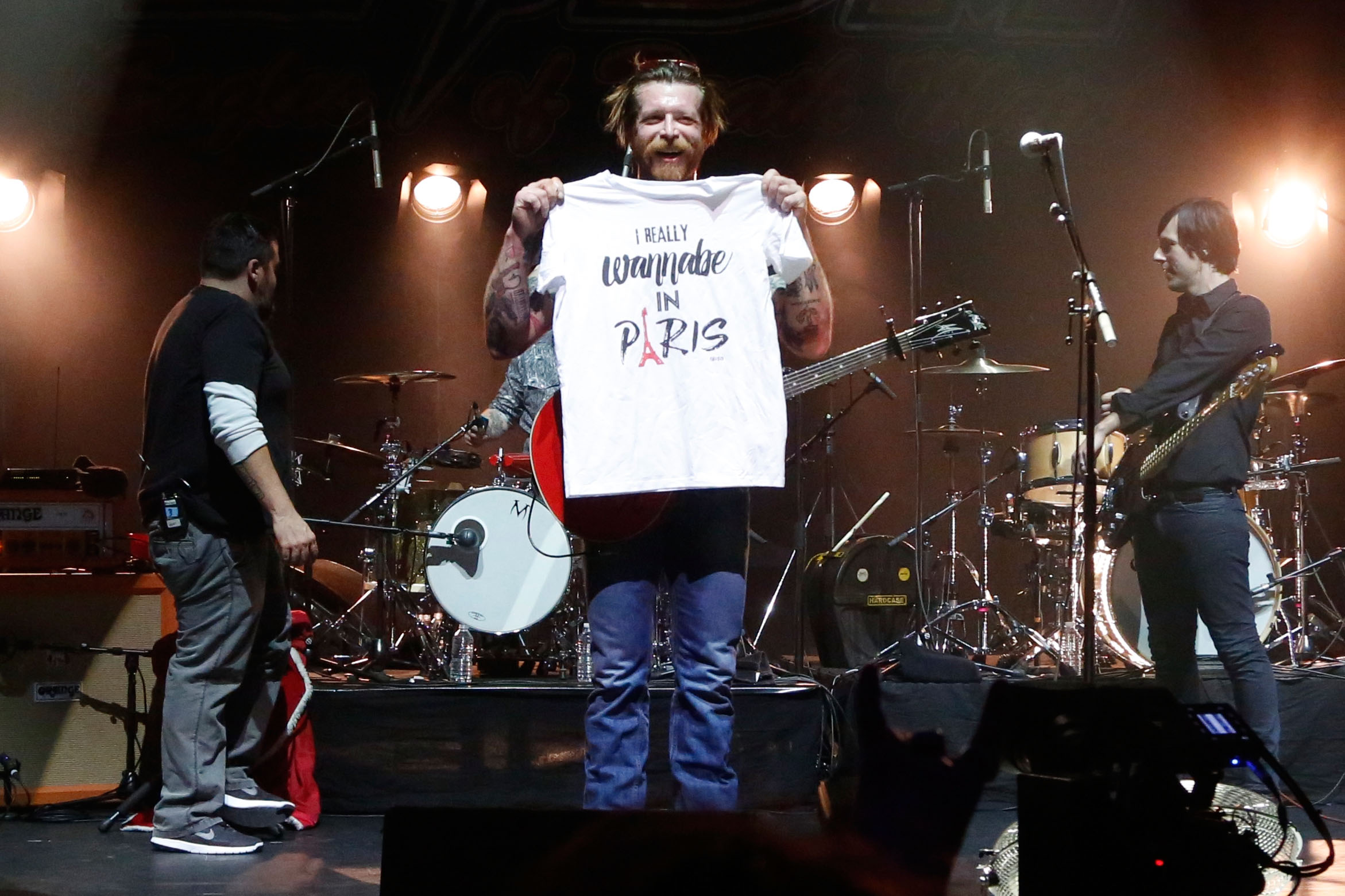 The floor quakes during “Got a Woman.” The band seems inspired, using music as a tool of mass inspiration for their wounded fans. While Hughes’ recent comments about gun control in France were largely reported on, he’s really a musician who uses his ax as a weapon. And he had more of it coming during “Miss Alyssa” and “Move in the Night,” while “Secret Plans” is dedicated to Nick Alexander — who worked at the merch table on that fateful night at the Bataclan and was killed in the attack — and “Wannabe in L.A.” is reworked into “Wannabe in Paris.”

A disturbing smell distracts me from Hughes’ Elvis-meets-Travolta dance moves. Ciel! Someone is smoking — only a cigarette. (I told you security was tight.)

Growing impatient after a six-minute wait for the encore, the crowd begins to chant the White Stripes’ “Seven Nation Army,” a tradition at Parisian concerts. Jesse Hughes returns alone to an outrageous ovation. And when he holds up his Bleu Blanc Rouge or tricolore guitar like Joan of Arc holding high her sword, the venue goes wild. “You’re stuck with me now,” he says. “I’m Parisian now. You have no idea how much I love you mofos.” Watch out, Paris.

Before resuming, he downs a drink while the crowd cheers him on, like a game at a bar.

“It’ll be a miracle if I walk off the stage tonight,” he says. “I’m so drunk right now.” He appears to be drowning his emotions in drink to remain strong in front of a very particular crowd. He asks the fans what they want to hear, but he’s not too enthused by the suggestions. “How come every time you pick the songs I’m terrible at?” He plays a few notes before sharing that he’s nervous. “You know how nervous I am? I snapped a tendon in my middle finger, so if I fuck up this song you forgive me.”

His middle finger works fine as he covers, all alone, the Rolling Stones classic “Brown Sugar” with a little help from his amis on the chorus. As for his other friends, “Let’s get the rest of these rock & roll outlaws back on stage.” The crowd sings the chorus during the band’s first encore, their cover of Duran Duran’s “Save a Prayer.” It is a visceral performance, perhaps the most emotionally charged moment of the show. (Incidentally, Duran Duran were in Paris on the night of the attacks and due to join EODM at the Bataclan aftershow.)

Two vertical banners on both sides of the stage show Hughes as Uncle Sam proclaiming, “I only want you.” He explains their presence as part of the changes made “to improve the quality of the show.” But he’s really “bad news,” he claims, as they break into “I Want You So Hard (Boy’s Bad News).” The ground quakes once more as Hughes disappears backstage, while Dave Catching goes over t0 Homme, who hits the notes on the guitar with a flick of his wrist. And when Hughes reappears on the balcony in the middle of the audience showing off his guitar heroics, the band takes a break and drinks water. Josh reads; Matt films the audience with his phone. And then a 10-minute battle of the axes ensues, as Jesse and Dave outdo one another, until he descends back onstage. Josh, smoking, hands him the tricolor scarf. But the battle is not over yet.

“It’s too dangerous, Dave, don’t do it,” Hughes pleads with the bearded wonder who is tying a black bandana over his eyes, or rather sunglasses, to pluck on those strings one last amazing time before the show closes with “Speaking in Tongues.”

More than just making good on their promise to Paris, the Eagles of Death Metal made a triumphant, frenzied return, certainly the best two-hour therapy most of us could have asked for. They reclaimed the stage, and the survivors reclaimed a part of their lives.

Upon seeing the band’s name on the marquee outside, one Bataclan survivor remarked: “We finally got our revenge.” And that basically sums up the general feeling — this is France, after all, a country synonymous with style and revolution. No one can take that away from us. And last night EODM reminded us of that and gave everyone a semblance of hope. As Jesse Hughes said towards the end, “I hope y’all are having as good a time as I am. I needed this shit.” We all did.