MIAMI — The future never looks quite as bold as humans envision it to be. Save for touchscreen tech and an electric car monopoly, the promises of the present decade have been largely squandered by a relentless pandemic that rages on more than two years after it began. Still, despite the sea of masked faces singing back at her during the first show of her long-awaited Future Nostalgia tour, an exhilarated Dua Lipa dared to conjure an alternative version of both past and future: one in which a once-in-a-century event never interrupted her inevitable rise to the top of the pop music throne.

Dua’s fans have been waiting a long time for the singer to bring her retro-futuristic blockbuster to the stage. The tour was first announced in December 2019 and delayed three times before finally kicking off at Miami’s FTX Arena last night. Much of the South Florida crowd opted for jackets as a cold front dipped temperatures into rarified sub-65-degree territory, but many ignored the weather with their creative takes on future-nostalgic fashion: shimmering gold getups, galactic insignia, a handful of white pleather go-go boots, a couple of baby-pink wigs, and lots of sequins.

Opening acts Lolo Zouaï and Caroline Polachek were well received by the crowd. Polachek in particular commanded a respectable amount of phone recordings from the pit as she emerged draped in a translucent, nymph-inspired outfit which enabled elastic high kicks to match her towering vocals.

Following some on-the-nose disco classics playing between sets, the house lights lowered as Purple Disco Machine’s “Body Funk” blared over the speakers. The main stage backdrop cut to static before revealing the words “In Stereocolor: Future Nostalgia” with Miami Vice-style graphics. In keeping with the Eighties aesthetics, dancers were introduced via a color-blocked, aerobics-themed credit montage as the first notes of Lipa’s “Physical” echoed throughout the arena.

'A Round of Applause for the Number One Artist on the Planet': Bad Bunny's Seismic Yankee Stadium Show Was One for the Books 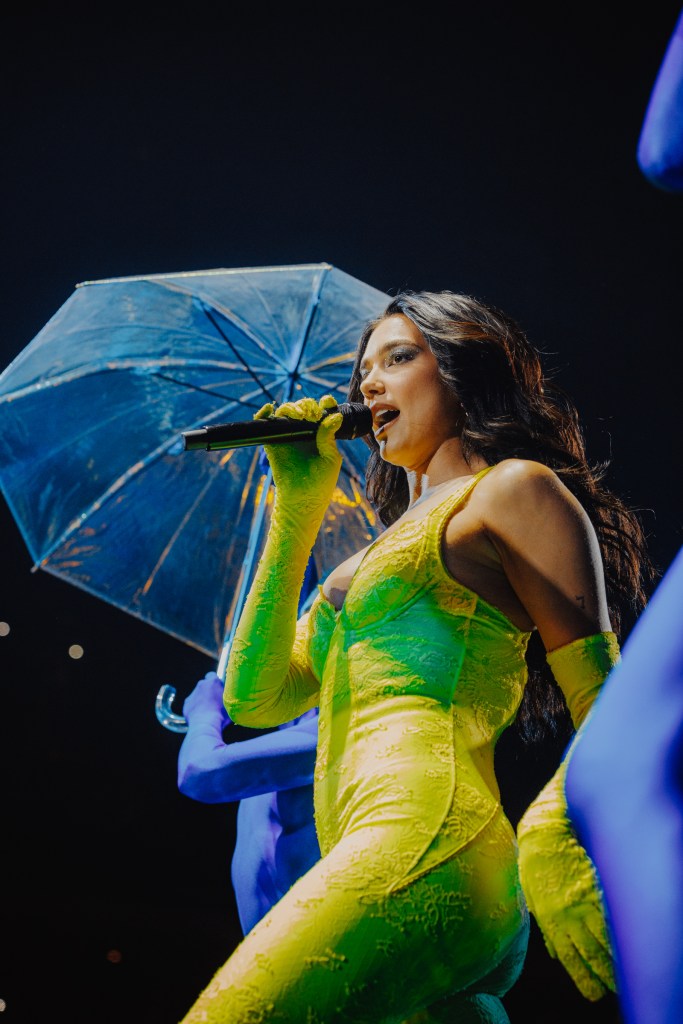 Emerging in a corseted neon-yellow bodysuit with matching elbow-length gloves by Balenciaga, Lipa leaned into the single’s Olivia Newton-John allusions and hit center stage at a ballet barre, flanked by dancers in bright-blue skin-tight numbers and baggy outfits resembling workout wear. Vamping down the runway bisecting the pit, Lipa looked every bit the female alpha she proclaimed herself to be on the album’s title track as she powered through a high-energy, 90-minute, 18-song set.  She honed in almost exclusively on her celebrated second album, including its expanded Moonlight Edition, along with two songs off her self-titled debut and her collaborations with Calvin Harris, Silk City, and Elton John. Even her hit single “IDGAF” was relegated to interlude territory as the setlist doubled down on the sheer strength of Future Nostalgia.

“Wow, Miami, we’ve been waiting two years to put on this show for you,” Lipa told the crowd early in the show’s first act. As excited as her fans were to see Club Future Nostalgia come to life, the star onstage appeared to be the most effervescent person in the room. Her dancing has been memed and mocked in the past, but it’s clear she’s been grinding it out in the dance studio. The crowd cheered as she tackled some of the more acrobatic choreography in the set, keeping her sultry, deep vocals steady as she slid in between her dancers’ legs and was lifted overhead by backup dancers. 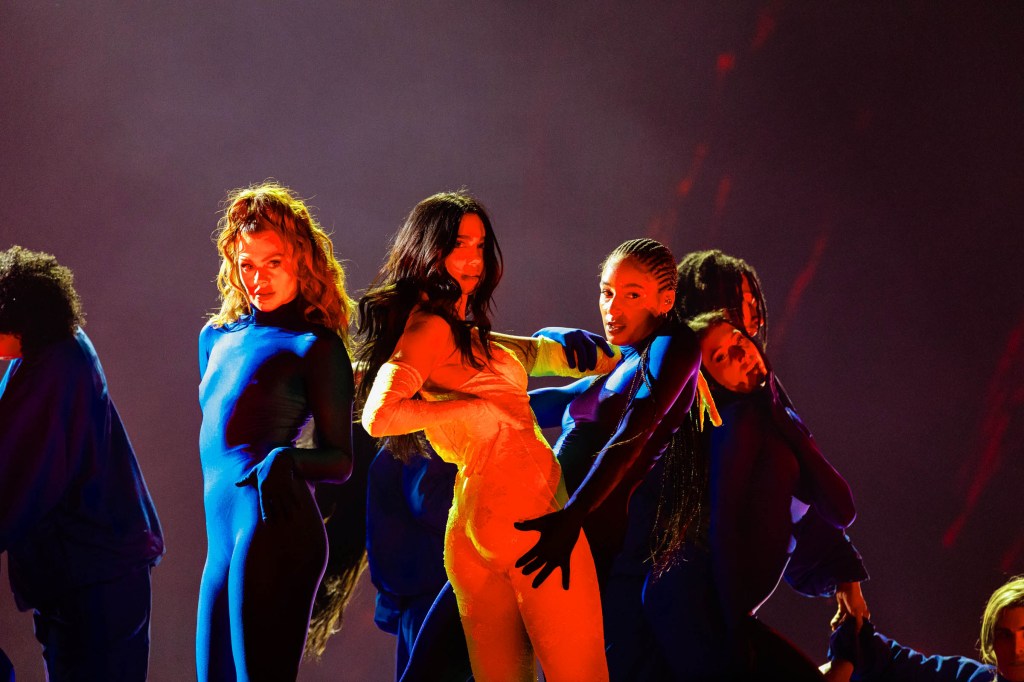 In a moment that will be familiar to fans who tuned into her Studio 2054 livestream, Lipa was joined onstage by dancers in light-up rollerblades as she sang “Cool” in the shadow of a CGI disco ball before unceremoniously sprinting off the stage for a costume change soon after. Fans screamed along to “IDGAF” during the interlude that followed, but the clumsy transition dialed down the energy — an opening night pacing fumble that should no doubt get worked out as the tour progresses.

Heading into the second act, the show hit pause on the Eighties homage in favor of a graphic novel theme that transported Lipa to an undersea set. In a white, shimmering one-piece, Lipa sang Nostalgia B-side “We’re Good” while sitting in front of a massive lobster prop that would have fit right in at Katy Perry’s Left Shark halftime show.

The moment brought to mind the ever-shifting pop landscape that Lipa has been vying for a prime place in since she broke through in 2017. The pandemic may have ground daily life to a halt, but the pop music bullet train never stopped running. In the nearly two years since Future Nostalgia was released, Perry launched a Vegas residency, Olivia Rodrigo rewrote the pop-queen playbook, Lady Gaga blasted out of Chromatica to enter the House of Gucci, and Taylor Swift released four albums. Releasing an LP2 is already a notoriously tricky hurdle for any pop star to clear, but a two-year pause on performances and promotion threatened to squander the momentum Lipa built ahead of Nostalgia’s release. 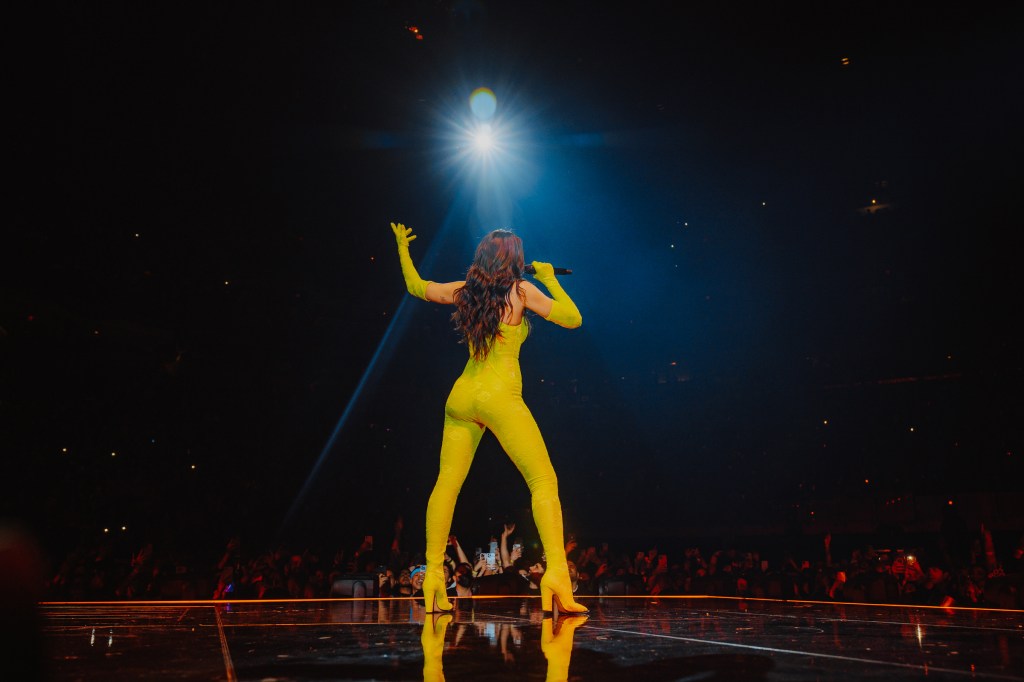 Lipa has expertly maneuvered curveballs since the album first leaked during the star-crossed month of March 2020. She’s found ways to maintain public attention on the record for the better part of two years through an expanded edition, a remix album, and a widely lauded livestream concert.

By the time she busted out “Hallucinate” in the third act of the concert, clad in a black top and short-shorts with hot pink tights and sneakers, Lipa let loose and forwent the choreography, jumping around the secondary stage in the same carefree way she might have done at a warehouse rave back home in London.

Then  — just in case the audience needed a reminder of the superstar she’s become — Lipa emerged one final time in a blinding, sparkling black cutout bodysuit that recalled Cher’s indelible “If I Could Turn Back Time” outfit, whipping her hair around as she belted out an aggressive take on Future Nostalgia’s title track before closing with “Don’t Start Now.”

The display served as a powerful reminder of Lipa’s pop savvy. It may have taken a couple extra years to bring Future Nostalgia to the stage, but she used that time to hone her powers and return as an even stronger, certified pop diva.