So ends a summer in which the three biggest hip-hop tours doubled as premises for future slash fiction shorts. Beyoncé and Jay Z have been acting out their scenes from a troubled marriage in arenas across the country. Eminem and Rihanna brought their studied rebelliousness to a football fields in New York, L.A. and Detroit. And last night, Drake and Lil Wayne, perhaps the only pair who truly are in love with each other, staged a battle of the ages at an old tennis stadium in once-quiet part of Queens.

The show began with a Street Fighter montage that introduced the competitors and set the stakes: The night’s prize would be immortality; immortality would be decided via votes cast through a “Drake vs. Lil Wayne” iPhone app that was nearly impossible to download in this cozy, low-bandwidth neighborhood. Wayne, who wouldn’t play a single song released before 2004’s “Go DJ,” effectively ignoring the first third of career, struck first, warming the crowd up with Carter IV tunes like “Blunt Blowin'” and “John.” Shirtless, he looked as though he might do well if this thing ended up coming to blows – or if there turned out to be a swimsuit portion. 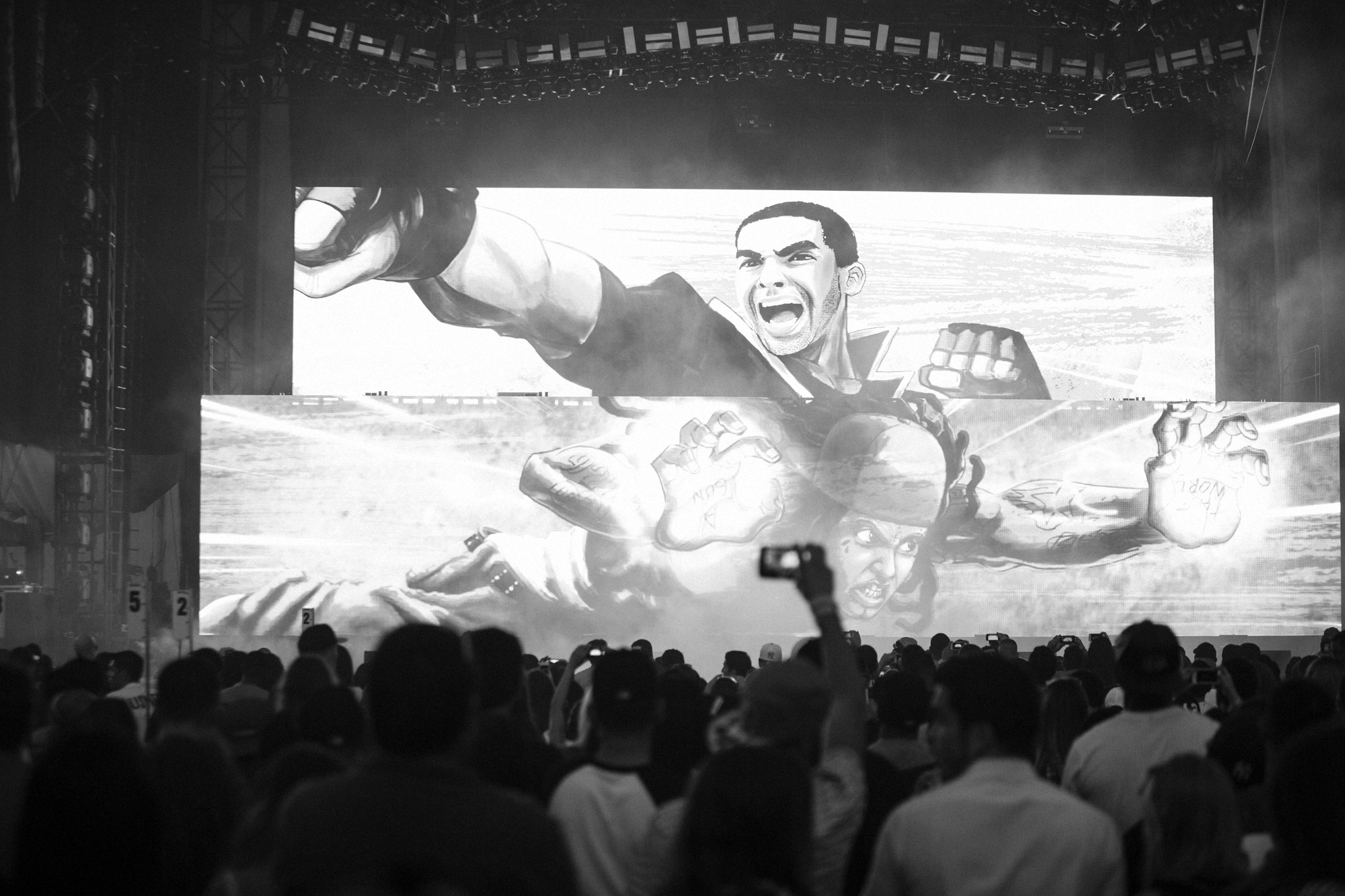 Drake, his torso covered by a “Free Meek Mill” T-shirt, answered with “Draft Day,” “We Made It” and “The Language,” establishing that these rappers were actually going head-to-head. “This is my night,” he told the crowd, claiming sole ownership of the event. “I gotta roast my balls live in New York! You know what the fuck I’m talking about?” Not exactly, but without the app, how could we let him know?

Playing their records the same way that local DJs do, the two rappers would often limit themselves to a hook, a verse and a hook, then move on to the next tune, using the saved time to get on the mic and roast each other’s balls a little. “I been doing my gangsta shit since that little boy was in his wheelchair,” Wayne joked, his easygoing, slightly inebriated stage persona bridging the gap between Dean Martin and The Original Kings of Comedy. Drake, overdosed on confidence, responded by mocking his 31-year-old opponent’s (slightly) advanced age, dropping lines like, “I know his career is longer, but my shit is stronger.”

The back-and-forth slowed when the young challenger strapped onto a zipline and floated over the crowd, singing, as he put it, “for the ladies of New York” and shouting out the ones with whom he made eye contact. This prompted Wayne to respond with the “How to Love,” “Mrs. Officer” and – running out of proper “father-daughter dance”-type hits – the track with the chorus that goes “I wish I could fuck every girl in the world.” Immortality, it seems, can wait. 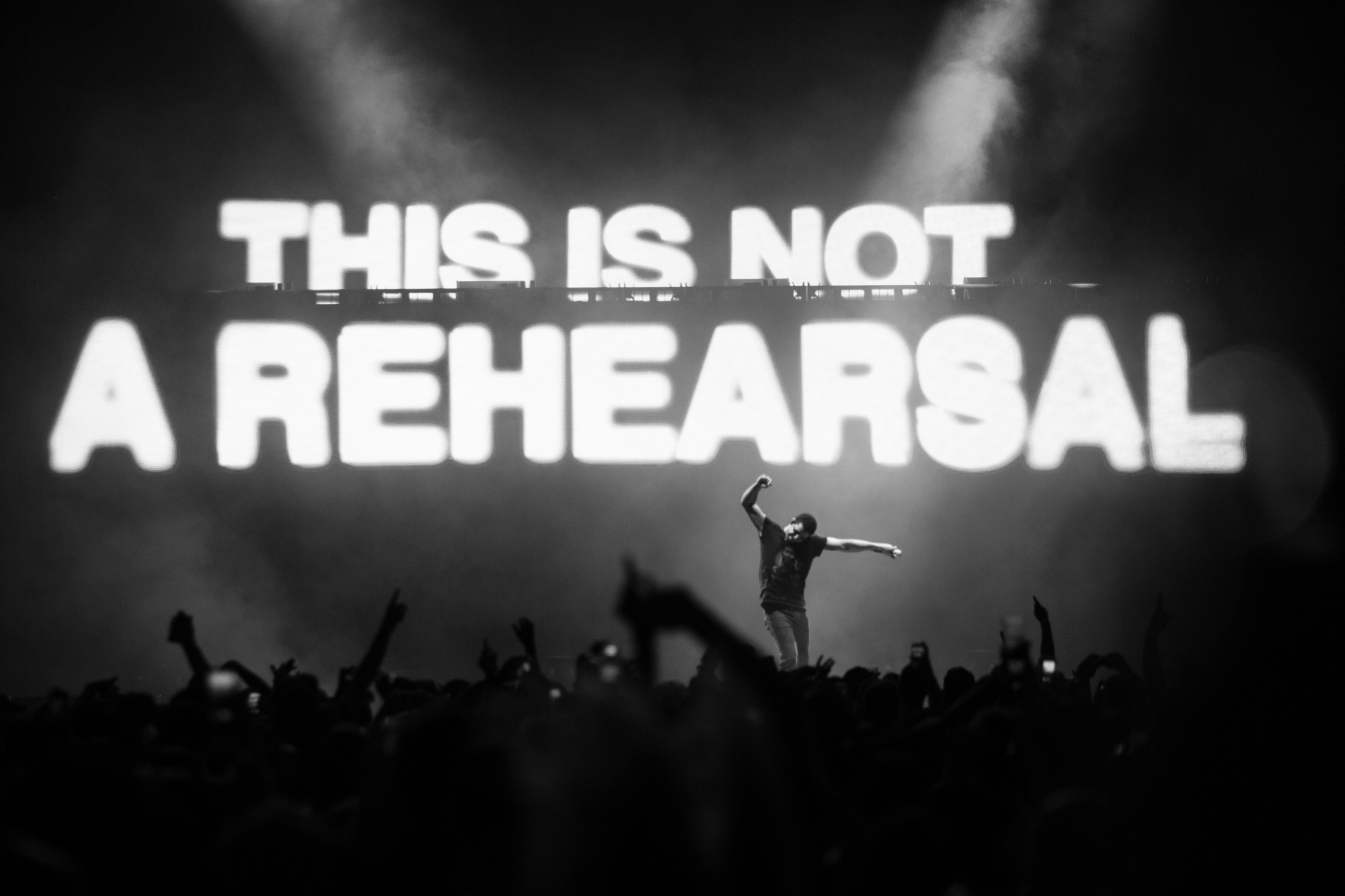 Eventually, however, a hook-singing competition brought the contest back to Wayne’s home turf: Drake held his own with the work he did on 2 Chainz’ “No Lie” and DJ Khaled’s “I’m on One,” but like just about everybody else in popular music, he was unable to match the desperate intensity of Lil Wayne’s “Duffle Bag Boy” chorus.

This meant that – who would have guessed – the contest was just about even as the two performers entered the final round. Each went to opposite sides of the stage, and a comic book cartoon told everyone to use the app to decide who would go first. Pretending that a few people actually did, the jumbotron instructed Lil Wayne to take the stage. He performed “Six Foot Seven Foot” and Drake performed “All Me,” but that was overshadowed by a truce that found the two rappers trading compliments (and also by a looped video of the latter rolling lint off his pants at a Toronto Raptors game). For Wayne, Drake is “the very one reason a nigga like me is still able to come onstage and entertain you.” For Drake, Wayne is, simply “the greatest of all time.”

Another cartoon revealed that, hey, Drake won, but that wasn’t the point: The point was that the duo still hadn’t played their collaborative “HYFR (Hell Ya Fucking Right),” and curfew was approaching. “We in a residential neighborhood,” said the night’s champ, introducing the tune. “Let’s wake everyone up!”