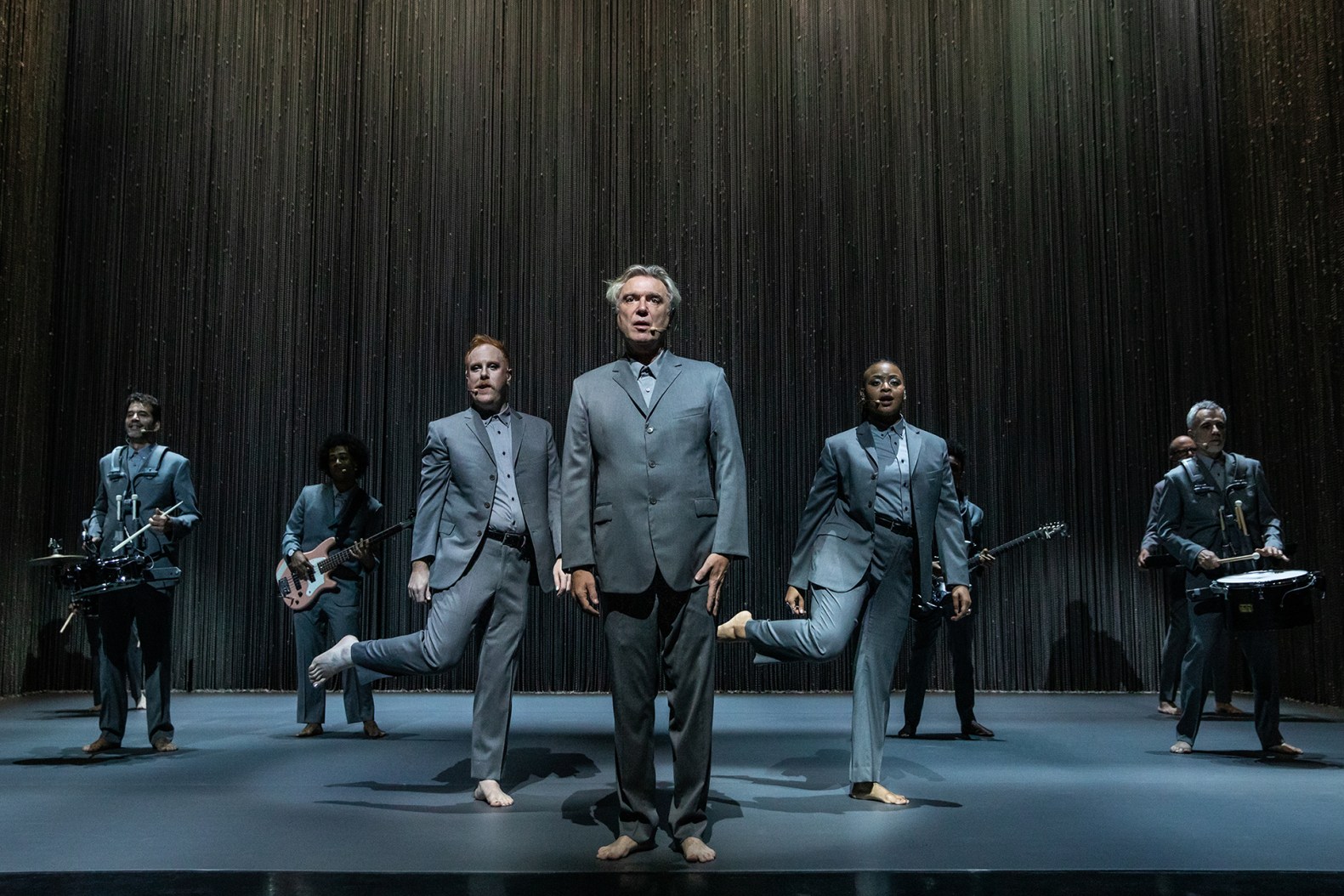 Fans of David Byrne are used to his ability of pinpointing life’s dumb incongruities and elevating them to something that could be either joyfully menacing or pleasurably disorienting. Rather than wearing an ironic mantle of aloofness, Byrne — who led Talking Heads through the 1970s and Eighties, and has followed his own joyously eclectic path as a solo artist since then — has in recent years made it his mission to try to help people find happiness. Earlier this year, he launched his online magazine, Reasons to Be Cheerful, and in many ways American Utopia, his concert-theater-dance installation that’s opened on Broadway (through January 19th), could be seen as art rock group therapy. Combining a back catalog of 20 songs from both Talking Heads and his solo albums along with bits of storytelling and humble advice, it’s Byrne’s secular church offering a tonic for our tumultuous times  — six times a week.

The production opens with a curtain of elegant thin-metal chains slowly rising as Byrne, a spectral figure with white hair lit from above, sits in a chair at a card table, holding a model of a brain. It looks like it could be the set up for a Spalding Gray one-man show, but he begins singing “Here,” from his 2018 album American Utopia: “… Here is a region that continues living / Even when the other sections are removed… Raise your eyes to one who loves you / It is safe right where you are…” He’s soon joined by two singer/dancers in matching gray suits — one red-headed white man (Chris Giarmo), one black woman with long braids (Tendayi Kuumba), both with shiny eye shadow — who accompany their prophet. They then segue into the rollicking “Lazy,” layered with heavy drums and a dance beat that makes it impossible not to bounce along, as they are joined by more members of the band. Everyone is dressed the same in light gray suits, gray button-down shirts; everyone is barefoot. They look like they could be a snazzy cult lost in some other dimension dedicated to minimalism and mechanical movements — all set to a tribal-pop beat.

Byrne has been slyly subverting sloppy rock concert conventions since before the Talking Heads’ Stop Making Sense tour that was captured by director Jonathan Demme for the 1984 film, redefining what we expected from our music idols. Here, he’s worked with choreographer Annie-B Parson to create something that’s slick and surreal, at times quirky and confusing, but ultimately playful, accessible, and full of joy. The bare stage is devoid of platforms or drum kits, so you won’t find any distracting cords as even keyboards are harnessed so that everyone is liberated to move. “We’re untethered,” Byrne explained later. “That’s what this show is about.” And damn, do they move.

At times, the dozen bodies on stage — nine musicians (six of them percussionists) and the two singer/dancers — feel like an ecstatic Mardi Gras marching band in neutral duds, at others they are transformed into a collective circle that’s discovered a primitive ritual that will unlock some hidden cosmic truths. It’s the kind of work that you might find in a church basement in New York’s East Village: wacky, weird, and slightly awkward — not typically on a Broadway stage.

That doesn’t mean all is perfect. Byrne’s interstitial banter can feel awkward and heavy-handed. At times, he tries to show connections between disparate parts of the audience, or compels people to register to vote and have optimism in our democracy. All worthy sentiments, but somehow they feel like timid speed-bumps working against the jubilant music-making. His line, “We’re all immigrants,” when describing himself and members of the band, received a rousing cheer, but it also felt like an easy win for the liberal, middle-aged crowd in attendance. Although his explanation as to how he asked Janelle Monáe’s permission to include her powerful “Hell You Talmbout” protest song — “If it was OK for a white man of a certain age to perform it” — was engrossing, as he explained it was a “requiem for people who were taken” and a song for humanity, urging the crowd to sing-a-long the names of Eric Garner, Trayvon Martin, Sandra Bland, Emmitt Till and others.

While Byrne can seem diffident when trying to reach the audience through soliloquy, it also lends the production a certain charm and authenticity rather than having the hour-and-45-minute show coming across as too-highly choreographed. And he hasn’t lost tinges of irony. While explaining how a school choir he’d worked with had interpreted the newer “Everybody’s Coming to My House” (co-written with Brian Eno) as an inclusive good-time ditty, he performed the anxious track laced with glee. It’s as if Bryne wanted to admit: You may love your neighbor, but you also want them to leave you alone. And for those skeptical that the band could provide such precise playing with rambunctious choreography, Byrne begins the Talking Heads “Born Under Punches” by having individual band members play their parts one by one, a quick lesson in the complexity that they make look so easy — and the immense amount of work keyboardist Karl Mansfield was tasked with due to the lack of any horns.

Watch David Byrne and Miley Cyrus Dance Their Way Into 2023

The fact that the show arrives in the wake of Bruce Springsteen’s triumphant, sold-out run on Broadway and while Madonna continues her Madame X tour at theaters and opera houses across the country can’t be mere coincidence. A generation of artists once tasked with filling arenas is now opting for more intimate, and perhaps satisfying, staged experiences. But while both of those other productions are geared toward internal, personal journeys, Bryne is focused on observing other humans and objects (including bicycles and a bag of chips). Fans looking for the tight, conceptual rock productions of the Talking Heads, may be surprised that classics such as “I Zimbra,” “Blind,” and “Slippery People” are transmuted into more communal, egalitarian moments. But these looser arrangements are mostly successful and seem to be part of his vision of battling back the fear and cynicism of his earlier music for a more hopeful vision.

I imagine that Byrne would enjoy even more interactivity and people connections in his American Utopia. Instead, our butts were stuck in seats, which meant that we followed the conventional rules of a theater and weren’t actually communing with one another as he continued to urge from the stage. In Here Lies Love, the addictive disco poperetta he cowrote with Fat Boy Slim to tell the life story of Imelda Marcos, he and director Alex Timbers (who is credited as a production consultant here) had the audience move and dance and swirl along with the cast as if we were all together in a nightclub. On this night, when Bryne finally did give the crowd permission to get into the groove — before “Burning Down the House,” near the end of the show — it seemed to unleash a collective pent up need. The fans didn’t require much coaxing, as many rushed to fill the aisles and gather near the stage. No longer the dutiful flock witnessing the maestro conduct his pop sermon, it was time to join the party.