Carnegie Hall’s all-star tribute to David Bowie was nearly over when Chewbacca walked onto the stage and hoisted Wayne Coyne onto his sturdy shoulders. The Flaming Lips frontman was wearing what could best be described as a long, flowing white robe that began to light up as he sang the opening notes to “Life on Mars.” It’s a song about a lonely girl with “mousy hair” who finds escape in the movies, so incorporating a Star Wars character into the act made plenty of sense, especially for a group that has been using aliens as backup dancers for years. This particular rendition of “Life on Mars” had a hard time matching the amazing promise of that intro and was a bit flat in places, but there was so much love for Bowie’s music in the room that nobody really seemed to care.

The evening was the brainchild of New York concert promoter Michael Dorf, who has honored the music of icons like Bob Dylan, Prince and Neil Young at spring Carnegie Hall shows for the past 12 years, donating the proceeds to music education. Thursday’s show went on sale just hours after news of David Bowie’s death hit on January 11th, causing tickets to vanish within seconds. The devastating news inspired a flood of big names to join the bill, including Michael Stipe, Pixies, Debbie Harry and Cat Power. Even after a second show was scheduled at Radio City Music Hall for April 1st, tickets began selling on the secondary market for astronomical prices.

Bad vibes were brewing before the show even began, with the Roots pulling out at the last minute after getting into some sort of tussle over the sharing of equipment. “We have patience,” Questlove wrote on Instagram. “But we do NOT have patience for the #Bitchassness. Enjoy your precious equipment.” Yikes. Here’s a tip: When Questlove kindly asks to borrow your drum kit to play at a charity show, you say OK. The Roots’ exit was so last-minute that the set list handed out to the press still had them down for a seven-minute medley of “Aladdin Sane” and “Fame” between 9:27 and 9:34 pm. (Patti Smith also had to bail because she blew out her voice.)

But there were more than enough amazing musicians present to make up for the absence of Smith and the Roots, and longtime Bowie producer Tony Visconti was on hand to lead the house band, which included Spiders From Mars drummer Mick “Woody” Woodmansey. Cyndi Lauper opened the show by belting out “Suffragette City” wearing a bright pink wig. She brought a lot of bombast and energy to the 1972 tune, even if she didn’t quite have all the lyrics down. Laurie Anderson also struggled with the words to “Always Crashing in the Same Car,” though her arrangement on the violin was quite novel. 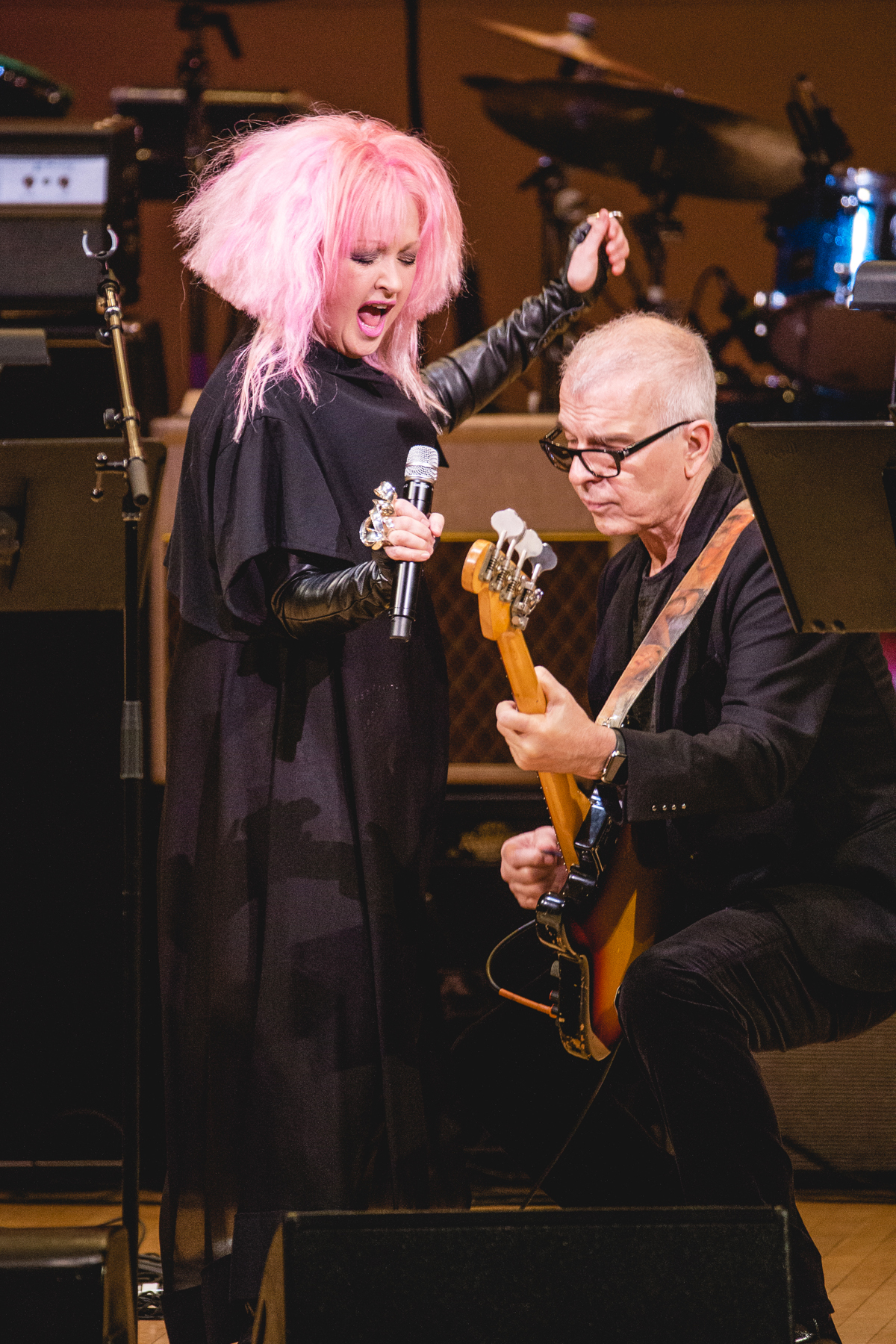 Debbie Harry, wearing a silver boxer’s robe with the hood pulled over her eyes, got the crowd on their feet for a soaring take on “Starman,” and Michael Stipe brought the theater to an awed silence with “Ashes to Ashes,” on which he was joined by Karen Elson and a pianist. Sporting a huge beard and a nose ring, the R.E.M. frontman delivered many of his lines in a hushed, whispered growl. Elson took the complete opposite approach, and the silk/sandpaper mix of their voices was hypnotic, easily one of the best moments of the night. R.E.M. may be gone forever, but Stipe really needs to think about a solo career.

Sean Lennon and Dinosaur Jr.’s J Mascis took an equally innovative approach to the Hunky Dory deep track “Quicksand,” which they reinvented on twin acoustic guitars, kicking it off with a bit of “Andy Warhol.” Mascis’ Eighties alt-rock peers Pixies were the only group of the evening to play their own tune, though “Cactus” is technically part of the Bowie catalog since he covered it on 2002’s Heathen. The quartet banged through the song in quick and dirty fashion, with drummer David Lovering spelling out “B-O-W-I-E” instead of the usual “P-I-X-I-E-S.”

Jakob Dylan also revived one of his old numbers: “Heroes,” which his group the Wallflowers recorded for the Godzilla soundtrack in 1998. But much like that movie, Dylan’s version wasn’t nearly innovative or bold enough to justify its existence. Two decades later, it didn’t come across much better. Much more interesting was Bettye LaVette’s take on “It Ain’t Easy,” a Ron Davies tune she  covered in 1972, the same year it happened to appear on The Rise and Fall of Ziggy Stardust and the Spiders From Mars. LaVette is a brilliant interpreter, and at 70 years old, her voice remains as powerful as ever. She also knows how to make an exit, hitting the last note right as she walked out the stage door.

Joseph Arthur slung a giant American flag on a music stand before playing a feedback-heavy solo version of “The Man Who Sold the World” on electric guitar. When he wrapped, he unfolded the flag to reveal the words “Fuck Trump” written across the stars and stripes. That earned him a big cheer, as did Perry Farrell’s entrance when he walked out in an enormous floppy hat and busted out “Rebel Rebel.” Heart’s Ann Wilson brought that same level of energy and spirit to “Let’s Dance,” which was actually the newest song anybody selected throughout the whole evening. Cat Power took on “Five Years” — maybe the greatest vocal moment in Bowie’s career — and made it her own, though Woodmansey perfectly recreated his drum part from the original recording. Rickie Lee Jones, meanwhile, stripped down “All the Young Dudes” on the acoustic guitar, discovering a bit of unexpected sadness at the core of the anthemic song. 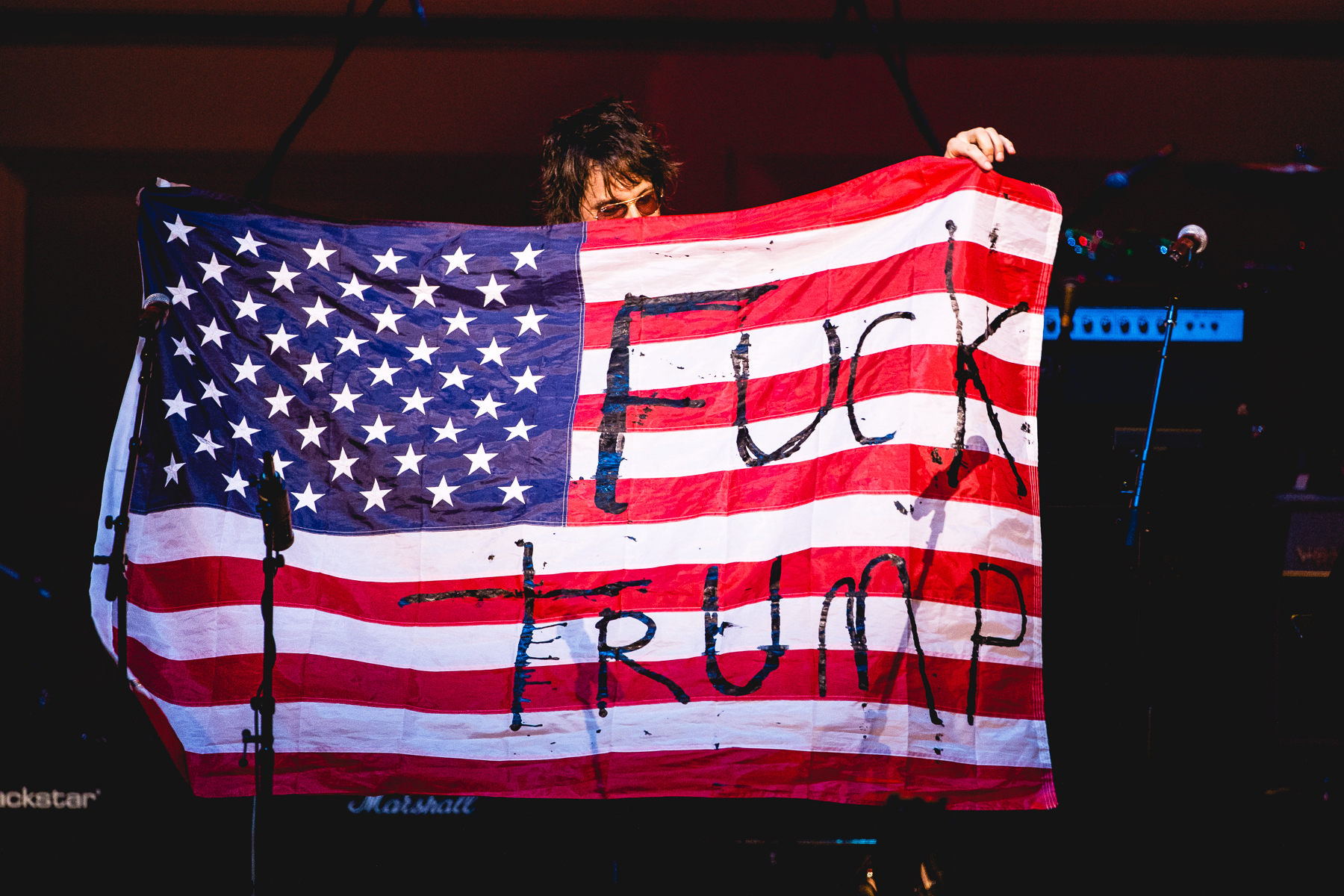 The evening ended with Choir! Choir! Choir! taking the stage along with the New York City’s Children’s Chorus. They told the audience to open their programs to a page that had the lyrics to “Space Oddity” so everyone could sing together. It seemed like most in attendance knew the words by heart, and the sound of 3,000 people singing Bowie’s first hit like it was the National Anthem was hauntingly beautiful.

The song ends with Major Tom floating off into open space, completely untethered to the world. If Bowie is up there somewhere too, let’s hope he got to see all the love that has been pouring out for him during the past few months. And if he could have said one thing, it probably would have been, “For the love of God, share your equipment with the Roots. What is wrong with you people? Also, who is that guy in the Chewbacca suit?”