MADRID — Over a drumroll reminiscent of a march or religious procession, the massive blue velvet curtains came falling down like a waterfall, and the stage at Madrid’s WiZink Center arena on Saturday turned into a dim lit club, complete with small tables, a bartender, a full orchestra and the evening’s master of ceremonies: the Spanish singer, rapper and songwriter C. Tangana, dressed in a double breasted striped suit and dark shades. “Thank you for being part of the most important gig of my fucking life,” he told the 15,000 fans who sold out this hometown stop of his Spain and Latin America tour.

The cinematic experience started with giant screens that announced, in film noir-style font, the title of tonight’s event: “Sin Cantar Ni Afinar 2022.” In his 15-year career, C. Tangana has always been as blunt as he is ambitious: whatever he might lack in singing ability he makes up for in his boundary-pushing.

Pucho, as he is also known, was here to put on much more than a concert: It was a mesmerizing mis-en-scene that bridged Spanish and Latin American traditions, eviscerated notions of high and low art, connected older Spanish musicians to new generations and, especially, showed that early C. Tangana, the rapper, and modern C. Tangana, the master conjurer, can all coexist and evolve under his vision.

The crowd did not care about perfect pitch either: fans roared and shrieked during the two hour performance, singing out loud every single word of the repertoire that centered mostly on 2021’s critical and commercial success El Madrileño. The album was groundbreaking on several fronts: Here was one of Spain’s most successful rappers, choosing instead to sing boleros and flamenco pop and inviting elder statesmen from both sides of the Atlantic like José Feliciano, the Gypsy Kings and Eliades Ochoa, instead of the usual reggaeton and pop stars.

The artistic gamble paid off for Tangana, and in the “Sin Afinar Ni Cantar” tour, he takes this culture-clashing concept even further by turning the live show into a cinematic experience with a narrative arc and cast of characters. The stage and lighting were designed like a movie set, and the rolling cameras favored carefully composed back-lit shots and closeups that are more in line with a music video than a live concert. 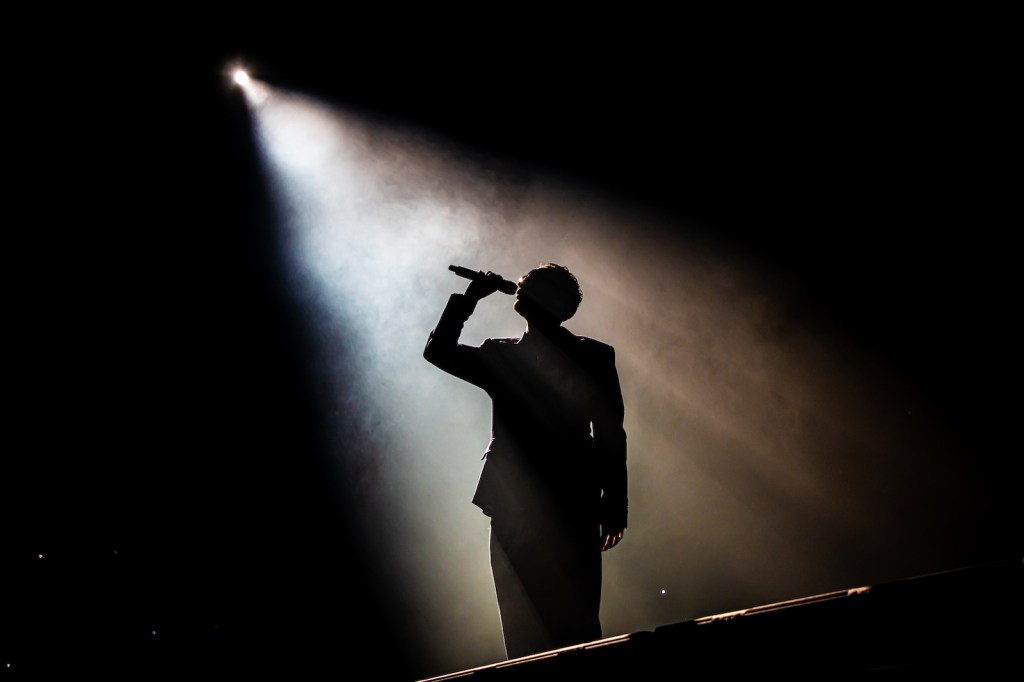 In the first act, Tangana introduced the younger crop of collaborators that also make up El Madrileño: Urban flamenco singer and reality star Omar Montes (for their latest hit “La Culpa”), regional Mexican singers Carin Leon and Adriel Favela (for the corrido-inflicted “Cambia!”) and Rita Payés, the standout young singer and trombonist who exquisitely stood in for Omara Portuondo’s vocal parts in the bolero “Te venero,” no easy feat.

There was bachata with Nathy Peluso (one of the night’s most applauded guests) for their smash “Ateo”, and the recently released “Bobo” (which he recorded with Dominican bachata godfather Luis Segura). True to form, Tangana’s vocals throughout were heavily filtered and autotuned sometimes to an extreme, all to make a point: Here he is without constraints or hang-ups, carefree.

During the rap numbers, he would happily jump and strut his way along the narrow catwalk that placed him close to the thousands of bobbing heads in the crowd who sang along and smiled with him. In between songs, deafening screams of “Pucho! Pucho!” in unison echoing through the entire arena.

For the second act, the club gave way to a post-dinner scene with Tangana sitting down at a table surrounded by more than a dozen musicians with their flamenco guitars and cajones in a reenactment of his NPR Tiny Desk Concert (which at 25 million views, was the series’ most watched clip of 2021).

A good master of ceremonies knows when to yield the floor and let his guests shine, especially when you have these guests. “I’m truly so proud to be sharing this table with the masters,” Tangana said, as he let Antonio Carmona of the flamenco fusion group Ketama lead the way in their duo “Me Maten,” and flamenco rocker pioneer Kiko Veneno in “Los Tontos”, which interpolates New Order’s “Bizarre Love Triangle” (in this live version with vocals by Pablo Drexler, son of Latin Grammy-winning singer songwriter Jorge, who also provided other backup vocals throughout the evening).

Just like any good Spanish “sobremesa” after a long meal over a table of empty bottles of wine and anise, it’s time to get nostalgic, and the cast of characters all joined in an epic sing-along of Veneno’s groundbreaking himn “Volando Voy,” which was first recorded by the flamenco legend Camarón de la Isla in the late 1970s; as well as 80s and 90s favorites such as Ketama’s irreverent “No Estamos Locos”, the late flamenco rebel Ray Heredia’s “Alegría de Vivir” and even Alejandro Sanz’s “Corazón Partío.”

How C. Tangana Is Changing the Game

Throughout, Pucho smiled, taking tequila shots and puffing cigars, visibly enjoying his own party and sometimes not even singing but taking it all in. But it was only a matter of time before the ringmaster jumped back into the spotlight; in this case literally, as Tangana jumped on top of the table to throw some bars of his own in “Tranquilisimo”, and back to the runway for “Llorando en la Limo” and later, “Antes de Morirme,” his 2016 hit with a then-unknown Rosalía. (Curiously absent from the set list was “Mala Mujer”, one of the biggest hits of his career).

For the third act, it was back to the club for the after-hours delirium: paso dobles and rock, bossa nova and trap, and on and on and on. Flamenco vanguardist Niño del Elche and singer Ismael “El Bola” provided world-class flamenco clout in “Muriendo de Envidia” and La Húngara brought the house down with “Tú Me Dejaste de Querer.” No afterparty in the Spanish-speaking world can be complete without merengue music and Tangana dared to do a dragged-out version of the biggest merengue of them all: Elvis Crespo’s “Suavemente.” Everyone on stage and off danced without care.

The euphoria in the arena was that of post-pandemic proportions. It was clear there was no room for “guilty,” just pleasure, in Pucho’s fiesta, which on Saturday was also full Spanish boldface names in attendance: Ursula Corbelló (“Money Heist”), the artist Rosario Flores, the TV presenter and tabloid magazine staple Vicky Martínez Berrocal, musician Dani Macaco, among dozens others.

For the finale, Tangana popped open a bottle of bubbly and was triumphantly carried on the shoulders of his colleagues down the runway like a grinning matador. “Fin” appeared on the screens, and the credits rolled including every musician, technician and cast member involved in the production. The chants of “Pucho! Pucho!,” however, continued to reverberate well after everyone had left the stage.