At last night’s Stand Up for Heroes benefit in New York, Jon Stewart knew what everyone was thinking as soon as he took the stage. Dressed in a super-casual-Friday T-shirt and jacket, Stewart sported his newly trimmed white beard and cracked, “I didn’t know Jon Stewart’s grandfather was here.” He added, with a mordant joke, “I’m as old as shit!”

Veterans Day comes with many traditions — parades and commemorations for those who’ve served and defended the country — and Stand Up for Heroes, held the night before Veterans Day this year, is among the most solemn and entertaining. Presented by the New York Comedy Festival and the Bob Woodruff Foundation, the annual event raises funds to assist injured service members and their families. Now in its ninth year, the three-hour event, held at the Theater at Madison Square Garden, has its own particular traditions, all on display last night: deeply felt tributes to the servicemen in the audience, irreverent and often ribald humor from the participating comedians and a mini-set of songs by Bruce Springsteen — who also adhered to his own tradition of telling a few delightfully dirty jokes.

Racy humor — with a bit of politics — was the recurring theme of the night. After thanking the crowd for sparing him having to watch the Republican debate taking place at the same time, Seth Meyers demonstrated he can be as comfortable doing standup as sitting behind a desk. He riffed on barroom fights, his marriage and even his wife’s food poisoning on their wedding day. One of the downsides, had she died? “You’re going to be a suspect.” 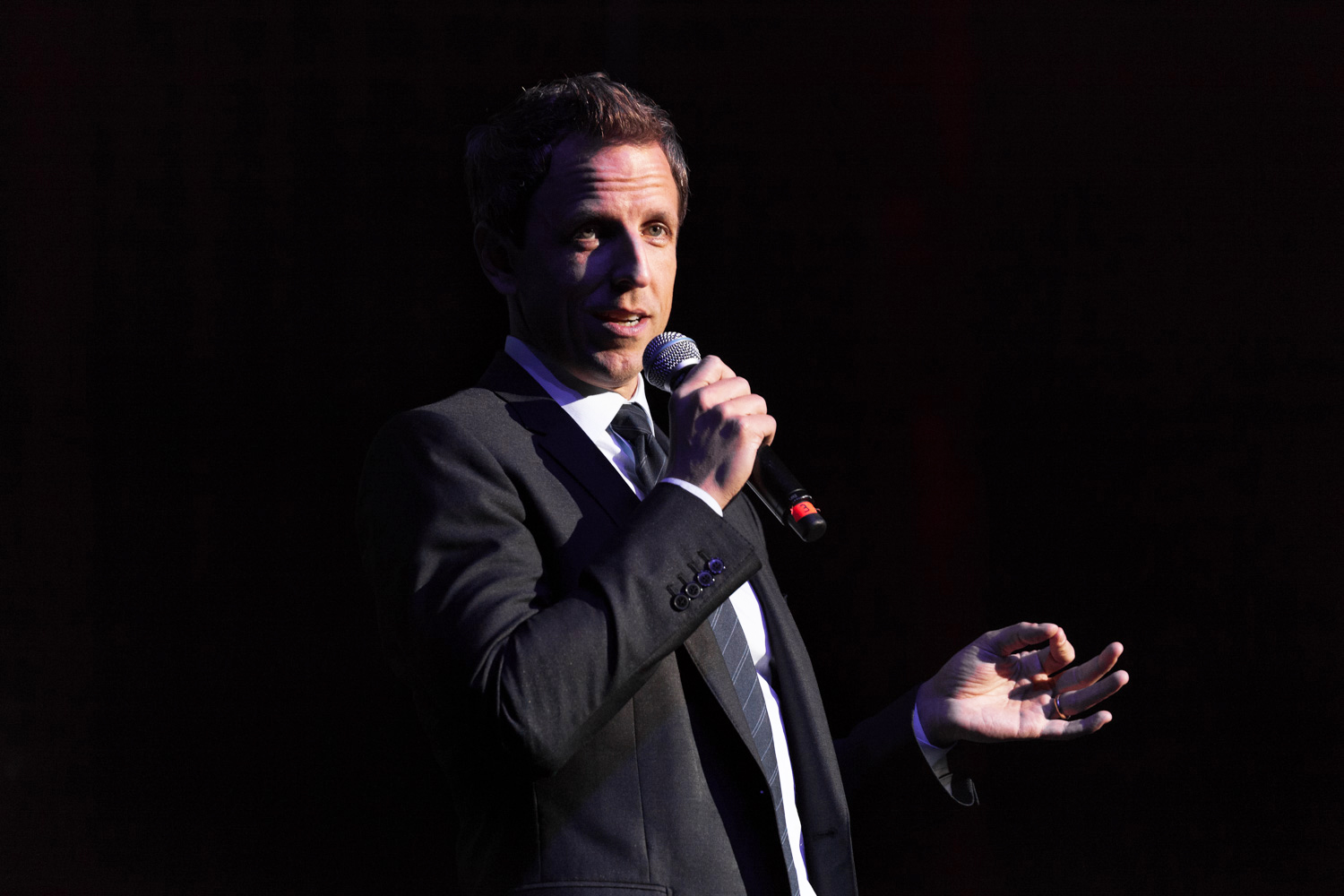 Like Stewart, Ray Romano sported a beard and joked about what it symbolized — that he was working on a project about “a guy who just doesn’t care anymore.” The crowd whooped it up over his riffs on life in his fifties — more doctor friends and fewer friends like the ones you have in your twenties who can get tickets to anything, like an REO Speedwagon concert. (“Thirty years ago, that was a hot ticket,” Romano cracked.) Mentioning his role in the upcoming HBO series Vinyl, about the music business in the Seventies, he joked about the difference between “sitcom sex and HBO sex” and explained he had to kill a spider in his shower recently because the bug had seen him masturbating: “He wasn’t going to say anything, but why take the chance?”

Jokes like that set the tone for the rest of the no-digs-held-back wisecracks that threaded through the evening. John Oliver described a recent vacation in Australia, complete with “comfortably racist” locals who relentlessly slagged Lebanese. (“Who the fuck has a problem with the Lebanese people?” Oliver brayed). Yet it was Stewart’s routine, the last of the evening before Springsteen’s set, that was the most anticipated in light of his departure from The Daily Show. After a few references to his semi-retirement and how rabbinical he looks, Stewart ambled back into the political arena, calling Trump “easily mockable” and comparing him to a summer-camper who has to put his name on everything he owns. Stewart mocked the “he says what he thinks” rationale behind Trump’s popularity (“Why is that a virtue?”) and dripped sarcasm when commenting on how “presidential” Trump’s tweets are (Stewart imagined Lincoln tweeting, “Emancipate this, fucker!”). 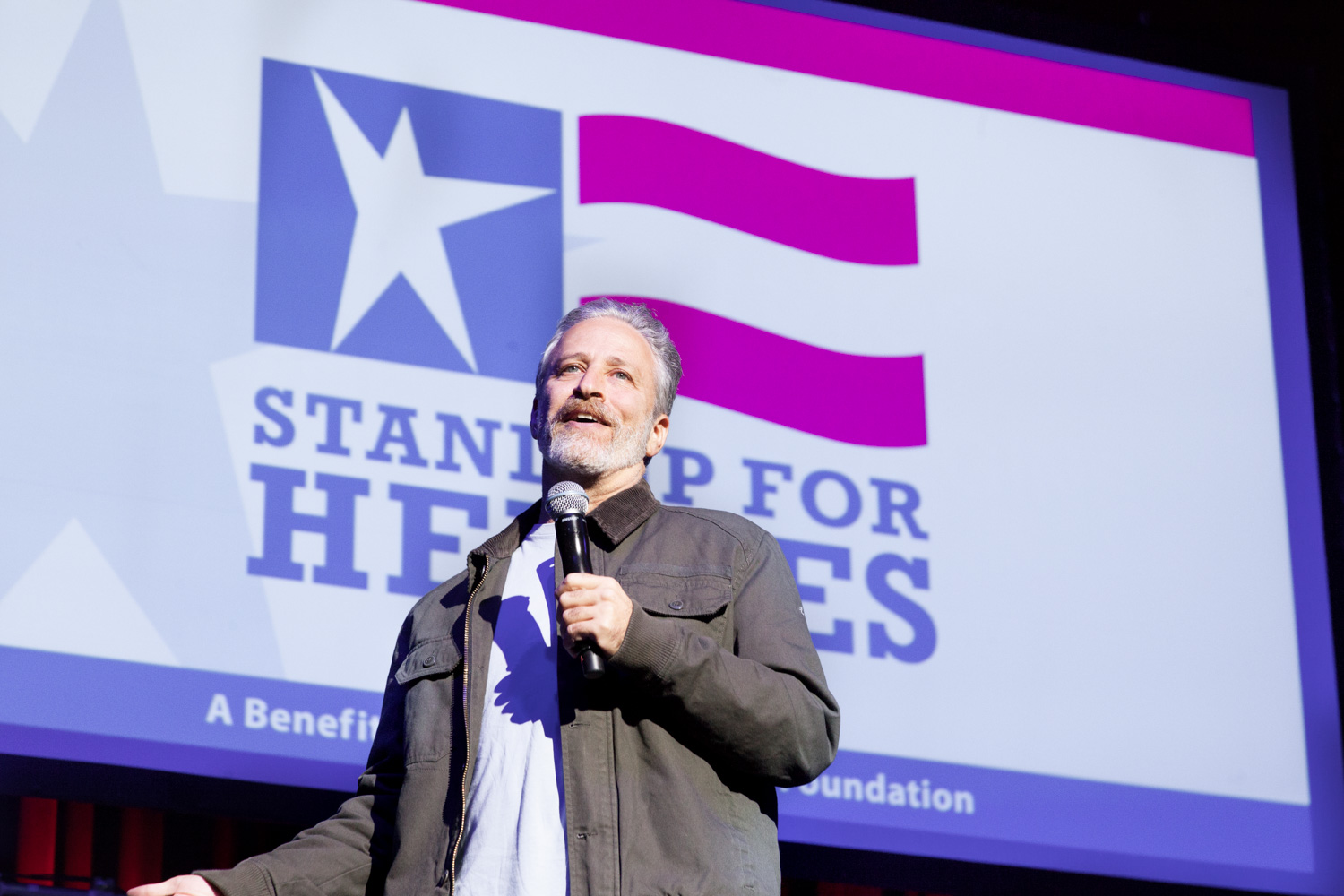 After being introduced by Stewart as the “prince of New Jersey,” Springsteen, performing solo and acoustic, played a slowed-down “For You” that never sounded more resonant, then rolled into three Born in the U.S.A. classics: “Darlington County” (complete with whistle solo), a whooping “Working on the Highway” and a midtempo, meditative “Dancing in the Dark.” In between, Springsteen, to the anticipation of the crowd, told a few proudly smutty jokes, including one about a man who gives his easily aroused wife a “Voodoo Penis” vibrator and another about a struggling entertainer named “Penis Van Lesbian” who takes an agent’s advice and changes his name — to “Dick Van Dyke.” “These are musician jokes,” Springsteen cracked after one of them. “I didn’t say they were good.”

Springsteen also helped the Bob Woodruff Foundation with its biggest haul of the night: auctioning off an autographed Fender Strat along with tickets and backstage passes to the next E Street Band show. Two people in the audience each bid $370,000 for their own guitars and tickets, adding up to $740,000. Springsteen was also at the heart of the evening’s most amusing sight gag: He rode out onto the stage on a Harley-Davidson also being auctioned. With Meyers contributing four tickets to the taping of Late Night — and Romano adding in the hand sanitizer in his jacket — the Harley went for $100,000. (Overall, this year’s event was the most successful Stand Up for Heroes ever, pulling in a total of $6,126,711.) For all the jokes, though, everyone knew why they were there. Addressing the servicemen and women in the front rows during his set, Stewart added, poignantly, “You guys make me remember that we can be better.”