It was a night of a few thrills and one show-stealing spill at the BRIT Awards in London. Ed Sheeran (British Male Solo Artist, Mastercard British Album of the Year) and Sam Smith (BRITs Global Success Award, British Breakthrough Act) confirmed their rising-star status, picking up two trophies each at the O2 Arena. But it was the night’s falling star – Madonna, who dramatically crashed down a flight of steps during her performance – that ended up grabbing the headlines.

Madonna later said on Instagram that she was “fine.” Otherwise, it was an atypically slick show genially hosted by TV personalities Anthony McPartlin and Declan Donnelly and heavy on genuine global stars, with performers including Taylor Swift and Kanye West. Here are the five key moments:

1. Kanye West Gets Fired Up
As his wife Kim Kardashian introduced him, Kanye was stomped around the stage demanding that the seated music biz execs in the front rows get to their feet. Unusually, many of them obliged – only to be rewarded with a grime-inflected performance of new song “All Day,” featuring dozens of extras, several guest rappers and a couple of flamethrowers that seemed to run out of juice halfway through. British social media users simply flamed Kanye instead, but regardless of their chatter, it remained the night’s most exciting moment.

2. Madonna Takes a Tumble
Madge’s return to the BRITs stage after a two decade-long absence seemed to be going smoothly. The song was “Living for Love,” the look sexed-up demonic bullfighter, the “vibe” a Spanish True Blood end-of-season finale. But then, in a seemingly choreographed move that went wrong, a dancer tugged at her cape, the cape failed to detach and Madonna fell down a flight of stairs live on the Internet. Lesser stars might have stayed down, but Madonna just about styled it out – though her dance moves proceeded a little more gingerly thereafter. As might her backing dancer after the surely spectacular backstage debrief. You mess with the bull, you get the horns. 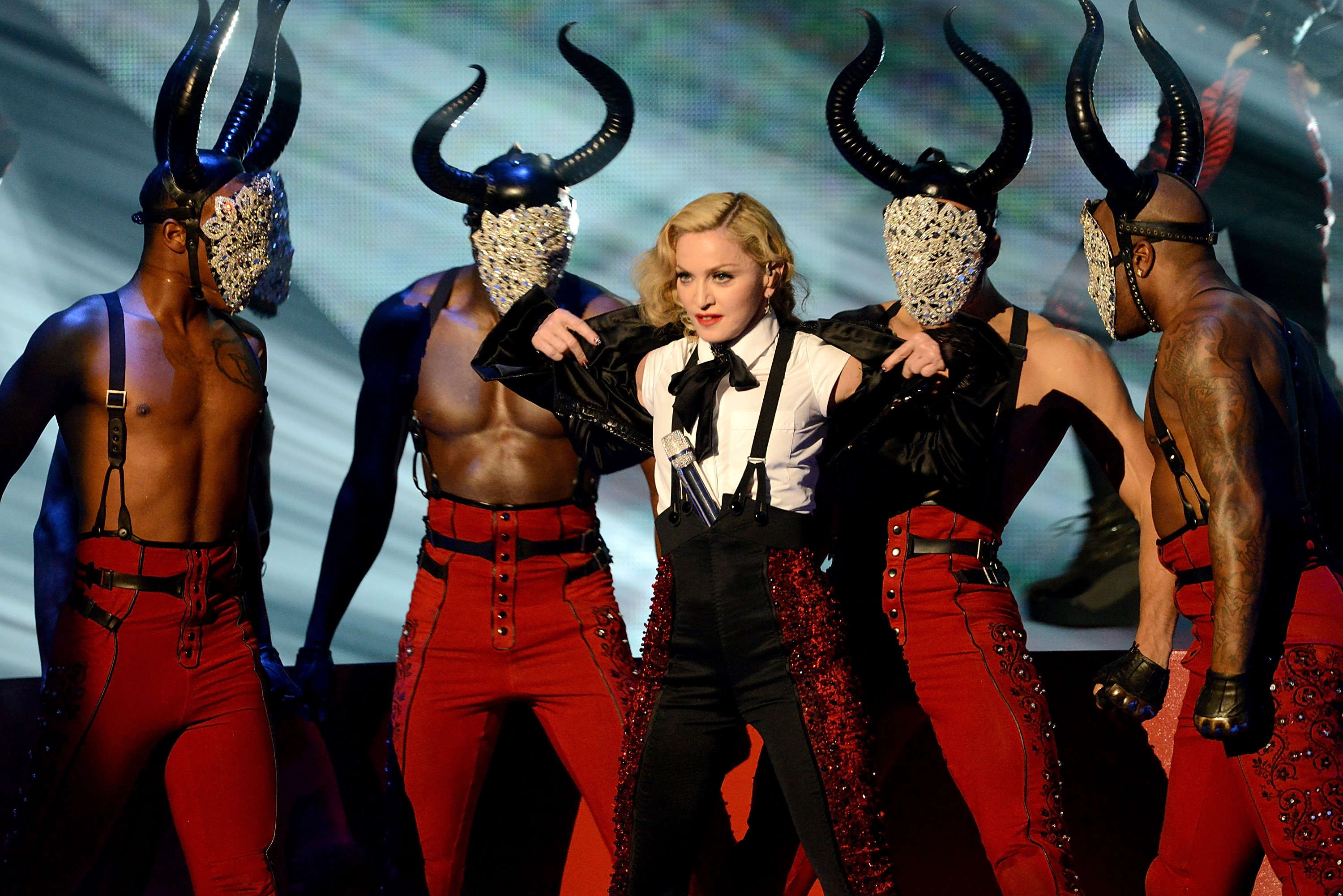 3. Royal Blood Get Crowned
Last year, Arctic Monkeys frontman Alex Turner banged on, at some length, about bringing rock & roll back to the BRITs. This year, Royal Blood actually did it, receiving the British Group award from Led Zeppelin’s Jimmy Page. “It’s a huge surprise to us,” frontman Mike Kerr told the crowd. “And probably more of a surprise for people here, as you might not know who we are.” After a stripped back but still brutally effective performance of “Figure It Out,” however, the band is surely well on its way to becoming a household name.

4. The Return of Taylor Swift’s Surprised Face
Her stunned expression during Kanye’s performance seemed to speak for the nation, and her brilliant opening performance, seemingly channeling Cabaret through “Blank Space,” confirmed her current Queen of Pop status. Meanwhile, her International Female Solo Artist win – surprisingly, her first-ever BRIT Award – saw her back on familiar “I can’t believe this, you guys” acceptance speech territory. “I’ve been coming to England and playing shows for eight years so I’m so happy,” she enthused, before adding, “I wouldn’t be up here if it wasn’t for one of my best friends who took me to pubs and showed me how to make a nice cup of tea – I love you Ed Sheeran!” Bless.

5. British Music Is Back
The U.S. contingent might have brought the stardust, but the night proved that the locals are good for more than taking visiting Americans down the pub. Confident performances from Sheeran (battering his guitar like a drum kit on a loop pedal-enhanced “Bloodstream”), Smith (crooning “Lay Me Down” in front of a white-clad string section) and up-and-comer George Ezra (strumming through “Budapest” in front of an Elvis-style illuminated giant Ezra sign) might not have been very edgy, but they did show there’s no shortage of genuine British global success stories right now. Maybe one day a Brit will even be allowed to close the show.