Bob Dylan sang no songs at last night’s MusiCares “Person of the Year” tribute dinner. Following performances by the likes of Bruce Springsteen and Jack White, Dylan instead delivered a half-hour speech on his wandering career, smiling and leaning on a podium to poke fun at his critics and praise his musical heroes.

Upon being handed a trophy by former President Jimmy Carter, he immediately thanked a list of friends and supporters, beginning with the legendary Columbia Records talent scout and producer John Hammond. He also thanked the many interpreters of his songs, from Peter, Paul & Mary to Jimi Hendrix. “I wasn’t a pop songwriter,” Dylan said, discussing how artists like the Byrds, Turtles and Sonny & Cher first turned his songs into Top 40 hits. “I really didn’t want to be that, but it was good that it happened. Their versions of songs were like commercials, but I didn’t really mind that – because 50 years later, my songs were being used for commercials. So that was good too.”

Dylan said he took special pride when his personal heroes sang his tunes, and he singled out acts like the Staples Singers, Nina Simone (“an overwhelming artist”) and Johnny Cash (“a giant of a man”). But he noted that his acclaimed work as a lyricist was part of an ongoing tradition and that he’d learned to write from obsessively listening to folk songs: “They gave me the code,” he said. “For three or four years, maybe all I listened to were folk singers. I went to sleep singing folk songs. I sang them everywhere. If you sang ‘John Henry’ as many times as me… you would have written ‘How many roads must a man walk down’ too.”

The rest of the night was filled with vivid interpretations of his songs from generations of performers. In a sparkling jacket covered in stars, Beck opened the music portion of the night with a bristling, blues explosion of “Leopard-Skin Pill-Box Hat.” Later, Bruce Springsteen and Tom Morello (carrying a guitar featuring the phrase “Arm the homeless”) performed a “Knockin’ on Heaven’s Door” that erupted with fiery electric guitars. 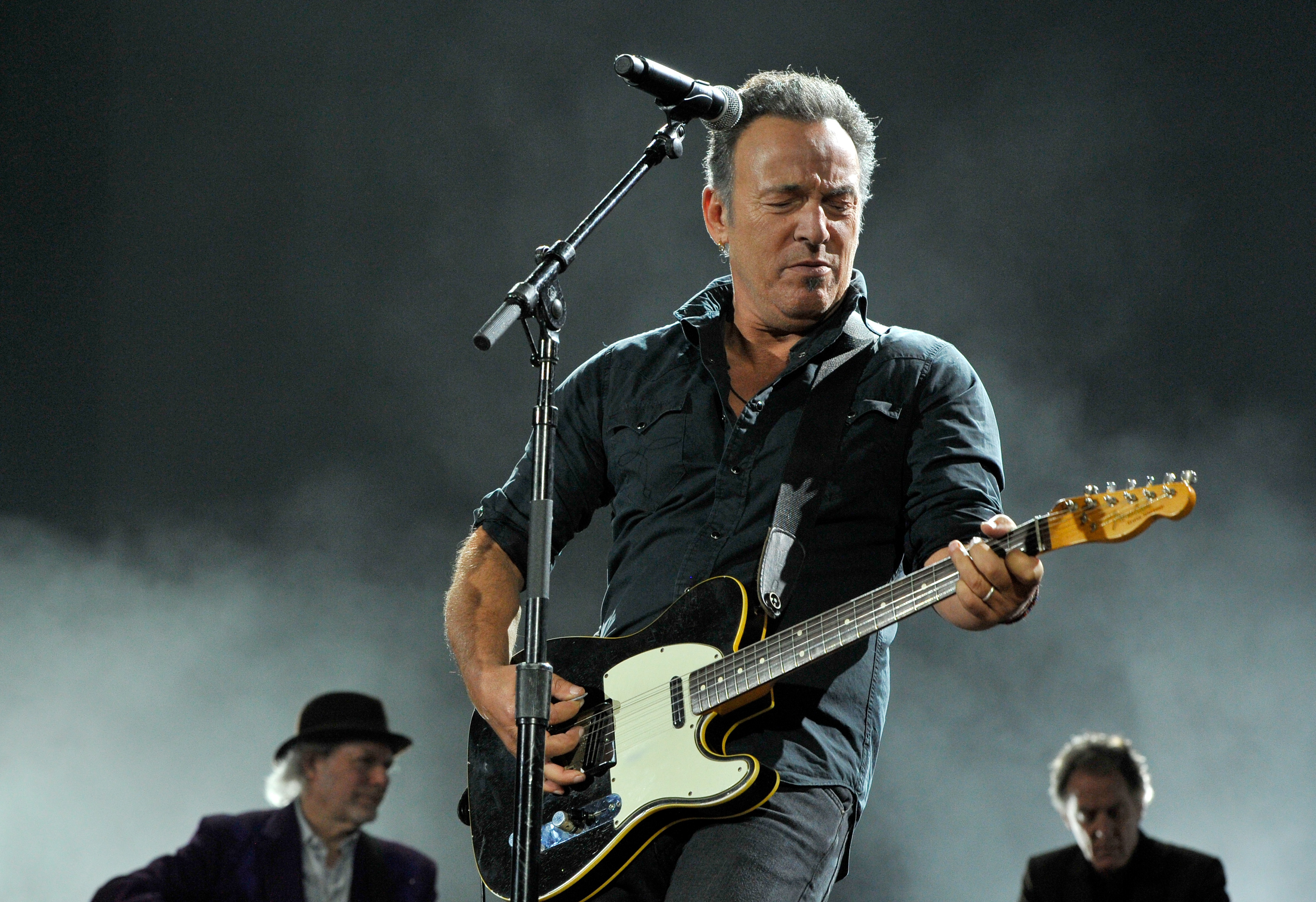 Flanked by guitarists who sang harmony, a pompadoured Jack White led a snarling “One More Cup of Coffee (Valley Below),” unleashing a wild, explosive electric-guitar solo. John Mellencamp provided another startling highlight, growling like Tom Waits through “Highway 61 Revisited” in a reading that was less playful than weathered with regret.

The dinner marked the 25th anniversary of MusiCares, which has so far given $40 million in direct financial assistance to musicians in need. Its first standing ovation came when Tom Jones delivered a regal, torrid “What Good Am I?” “That’s a beautiful song,” he said after. “I love that song.”

A glitchy teleprompter delayed Willie Nelson’s vocal on “Señor (Tales of Yankee Power),” but as technicians scrambled, the band played on and on with elegance and bite. Nelson then sang the provocative “a wicked wind still blowin'” line like it was his own.

There was molten blues guitar from Derek Trucks and Susan Tedeschi on “Million Miles” and a delicate acoustic “Girl From the North Country” from Crosby, Stills and Nash. Bonnie Raitt was introduced by David Crosby as “my favorite singer in the world,” and she performed “Standing it the Doorway” with emotional slide guitar.

A tape-delayed Garth Brooks performed “Make You Feel My Love” from a concert stage in Pittsburgh, and there were video testimonials from Paul McCartney, director Martin Scorsese and actors Jeff Bridges and Josh Brolin. Also on the big screens of the Los Angeles Convention Center was vintage video of Lou Reed roaring through “Foot of Pride.”

On the red carpet, David Crosby noted that Dylan’s huge impact was first felt on his own generation of folk singers and rock performers. “When we put ‘Tambourine Man’ on the air, that was the first time anybody put good poetry on radio ever,” Crosby said. “He changed the world. He put content up there as important. Before Bob, words didn’t count.”

Tom Morello, meanwhile, told Rolling Stone that he didn’t discover Dylan until his late-twenties, when he first heard a cassette of The Times They Are a-Changin’. He was soon listening to it more than his Clash records. “That was revelatory for me,” Morello said. “There was a poetic voice, true and deep, that not only ignited a generation when it came out, but it resonates through the generations. It was very impactful.”

The night ended with Neil Young on acoustic guitar and harmonica, howling a forlorn “Blowin’ in the Wind.” Over 50 years ago, the song’s questioning of peace and justice first immortalized Dylan’s career. As this MusiCares tribute once again proved, it also set a path that many of the greatest artists in music would eventually follow.