One thing’s for sure: Björk‘s world concert debut of Vulnicura, her gorgeously riven song cycle about the death of her relationship with artist Matthew Barney, was no funeral. Staged at Carnegie Hall at high noon, it was a remarkably intimate show – many in the crowd had doubtless just rolled out of bed – gathering a fanbase whose diva devotion recalls that of Judy Garland, who staged a legendary show of her own in the same room. It was an assertion of artistic mastery and homegirl realness, capping a remarkably Björk-ful week that included the opening of her ballyhooed retrospective at the Museum of Modern Art just five blocks away – a playful send-up of museum convention that sent art critics into paroxysms while the rest of us vibed on the video rooms.

Bjork on Feeling Like an Alien, Child Stardom in Iceland and 'Vulnicura'

Björk strode onto the Carnegie stage in a floor-length white dress that conjured a deconstructed wedding gown, with white platform shoes and that weird icicle-veil headress. Amazingly, she could sing through the thing; at one point you could see her wiping sweat (or tears, or both) off her face beneath it. Backing her, also in white, were 15 members of the New York avant-garde ensemble Alarm Will Sound – evenly divided between violins, violas and cellos – with percussionist Manu Delago playing his magical steeldrum-like Hangs and Venezuelan producer Arca dropping beats and other electronic disruptions. The first set presented Vulnicura‘s first six songs, which chart the arc of a breakup. “Show me emotional respect,” she sang on “Stonemilker,” more a demand than a plea, in an avant-pop echo of Aretha’s signature. With Arca’s spasmodic bursts rumbling under the strings’ dark motifs, this was hardly dance-in-the-aisles EDM. But the grooves were palpable even in the beat-less arrangements and Björk moved to them – hesitantly at first, and as the set progressed, with uncontainable spirit. 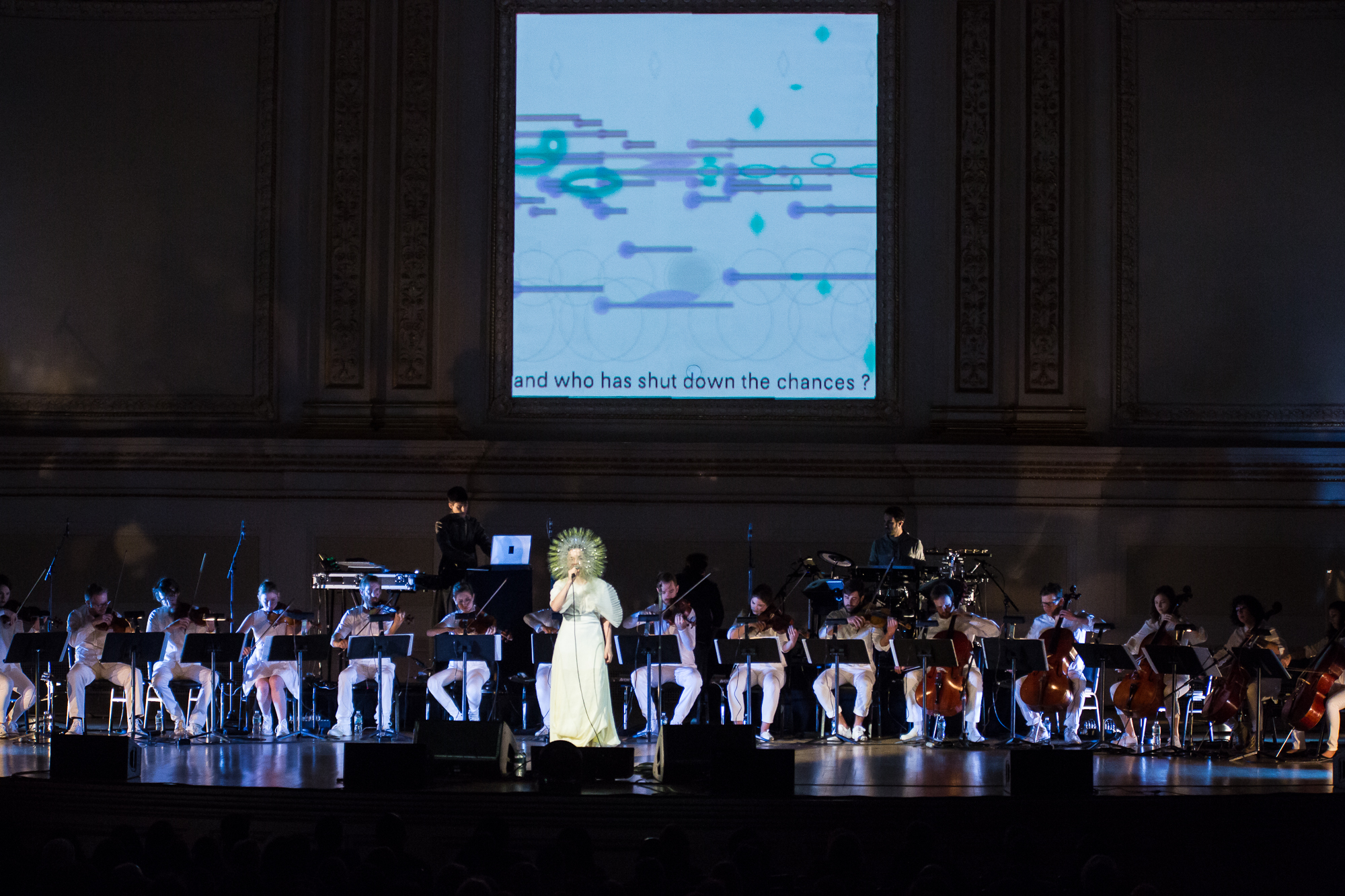 At one point in the the painfully intimate “History of Touches,” the overhead projections – animated abstract musical notations with opera-style lyric surtitles that recalled the impressive Biophilia app – slipped out of sync, and the song threatened to run off the rails; it was hard to tell during a wordless bit if the singer was improvising to cover the technical glitch or having an emotional seizure. But the drama was refocused for “Black Lake,” the album’s great aria and emotional peak. Björk defeated the song’s hopelessness in the very act of voicing it, emblematic of how much potency Vulnicura has as performance vehicle. “There is a swarm of sound around our heads…. It will relieve us from the pain” she sang on the follow-up, “Family,” hurling her indomitable growls up to the cheap seats. During a remarkable moment in “Notget,” the rhythmically frantic set closer, you could see a red-lipsticked grin peeking out from Björk’s crown of thorns, as she waved her arms and bounced on her platforms. This was mourning as empowerment, pain as an engine of joy.

Björk ditched the headress for the second set, slipped into a slinky mauve number, and let down her hair, working through back catalog that connected to Vulnicura‘s themes of struggle and healing. “Women like us, we strengthen,” she sang on Medúlla‘s “Pleasure Is All Mine.” In “Come to Me,” she implored someone to “destroy all that is keeping you down” and promised “I’ll take care of you,” while erotic footage of writhing slugs were projected overhead. Excellent – a reassuring glimpse of the old Björk; our girl was going to be all right. She ended the set with Vulnicura‘s “Mouth Mantra,” dancing with herself while Arca coaxed out stuttering ion storm beats. When she bellowed the line “I am not hurt,” arms triumphantly outstretched, the crowd cheered like she was Joan of Arc rising from the ashes.