Let’s start with the good news. As expected, Billy Joel was the best possible choice to open up a newly renovated Nassau Veteran’s Memorial Coliseum after a $260 million update that kept the Long Island arena closed for nearly two years. It would be hard to top his farewell party to the old Nassau Coliseum in August of 2015, but his 31-song set on Wednesday, packed with hits, deep cuts and guest appearances from Joan Jett, Kevin James and Leah Remini (you read that right), managed to pull it off. The 67-year-old singer sounded ageless from the opening notes of “Miami 2017 (Seen the Lights Go out on Broadway)” all the way to the finale of “You May Be Right” nearly three sweaty hours later.

Now the bad news. There were more than a few problems with the new arena, though hopefully most of them have to do with opening-night jitters. The team in charge of the renovation did a stellar job with the exterior, transforming the drab building into something sparkling and modern, and the venue’s new parking system cuts the drive from freeway to lot down to a mere 15 minutes. For a precious few seconds it seemed like everything would be different at the new Nassau Coliseum, until the security line came into view at the entrances. It must have been at least 80 people deep at every door, moving painfully slowly.

Once you finally enter it becomes instantly clear that the concourses are still far too narrow. Getting around feels like squeezing through a crowded subway car during rush hour. There are plenty of new concession stands; the only problem is the lines were so ludicrously long at every single one of them the people in the back probably didn’t make their seats until “Piano Man.” The lines for beer, T-shirts, food and the bathrooms all ran into each other, making it hard to tell where one began and another began. For lack of a better term, it was a complete shit show. 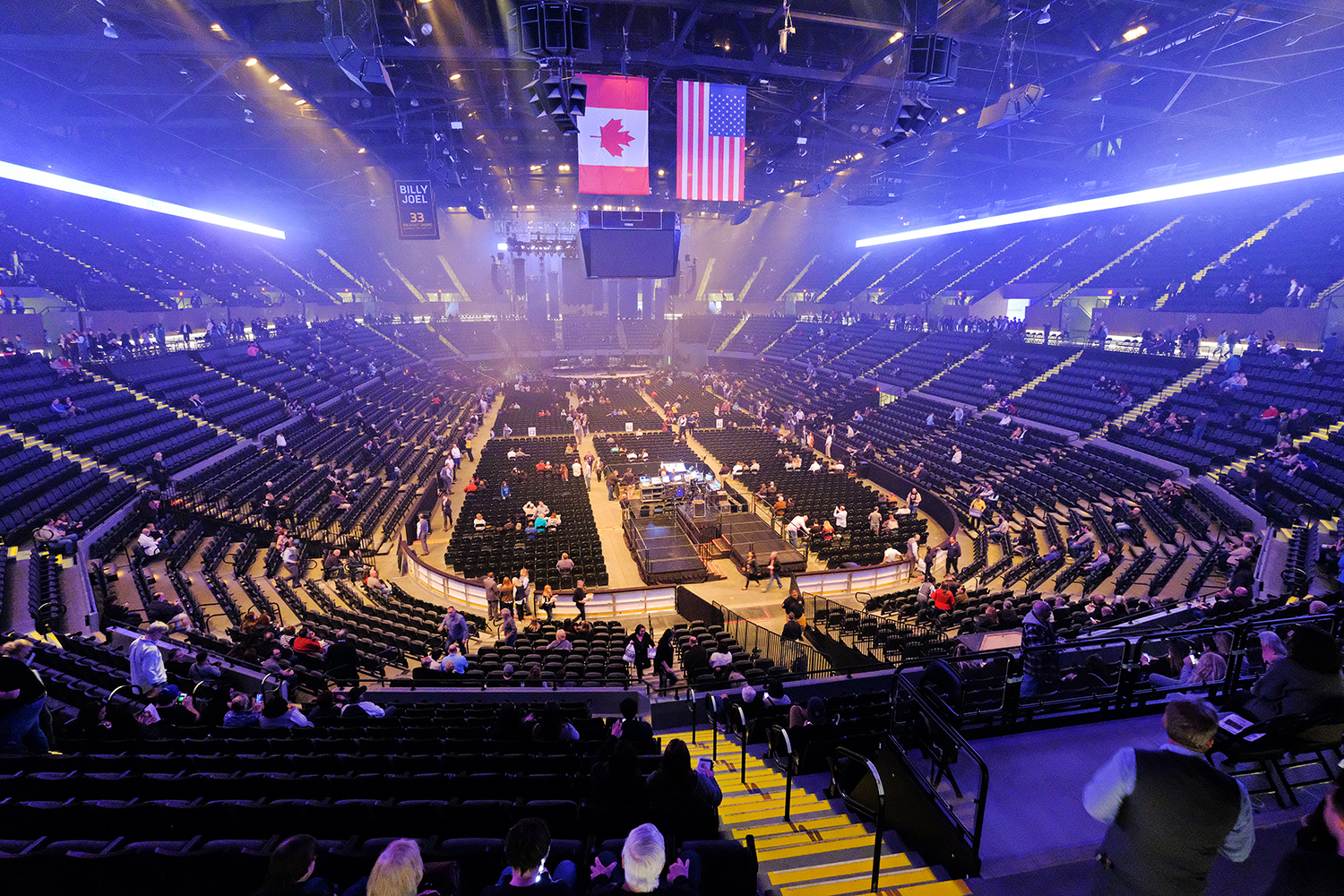 With 15 minutes until showtime and an empty stomach, this writer found a tiny stand labelled “Fan Favorites” that sold nothing but bottled water, popcorn and hot dogs with a line that seemed reasonable. It turned out that this was because they were out of popcorn and water, with a supply of hot dogs dangerously close to vanishing. We managed to snag two of the last ones, and then had to travel to the other side of a bustling entranceway and squeeze past a dense beer line just to get some ketchup.

But once the lights dimmed and Joel and his band took the stage to the theme from The Natural, the hassles were largely forgotten. After all, nobody goes to an arena concert for a great meal or to escape from enormous crowds. And to the credit of the arena, some of the $260 million clearly went towards making the place sound a lot better than the old one, something Joel pointed out very early on in the evening. “This place sounds a lot better than the old coliseum,” he said. “It’s got a little more ambience in it. This is cool. Sounds good.”

He then let the audience decide whether or not he’d play his 1977 hit “Just the Way You Are” or the album cut “Vienna.” “Vienna” won in a landslide. In Long Island, there really is no such thing as a Billy Joel rarity. The place showed as much euphoria at the prospect of hearing “Sleeping With the Television On,” “Sometimes a Fantasy” and “The Entertainer” as they did for “My Life” and “The River of Dreams.” There was also no shortage of songs about Long Island, including “No Man’s Land” (the greatest song in rock history that references Amy Fisher), “The Downeaster Alexa” (“I took on diesel back in Montauk yesterday …”) and, of course, “Scenes From an Italian Restaurant,” which is basically the official song of the island. They should sing it at all sports games right after the National Anthem.

Paul Simon was the surprise guest at the 2015 farewell gig to the old arena, but this time around Joel went for his fellow Long Island Hall of Famer Joan Jett. She came out midway through and blasted through “I Hate Myself for Loving You” and “I Love Rock ‘n’ Roll.” A little earlier in the night there was an unexpected King of Queens reunion when Kevin James and Leah Remini performed an interpretive dance to “She’s Got a Way” that culminated with Remini leaving James for another man. By the end, James was dancing with an enormous sandwich that looked pretty tasty to this hungry reporter.

In an interview with Rolling Stone last week, Brett Yormark, the Chief Executive Officer of Brooklyn Sports and Entertainment, which operates the Nassau Coliseum, said that Joel was their only choice to serve as the debut act of the renovated arena. “When we knew we were going to get the coliseum and reinvent it one of the first calls I made was to Dennis Arfa, Billy Joel’s longtime agent,” he said. “He and I talked about partnering on the close and the open. It was no different than what we did with Jay Z in Brooklyn when he did eight sellout shows. There was no second choice. The only choice was Billy Joel.”

In the coming months the venue will host an impressive slate of shows, including Metallica (in one of their only non-stadium gigs of their upcoming tour), Stevie Nicks with the Pretenders, Roger Waters, the Weeknd and Barbra Streisand. Some of those acts are also playing the Barclays Center in Brooklyn (just 27 miles away), but both venues are now under the same umbrella and will be working together. “When we did our research we realized that even in the first two years of Barclays Center very few people were coming from Long Island,” says Yormark. “We realized that it was a separate and distinct market. … We can create a lot of synergies between the two buildings.” 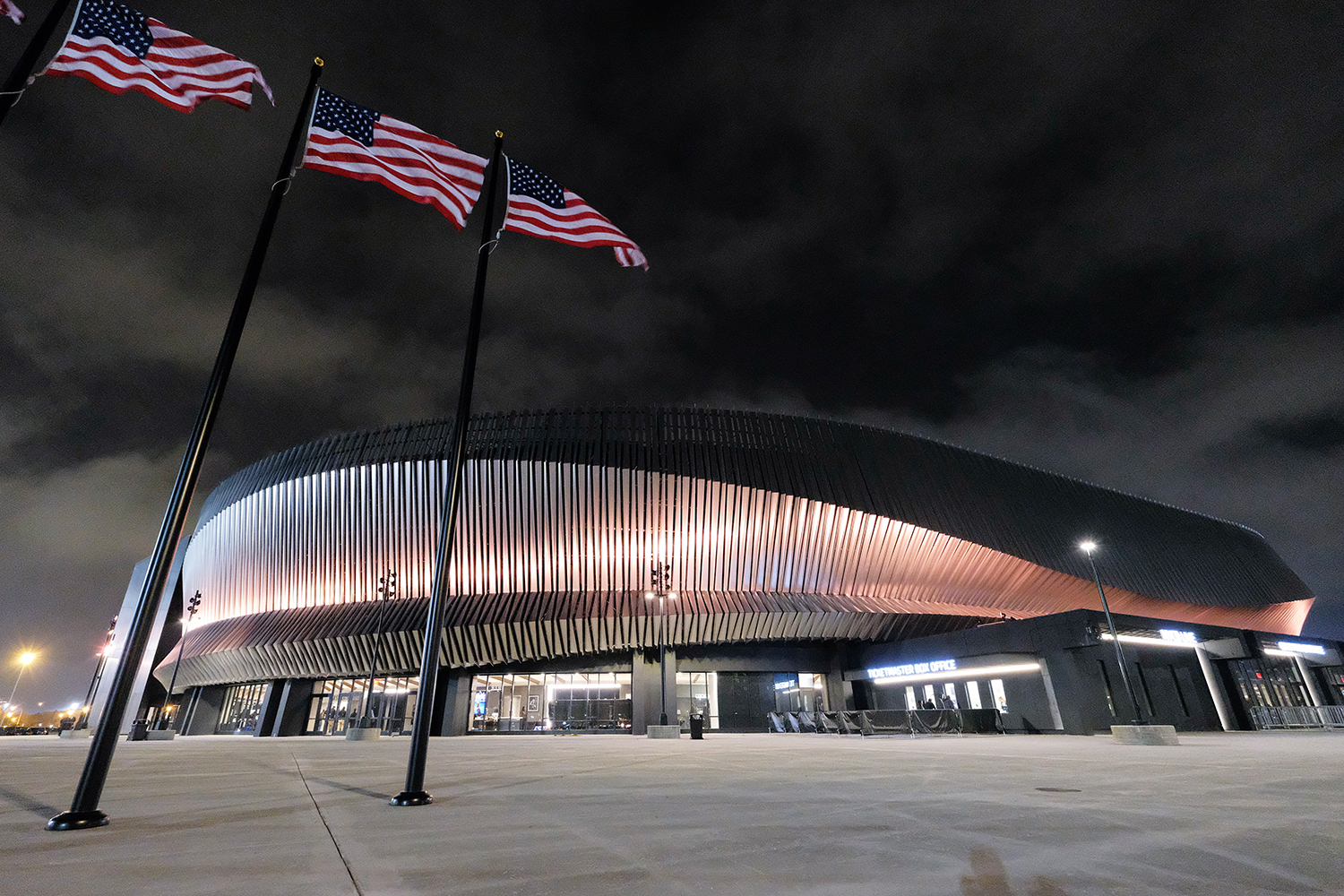 As of now, the Long Island Nets of the NBA Development League are the only sports team to call the Nassau Coliseum home, but the New York Islanders are leaving the Barclays Center in two years and could conceivably be coming home to their old stomping grounds. “We’re in discussions with them about what their future is,” says Yormark. “Obviously we control two venues in the market, so we’re having healthy dialogue on all the possibilities.”

On opening night, though, nobody was thinking about anything but Billy Joel. “The first time I was here was 40 years ago, 1977,” he said early on. “It’s an honor to be doing this tonight. Thanks for coming with all the traffic bullshit. We’re going to try and do a sampling of all the albums over the years.” They managed to hit every one besides The Bridge, and even though the bullshit went far beyond traffic it was well worth it to see Billy Joel in his native environment still somehow in peak form just three years away from his 70th birthday. We’d happily go through all of it again, but next time just put the ketchup a little closer to the hot dog stand. That’s all we ask.