Now that’s how you cap off a Billy Joel show – the Piano Man bringing in surprise guests Paul Simon and Miley Cyrus to sing “You May Be Right.”

It was a bizarre but fitting climax to Joel’s Saturday night concert, the latest installment of his monthly residency at Madison Square Garden, his home court, in front of his most rabid local fans. Joel, Cyrus and Simon made a trio of big shots—Joel presided at the piano while Simon & Twerk-funkel traded off lines. Simon, in impressively frisky shape, kept grinding his hips. Miley, who had just performed the night before in Nashville to debut her new album Younger Now, belted the “dirty jokes” verse. As “You May Be Right” swerved into a medley with Led Zeppelin’s “Rock and Roll,” it was a classic Billy Joel moment – this man’s greatness is that he’s always the lunatic we’re looking for. He may be crazy, but you wouldn’t want him any other way.

Both guests appeared earlier in the show. When Joel announced, “From the borough of Queens – please welcome Mr. Paul Simon,” his fellow legend shuffled on with an acoustic guitar to sing “The Boxer.” That led to a superb jam on Simon’s 1980 salsa-fied hit “Late in the Evening.” Seasoned fans – and they don’t get more seasoned than this crowd – recalled both guys doing this song on Long Island a couple of years ago, the night Joel closed Nassau Coliseum.

Billy Joel's 'The Stranger' at 40: A Track-by-Track Guide

But it’s safe to say nobody was expecting Miley to crash this party, much less sing “New York State of Mind.” When she strutted out in her gold lamé slacks, stilettos and a vintage Joel T-shirt, it seemed most of the crowd had no idea who the hell she was – many fans wore startled expressions that seemed to ask, “Where did Carly Simon get that makeover?” But Miley came in like a wrecking ball, nailing the high notes as Joel raved, “The girl’s got pipes.” 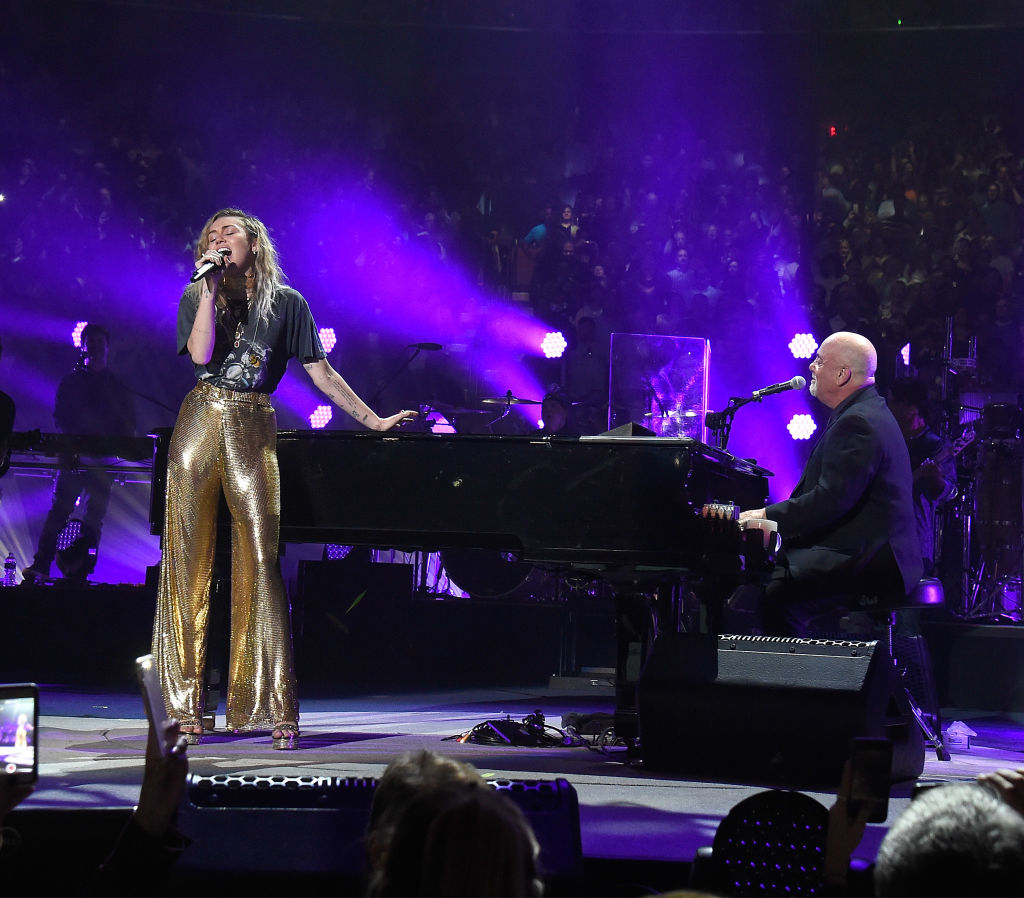 Saturday night was the 45th show of his historic residency – by now, Billy Joel at the Garden is like Brenda and Eddie at the Parkway Diner. The singer and the venue have a symbiotic bond, especially since his triumph at the 12/12/12 Hurricane Sandy benefit almost five years ago, where he stole the show and announced his renaissance as a live world-beater. His monthly MSG galas are already sold out through the end of the year. It’s a stage where Joel always feels free to be his own salty self – at his August gig, he made headlines by wearing a Star of David in response to the Nazi terrorist attack on Charlottesville. (And in response to the President who described these Nazis as “very fine people,” he showed a video montage of recently fired Trump Administration flunkies while he and Scandal’s Patty Smyth sang her hit “Goodbye to You.”)

Joel kicked off Saturday night with “Miami 2017 (Seen The Lights Go Out On Broadway),” a song that once seemed bleak and apocalyptic, but now seems wildly optimistic in its vision of 2017. As his rotating piano spun around, he explained, “That’s it for the special effects. The piano goes this way, the piano goes that way—that’s it. I used to work with a guy—he played the piano too.” Then he ripped into a viciously funny parody of his longtime tourmate Elton John, doing “Your Song,” up to the line “Don’t have much money.” “I beg your pardon? You don’t have much money? You’ve got enough money to move the piano around—but no, the piano just stood there. Come on, man—spin the motherfucker!”

Joel teased the crowd by leading the band into Bruce Springsteen’s “Born To Run,” but cut it off after the first verse, snickering, “You’re gonna have to go to Broadway to figure out the rest of that.” As always, he let the audience vote on a few “fielder’s choice” selections, and as always, the hardcore fans roared for the deep cut “Vienna” over the hit “Just the Way You Are.” (After singing “Vienna,” he said, “I agree with your pick.”) The crowd also went for “Zanzibar” over “Big Man on Mulberry Street”—both great NYC songs, but there’s just no topping “Zanzibar.” “The Longest Time” beat out “An Innocent Man” (“from an album that came out in ninety-eighty…four? Something like that”). He spiked it with snippets of the doo-wop classics “Teenager In Love” and “Runaround Sue” from Bronx legends Dion and the Belmonts, adding, “Dion DiMucci—no relation to Scaramucci.” 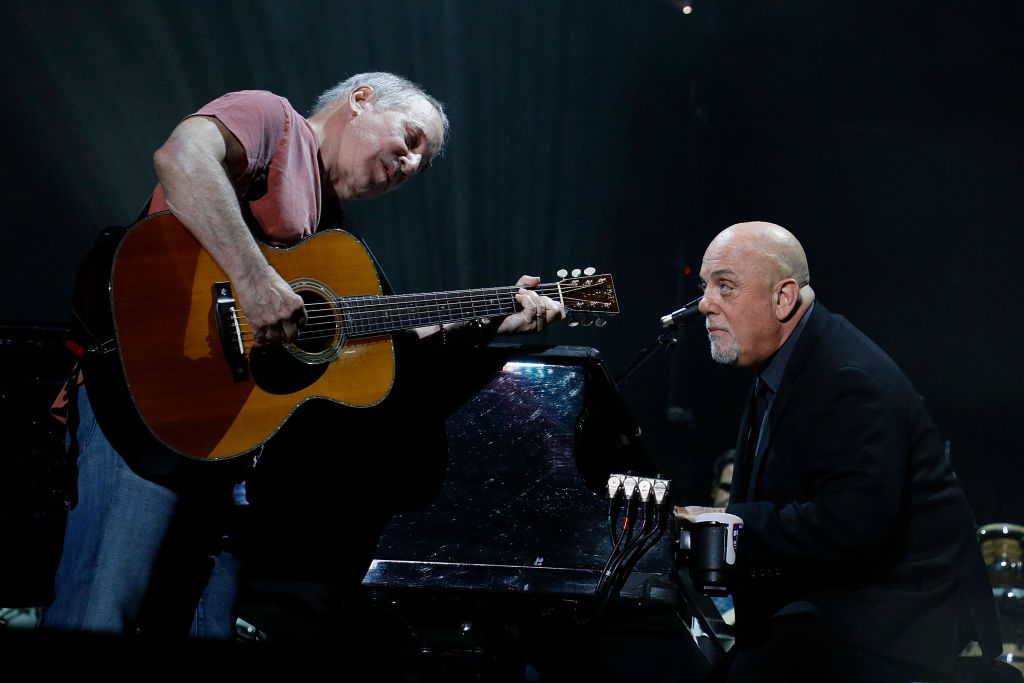 He sang warhorses like “Piano Man,” grinning around the room as he sang the line, “It’s a pretty good crowd for a Saturday.” (Where is that bar where Saturday is a slow night?) He also showed off the harmonica skills he perfected in his classic 1980s TV ad for Rolling Stone. The set had fan favorites like “The Downeaster Alexa” and “Scenes from an Italian Restaurant,” as well as hits like “Movin’ Out (Anthony’s Song)” and “Don’t Ask Me Why.” “You are still a victim of the accidents you leave / As sure as I’m a victim of desire” – that’s some hardcore Seventies sexual realism. Guitarist Mike DelGuidice took his customary solo turn singing the Puccini aria “Nessun Dorma,” an odd yet touching showcase for the guy Joel found in a Long Island tribute band called Big Shot.

In the encore, Joel got up from the piano bench to rock out on hits like “It’s Still Rock & Roll to Me.” This weekend, it sounded strange that the late Hugh Hefner doesn’t get a name-check in “We Didn’t Start the Fire” – doesn’t it seem like Hef should be in there somewhere, between “Edsel is a no-go” and “Belgians in the Congo”? (Yet the shout out to Sugar Ray Robinson came off as a de facto R.I.P. to Jake “Raging Bull” LaMotta, who got crushed by Sugar Ray at the Garden in their historic 1942 fight.)

But the highlight of the encore – and the whole night – had to be “You May Be Right.” Billy Joel has always proudly stood for the shameless try-anything-once pop spirit, and in their very different ways, Paul Simon and Miley Cyrus share that same spirit. (People are scandalized that Miley has just dropped a country album and ditched her psychedelic-twerk phase – but nothing looks sillier than expecting principles from a pop star.) For the Brendas and Eddies in the house, many just breaking their Yom Kippur fasts, it was an apt way to kick off the new year – and a reminder of why Billy Joel can keep packing this legendary room every month for as long as he wants.

Encore:
“You May Be Right” (with Paul Simon and Miley Cyrus)
“Uptown Girl”
“It’s Still Rock & Roll To Me”
“Big Shot”
“Only The Good Die Young”