While the eyes of the world remain focused on Ferguson, Missouri, the St. Louis suburb where protests and nightly clashes with authorities have held sway, folk singer Billy Bragg found an opportune moment Tuesday night to make a small, positive gesture.

Bragg and touring partner Joe Purdy were in the Midwest, tracing the route of the Rock Island Railroad as part of a photo-and-film documentary for Aperture magazine’s forthcoming 90th birthday celebration of Robert Frank (The Americans, Cocksucker Blues). Realizing they were only a few hours’ drive from St. Louis, they hatched the idea for an impromptu benefit.

“A number of people said to me on Twitter, if you’re going to go to St. Lou, are you going to go to Ferguson?” Bragg tells Rolling Stone. “But we didn’t want to just go there and walk through Ferguson and be tourists. We wanted to do something for the community.”

A friend put Bragg in touch with the Royale, a neighborhood pub in South St. Louis whose owner, Steven Fitzpatrick Smith, has been attending the protests. Smith immediately offered the Royale’s courtyard for a show and suggested to Bragg that food, funds, and medical and school supplies be collected at the door for the Food Pantry at Ferguson’s St. Stephen’s Episcopal Church. “Ten minutes after our phone conversation, I saw a tweet from Steve with my name in it, so I knew it was on,” Bragg said. 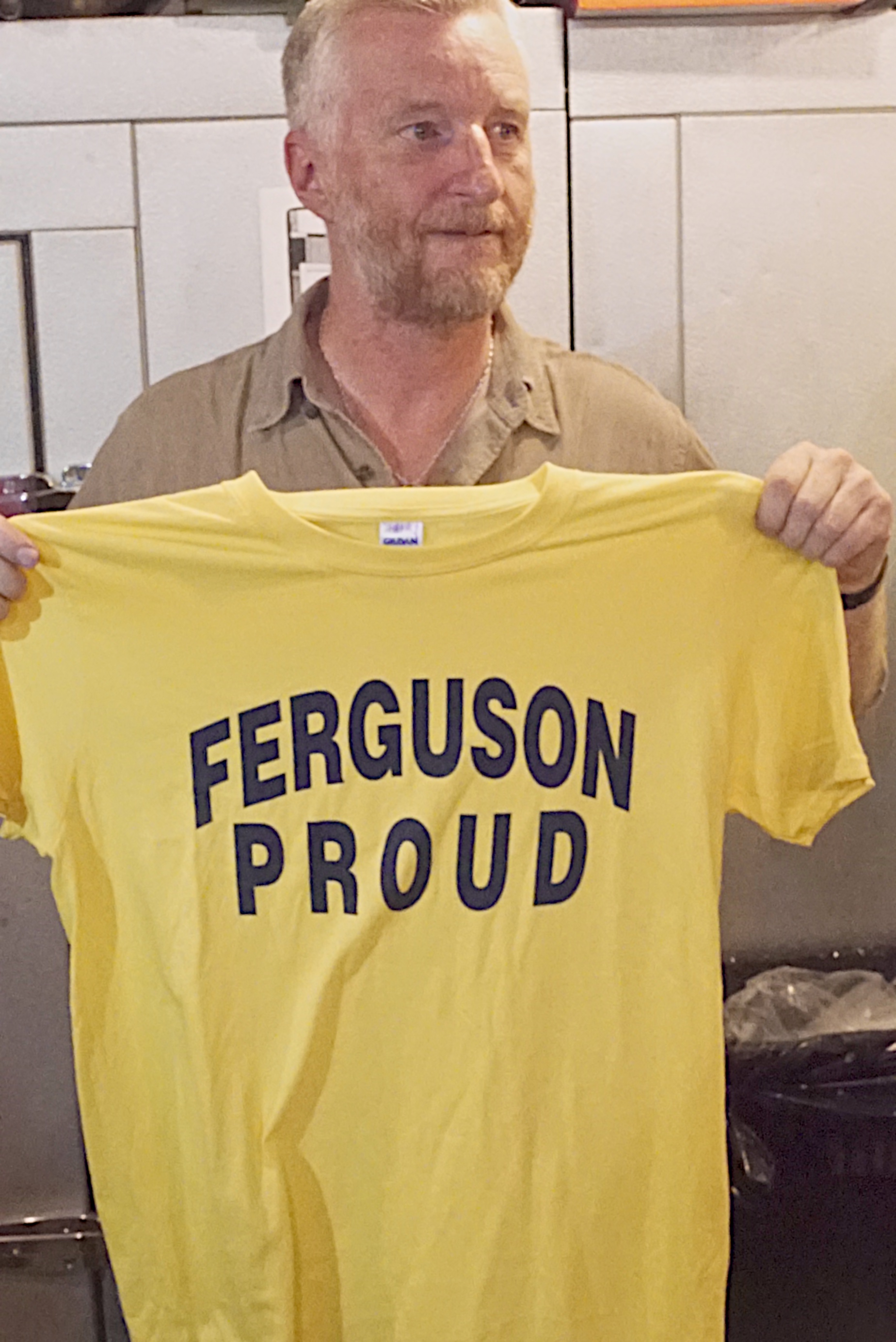 Bragg and Purdy performed for more than an hour, in tandem and alone, harmonizing on “Rock Island Line” before Bragg dug into songs that were more directed at the drama unfolding a few miles north. He sang Woody Guthrie’s “Hangknot, Slipknot,” George Perkins’ civil-rights-era anthem “Cryin’ in the Streets” and his own “I Keep Faith.” The pair joined together for a singalong finale of Bob Dylan’s “The Times They Are a-Changin’.”

“The true enemy of all of us who want to make the world a better place is not capitalism or conservatism, it’s cynicism,” Bragg told the 200 people in attendance. “You have the opportunity to show the world that St. Louis is not a cynical place.”

Earlier in the day, Bragg and Purdy had met with railroad strikers in Galesburg, Illinois, where they also sang a few songs with teachers walking a picket line. Later, they performed at the Iowa State Penitentiary in Fort Madison as part of Bragg and former MC5 guitarist Wayne Kramer’s Jail Guitar Doors, a program that provides musical instruments for inmates.

“It’s Woody’s work,” Bragg tells Rolling Stone. “And if we’re going to be true to the little guy — more than just singing ‘This Land Is Your Land’ — then doing something that brings a bunch of people together and raises some money for a struggle is much more like the work that he and Lead Belly did. It’s a no-brainer.”