The Big Ears Festival in Knoxville, Tennessee provides a listening experience unlike any other in America. At the 2017 edition, Norwegian drone musician Deathprod blasted deafening noise inside a 1920s theater listed in the National Register of Historic Places, while the Knoxville Symphony Orchestra played Bach on the floor of a rock club. Cell phones got alerts that a performance by Chinese guzheng player Wu Fei was at capacity, while Wilco frontman Jeff Tweedy could be found squalling to a small audience in an improv noise band. A hundred volunteers rubbed rocks and spilled seeds for a hushed percussion piece in the Knoxville Museum of Art, while cellist Oliver Coates shredded Iannis Xenakis in a sweatshirt.

It was the biggest, boldest lineup in the history of the fest – now expanded from three days to four. Despite some appearances from art-centic rock bands (Wilco, Tortoise, Deerhoof) the leash tethering Big Ears to indie-world weirdos has been somewhat loosened. Instead it was a practically headliner-free assortment of contemporary classical, jazz artists and soloists from across the globe.

It would be presumptuous to call classical composers the new rock stars, but this weekend it was definitely hard not to see the edges of genre fraying, the worlds of classical music and popular music blurring, the pretentions of “high art” crumbling as beers clinked in the background. No moment showcased this better than festival highlight Drone Mass performed by Arrival composer Jóhann Jóhannsson. Drone Mass – performed by Jóhannsson with string quartet ACME and vocal group Theater of Voices – seems designed to tug at modern heartstrings. It has the glacial drama of minimalism, the familiar harmonies of church music, the keening drama of pop, the deep digital rumble of modern cinema – all in movements that feel about the length of a rock song. Played to a standing crowd in rock club Mill & Mine, the piece made it difficult not to adhere to the unwritten, long-held orchestra rule of not applauding until the end. But after a movement where a vocal drone met a cello slide – the satisfying sound of a properly tuned guitar, an effect like a film coming into focus – the boundary was breached and torrents of applause followed.

The major classical event of the weekend was British minimalist Gavin Bryars, conducting his ensemble in the United States for the first time ever. He played his 1971 arrangement Jesus’ Blood Never Failed Me Yet, a piece for a tape loop of a singing homeless man and his swooning orchestra following along. The work’s chill-inducing effect was multiplied by the orchestra’s being front and center, while the man’s voice floated above. Bryars himself played the mournful double bass phrase. In a performance of his somber 1972 piece The Sinking of the Titanic, the addition of a multimedia presentation of archival footage and Philip Jeck’s crackling turntables gave it serious emotional weight. 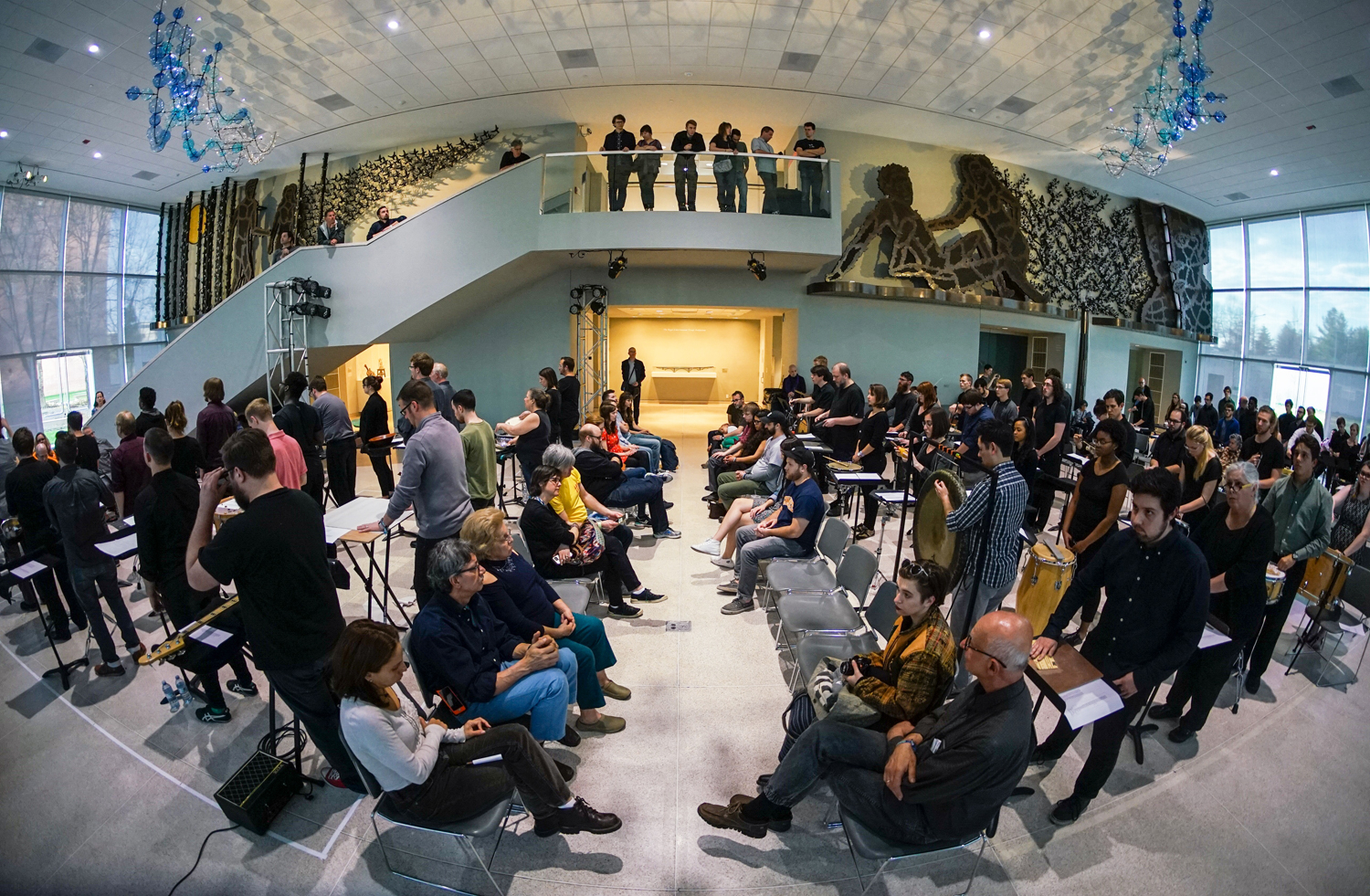 For the first scheduled performance of the weekend, Andy Bliss of local percussion ensemble Nief-Norf played a slow mallet roll on a ride cymbal to kick off Pauline Oliveros’ composition Single Stroke Roll Meditation. As the overtones blended with other percussionists in the room, the clashing created waves of sound like a somber fire alarm. The ensemble followed with Michael Gordon’s Timber, an hour-long collection of malleted flurries on blocks of wood. Seeing these waves of wood clunks in person reveals things that can’t be translated onto the 2011 recording: the way the sounds change as the mallets get closer to the center, the machinelike harmony of the performers, the way an already polyrhythm-heavy piece required the performers to work out complex patterns between their own left and right hands.

Flautist Claire Chase performed a solo version of Steve Reich’s Vermont Counterpoint that was blissful and sparkling and later performed the commissioned “An Empty Garlic” by Du Yun – a piece full of breaths, barks, sizzles and onomatopoeia – swooping about with her flute like she was wrestling a cobra. Oliver Coates performed a selection of cello pieces that ranged from the gnarled scrapes of Xenakis’ Kottos to the gently plucked arrangement of Squarepusher’s “Tommib Help Buss.” The ACME string quartet added vocals (courtesy of Theater of Voices) and percussion (courtesy of Deerhoof drummer Greg Saunier) to a version of Charlemagne Palestine’s Strumming Music that was questionable at first but dramatic by the end and sounded like the third note of the Also Sprach Zarathustra melody held for minutes. Matmos gave Robert Ashley’s text-based opera Perfect Lives (Private Parts) a squishy makeover, transforming “The Bar (Differences)” until it sounded a bit like the giddy art-droll New Wave of the Flying Lizards or Trio.

The peak of Big Ears’ modern composition focus, at least in ambition, was the performance of Michael Pisaro’s A Wave and Waves, a work for 100 musicians gently sandpapering rocks, bowing brake drums, ripping paper and pouring pebbles. With the audience seated in and around the performers, it was as immersive as listening experiences got over the weekend. The piece functioned somewhat like electronic music, with noises combining into grainy spills and tinnitus squeals, and actually felt more familiar in chaos than repose. 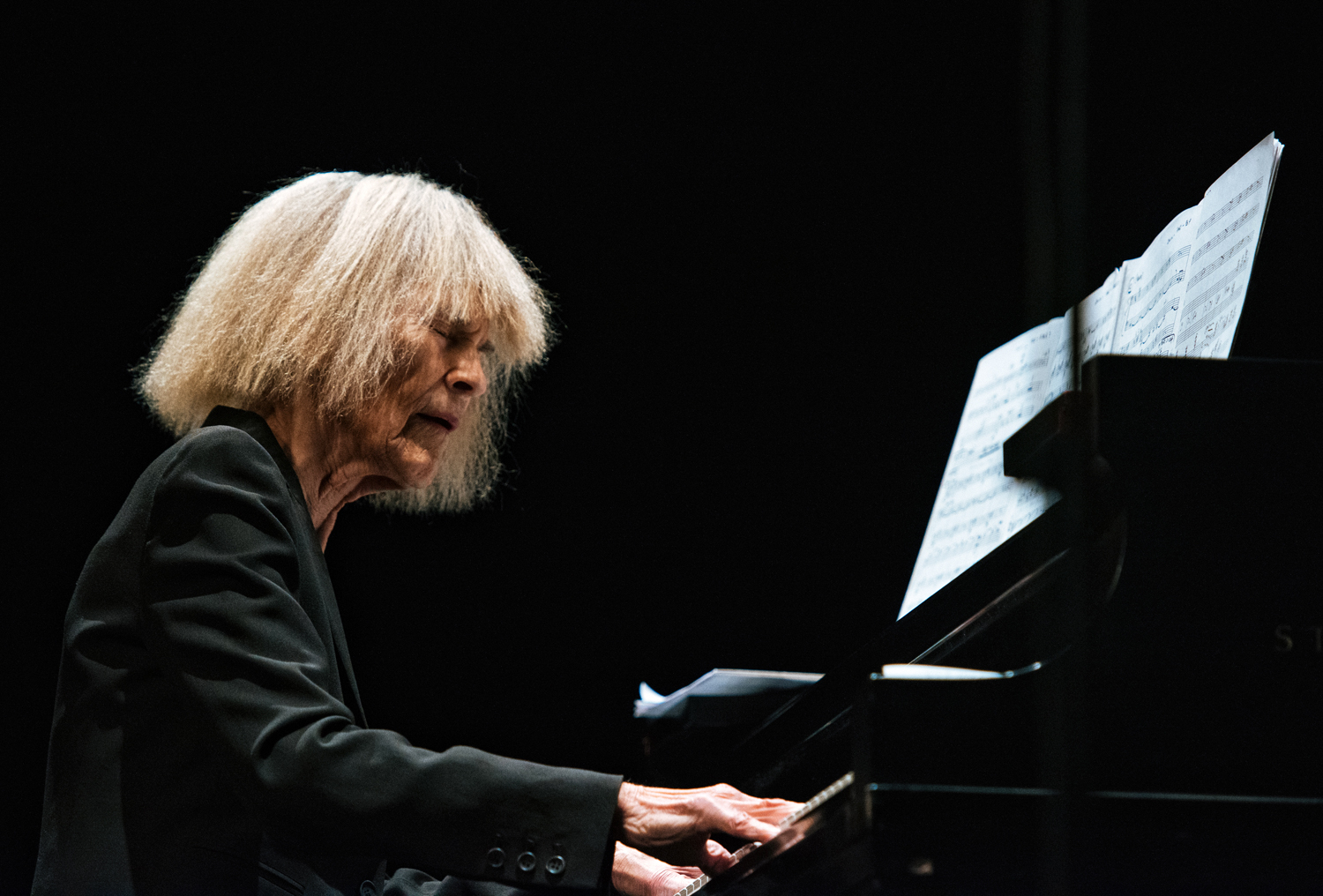 Leading the impressive jazz roster, icon Carla Bley conducted the Knoxville Jazz Orchestra with sharp motions. Her five-part 2001 composition “The National Anthem” (“What better time,” she quipped with a laugh), is technically a big band piece, but the minor-key funkiness (anchored by bassist Steve Swallow) and dissonant satire of the Francis Scott Key composition made it part Funkadelic, part Spike Jones, part On the Corner. Recent Pulitzer Prize winner Henry Threadgill’s Zooid brought an unlikely set up (acoustic guitar, cello, tuba, flute, drums) to unlikely arrangements, coalescing into lumbering flat-tire rhythms. Matana Roberts played a jazz show that felt like a noise show, complete with drones, loops and some shouting over the chaos, bringing some of the narratives of her 2011 album Coin Coin Chapter One: Gens de Couleur Libres into the intimate swirl of her more recent work. The 74-year-old free-jazz drummer Bobby Kapp teamed with pianist Matthew Shipp for an amazing dance of improvisation. Kapp’s loose-limbed playing drifted in and out of Shipp’s precise, almost militaristic tumbles of notes for a performance that swung between jaunty, apocalyptic and almost telepathically in sync. Steve Lehman and Sélébéyone played funky jazz-rap like loops going out of phase, walking the lines of groove and anti-groove. The performers were rhythmic marvels, the music feeling like funk but working like prog, with MCs rapping over 10/4 rhythms and the band hitting insane accents. Still, for all their wowing arrangements, the audience pleaser was the rapid-fire chops and high energy of Senegalese rapper Gaston Bandimic. 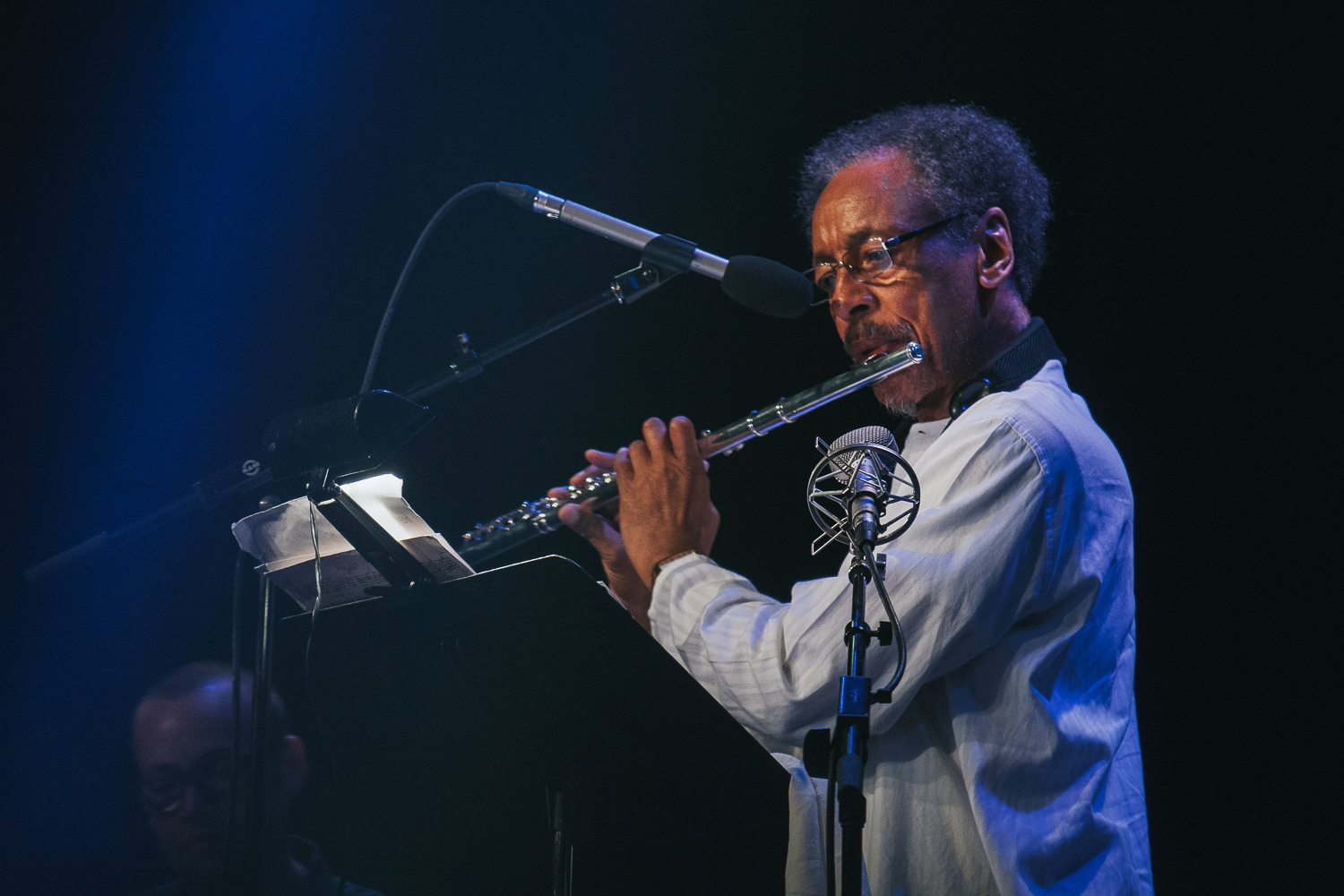 Norwegian trio Supersilent played a midnight improv set that blended elements of ambient jazz trumpet, heavy-metal menace and harsh laptop jabs. Building from slow rumbles to jarring staccato electronics, the band had the explosive stage presence of a rock band going into full gear while doling out sprays of digital shrapnel that fell in arrhythmic globs. The following night, that group’s Helge Sten a.k.a. Deathprod would perform what is often called “dark ambient,” but at that decibel level felt more like “doom shoegaze.” His drones, at incredibly high volumes, occasionally sounded like a drill was boring through the Tennessee Theater. A series of eight siren-like jump scares, pulse-quickening and flinch-enabling, were easily the most visceral moment of the weekend.

Musica Elettronica Viva, royalty of noise and electronic music dating back to the mid-Sixties, worked with a gentle palette of Satie-esque piano drips, bluegrass samples, digital splats, searing noise and a quick run-through of “Drunken Sailor.” As improv, it was masterful, full of patient layering, gentle touches and a mix of the digital and analog. As a performance, it was a comedy of errors, with an in-the-round performance providing a perfect view of the mess on Alvin Curran’s crashing laptop. Jeff Tweedy joined powerhouse drummer Chris Corsano and bassist Darin Gray (a.k.a. Chikamorachi) for some splattery noise-jazz. The Wilco star couldn’t exactly compete with their insane battery of sound – Gray rubbing his bass with what looked like a splash cymbal and Corsano rapidly exploding – and the performance felt like a Monet hung next to two Jackson Pollocks. Still, Tweedy’s patient rumble, generous feedback and a little twang gave them a vibe like Neil Young and Crazy Horse gone John Zorn. Kaitlyn Aurelia Smith spilled forth with deep, gorgeous, prismatic drones and colorful projections. One of the moment’s most popular and buzzy experimental musicians thanks to her 2016 album Ears, an audience hungry for more let out an “awwww” when the lights went on instead of an encore.

The audiences for the musical performances were passionate and voluminous throughout. Singer-songwriter My Brightest Diamond filled the Bijou Theater to capacity. There have been stages at Bonnaroo that had less people than a Steve Lehman show with a 50-minutes-late start. Said vocal gymnast Meredith Monk after an a cappella song that danced across melodic logic: “I don’t know if I’ve felt such a generous and warm audience in a long, long time.”