“It’s like a family reunion,” she said Monday night, beaming onstage at the sold-out historic Apollo Theater in New York City. Accompanied by guitarists Jason Orm and Julian Coryell, Morissette performed her 1995 breakthrough album, Jagged Little Pill, in its entirety; in lieu of an actual campfire was a toasty reception by longtime fans, and some more recent converts.

“Just keep the creepy uncles in the back,” she added.

Morissette’s acoustic performance was just one phase of an epic rollout for her new musical based on the album, Jagged Little Pill. Adapted with an original story by acclaimed screenwriter Diablo Cody, the production will make its Broadway debut December 5th at New York’s Broadhurst Theatre.

Earlier that day, Morissette dropped two more bombs: In honor of Jagged‘s 25th anniversary in 2020, she announced a summer tour with fellow alt-rock heroines Liz Phair and Garbage. Morissette also released “Reasons to Drink,” the first single of her upcoming album, Such Pretty Forks in the Road, which she penned in tandem with the musical.

The only thing Morissette would be drinking that night, however, was ample amounts of water and chamomile tea. “Can we discuss the pee I’m gonna have later?” she joked between songs, and bottles. Apart from sublime moments of oneness shared between her and her audience — who doubled as an emphatic backup choir during songs like “Head Over Feet,” “You Oughta Know,” and a later cut from the City of Angels soundtrack, “Uninvited” — Morissette’s stage banter was the main event. “You may have said ‘pretty awesome,’ but I heard ‘pretty awkward,'” she replied to a vocal fan in the crowd. “But I’m from Canada, so that’s a compliment!”

Morissette further roused listeners by musing, somewhat critically, on her early days. Before performing “Not the Doctor,” she recalled: “When I was first dating, I just thought, ‘You have your stuff, and I have my stuff.’ But when I got married to the man of my dreams 10 years ago, I realized that I wanted to actively participate in his healing, and vice versa.”

As for the man of her dreams, rest assured he’s not the one we once knew from her 1996 megahit, “Ironic.” “It’s like meeting the man of my dreams and meeting his beautiful…. husband!” she quipped at the bridge of the song, sending audience members of all sexual persuasions reeling with laughter.

She also shared her first live performance of “Smiling,” a sanguine new track from her upcoming album; then she put aforementioned creepy uncles on blast with a chilling performance of an original song from the musical, “Predator.” It’s both her most genuine comedic flair, and her most sobering bouts of reflection, that lend her songs a lasting universality.

The performance was followed by a short discussion with journalist and Sirius XM host Alan Light. When performing songs from Jagged Little Pill, she told Light, “I don’t think about Alanis then… I’m just right here! But thankfully, these songs have stood the test of time, in that I can stand by them.”

“There are some updates happening in the musical,” she added. “And thank goodness.”

Such Pretty Forks in the Road is slated for release May 1st, 2020. It will be her first studio album since releasing Havoc and Bright Lights in 2012. 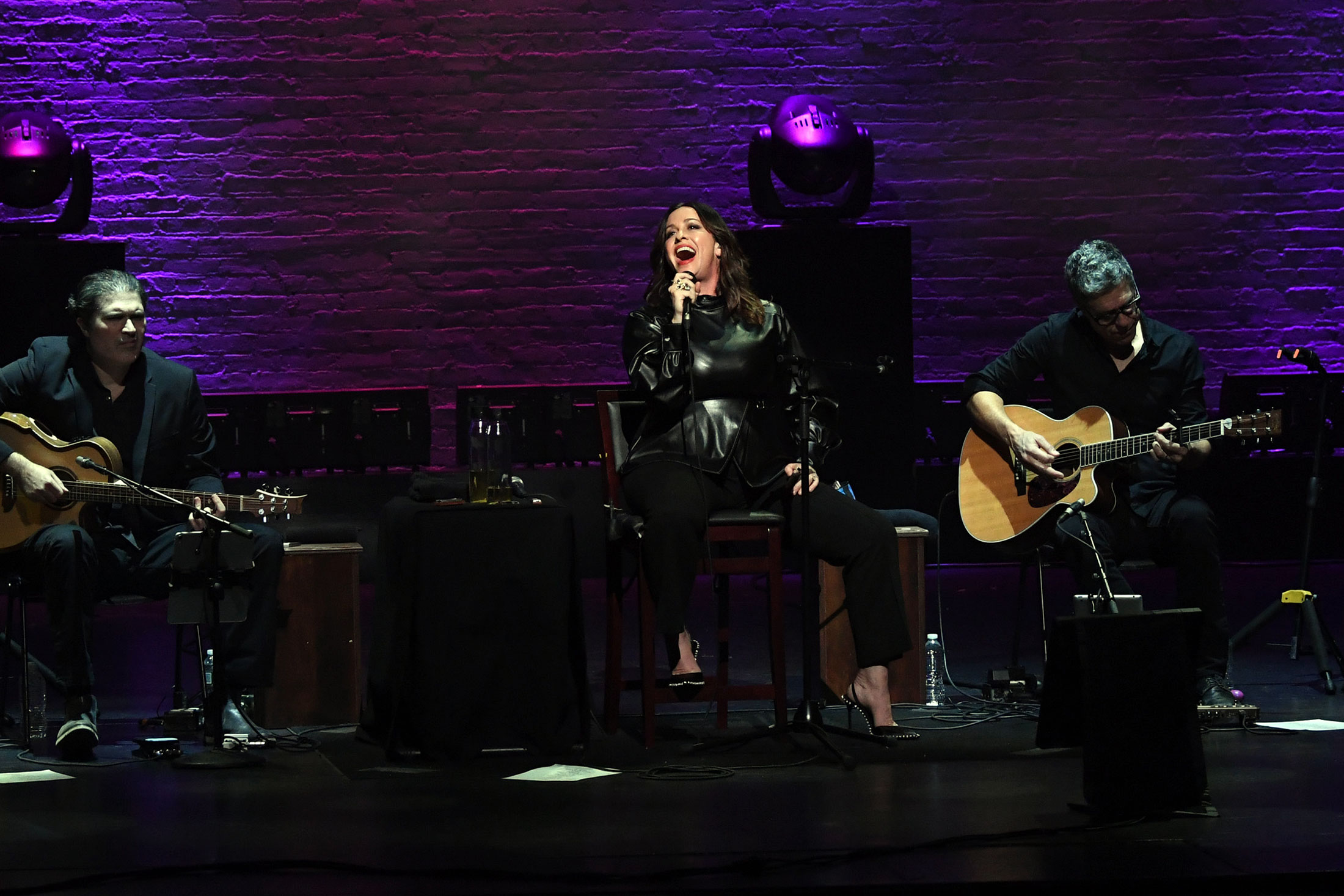 Alanis Morissette One Night Only Performing “Jagged Little Pill” at The Apollo Theater on December 02, 2019 in New York City. Photo credit: Kevin Mazur/Getty Images for AM

Getty Images for AM