1. For the past five years, the world’s biggest pop group has been the world’s biggest classic-rock band, doing their “Baba O’Riley” remake every night for 60,000 screaming girls. “People like us don’t get to play stages like this,” Harry Styles said last night at New Jersey’s MetLife Stadium, and he’s right. Strange but true: One Direction are on top of the classic-rock stadium-band pyramid these days.

2. Harry and Louis are the Stevie and Lindsey of the mermaid-tattoo-era stadium-rock eye-contact game. Louis’ eyes are dark, intense, controlling, with a surly “damn your love, damn your life” edge. Harry’s eyes say “I hear the darkness you’re expressing and it’s important to me but my heart tells me to twirl right now,” so he twirls and touches his hair. The brooding look vs. the beatific twirl. When one of them gets happy, the other gets wistful. When one of them gets bitchy, the other gets sugary. I could watch them sing together for hours. I could probably watch them do laundry for hours. (I doubt they do laundry.)

3. One Direction played MetLife Stadium a year ago to the day, and they were great that night—but very different, and nowhere near as great. 1D are massively better as a foursome, because their personalities all have much more room. Last year they were so competitive for stage time — Niall and Zayn seemed to be auditioning for their solo careers. Harry spent much of the 2014 show with his mop wrapped up in a headband — obviously ambivalent about the onstage traffic jam. (Harry covering his hair onstage is like Stevie Nicks in sweatpants.) Tonight, the hair was free, and Harry’s hair is always the window into his soul. Without Zayn they have to work harder — they’re all singing more lines and patrolling more turf — but they’re needy boys and they like it that way.

4. Harry Styles, master of the power flounce. For a band that formed on TV, 1D are not done justice by video, because Harry is a performer you have to see live. The way he covers space is insane — imagine if Mick Jagger had the warm and benign heart of Paul McCartney, cast under a magic spell by Stevie Nicks, and you’re about halfway there. Every limb of his body is an instrument he uses to express to girls how happy he is to bask in their presence. He uses his arms, he uses his legs, he uses his style and he uses his sidestep. He’s in a pop-star zone where he can seem totally self-adoring and cosmically benevolent at the same time.

5. Literally the first thing Louis does onstage is run to the corner and wave up to the nosebleed seats in the upper deck, a mile in the sky with only a side view. He’ll take care of the fans up front later, but his first order of business is making sure the cheap seats get noticed.

6. Harry announces, “You’re lovely to be in here. We can see you at the top. We can see you up in the back. You’re a beautiful, beautiful bunch of people.” So much of 1D’s brilliance is convincing everyone they can see the crowd, despite all the glaring lights in their faces. The key line in their new smash “Drag Me Down”: “All these lights can’t blind me.”

7. The screaming is like two and a half hours inside a jet engine, but in a good way. Loudest moment: The climactic shriek in “Midnight Memories.” Runner up: when the video screen show’s Harry’s boots.

8. Harry’s twirl game explodes in the second chorus of “No Control” — he romps off to his corner and spins in circles. He’s not singing, he’s not up on the video screen, just going into his happy place. During “Diana,” he went for a sprint down the catwalk and back, for no reason. Dude’s been on his feet 90 minutes at this point.

It’s like watching the footage of Secretariat running the Belmont Stakes in 1973 — he’s 31 lengths ahead of the other horses, but he speeds up madly for the final stretch because he’s so in love with being fast. That’s what it’s like watching Harry work a stadium. You instinctively think, “Dude, save some for later,” but the whole physiology of saving some for later is alien to the Harry lifeform. The harder he works to give every drop of his Harry-osity away, the more of it he has. Watching Harry spit water and touch his hair makes me want to be a better person.

9. Speaking of twirling, we know from the gossip columns that Harry is a hardcore Stevie Nicks fan — he even baked her a birthday cake. Why haven’t we seen pictures of this cake?

10. These boys love the whole 1970s rock thing — they call this tour On the Road Again, which should be the name of a double-vinyl live album from a 1974-era Southern AOR sextet who sing about rockin’ down the highway. The tour program has the size and heft of an LP, full of Time Fades Away–style black-and-white pics of boys near amps. The classic-rock-as-teen-pop thing is so avant-garde, the rest of the music world still hasn’t found a way to imitate it. Their Fleetwood Mac homage “Fireproof” even nails the precise John McVie bass throb.

11. After “Fireproof,” Harry takes a bow at center stage — he bends all the way at the waist and then whips his hair up to high noon. Hair flip of the night. 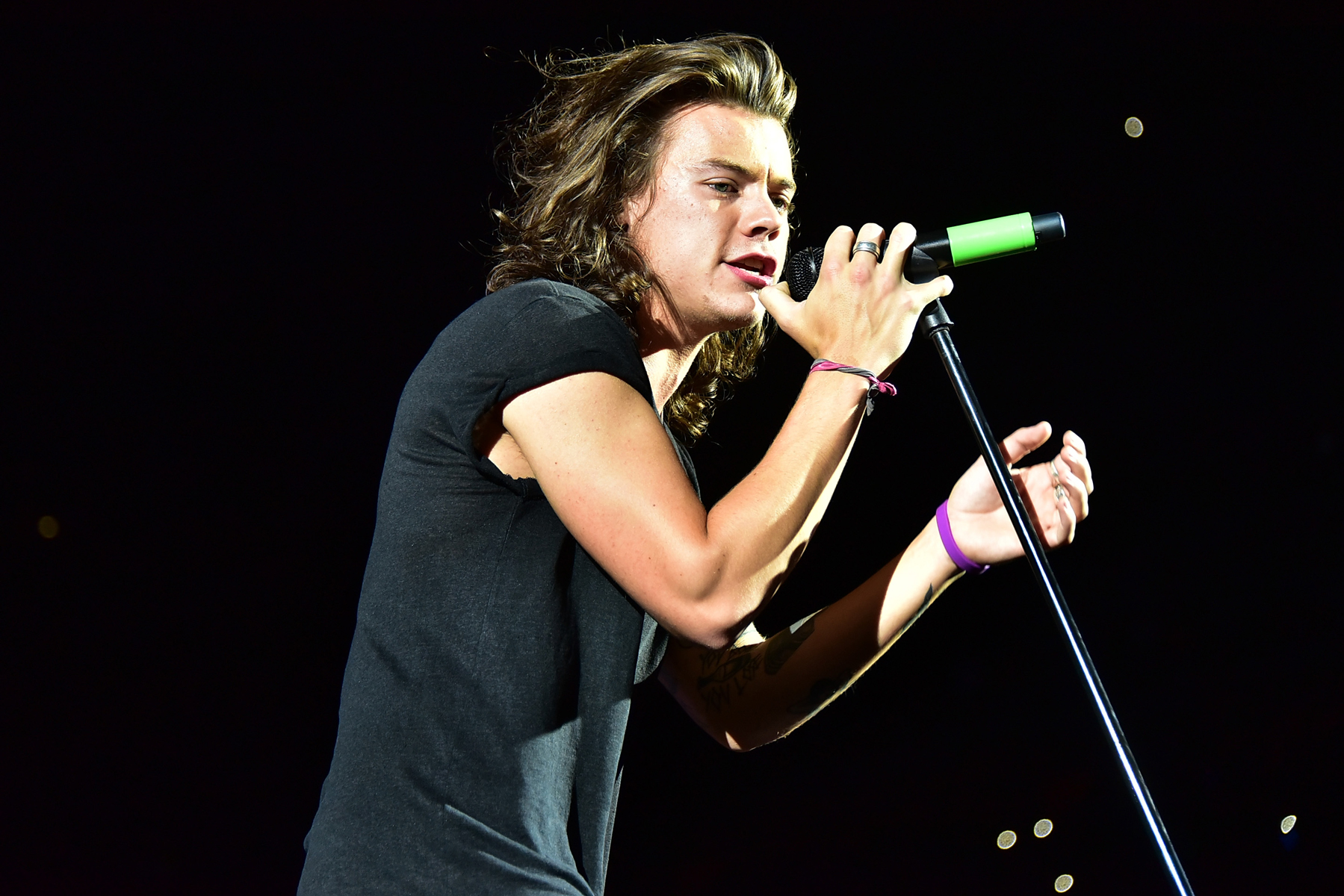 Harry Styles of One Direction performs at MetLife Stadium on August 5, 2015 in East Rutherford, New Jersey.

12. Niall has really grown — his guitar used to seem like a shield he hid behind, but he was killing it from the first song (“Clouds,” where he takes such visible pride in playing the Wings guitar hook and looks around to see if his bandmates noticed) to the last (“Best Song Ever,” where he air-keyboards to the Townshend synth intro).

13. 1D talked a lot about how much they love their best song, “No Control.” “You’re the greatest fans in the world because you all fell in love with a song called ‘No Control,'” Liam yelled. “You made it your own!” When they asked the crowd to yell out their favorite song on Four, everyone in my section yelled “No Control.” Is this even an issue?

14. A year ago, there were basically no males — no dads, no dates. I saw more guys onstage than in the crowd. It’s different now — 1D have achieved their longtime goal of conquering the dads. Maybe it was that Vine clip of Louis and Harry and Ron Wood their daughters made them watch over Christmas — a six-second tutorial in what friendship is all about, a Vine I have re-watched and shed tears over and re-enacted and only rarely felt silly about loving — but the dads were here, often wearing T-shirts their daughters made. My faves were “This 1D Dad Is Larry AF” and “Maddy’s Dad Loves No Control.” 1D have achieved this without compromising their core mission, which is singing to girls about how excellent they (the girls) are and how fortunate they (the boys) are.

(That Vine: Louis shares a mic with Ron Wood, Louis knows how much Harry loves the Stones, so Louis slides over to make room for Harry to shimmy next to Ron Wood. This is one of my 10 favorite moments of Ron Wood’s life and I own three of his solo records.)

15. Favorite fan signs: “You Are Currently Attending My Sweet Sixteen,” “Harry Smile! Your Happiness Is The Most Important Thing In My Life.”

16. When 1D blew up, nobody — not even people who liked them — figured they’d be anything more than 16 to 18 months of kicks. What the band and their fans have built over the past five years is unique. If the girls sound cocky and vindicated when they scream, they should. And 1D are brilliant because they know exactly who’s in charge.