Photographer Matthew Rolston enjoyed a long history with Rolling Stone, shooting more than 100 covers for the magazine. Selections from Rolston’s Eighties and Nineties RS work, along with other images from his extensive archive, are featured in a new book, Hollywood Royale: Out of the School of Los Angeles. Below, view a sampling of Rolston’s Rolling Stone portraits from the book, including striking images of Bono, Brian Wilson and Terence Trent D’Arby. 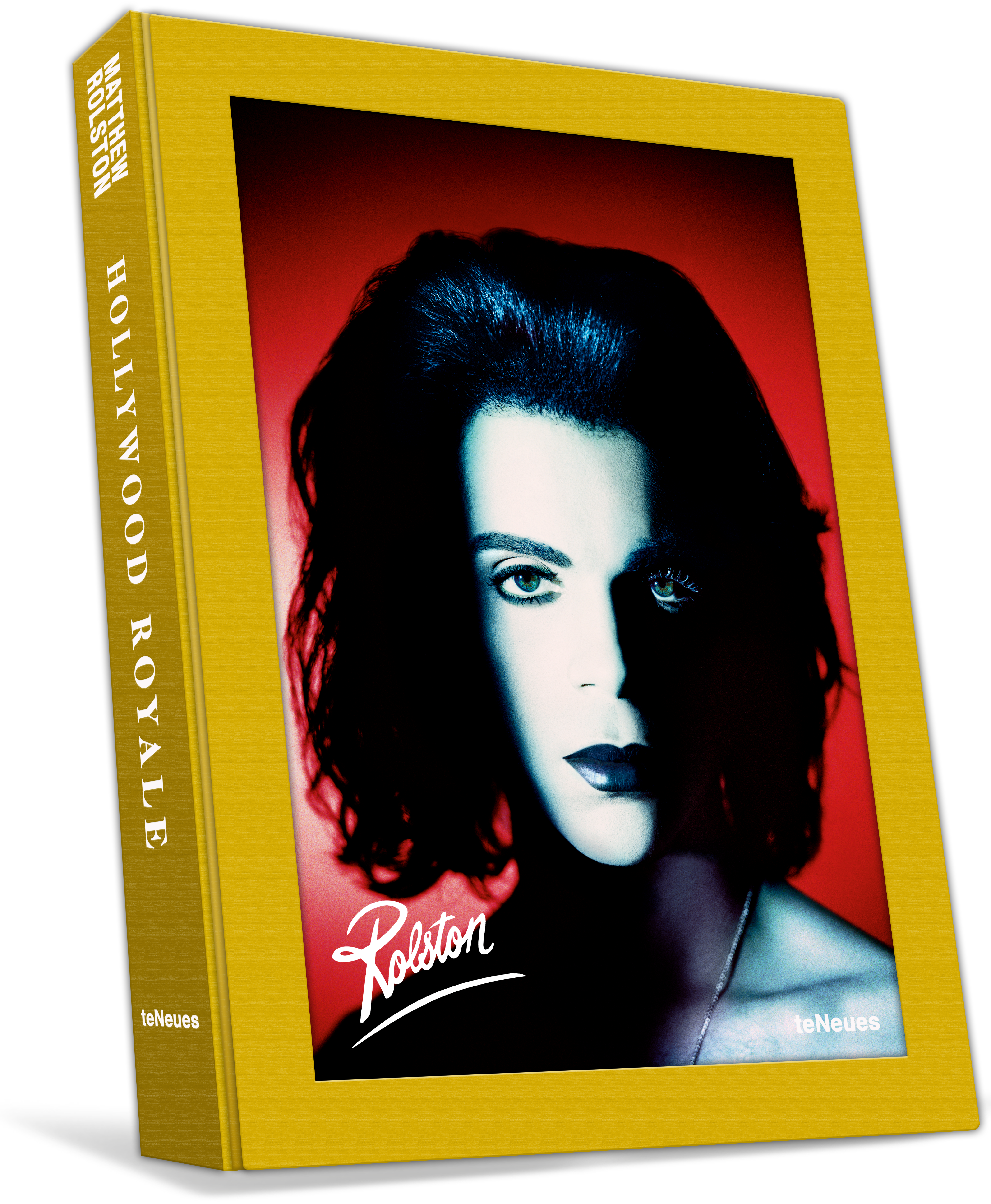 Rolston looked back on each image to provide commentary on how it came about. “David Byrne was so much more than a pop star,” he says of the Talking Heads frontman, the subject of a 1992 Rolling Stone shoot. “He was really a conceptual artist who happened to hit it big in pop music. Best known as the frontman of the legendary band Talking Heads, here I played off that heritage in a rather obvious way. Once again using the 8×10 camera (because I was enamored of its level of detail), I decided to simply show his head – talking (and listening). We played with the idea of call and response, listening and creating. After all, that’s what music’s all about.”

Scroll down for more images and commentary, and go here to learn more about the book, and a Rolston exhibit currently on view at L.A.’s Fahey/Klein Gallery.

U2 was in the midst of a European tour when I flew out to Dublin, the band’s hometown, to photograph Bono for his first solo Rolling Stone cover, a significant moment in his career. Back in those days, there was no such thing as a “rental photo studio.” The only way you could work in a studio in a foreign city was to contact a local photographer and borrow theirs. This shoot took place in a tiny attic studio in Dublin. No idea how I found it, probably through friends of friends … of friends. Bono’s voice was tired from constant touring, so to protect his voice, he spoke in mostly whispers, and, as David Breskin wrote in the corresponding article, he gave the impression of “a young man who quite honestly has not found what he’s looking for.” The light trails are an in-camera effect accomplished by moving a small light around his face in total darkness with the lens open for a time exposure.

At the time of this portrait, Don Henley was a full-blown solo artist known for modern, moody ballads with evocative, poetic lyrics. One of my favorites from a few years before was a song called “Drivin’ with Your Eyes Closed,” from Building the Perfect Beast, Henley’s second solo studio album: “I met a Frenchman in a field last night/He was out there with an easel, painting carnival light.” I loved those lyrics, and they served as inspiration for this simple (but hopefully elegant) diptych, shot with the 8×10 camera.

This was one of the wildest shoots I’ve experienced, and I guess that’s to be expected with someone as spirited as Terence Trent D’Arby. At one point during the shoot, D’Arby turned his back to me and the crew, dropped his pants, and relieved himself, right there on the set. I’ve got a good shot of it somewhere in my files (although never published). We were all stunned. I don’t think anyone said a word. He also refused to look directly into the camera, and this was a cover shoot! Here, another image, equally unpublished, from that shoot, in which I had Terence channel Brando’s outlaw biker in The Wild One. An appropriate guise.

This is a photo I made for George Michael’s first cover shoot for Rolling Stone. This photo appeared in the inside spread; the 1988 shoot marked George’s debut as a significant solo artist after his separation from Wham! George was just coming off a monster hit, “Faith,” and the hand gesture I conjured up for this image was meant to indicate a sense of faith – sort of reaching for something “beyond.” It’s a real, in-camera double exposure, not a darkroom or retouching trick. That means I had to run the same roll of film through the camera twice, one with his face and hand in silhouette against white, and then a second time, his face straight-on shot against pure black. Naturally, this is all pre-digital photography, so aligning these images was just a guess. Lucky guess!

By the early 1990s, beloved pop star Brian Wilson had been through a lot. Substance abuse, mental illness, issues that simply weren’t talked about much at that time, least of all in regard to cultural “heroes.” In 1990, a purported memoir called Wouldn’t It Be Nice: My Own Story appeared. Controversial and possibly authored by someone else, nonetheless, the public was fascinated. I was fascinated, too, with this man’s face. The face of a survivor. Pop stardom can mean different things to different people. It can elevate. It can also destroy. Dangerous territory. I could see all of this writ large on the face of this amazing artist, and that’s what I wanted to show. I decided on lighting that would enhance the effects of time and trouble, rather than erase them with some kind of “cosmetic” effect. I shot Wilson with the 8×10 camera against a black backdrop wearing a black sweater with the collar pulled up to isolate the face, giving him what I hoped was a sculptural and epic moment. Unforgiving? Poetic? There is beauty in decay.

Mikhail Baryshnikov was indeed a rare figure in 1980s pop culture – a serious artist, classical dancer, choreographer, Academy Award–nominated actor and all-around star, and one of the most significant cultural figures to defect from what was then the Soviet Union, citing issues of artistic freedom. Baryshnikov was unusually well-known to people outside of the dance world, a hero, especially to artists and pop stars, hence his appearance in the ultimate pop-culture “Bible” of all time, Rolling Stone. In 1986, Baryshnikov became a naturalized citizen of the United States, and I chose the double-exposure concept to communicate the many dualities of this fascinating man. East/West. Artist/pop-culture figure. Hero to some, but perhaps not those in Russia. This was a true in-camera double exposure that I accomplished using two exposures on the same sheet of 8×10 film; it’s not a darkroom trick.

This photo actually came at a slightly controversial time for Wendy and Lisa, the most talked-about members of Prince’s original band, the Revolution. Rumors were flying that Wendy and Lisa might be a couple, not just bandmates. It’s important to realize how different that time was in regard to celebrities’ sexual or gender orientation. I decided to portray them in a style reminiscent of Josef von Sternberg’s movie Morocco, which starred Marlene Dietrich as a cross-dressing nightclub chanteuse. And of course, the real trailblazer in playing with gender identity would be the great man himself, Prince, known for wearing women’s lingerie onstage. Celebrity, cross-dressing, questioning gender display, all part of life now. But risky business back then.

Actress Andie MacDowell, then and now one of America’s most beautiful and talented women, had just recently given birth, so when we met for this shoot, she was a bit nervous about exposing her changing body. We decided to take inspiration from one of my favorite artists of the Belle Epoch, Alphonse Mucha, and one of his early 20th century panels, “The Seasons.” I’ve always looked to the past for a comment on the present, and still do. We used the colors, the feminine body pose, and the idea of rebirth from Mucha’s work to guide our shoot. Although it looks like body painting, Andie’s wardrobe consisted of nothing more than a Chanel scarf and some warm water to make it stick to her skin. Courageous Andie!

I’ve always tried to give a conceptual angle to my portraiture, even if it wasn’t immediately obvious to the viewer. If I could, I wanted one of my magazine portraits to be a moment of entertainment in and of itself. This shoot took place during the heyday of Twin Peaks and took direct inspiration from Sherilyn Fenn’s femme fatale character, Audrey Horne. Audrey was a sex symbol for a massive audience in the Nineties, and the scene where she knots a cherry stem with her tongue instantly became iconic. Perhaps obvious, but we had to give fans another taste of that unforgettable moment.