Photographer Daniel Kramer had barely heard of Bob Dylan when he was booked to shoot the singer at a studio in Woodstock one day in 1964. "I was only supposed to have an hour with him, but I ended up shooting for five," Kramer remembers. "A few weeks later, I brought the prints to his management office. Bob walked around the table where I laid the prints out, then looked at me and said, 'I'm going to Philadelphia this week. Would you like to come?'"

Dylan loved Kramer's work enough that, between August 1964 and August 1965, the photographer shot the young folk singer about 30 different times, playing a big role in shaping our image of the budding superstar. Kramer's most famous shots appear on the covers of Dylan's twin masterpieces from 1965 – Bringing It All Back Home and Highway 61 Revisited – but some of the best are candid and quiet: Dylan backstage with Joan Baez, goofing around in Manhattan with his buddies, playing chess in Woodstock. 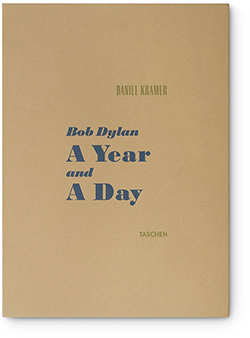 Now, Kramer has assembled a new book, A Year and a Day, which mixes many of his most iconic images with unseen photographs from his vast archives. Some of the most interesting of the previously unpublished shots show Dylan reinventing his sound, recording his first electric music at the sessions for Bringing It All Back Home in 1965. "People always say that Dylan went electric at Newport in the summer of 1965," says Kramer. "Well, not to me he didn't. I saw him go electric that January while it was still snowing. It was incredible the first time 'Maggie's Farm' came out over the speakers. Very exciting."

A Year and a Day is almost 300 pages long, but Kramer says he still has many Dylan photographs that nobody has ever seen – and it well might stay that way forever. "You have to take 10 pictures to get one good one," Kramer says. "The rest is snapshots, junk. They're repetitive. Many I haven't even scanned. There will probably always be other pictures."

A game of chess with Victor Maymudes at Bernard's Cafe Espresso, a favorite hangout spot in Woodstock, 1964. One of many unpublished outtakes from the day that produced Kramer's classic photograph of Dylan at the chessboard.

Bringing It All Back Home album cover shoot with Sally Grossman, Woodstock, January 1965. This never-before-seen frame, along with other rare outtakes from Kramer's cover shoots with Dylan are published now for the first time.

On the road from New York City to Buffalo with Joan Baez, November 1964. An important collaborator early in Dylan's career, Daniel Kramer photographed the two extensively, from their infamous joint performances to relaxed moments between shows.

Bob Dylan and Daniel Kramer photograph each other, Woodstock, March 1965. Kramer had a backstage pass to both the private and public Dylan in the seminal year he became an international superstar. A Year and a Day includes over 100 never-before-published photographs, including this one.

One of several rare unpublished photos of Dylan on Fifth Avenue with Peter Yarrow of Peter, Paul and Mary, and guitarist John Hammond Jr., two of Dylan's frequent collaborators in the mid-1960s. New York City, January 1965.

On the first day shooting Dylan in Woodstock, August 27th, 1964. "Dylan told me that the pictures I wanted wouldn’t work out," Daniel Kramer recalls. "Instead, he suggested I photograph him on the swing. His mood changed when he stood up and he pumped the swing higher and higher."

Soundcheck before the show, Forest Hills Tennis Stadium, Queens, New York, August 28th, 1965. A staggering 14,000 people came out for Dylan's now-famous concert at Forest Hills. Daniel Kramer reflects, "It would culminate in what he had been doing with his music for the past half year – we were about to get the big bang."